Not so daft sheep and who was Lady Catherine?

Not so daft sheep and who was Lady Catherine?


To be honest I didn't expect much from the Dava Way. I had suggested doing it more for exercise during a pandemic that wasn't too far from home than for any great enjoyment it might offer. But I was mistaken. The section from Grantown to Dava is an attractive and interesting route including woodland, farmland, a rocky gorge, wide open moor and a Red Coat who looks like he might be related to the Wee Minister on the approach to the Grey Corries. Not dull at all, which is what I'd half expected.

We started in the centre of Grantown, headed north and passed the caravan site to join the signed path for the Dava Way which led up to the old railway line giving views of mist lying over the town towards the hills beyond. 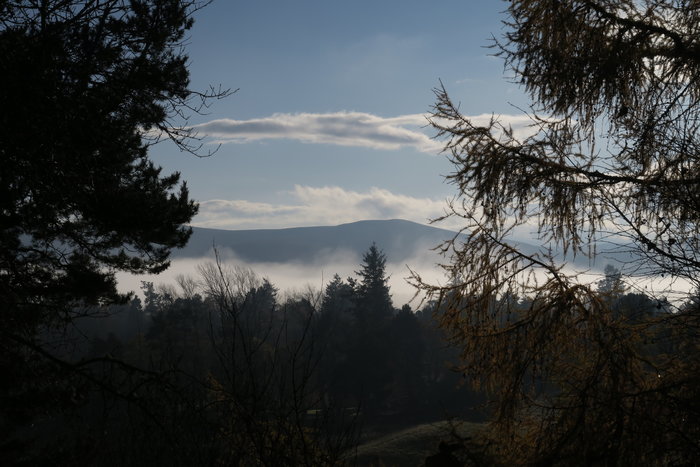 View south to hills of Cromdale That elevated section along the embankment was the only part of the path not so easy for cycling. After we approached the railway cutting the rest of the track was very level. We met two groups of cyclists on the route but no other walkers, just two locals out for a dander at Lady Catherine's Halt. Dog with bat face as ears inside out with running 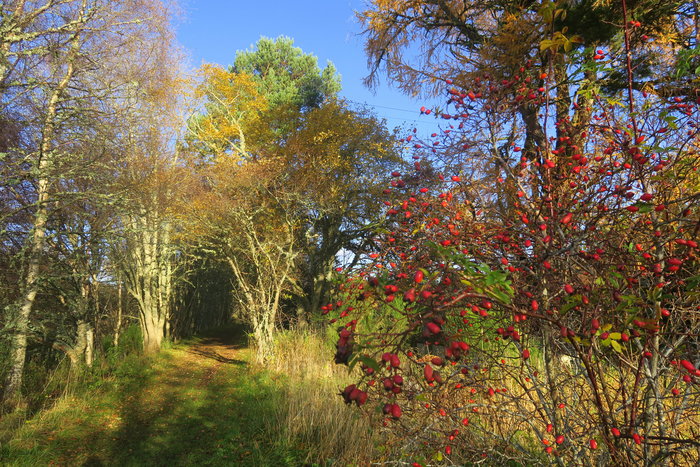 We paused at Castle Grant East Lodge to read about Lady Catherine's Halt. The deal was that in return for allowing the Highland Railway to be built across his land Lord Grant would get an ornate gateway to his estate and a private halt for himself and his guests. The halt was designed so the lords and ladies of the estate could transfer directly from the train through the building to a waiting horse and carriage, with minimal exposure to the weather. The railway was opened in 1863 and provided the first through service by rail from Perth to Inverness. The 36 miles railway from Grantown to Forres crossed Dava Moor and was prone to snow drifts in winter. It was closed in the Beeching cuts in 1965.

Who Lady Catherine was I do not know but she got the railway halt named after her and for that reason her name will be brought to the attention of everyone who walks the Dava Way, which on the day we did it was admittedly very few. But who was she? If this is the gatehouse lodge the castle must be pretty impressive. 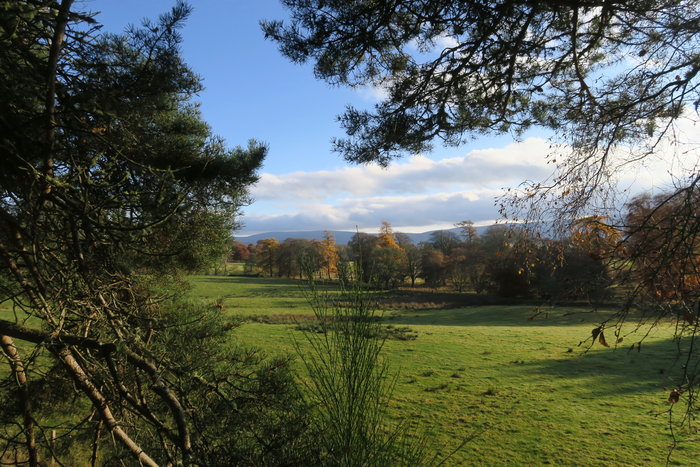 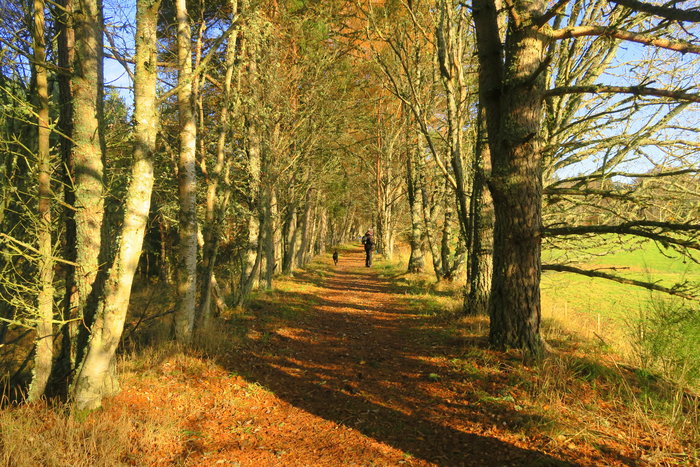 Parallel to the track the Allt an Fhithich runs from Dava Moor down through a wooded gorge. A muddy path leads down to the right to a rocky platform high above it. Rock climbers use this path to reach Huntly’s Cave crag and there are stories of various inhabitants of Castle Grant taking refuge in the cave in the 14th and 17th centuries. We took the short detour for the views of the gorge and as a stop off point for a sandwich. There is a precipitous drop into the gorge and the rock was damp so we didn't go too near the edge and kept the dog on the lead. But it was a fine stop for a sandwich. 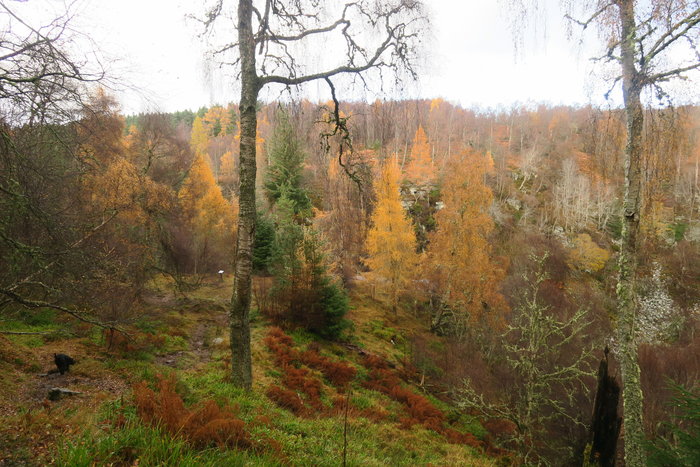 Good spot for a sandwich 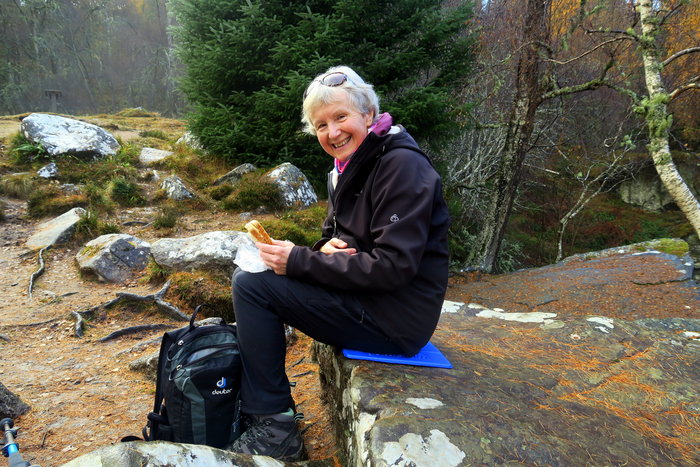 Returning to the track there was another railway cutting before we were out on the open moor. The Dava moor has a reputation for desolation and bleakness in bad weather but was a delight when we were there in the low autumn sun. We hardly felt we'd climbed at all so it was a bit strange to reach a summit sign telling us we were 1052 feet above sea level and from now on it would be downhill all the way to Forres. On the moor the Dava Way is fenced on either side with occasional swathes of gorse but otherwise open views. Having a dog I always have an eye open for sheep on hillsides so I can put her on lead to avoid any problems. At this point the landscape looked bare with no sign of life, not even a bird. Then suddenly from the gorse inside the fence out jumped four sheep and almost collided with us. I'm not sure who was more shocked, them or us! They darted about in sheep like fashion before realising they were trapped in a fenced corridor and set off along the track in the direction we were heading. They'd have done better going the opposite way to us but being sheep they didn't twig that.... though we found out later there was method in their madness.

Keira's instinctive reaction was to chase but in a matter of seconds she responded to the whistle and I put her on the lead. I say this as a heads up to other dog walkers. It's not your or your dog's fault if it runs after sheep that suddenly jump out in front of it in a place sheep are not meant to be. It's what dogs are wired to do. But if you don't have solid recall you could have a problem. Further on we noticed the fence was down, a place hill sheep looking for sheltered grazing are using as a way in and made sense of which way they ran. Forest at Dava ahead The WH directions suggest the Redcoat soldier is south of the summit sign but when we met him he had moved a bit further north. Must be in retreat. He is standing here to commemorate the government soldiers' part in the Battle of Cromdale in 1690, when they outnumbered and defeated the Jacobites, although to listen to the words of a Jacobite song from that time you would get the opposite impression! As someone who from a small child was fed stories of the Redcoats as the baddies it was hard for me to feel any sympathy for him, however down in the mouth he looked.

Redcoat to rival the Wee Minister for cheeriness The information board tells about occasions when trains got stuck in snow here, which before the days of global warming seems to have been a regular occurrence along this railway track. It is quite high and exposed up here so a brave decision to build a railway in the first place. At Forres it linked with the Aberdeen to Inverness line so it must have been considered in those days a more feasible approach to Inverness than over the Slochd, the way the line takes today.

We enjoyed this whole route and the only section where we were warned of it being wet underfoot now has a new and dry path laid.

Re: Not so daft sheep and who was Lady Catherine?

Nice timing for posting this report, I'm just home from doing the top half of the Dava Way today (Forres to somewhere between Dunphail and Dava, I then just headed back all the way to my car in Forres), hoping to get the rest done next week. Nice to see what's coming up!
I was impressed with the waymarking of the Dava Way, I was never dithering over where to go at junctions, and the information boards are nice to stop and read. Some very wet sections and some muddy sections today, but it is after a few days or nights of heavy rain, so I probably got it at its worst. Plenty of it was fine though, they've made a good job of the track overall.

Re: Not so daft sheep and who was Lady Catherine?

gld73 wrote:Nice timing for posting this report, I'm just home from doing the top half of the Dava Way today (Forres to somewhere between Dunphail and Dava, I then just headed back all the way to my car in Forres), hoping to get the rest done next week. Nice to see what's coming up!
I was impressed with the waymarking of the Dava Way, I was never dithering over where to go at junctions, and the information boards are nice to stop and read. Some very wet sections and some muddy sections today, but it is after a few days or nights of heavy rain, so I probably got it at its worst. Plenty of it was fine though, they've made a good job of the track overall.

I agree. It's an excellent long distance route and one of the best I've been on (minus the spectacular scenery of the WHW).