Having discovered Walkhigjhlands a couple of years or so ago I've found the walk reports an invaluable source of information and the photos an excellent aid to help me visualising my routes. Well, it's about time I gave something back and got into posting reports of my own. So here goes with my first post (I just hope the photos upload ok!!).

Perhaps Dubhchraig and Oss might not be considered as top choices by some for a first post. Luckily the weekend brought good weather and excellent views ........ much better than on my attempt at these two hills the weekend before when the weather got the better of me and the photographic evidence now suggests I was closer to the summit of Dubgchraig than I could ever have imagined (Aaarrrggghhh!!).

Parking up at Dalrigh on Sunday morning though and the views of Dubhchraig were superb. It looked like MWIS had it spot on with the forecast. I already knew that the walk up through the forest was going to be a 'bog trot', having been here just a week earlier. Luckily such inconvenience isn't enough to put me off and despite the state of the 'path' the forest is a lovely place to walk. And the views opening up behind me were enough to compensate as well. Once through the forest the walk up into Dubhchraig corrie was no more than a steady, if uninspiring trudge. Once you get closer to the ridge though things definitely do improve. Reaching the foot of the ridge there was sufficient icy snow to convince me crampons might be necessary, so it was chance for a short break as I got them sorted. Then it was onwards and upwards. At which point the wind speed seemed to increase with each stride. Just a little from the summit there was a small dip in the ridge. The wind was fleeing through there, shifting the snow. Reminded me of images of shifting sands in the desert - albeit this was a frozen desert I was standing in. Unfortunately the picture didn't really do the effect justice. Looking back as I headed up Dubhchraig gave me good views of the mighty Ben Lui. Definitely one for another day. 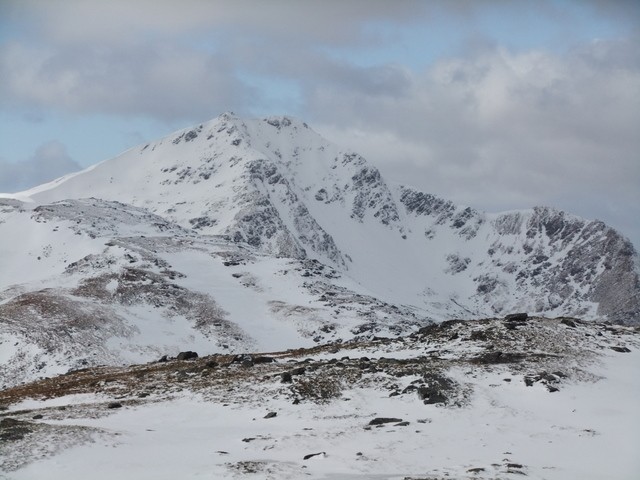 And in no time at all I was on the summit By this time the wind had picked up considerably. I took the opportunity to take the obligatory photos and a short (if diappointing) video clip so l could shock the missus with the wind speed. I had hoped to get a bit of shelter from the sumit shelter, but the snow was being whipped up all over the place, so while I was taking a short break for a bite to eat the snow was getting in everywhere.

But then there was my (miss)adventure of the week before on this hill. When I had started that walk it was cloudy, but didn't look too bad from the car park. I had been encouraged by a prty of walkers doing the same hill and so had continued into the mist and on to what I hoped would be the summit. But with a complete snow covering and thick, thick mist I made it to what I thought was the summit plateau, but had no sight of the large cairn I was expecting. So, not wanting to get into difficulty decided the best course of action was to head back down and come back to do battle another time.

But not before I took a handful of photos of the whiteness. Little did I know just how close I was to the top. Couldn't see then what I saw when I compared pictures from the trips. Can you see what I see hiding almost out of shot? Anyhow, this week it was a shortish stay on the top given the wind speed and off to the next destination ..... Oss. I had read that the decent from Dubhchraig to the Oss bealach was steep, but overall it didn't seem any worse to anything else I had done. After that it was an initially steep plod on the ice to the 941 top and then on up to the summit of Oss. A nice steady plod with Lui to my left. No real complaints from me. 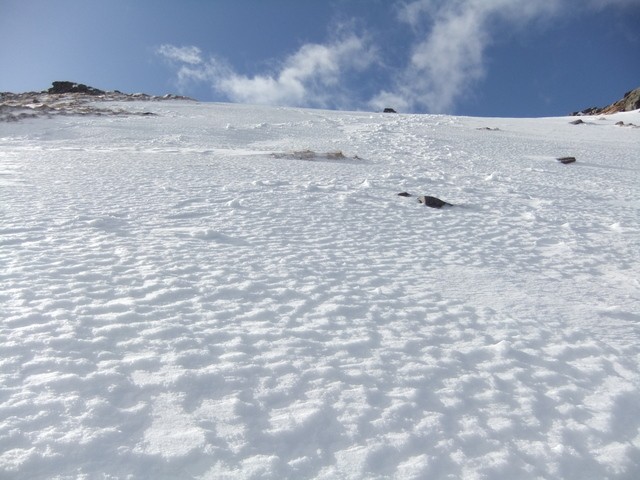 On decent I opted to avoid the 941 top as I wasn't convinced I wanted to come down what I had early gone up. So I opted for the grassy slopes to the right. This day this route was full of snow ands made for a much easier decent. Before long I was back at the Oss bealach. And another decision. Do I climb the 250 feet back to the Dubhchraig locahans and back down into the bog? Or do I drop of from Oss into Coire Buidhe? A quick look at the drop and it looked steep to me....and none to inviting with the mixture of snow and boulders. But the look at a 250 foot re-accent decided me and into the Coire I went.

And it was steep initially. But it soon eased and turned into a pretty decent romp down to Cononish.

One final hurdle was fording the river itself, which led to a bit of a wet foot, but hey-ho it had been a good day all in all and I wasn't overly bothered with that. It was then the long walk back to the car park and the drive home.

But not until Lui invited me back for another trip on another day. Some great photos, It's a long walk up to Beinn Dubhchraig ain't it, I thought I was never going to get there.

Great 1st post and a good day you had for it

Were you really that close to the cairn on your previous visit?

Well, looks like it was no hardship coming back for the return visit in better weather. Love the 'strong winds' photo, I can imagine what it was like.

And you've saved Queen Lui for another day, good decision I think, I recommend walking in from the east up the glen for the approach views (and do it on a good day!).

I've been on Lui but not the surrounding hills yet.

I'm amazed at the amount of snow , has there been some in the past few days?

Excellent first report PeteR. I really enjoyed these hills when up last year and it's great seeing them in the snow. I'd concur with yokehead - the Cononish approach to Ben Lui is lovely especially when you come round a corner and it just seems to appear majestically in the distance.

Great report and some cracking pics, love the colour on the first one

That's a great report, haven't done these two yet but on my to do list. I, like you, have really enjoyed reading others reports and posted my first one last week as well. Great pictures.

hi peteR nice report with great pics, are you trying to make me jealous ?