DAY 1
Drove to Forres and started the walk from the start of the Dava Way trail at Mannachie Avenue rather than in the town centre - December days are short and I was going to be doing the walk return, so the extra mile through houses didn't appeal. My vague plan originally was to walk the Dava Way over 3 separate days, each of the 3 legs done return to save trying to work out awkward public transport options. The flat, well-signed route meant I was able to cover more distance than I thought though seeing as I was walking at a decent pace, so I did pretty much half of it on this first day, continuing past Dunphail and onwards past the viaduct, before heading back the same way to get to the car while there was still some light.

The route is very clear; at any junctions where the track was going through woods or diverting from the clear route of the old railway line, there were marker posts clearly showing where to go. Information boards at some points too were interesting to read. There had been a lot of heavy rain recently and though much of the track was good, some parts were very wet and muddy. I was glad I'd worn hiking boots rather than shoes or trainers.

It's a nice walk, but no real outstanding views or anything - going over the Divie viaduct is good, but it means you don't actually see the viaduct itself from the side or below unfortunately. 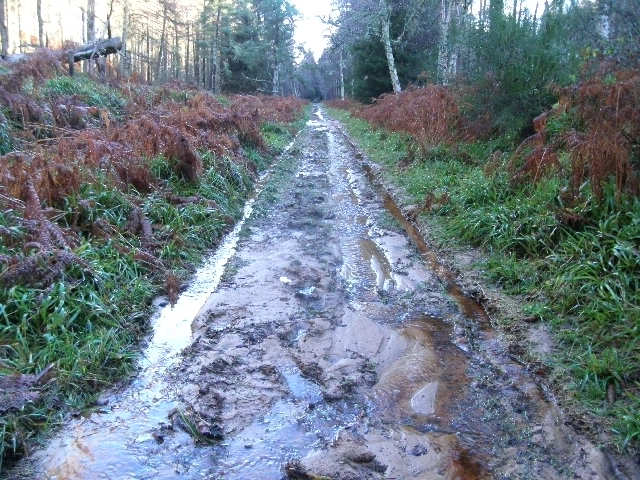 ...but plenty sections are good even after heavy rain Picnic area and info boards at Dunphail. (This is where I'd expected to turn around, but I continued to do half of the next section this day as well) 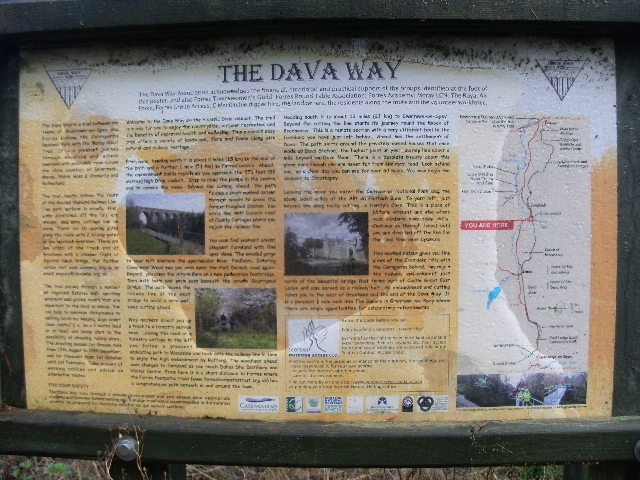 These big information signs about the route are at a handful of places along the Dava Way where people might start it from (e.g. car parking is nearby). They are specific to that point, giving a summary of the route and distance both north to Forres and south to Grantown on each one, in addition to the "You are here" on the map (this one between Dunphail and Dava)

DAY 2
Parked in Grantown-upon-Spey near the Co-op, donned waterproofs as it was light rain when I started, and set off to do the bottom half of the Dava Way - again doing it return so having to do a pretty constant brisk pace to make sure I was back before dark. Again, the route was well signed and pleasant, if not spectacular, scenery. I got lucky with the weather; it had been forecast to be windy and showers all day, but other than light rain at the start, it stayed dry the rest of the day. The wind was only noticeable across the Dava Moor, not so much on my way out as it was at my back, but when I was heading back south I could feel I was walking into it and was glad not to be up a high mountain with it ten times worse. Despite the wind, my out and back times were about the same as I stopped to read all the information signs on the way out and just walked without a break on the way back.

The moor was probably my favourite part of the walk - it felt bleak and remote despite the nearby main (but not very busy) road. If I'd been doing the walk over 3 days instead of 2 I'd have taken a detour up the Knock of Braemory, but no time today and I'd just been up it a few weeks ago anyway. No snow in my photos, but this house in Grantown passed on the way from the town centre to the trail path shows it was December! More clear signage for the route Atmospheric now, but I wouldn't have fancied being in the workforce having to make these railway cuttings Lady Catherine's Halt. Castle Grant remains hidden on the walk, asides from glimpses of the tops of turrets or towers This was as muddy as it got on the second day, nothing bad Crossing the Dava Moor the high point is reached, though the gradient isn't noticeable. If it wasn't marked, you wouldn't know you were at the summit! The route across Dava Way doubles as an estate track, but all quiet today I was so used to the solitude of the walk that I actually got a bit of a fright when I saw this guy, don't know how I didn't spot him from a distance! Knock of Braemory between Dava and Dunphail, would be a nice detour on a longer day

Not surprisingly for midweek in December, I didn't meet many other people on the Dava Way - asides from 1 couple I talked to doing the Grantown to Dava section with a car at each end, it was mainly joggers and dog walkers on the sections very close to Forres and Grantown that were the only people I saw on it. Doing it in summer with plenty hours of daylight it would certainly be do-able in 1 day, but for me it was a nice local winter option to do over 2 days.

Re: Dava Way over 2 days, done in both directions

Thanks for that, really enjoyed the report. I did the Dava Way a few years back and it was nice to see it again in pictures.