Route description: The North Face of Ben Nevis and the Allt a' Mhuilinn 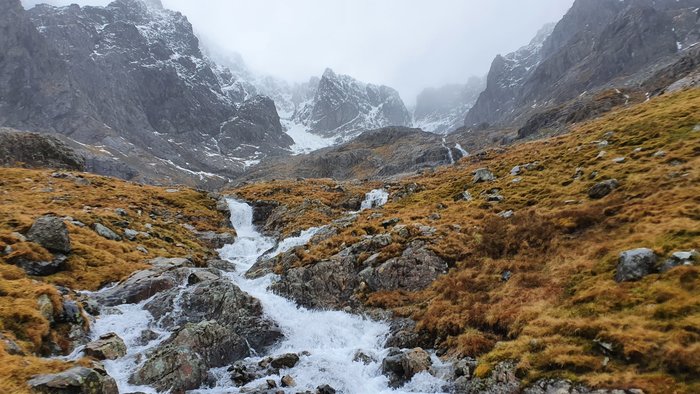 A last minute plan to get out on the hills in the west saw me arrive at the North Face car park at 10.30 am. I had a general idea that the forecast was poor and the chances of getting to the summit of the ben were very poor but I needed to get out and this is an area I know well.

Ominously the car park was deserted 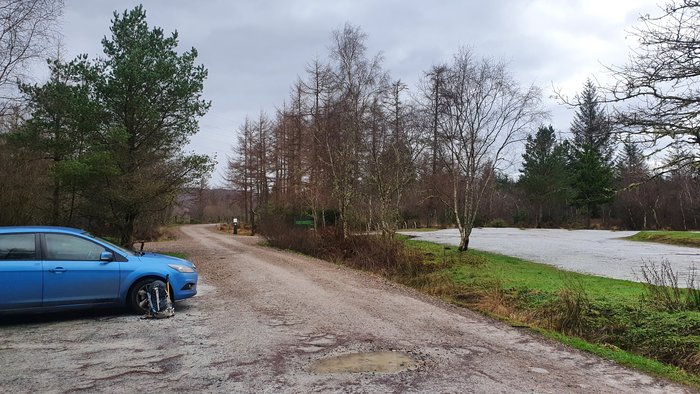 I had no clear plan which is a bit like the story of my life but this is the route I ended up taking.

New_Route (23).gpx Open full screen  NB: Walkhighlands is not responsible for the accuracy of gpx files in users posts

The river was going to be a major obstacle so I crossed it early at the bridge and went up the west bank. I'd ruled out the summit of the ben at this point due to the wind speed, the driving rain and the lack of daylight though it probably would have been possible. The target now was Melantee. It's not a popular hill due to its illustrious neighbour and it's not on a list, but well worth a visit, a great winter hill.

Another obstacle passed - Carn Dearg as the backdrop 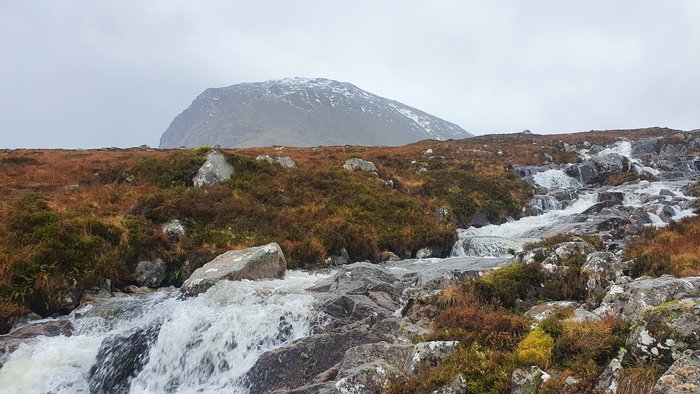 It's not a bad climb from the NF car park to the summit of Melantee and took me around 2 hours though I did get blown off balance at one point. 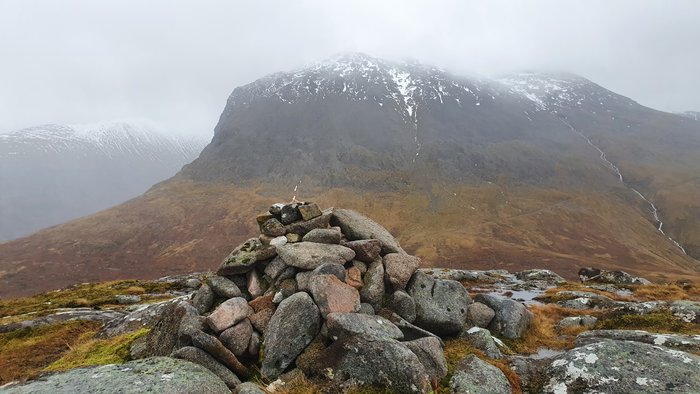 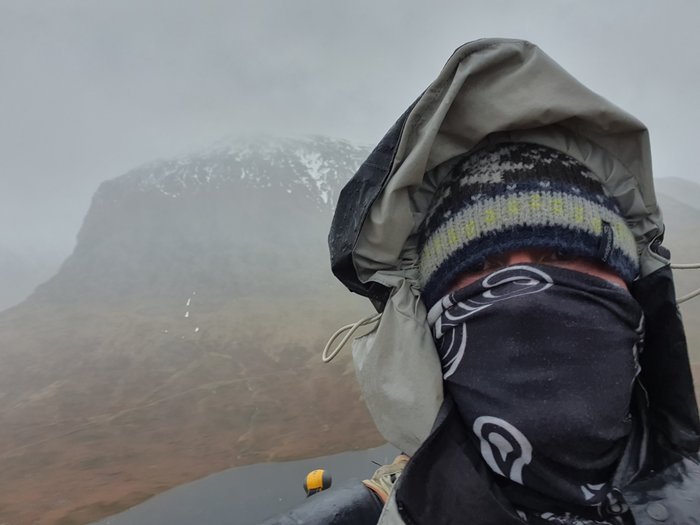 Looking down one of these gullies that you see from Glen Nevis and wonder if it's a good route up....... ok maybe that's just me.
Glen Nevis Youth Hostel 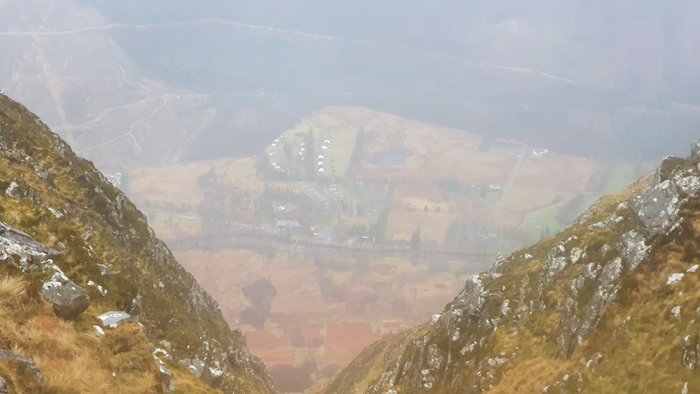 I dropped down off the ridge on to the ben path. Though I have been on the ben every year since, this is the first time I've been on this section of the path since November 2014.

It's now 12.45 on this Friday afternoon and not a soul to be seen on the pony track, I hadn't seen anyone on the zig zags either from up high, just goes to prove highlanders generally aren't daft enough to go out in weather like this though there is the odd exception. 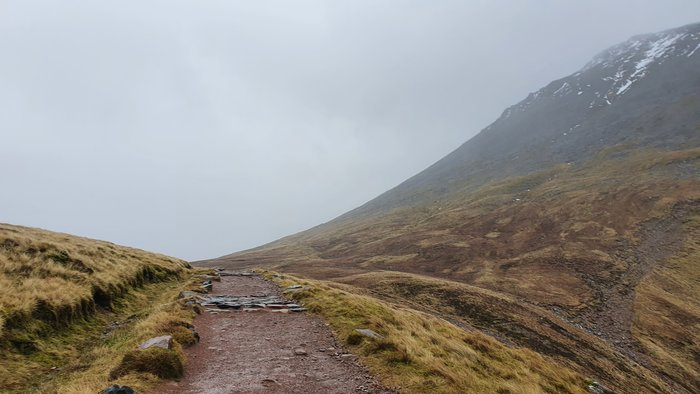 It was still early enough and I was tempted to go for the summit and get far enough down before the loss of light. The snow line was well above 3000ft but the weather conditions were an unknown so instead I went round to have a look at the north face. Another dilemma was I might not be able to cross the Allt a' Mhuilinn and have a rough walk down the left bank instead of the fantastic path on the other side but I was happy to take the chance and luckily the burn was crossable with care.
The Wild North Face 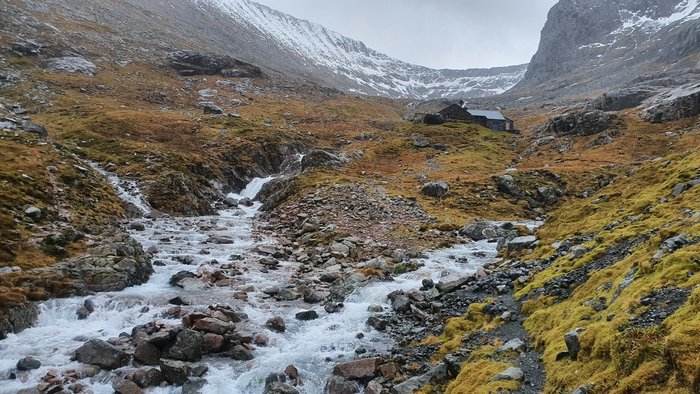 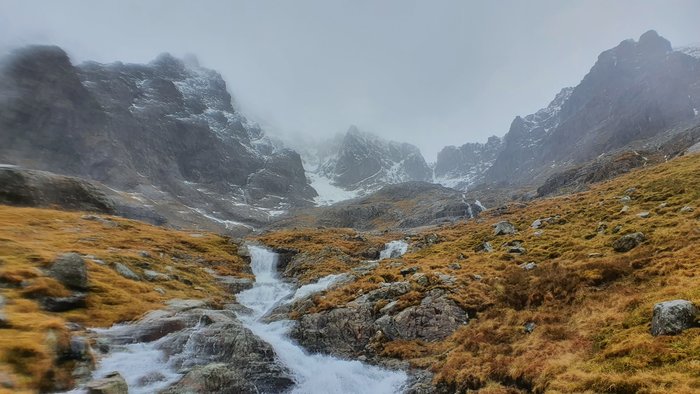 It was difficult to get half decent photos with the rain but it gives an idea of the conditions which were a world away from my last visit in august. These 2 photos are taken from roughly the same place.
Ben Nevis August 2020......... 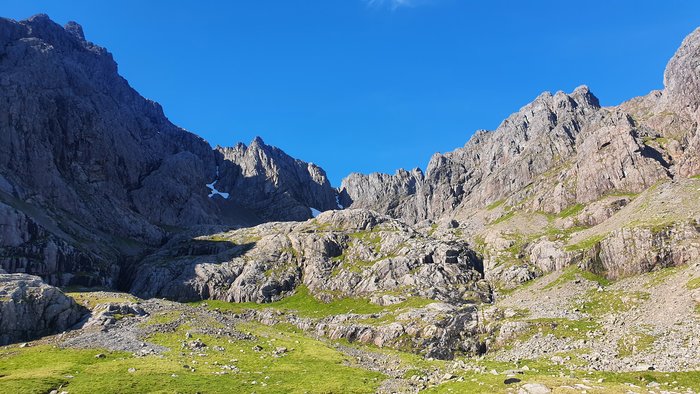 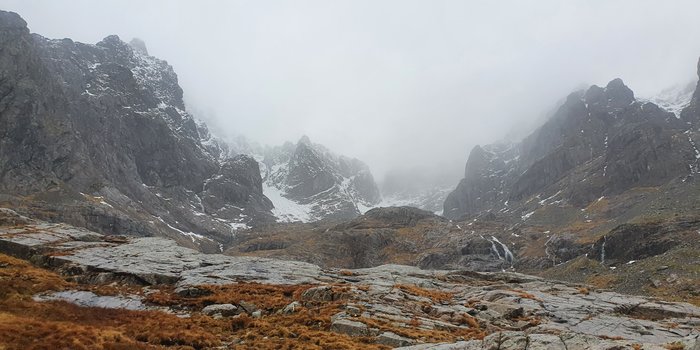 I always see the CIC hut as a bit of an eyesore with its cages, gas bottles etc. but it's a great resource for the folk who use it and having a look in the window........
.......... they definitely have their priorities right! 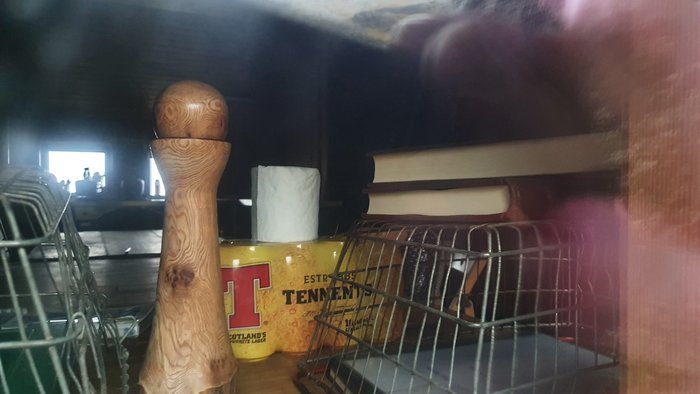 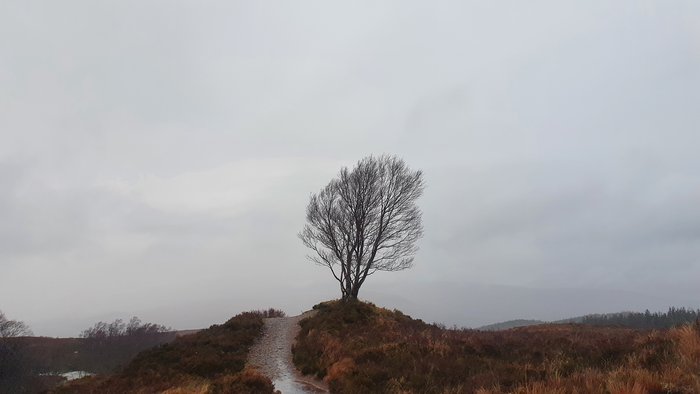 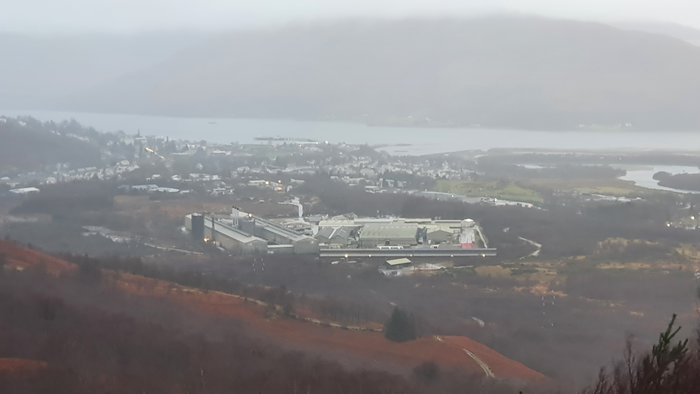 There are very few reports on WH for this hill and quite hard to find (though I know Weaselmaster has done a report for it)
so for anyone who fancies it this is a good ascent route away from the crowds with many possible variations.

What a great route and idea for a walk in more challenging weather. The photos of the corrie really show how spectacular it is. I was just reading and looking at some reports/images on the most difficult sections of the GR20 in Corsica then read your report - those corrie photos (and a place so easily reached too!) knock for six, most of what I was looking at!

Not surprising that there were no cars at the Parking place for access to the path up to the Ben 'wild side'.

At least you were out and tasting the weather and finding a safe place to cross the Allt a' Mhuilinn burn.
The lady who replied and compared the path up to the Refuge with the GR20 apparently from what she had been reading about the traverse? The Corsican route system of paths through the mountains down the spine of the island at least does contain some scrambling .......pleasant when the weather in summer is sunny...not been there in winter when you would have a major expedition, crampons and winter gear, to face up to with snow covering the terrain and all the paths were under the snow.

Just had a look at the SAIS reports for the area over the last few days.

gaffr - no, I wasn't trying to compare the route itself to the GR20, just remarking on the comparison of photographs I was looking at (specifically of the Cirque de Soleil area in Corsica) with one or two of the photos Sunset tripper took.

Hello Anne C.....yes now I fully understand what you say.

The Range of climbs both summer and winter on the mountain is numerous and you can take tour pick from many old classics through to the very hard....some of which nowadays will have become classics

Were you intending to travel out to Corsica for a traverse of the GR20? Are you aware that the route through the Cirque de Solitude has now been divested of the chains on both sides of the descent into and re-ascent out of the Cirque all this after a very tragic event in 2015 when seven folks were swept away in a huge rockfall during a deluge. Not all of those swept away, as far as I know, have been recovered.
The route on stage four, when coming from the North, has now been re-routed from Haut Ascu and up to the Col close to the summit of Monti Cintu before descending to the refuge at Tighjettu. Now a longer in distance and with more ascent on this stage.
The guidebooks that I have for the traverse of course do not show this change to the route ( my visits to the area were in the early 2000's and in 2013 ) but I would be sure that the update books will show this change to the route.

Hi gaffre and thanks for that info - I was actually reading a Chris Townsend book in which he mentioned doing the GR20 and then I started looking up the route online, photos and such like. I noticed the tragedy with the 7 hikers - horrendous. But - no, no plans to do it.I wouldn't mind doing sections of it but I'm too much of a scaredy cat for some of the rockiest sections!

Gaffr. The GR 20 came on my radar after a flight home from Naples. It looks fantastic from the air, though admittedly I couldn't see the route from there.
Its now on the list but not at the top.
Cheers

Anne C wrote:What a great route and idea for a walk in more challenging weather. The photos of the corrie really show how spectacular it is. I was just reading and looking at some reports/images on the most difficult sections of the GR20 in Corsica then read your report - those corrie photos (and a place so easily reached too!) knock for six, most of what I was looking at!

Thanks Anne. It's a great place and yes good for wet weather day when the burns are full. Especially good on a nice clear winter day.