Meall Dubh and the threat of further imprisonment

Meall Dubh and the threat of further imprisonment

After a couple of weeks away from the hills, I spotted a weather window in the Ullapool area. Despite not feeling so great recently, Jackie reckoned she could probably drag herself up something, so I suggested Meall Dubh. We wouldn't usually bother using bikes to shorten a walk of this length but right now every little helps, so we loaded the bikes and headed off to Inverlael. 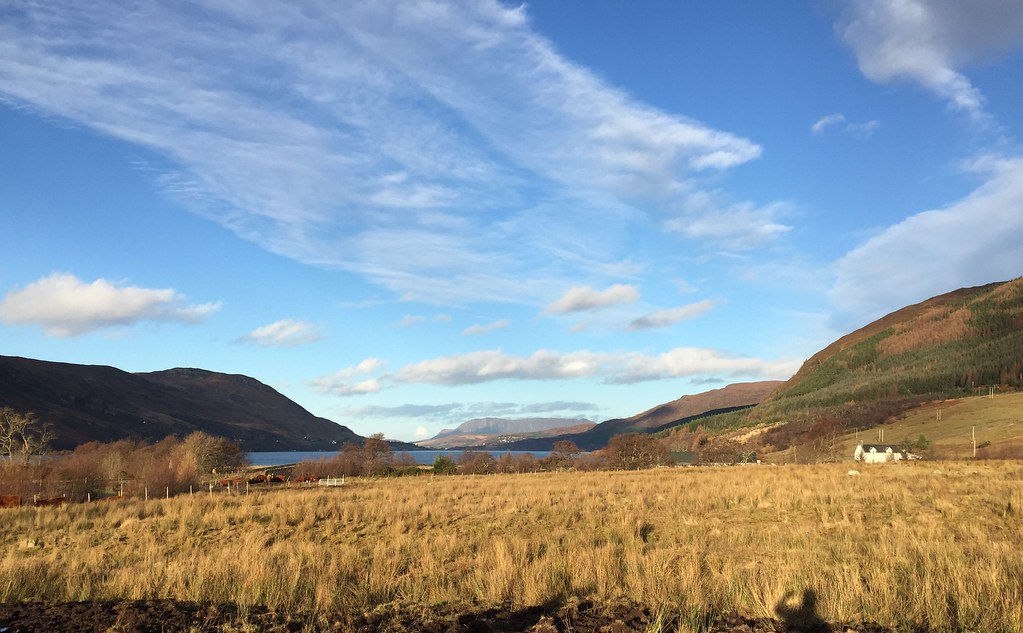 There was strong sunshine as we set off through the initial field of cows, the track becoming better and less muddy as we entered the forest. Once across the river, there was a bit of a climb next to a relatively recent hydro pipeline (buried but marked by posts), before the zigzag we had hoped to use to take us higher up revealed itself to be rough and overgrown. Instead we ditched the bikes here and headed up steeply through the trees for the edge of the forest. 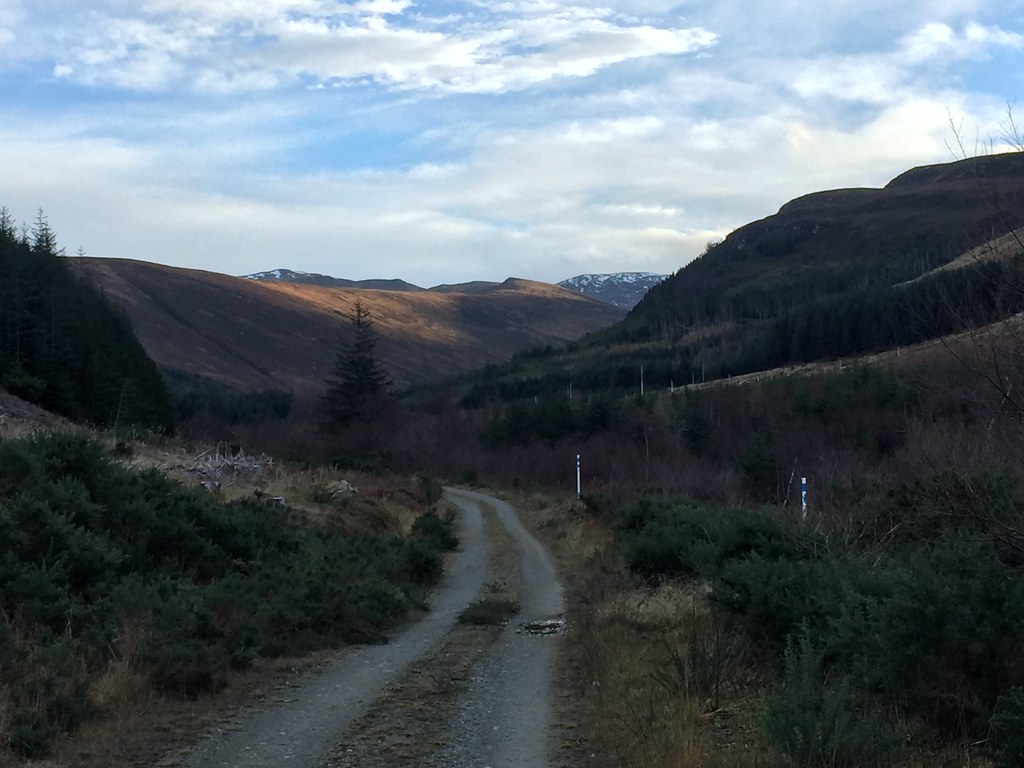 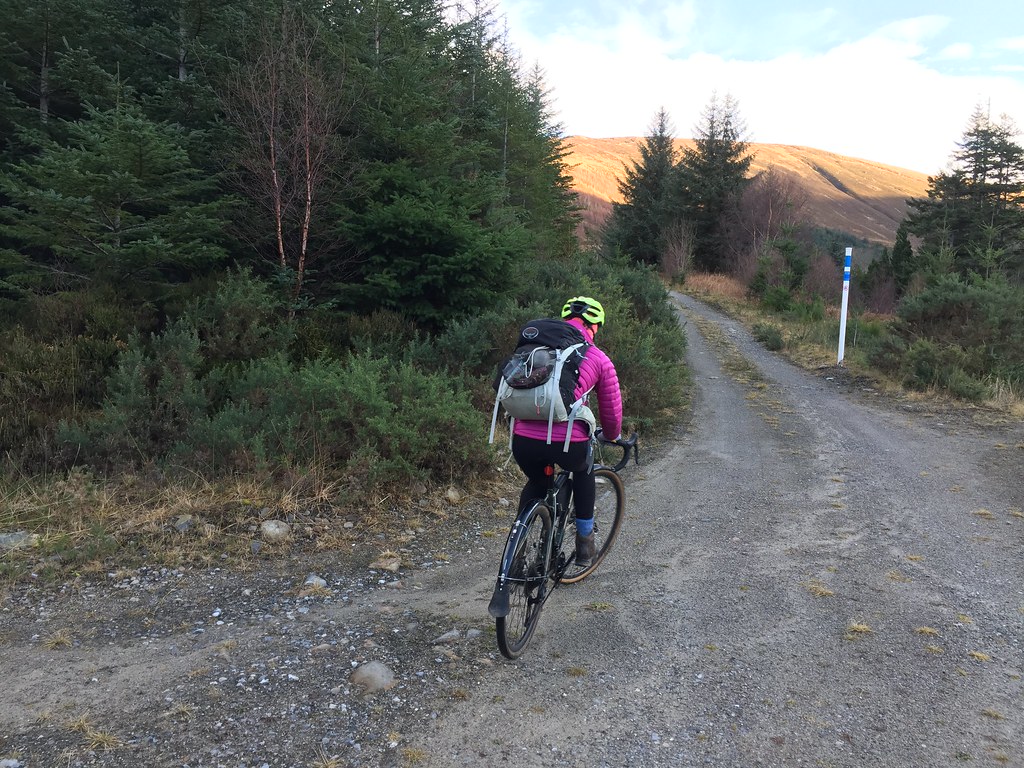 Cycling up the glen 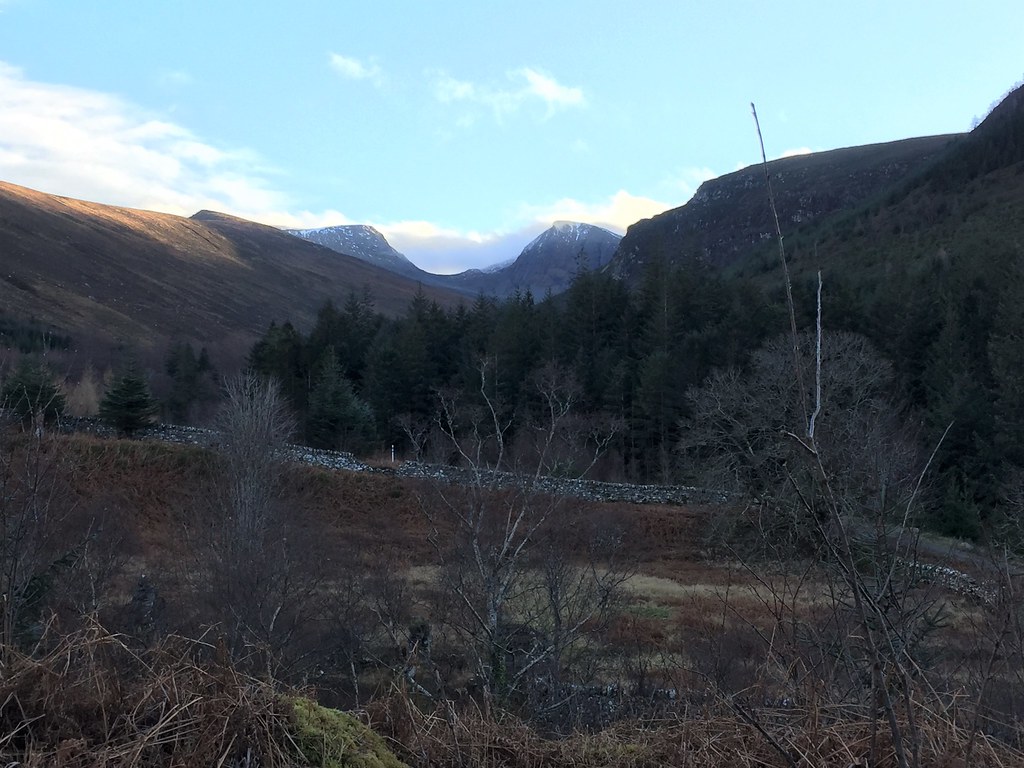 The track stays pretty good beyond the forest edge (I'd been up here before but in deep snow) and climbs steeply up to the lower plateau in this area. We hag great views back to An Teallach and across to Beinn Dearg and co. 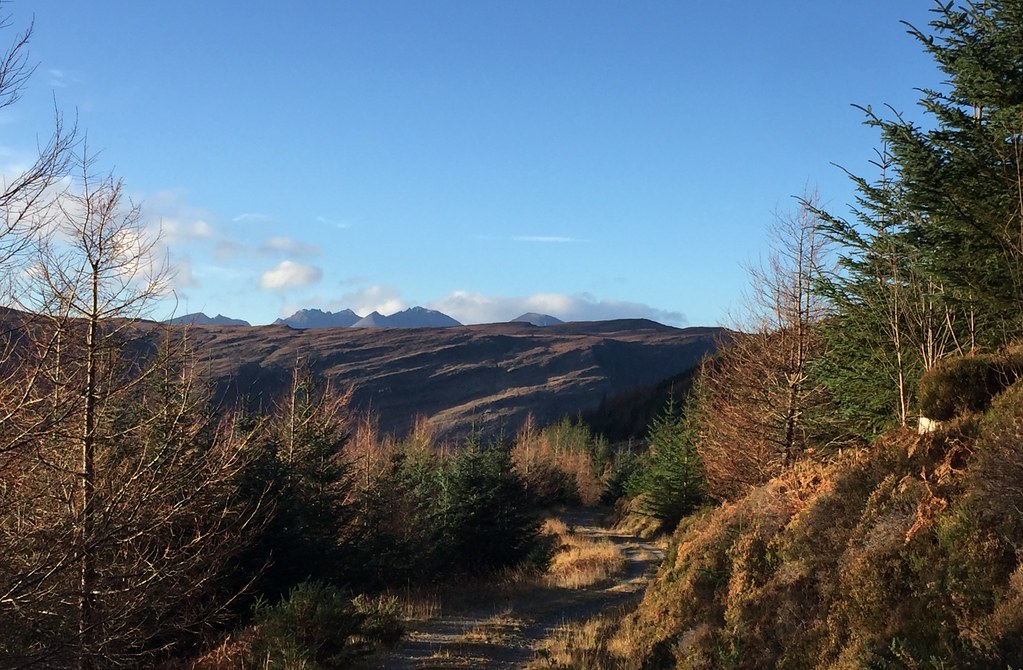 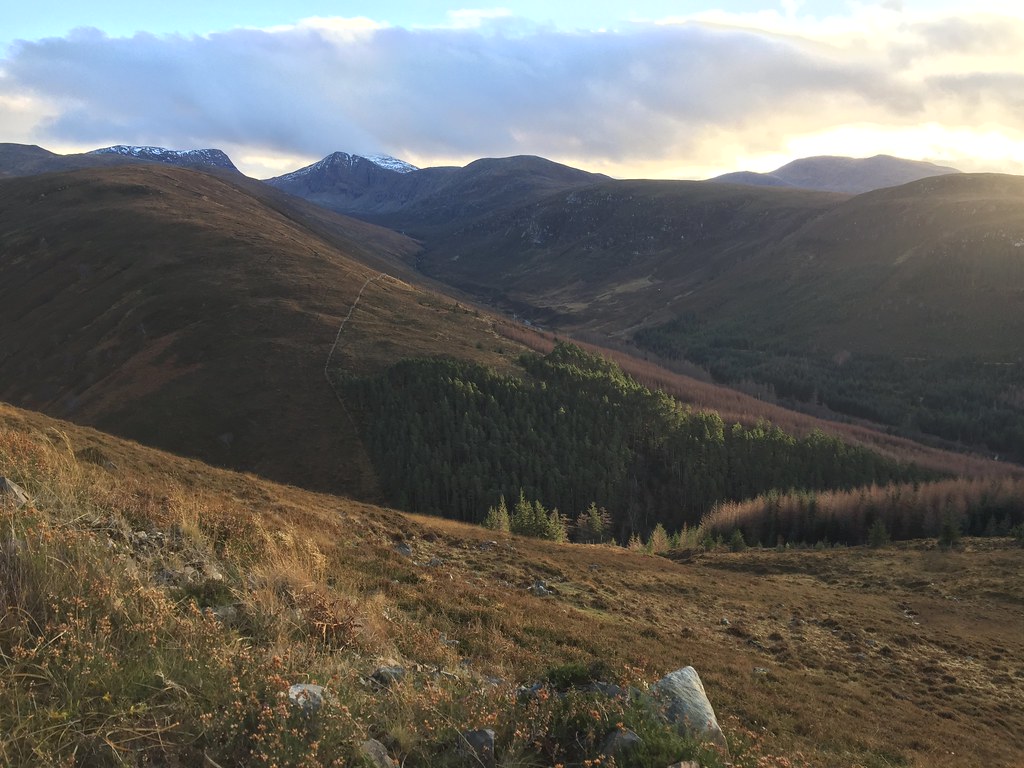 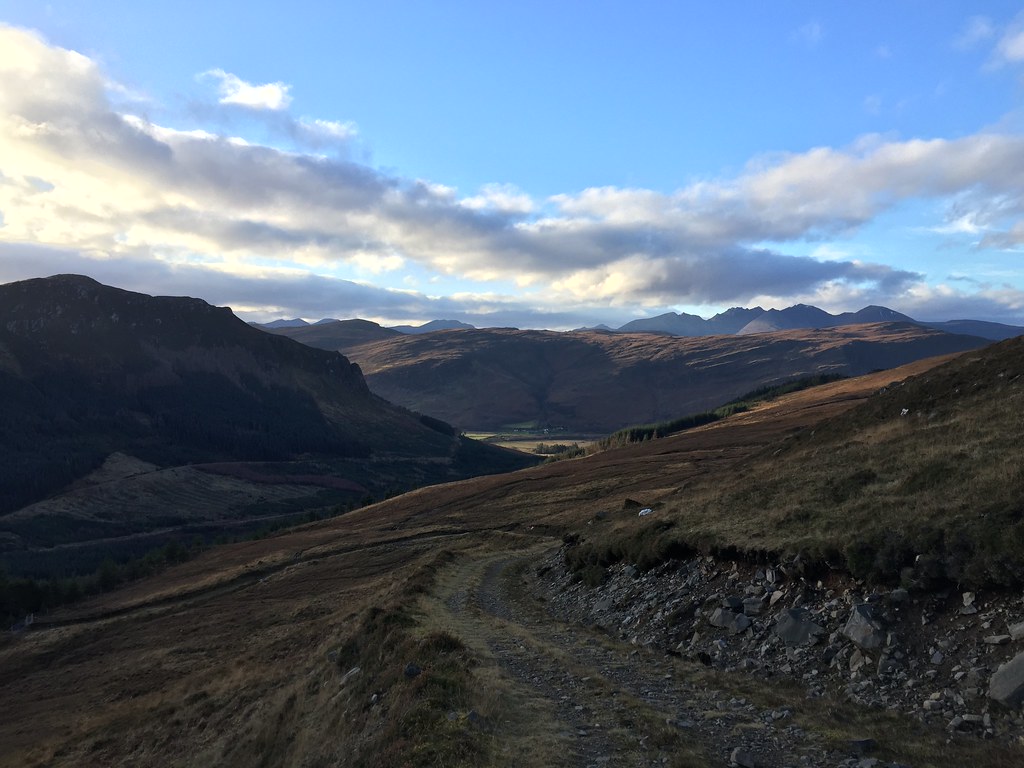 Strath More and An Teallach 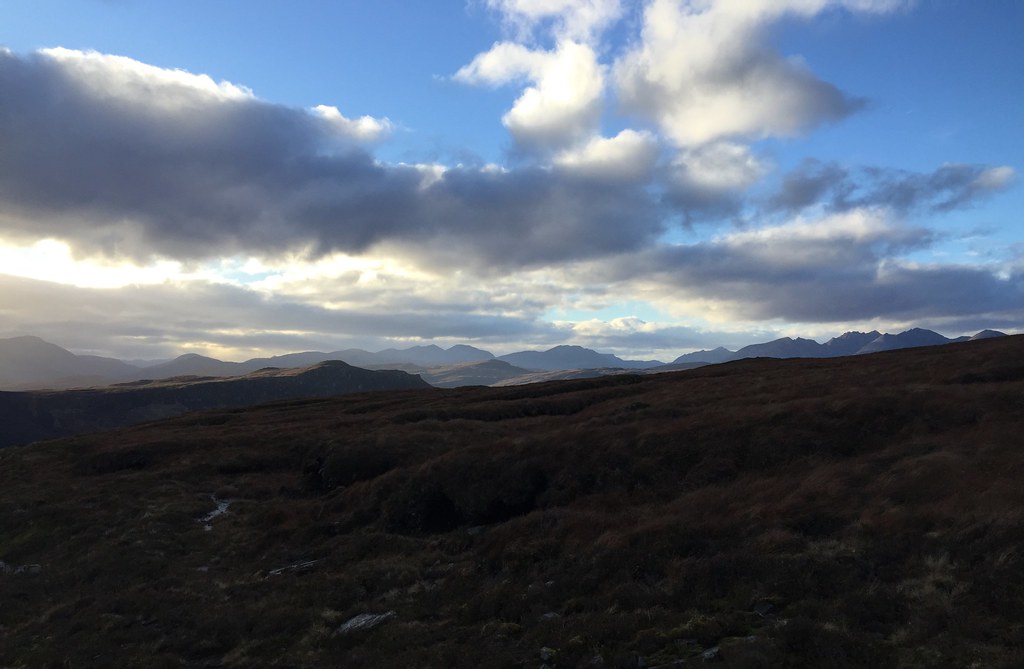 Western Fannaichs, Fisherfield and An Teallach

We decided to have lunch once we reached the end of the track - higher up was supposed to be quite breezy. A couple of herds of deer were spotted in the distance. On my last visit, the final section had been almost a white-out, so I was pleased to spot that there was actually a quad bike track to follow in the direction of the summit. In fact there were a couple going in different directions and we picked the wrong one initially. Easily corrected though. 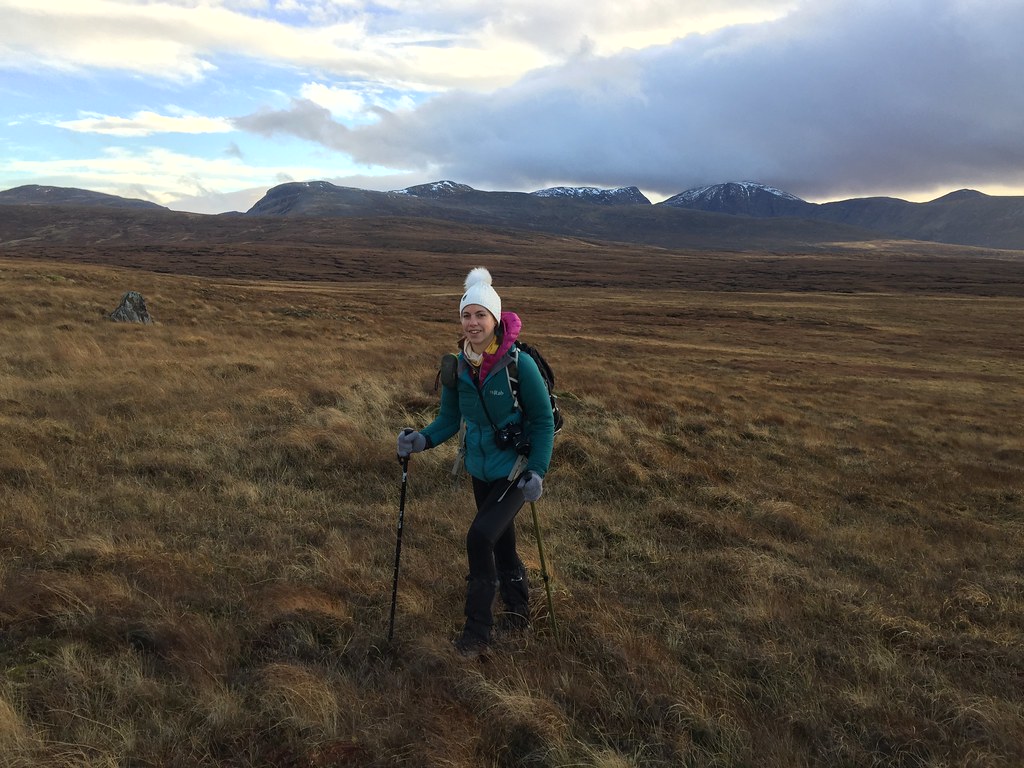 Off the end of the good track 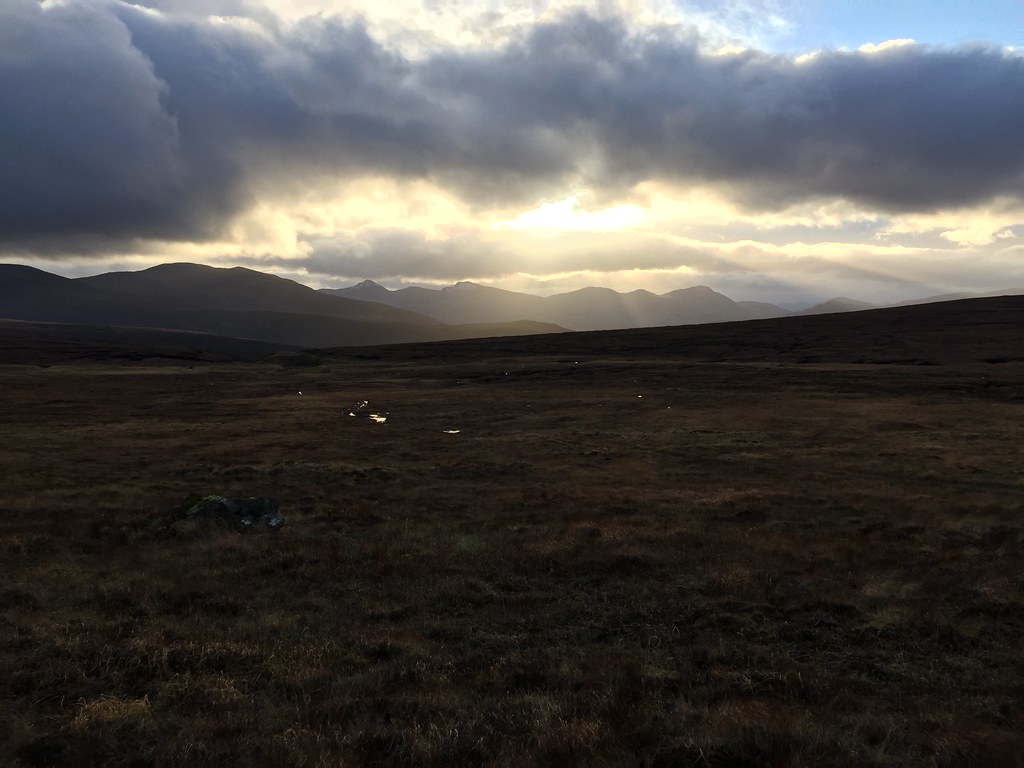 The faint track led us to the more westerly summit, which was just a flattening of the peat hags in the area. As soon as we spotted the other summit, it was obvious that it was the higher one, and very likely that on my last ascent 10 years ago, I didn't quite reach it! I had suspected that at the time, but given the lack of views and features, I could never really be sure. As Jackie pointed out - 'seems to be lots of hills you didn't quite make it to the top of previously!'. She exaggerates, but she was correct about this one and Ben Vorlich. 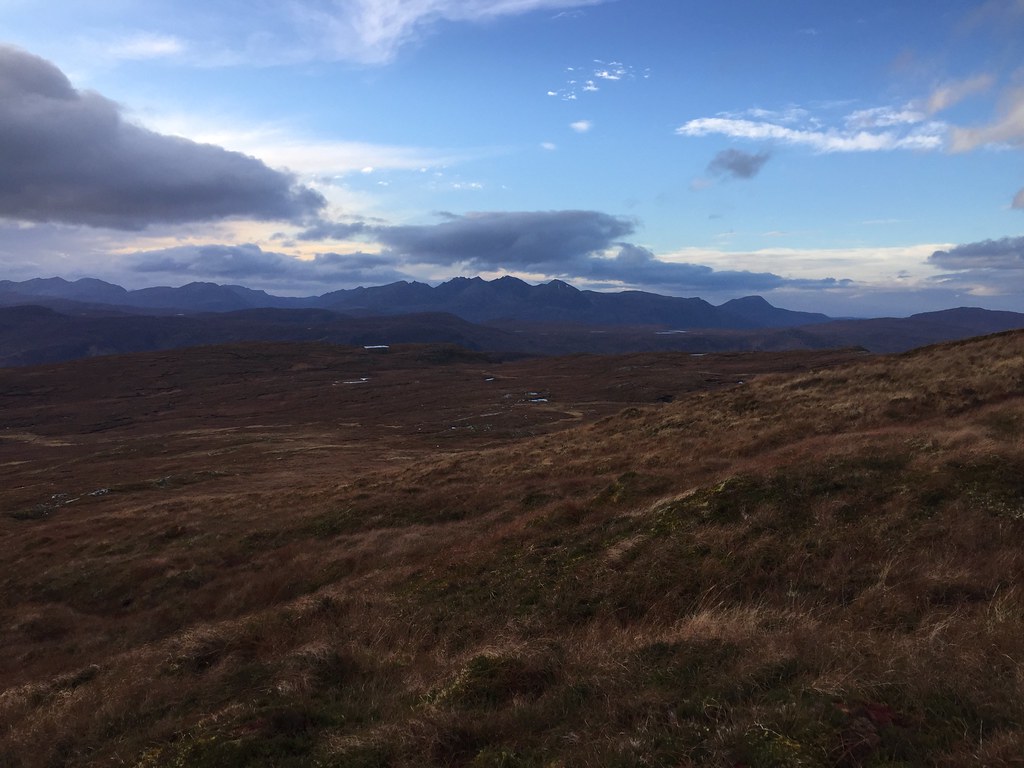 An Teallach from the summit

The eastern summit was a better viewpoint and a nicer spot, being a bit stonier. We spent a few minutes here taking photos - the hill deservedly has a reputation for being a good viewpoint, although I think we were spoiled by our recent wander over Beinn Eilideach nearby, which has better coastal views. 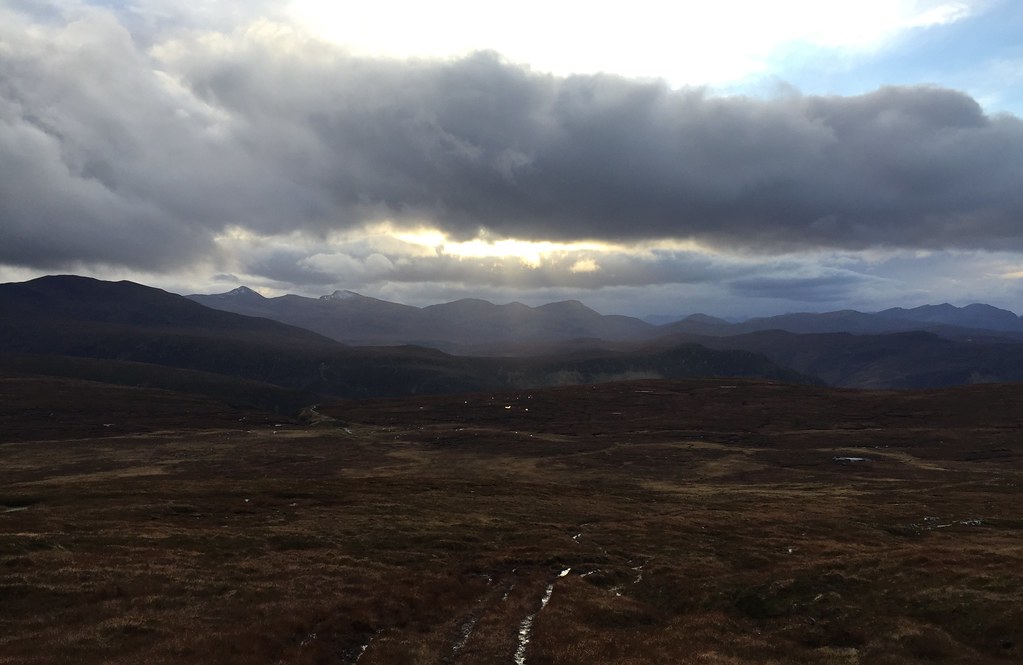 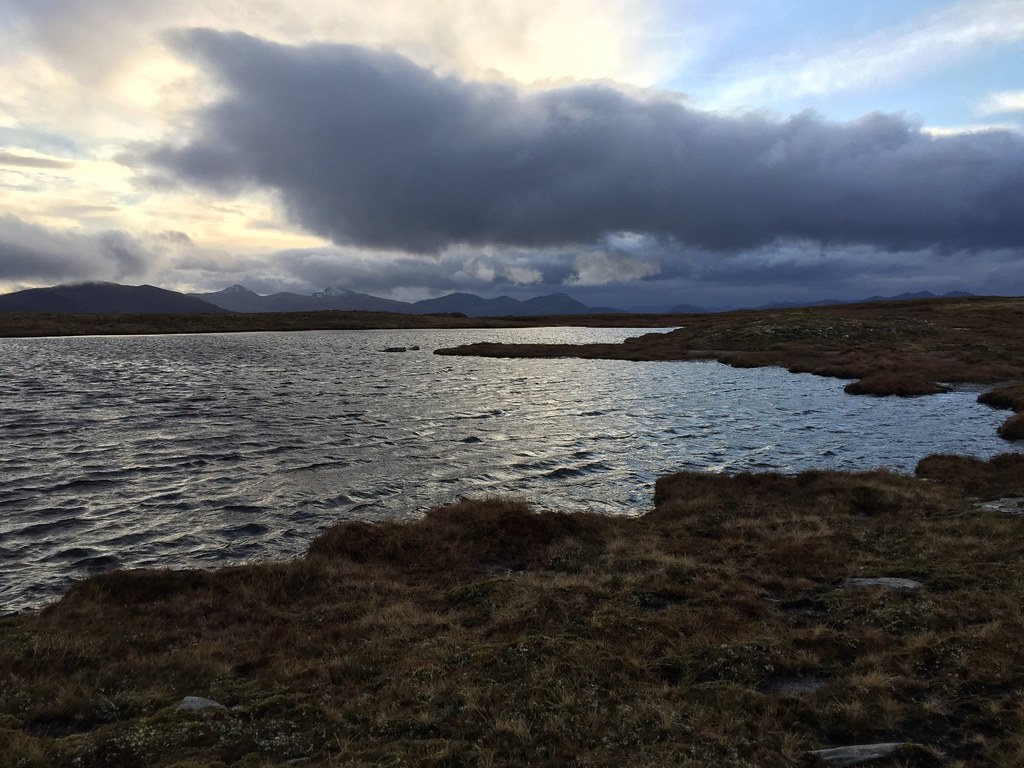 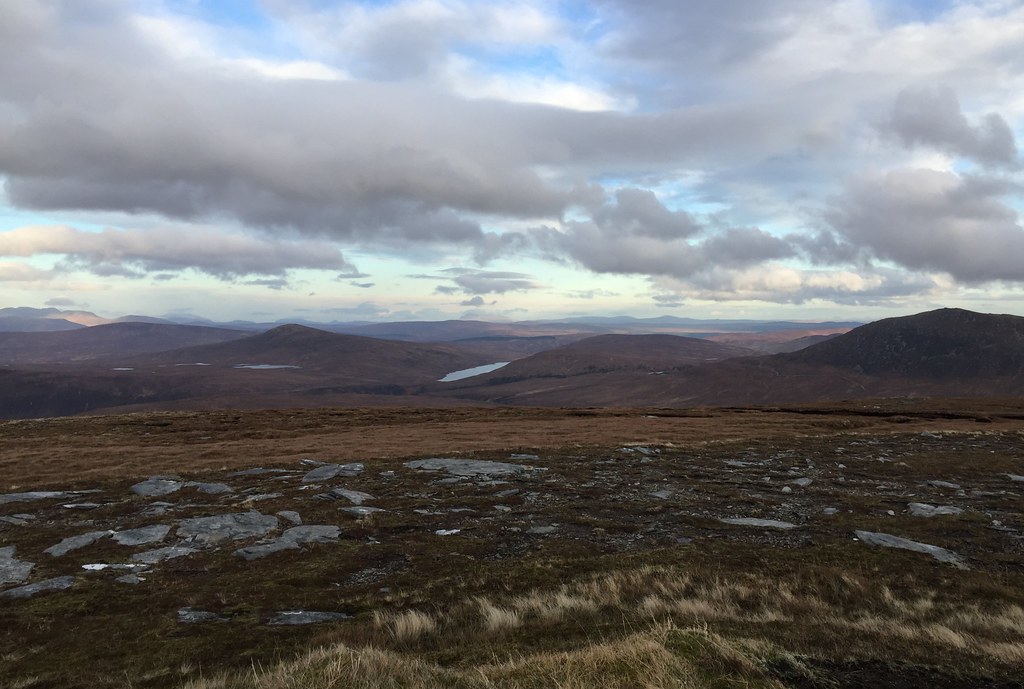 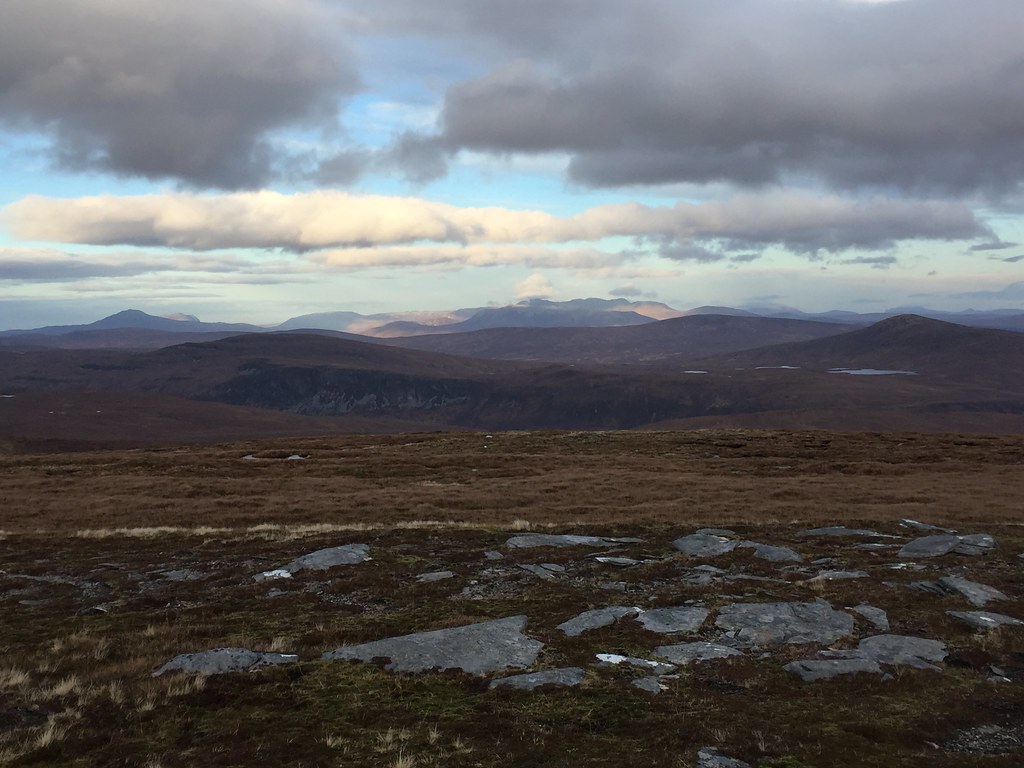 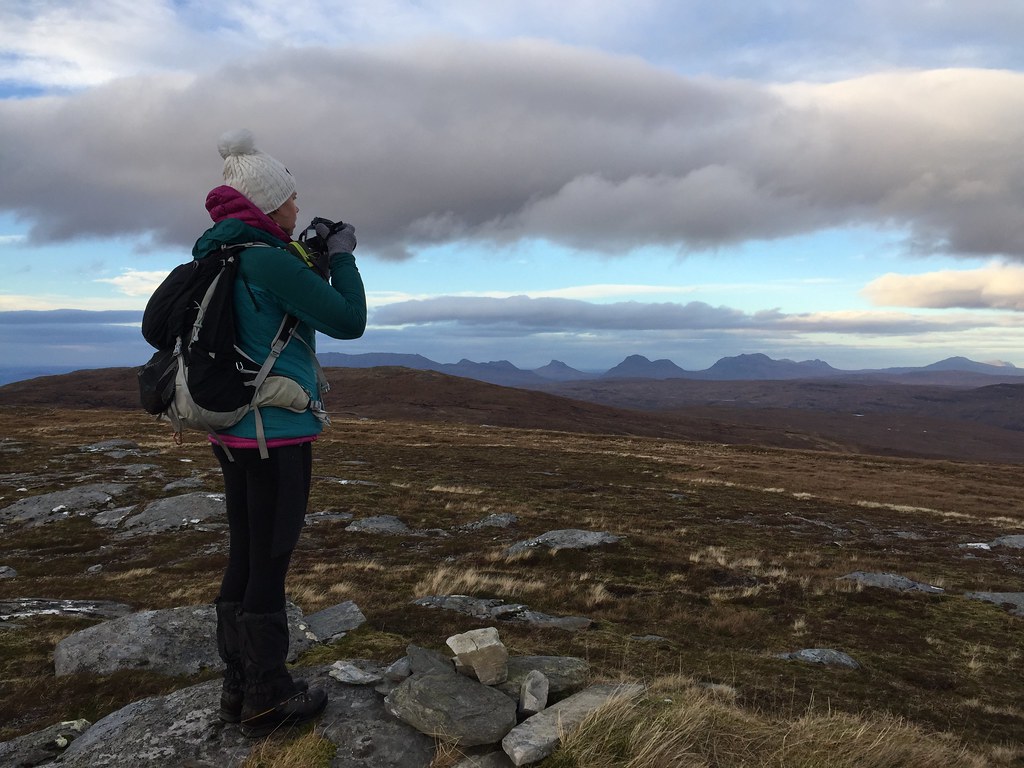 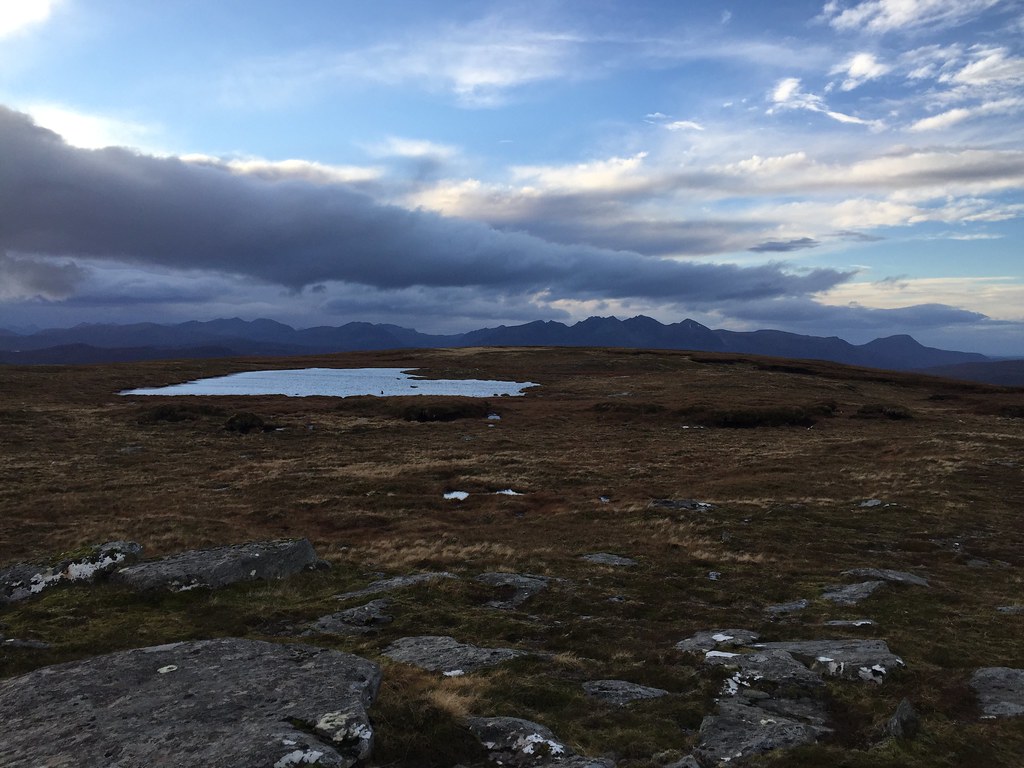 An Teallach across the summit loch 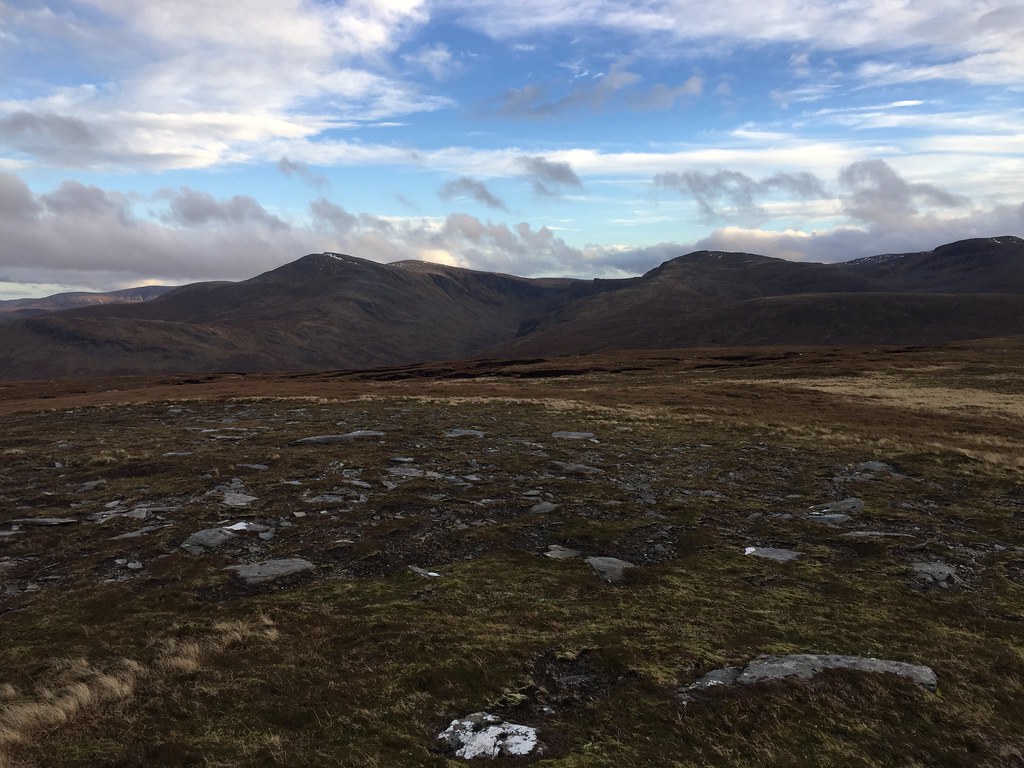 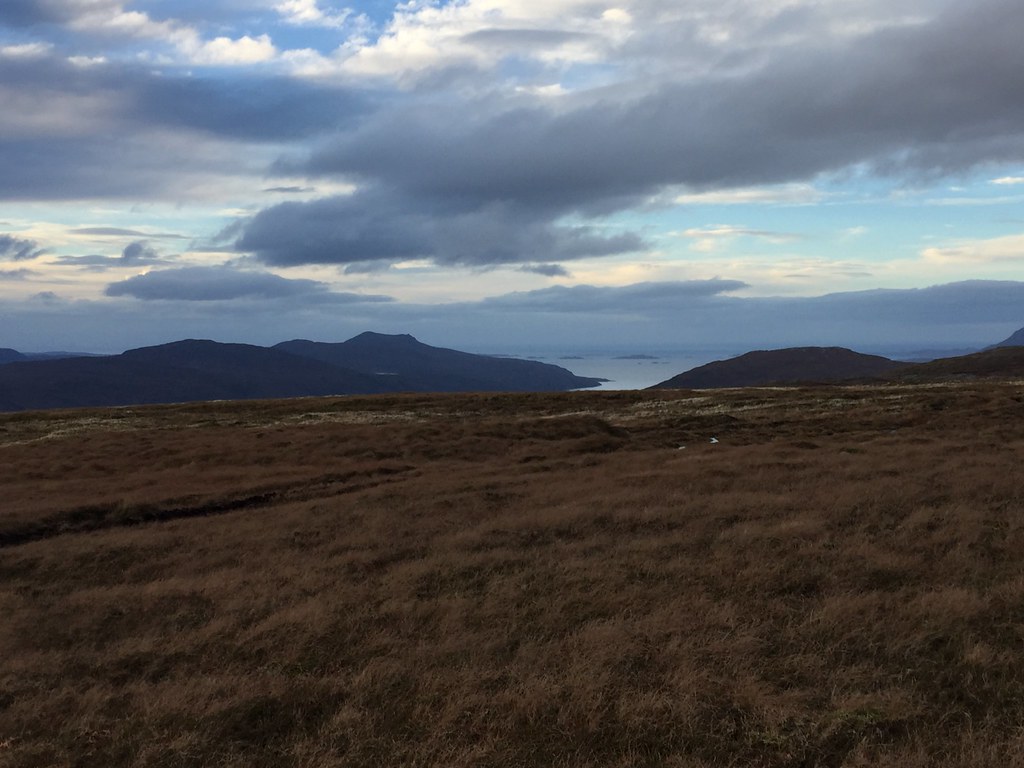 After looping the summit loch, we opted for a similar route back down as Jackie was tiring, A quick stop at the end of the good track again gave us fuel for the final descent to the bikes. 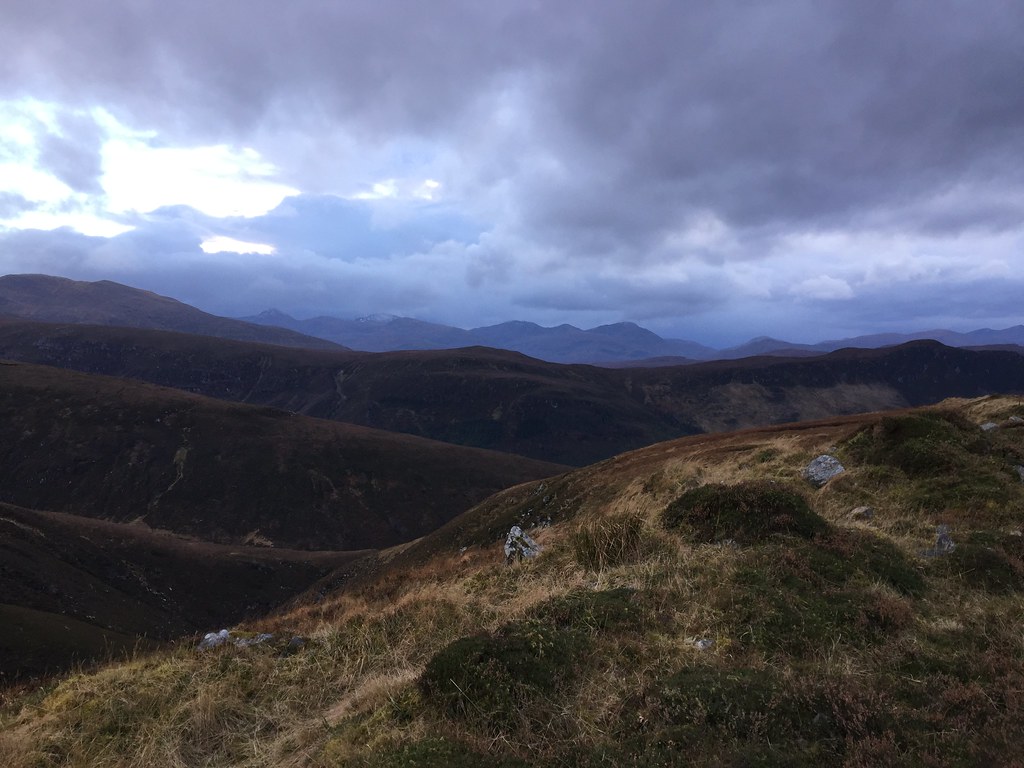 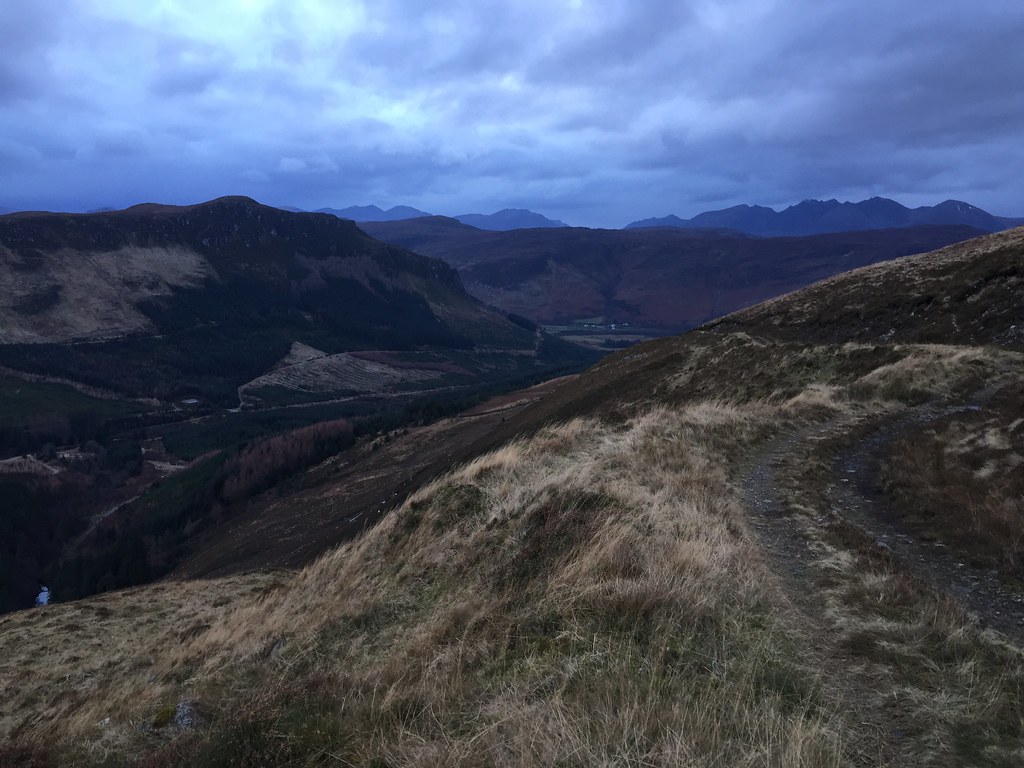 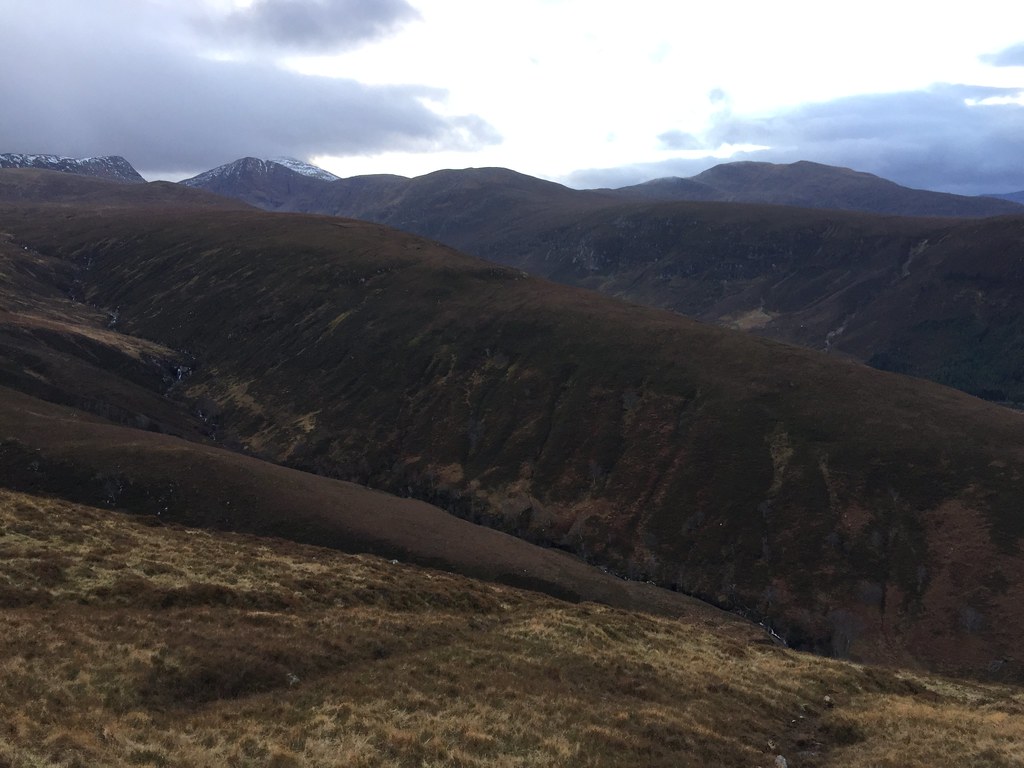 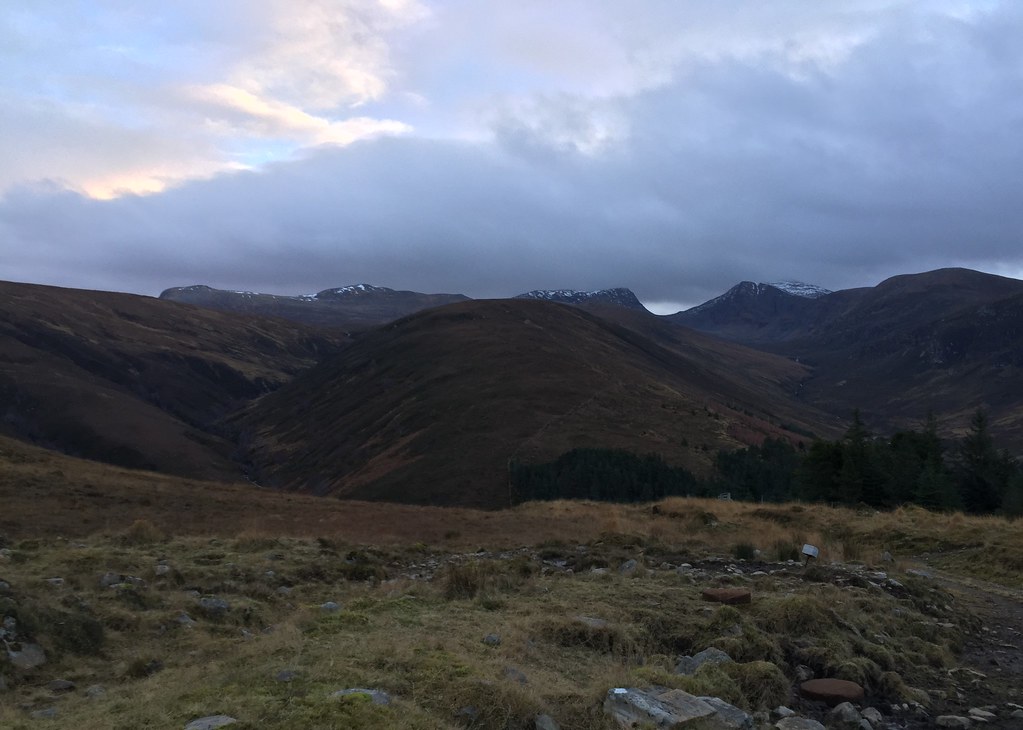 The ride back to the car was almost entirely downhill, and took about a quarter of the time that it had taken to reach the start of the walk. This definitely made bringing them worthwhile, as the walk-out would probably have finished Jackie off. This time she had enough energy left to drive home, just as a heavy shower of rain came on. Good timing

It was on the way home that we discovered that we would likely be back into lockdown after Christmas. None of the other changes made any odds to us (we were already planning to spend the holiday on our own), but it did possibly make our leisurely 2 weeks off with assorted hills and camping look a bit less likely to happen (although I'm still unclear how much the restrictions actually stop us doing things in the highlands), but it turned the following day from a day of leisure into another hill day just in case!

A very underrated Graham, this one. We did it in full winter conditions a few years back. Good viewpoint to An Teallach! We might go back this winter if we get a good day for it

I was wondering about the wild camping/traveling restrictions as well. Kevin has some time off in March and if we are still in tier 4, could we possibly camp overnight somewhere in the Highlands? There is nothing in the gov guidance saying "wild camping within your tier is forbidden" but, quoting gov.scot:
"If you live in a Level 4 local authority area: you must, by law, remain within that area unless you have a reasonable excuse.
If you have to travel for essential purposes, you should follow the guidance on traveling safely. You should also keep journeys within the area to an absolute minimum."
It is a bit vague, isn't it? I bet government officials don't go wildcamping so they forgot to add specific instructions

Hopefully things will improve soon and we will be moved back to a lower tier...

Happy New Year from me and Kevin

I do envy you living so close to all that!

Duncan's moved to Dundee, but I can't even visit him in the current lockdown

All the best for the New Year, and especially hoping that Jackie makes a full recovery.

Nice one guys, looked like a cracking day, Inverlael is a fine starting point and a short drive from Inverness too. The roads have been a lot quieter since boxing day but there is no specific guidance for hillwalkers (probably a good thing if it was going to be anything like the previous advice

) so for me personally I am quite happy to travel within the highland local authority area to visit the hills. I wont be doing any camping but I don't really see any harm in it to be honest. Unfortunately I have a funny feeling the rules may become clearer and stricter fairly soon

All the best to both of you & Cheers.

Thanks for flagging this one up as it hadn't been on my radar and now is. Hope you both keep well and Jackie's stamina grows as we go into spring.