With East Lothian along with the rest of the mainland in Tier 4, I had to restrict my walking to within the county. Eventually decided on a return to Lammer Law. This time I would be taking my new Christmas pressie from W - a pair of Lexi trekking poles. The last few times I have been out, I have ended up with a sore back for various reasons. W thought the poles might help so despite my initial vain feelings of "I am not yet old enough for poles" I decided to give them go. Well, as it turned out W was so right. Weather forecast was an overnight frost with the occasional snow showers. On the day itself it was a bit of a mixed forecast - the odd snow shower, some clear spells and cloud.

our_route.gpx Open full screen  NB: Walkhighlands is not responsible for the accuracy of gpx files in users posts
The last time I walked up Lammer Law in April 2018, I tried to follow the WH suggested route but ended up with a bit of a trudge through the heather to the summit since I missed the path off the track due to the amount of snow. On the way back down though I had followed the path straight down Threep Law. So I decided to try and go straight up Threep Law if I could find the correct path. When I set off the ground was rock hard frozen with some long icy stretches on the track so the poles were mighty useful. View from the quarry

Over the course of the walk, the poles saved my embarrassment dozens of times. There was little sign of the tops due to the low cloud. Looking back down the track towards the car 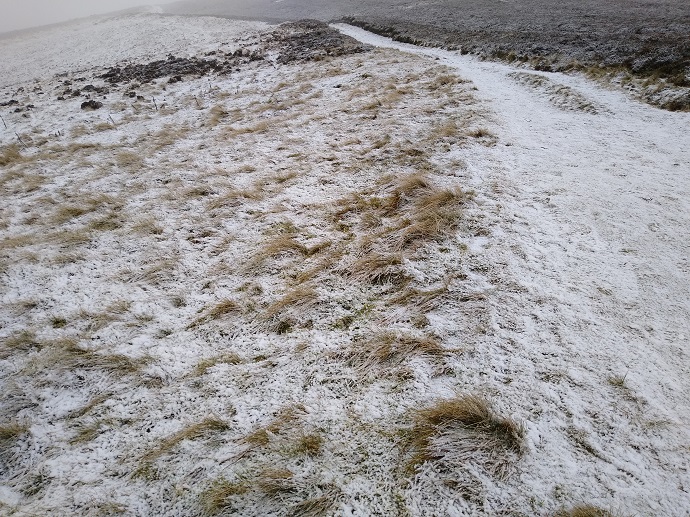 I kept a eye out for the Threep Law path and eventually decided on taking the right hand fork to the ATV'ish track that is just as the fence starts running parallel to the left of the track. Gloves showing the way to the Threep Law path

Most of the way the Threep Law ATV'ish track was never that far away from the standard hill track route so I was not too concerned that it might the wrong one. Eventually though it started to veer away more and climb a little higher. Through the mist I could see the fence with a gate that lies closes to the trig point. The gate on the Threep Law path just before the summit

Once through the gate the summit was no distance at all. The trig point and summit cairn

With no views at all to be had, apart from the cairn looking spooky, I did not hang around long and went back to the gate and headed down the track that runs parallel to this and followed a bit more of the Hopes reservoir route. I was hoping the cloud would lift for a little bit as I got lower along this so I could get a view but no luck so turned round and headed back along the track back home.

By the time I got to the Threep Law turn-off though the cloud had started to lift and the temperature had risen a lot. I got a peek of Hopes reservoir too. May have to come back some time and try actually get to it. I contemplated going back to the top of Lammer Law to see if I could get a view but decided against it - the daylight was getting shorter and the there were a lot more people around. By the time I got back to the car, it looks like the tops were actually clear.

I wonder why Lammer is not in the sub 2000' list. Does any one know? To me it seems a long way from Meikle Says Law.
Is it the Marilyn definition?