With a Friday and Monday booked off work, we had 4 days ahead of us to try and up our Munro tally as much as possible; making up for the months of missed walking during lockdown. The initial plan had been to do the 9 Fannichs over Friday and Saturday but, upon waking early on Friday morning and checking the weather, we saw that Saturday was to be constant rain with no views so we scrapped that plan and started searching for a wee window of decent weather somewhere. We checked Creag Meagaidh as, by combining the group of three with Beinn a’ Chaorainn and Beinn Teallach, this was up there with the most Munros we could get in one walk (out of the ones we had left). So, setting off slightly later than we would’ve had to for the Fannichs, we drove to Fort William for our now customary stop at Morrisons for supplies and McDonalds for breakfast.

Arriving at the Creag Meagaidh Nature Reserve, we parked up in the car park at Aberarder and set off at 10.35am with the sun splitting the sky and the temperature already high for this time of day. The path took us past the Scottish National Heritage-run building and through the high ferns which closed in on either side of the path. At a fork in the path, a signpost stating ‘Coire Ardair 5km’ directed us right, before a cairn at the side of the path marked the start of the route leading through trees to Carn Liath, the first of today’s 5 Munros. Once clear of the trees, this boggy path reaches the open hillside with views back towards Loch Laggan. The path continues up the broad ridge, getting rockier towards the summit. To the west, views of Coire Ardair and it’s famous climbing routes, with the great cleft of The Window visible, separating Creag Meagaidh from Stob Poite Coire Ardair. We reached the summit of Carn Liath at 1.05pm, taking 10 minutes for a breather and a quick bite to eat before carrying on, as we still had a long day ahead of us. Following the ridge westwards, we ascended the minor summit Meall an t-Snaim and over another Munro Top, Sron Coire a Chriochairein, complete with cairn which we sadly realised was not the second Munro and we still had another 2km or so to go. The path sticks close to the edge of the rim of the corrie which drops sharply to Lochan a’ Choire. A line of rusty old fence posts guides the way to the summit of Stob Poite Coire Ardair, which we reached at 2.40pm. The wind had picked up by this point and the cloud starting to roll in. We were off again 15 minutes later after a couple of brief chats with a photographer and another group of walkers. They seemed to be impressed/shocked that we were doing the round of 5 carrying large overnight packs! We descended to The Window bealach where we had a quick stop (can’t remember what for - the pitfalls of writing a walk report almost 5 months later…) before beginning the steep ascent up to the Creag Meagaidh plateau. This then narrows to a ridge, at the top of which is the cairn marking the summit and our third Munro of the day. There was now a real cold wind blowing so we sheltered ourselves behind the cairn as much as we possibly could while we consumed the obligatory Irn Bru. We set off from the summit at 4.10pm, deviating now from the standard route for these three and going cross-country to link the Creag Meagaidh group to Beinn a’ Chaorainn roughly 4km away and then finally Beinn Teallach. A broad grassy ridge led us off Creag Meagaidh before picking up a line of old wooden fence posts which we followed for a while until they veered off to the right, with us continuing on directly west to reach the Bealach a’ Bharnish at 820m. With more rugged and pathless terrain, it wasn’t long before we’d come across a huge heard of deer. Unfortunately Aimie’s left knee had started playing up on the descent to the bealach, taking us longer than anticipated. Another broad ridge led us up to a flattening 200m above, which the knee had no problem with as it was fine while ascending. We left our bags here for the short out-and-back to the summit of Beinn a’ Chaorainn along a nice curving ridge. Ahead of us, views over to Loch Treig and the Easains, the Grey Corries and, beyond them, the Nevis range. At 5.50pm, we reached the summit, where we came across a memorial to Jim Stalker who sadly passed away here in 2018 after falling through a cornice not far from where we stood. We only spent a short time here for a few photos and videos of the views before making the return journey back along the ridge to where we’d left our bags. 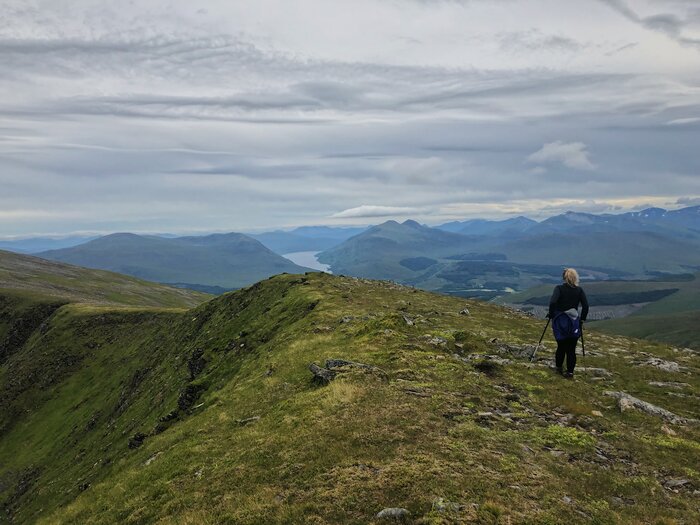 We descended over extremely bouldery ground, curving west the whole time to reach the 614 point on the map which marks the bealach between Beinn a’ Chaorainn and our final Munro, Beinn Teallach. With such a steep descent and a dodgy knee that seemed to be getting worse, Aimie was massively struggling as she limped the last of the downhill while waiting on painkillers to kick in. Due to the amount of time it took Aimie on the downhill we were worried about making camp before dark and had to opt for the speediest ascent possible to the final summit - as the knee wasn’t causing any issues on the ascents, this allowed us to try and make up some time. We followed a faint path up the wet slopes of Beinn Teallach before losing it somewhere in amongst all the ups-and-downs and rocky outcrops. The weather had really turned by now - grey skies and a light rain which seemed to be magnified by the ferocious wind. We had managed to climb the 300m ascent within around 25 minutes and reached the final summit at 8pm. We touched the cairn and immediately began the descent so that we could get out of the wind as soon as possible. There was also a long descent ahead of us to reach flatter ground and the small matter of finding somewhere to camp before it got dark. We were initially on a path off the summit which soon disappeared (or we just lost sight of it). Our target was the path marked on the map running alongside the Allt a’ Chaorainn, figuring that we would find a camp spot somewhere around there. The path, when we got there, was extremely boggy and skirted around the edge of some forestry. We reached the river and found it shallow enough to cross easily, which had been a worry after reading about how it can be impassable in spate. It was just on the other side where we decided to set up camp - close to the path but, being 9.20pm, it was late enough that we knew nobody would be coming down (we hadn’t seen a single person since leaving Creag Meagaidh) and we’d be away early enough in the morning. The tent was set up in a swarm of midges - the head nets were worth their weight in gold here but made dinnertime difficult… We were away the next morning at 9.50am. This was later than we’d planned but we’re champions at pressing the snooze button on camping trips. An initially boggy track soon joined the forestry path through felled trees before taking the right path at a fork, through the still-standing trees to reach the A86 at Roughburn. Any reports we had read from others who had linked up the two groups of hills had mentioned two cars - one parked here, allowing them too drive back to the other car at the Creag Meagaidh car park. We, unfortunately, only have one so this left us with an 8 mile walk back to the car, taking just under 3 hours. The car has never been reached with such relief!

Especially with a knee giving trouble too

LONG walk back too. Congrats on doing it all, I think you deserved your extra snooze!

I really enjoyed this - its a massive walk well done. Sympathies to Aimie for her knee and congratulations on keeping going

Creag Meagaidh has some amazing worries.

Anne C wrote:Oof - a big round!

Especially with a knee giving trouble too

LONG walk back too. Congrats on doing it all, I think you deserved your extra snooze!

Huff_n_Puff wrote:I really enjoyed this - its a massive walk well done. Sympathies to Aimie for her knee and congratulations on keeping going

Creag Meagaidh has some amazing worries.