By this time I was considering getting a bit more adventurous with the Pentlands - looking beyond Allermuir and Capelaw at the closest corner, and out to the Black Hill, which looks so solid in the view from the city, and which I did climb once years ago when I was first exploring the Pentlands.

I'd been through Riccarton a few times heading west, so the start was only a variation on a theme - down to where the canal bends at Sighthill, past two bridges to the third at Hermiston, and up past Riccarton, where instead of heading through the campus I had a nice walk along a road that doesn't exist any more and eventually more or less peters out among the trees, and on up the long straight hill to Currie and on again past the church, with the views opening out. 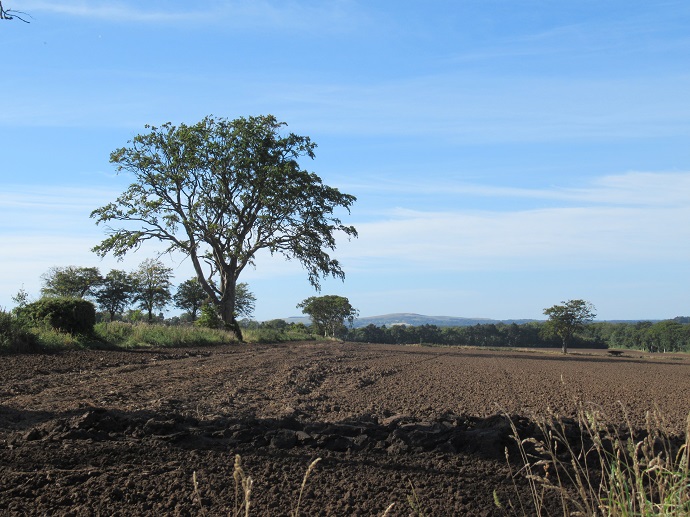 At the top of the Kirkgate I kept going - a lovely straight track with a strip of trees on one side and the hills ahead, This track eventually becomes a path by a wall, and joins another path and another wall coming in from Harlaw, with a nice photogenic tree. Black Hill from here is a great dark bulk - it's brown, really, but you can see how it got its name in contrast to the hills around it. 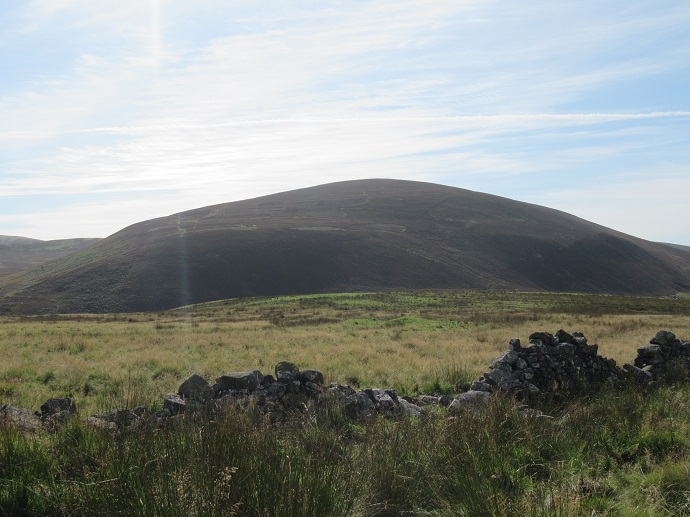 Where the path left the second wall I went straight on, hoping to find a smaller path which the map shows cutting over towards the long winding end of Thriepmuir reservoir, but not really picking anything up except a trace which led towards the little ruin at Craigentarrie, which I could have cut over to earlier on. From here I crossed a dip beyond the end of the reservoir which was not quite as wet as I thought it might be. On the other side I found myself on a surprisingly clear grassy track winding up through the bracken, which had presumably come round from further along the reservoir, as there had been no track a minute ago. Further up again it was wheel tracks through the heather - and then it wasn't, and then I was into a short burnt patch, and then I wasn't - I kept thinking I was going to pick up a main route somewhere, but it took quite a while, and a lot of wading through heather, before I finally came out on a good track again just at the edge of the flat summit area, with no idea of where it had been further down. Although Black Hill is big, and set apart - it's one of the Pentland Marilyns, and taller than Allermuir - the top is so broad that the views seem to be set a long way back, although I did have quite a good view now of the northern end of the range laid out. The last time I was on this summit it was talking to itself, slightly disturbingly - there was some kind of small ariel rigged up, and presumably some kind of receiver. But this time it was quiet, in both senses - I sat for quite a while on the stones which are not quite a summit cairn before someone else came along and I thought he should get his turn. The other side of the hill was a completely different view - flat lands and green fields. Down was much easier - the path which runs straight downhill more or less from the summit still isn't marked on the map, and still is there. I remember bouncing down through the heather before, but this time with the path dry it was fine - a quick descent to the path which runs along the wall on the other side of the hill. The path along the wall

This eventually descends to the little bridge over the arm of the reservoir, with the little building which is obviously a relation of the one at the foot of the Allermuir track. From here I took a wander along the edges of the two reservoirs - Threipmuir first, stretching away towards the farm on the other side, and then Harlaw among its trees, where I got a bit muddled up trying to get away from it onto the track towards Harlaw Farm and ended up going through a hole in the wall rather than any kind of stile or gate. Then back along past the odd bend in the road to the top of the Kirkgate and down to the church, with a stop to admire the sundial, and onto the long road home.