BEN VANE a perfect day out

BEN VANE a perfect day out


finaly, after so many grey and gloomy days, the weather forecast promised something better. and it became true!
we decided there was no time to loose and definitely we wouldn't waste a sunny day doing nothing therefore we woke up EARLY morning, packed, and drove to inveruglas to tackle ben vane.
we arrived to the village just before 10.00.the day was nice and sunny, it was warm! ....well, kind of warm for february

at first, we followed a tarmac road, then after passing the old farm we turned into country road, and again, after passing a stream we reached the beginning of muddy and boggy path up to ben vane. since the very beginning, the views were spectacular - first to a'chrois and ben vorlich, then further up to ben lomond, loch lomond, beinn ime, beinn narnainn and the cobbler, loch arklet and loch katrine hills. amazing!
ben vane is hardly a munro but steep slopes make it a hard day out.
after passing about 1/3 of way up, the bog ends and terrain becomes rocky and rough. nice

then after another 1/3 way up everything is just rocks (for us it was rocks and snow & ice)
actually there was only one tricky moment on the ascent - the rock step just after we passed snow line. the step was high (for my short legs anyway) and narrow... and covered in ice

actually since then we spent the day together, going up to the summit and then down to inveruglas.
in general- the day was great, we had some adrenaline, nice views, nice company and an ice axe experience.
ben vane was very busy, we met a lot of nice lads and gals (lol).
ok, now you go and see the photies let's rock, the path up towards ben narnainn and the cobbler beinn ime from the summit 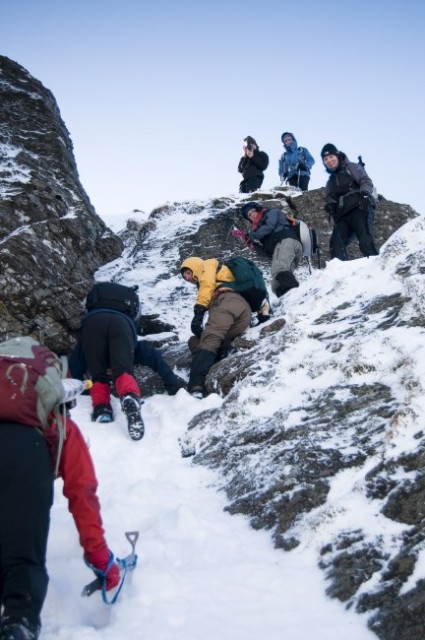 NIce one Blueyed, like the light you got in those photies.

Second one makes the summit look quite clear of snow, but later ones show how you can be fooled, looks like there is still a fair bit up there. Good job you met those climbers with the axes - that step looks tricky!

Great pics and report. This is on my list.

@skuk007- yeah, it's so easy to be foolled that there is hardly any snow, that's how it looks like from the glen but there you climb and things change

the weirdest moment was when we reached some kind of wee ridge with a reasonably high snow drift boulders. although the day was nice and sunny, the wind picked up the snow from that boulders and blew it in our direction. felt like a wee snow blizzard, 5 mins blizard on a sunny day.
after the experience with ice axes i already bought one yesterday, just in case

Definately the finest of the Arrochar Alps, makes you work to bag the summit

Looks as if you really enjoyed the day

Great pictures of a great little hill. It may be a wee munro but I always find it makes you work for the summit just as much as some of the more illustrious peaks. One of my favourites for any season

Enjoyed this thanks, super photos and it looks like a good challenging hill. Bit of a queue on the steeper part though, I was imagining the domino effect!

Is that you now going to buy an axe?

hi, yoke, i already bought one, learnt my lesson

the jam at steeper part was made by us actually, 3 guys going up (they made it quite quick but waited for us to get down, in case anything happened) and 5 going down. basicaly we helped each other and made sure we did a good use of axes

)
planning to head to ben vorlich or schiehallion this weekend for another wintery stroll.

That tricky step sure looks tricksy

This is a great report with some great photos and great weather. excellant ! Well done

Great report there, im planning on doing this tommorow and it'll be the first Munro I do without having anyone of experience with me (I'll have that glory

) so im trying to gain as much knowledge about the walk as i can. On your tricky step picture, it looks like the rock band to the left of the red circle would have been much easier to ascend but the picture could be fooling me and those rock bands might be much higher than they look. Again, great report