Very summarised pre-amble before photos and story time: Yet another epic mountain, selected due to the wow factor and perhaps a feature in Trail magazine. I had never been to Skye and therefore, this was an eye-opening adventure from start to finish!

The drive began early, but then the last Monday of November would brighten up slowly, of course. Amidst the excitement of new mountain ground to be explored and weary eyes, I remember being a passenger glued to the dim views outside the car window. As Matt T drove by Dundreggan, the mercury had stalled at a frigid minus 5C and the trees lining the road were etched with frost. The long expanse of Loch Cluanie, now familiar, was blocked in the twilight by a perfect cloud inversion. Even if we had time to stop, pictures would not have done it justice. Neither would it a difficult-to-place-without-phone-signal, imposing Sgurr Fhuaran as we dropped through Glen Shiel and onwards towards the Skye Bridge.

The turn off at Broadford took us onto the single track road towards our mountain of choice. Sheep and cars were equal in number at 'a few' each and I did not envy the more experienced driver - Matt. Thoughts of the car journey disappeared as we meandered down towards Torrin and that view across Loch Slapin hit us. 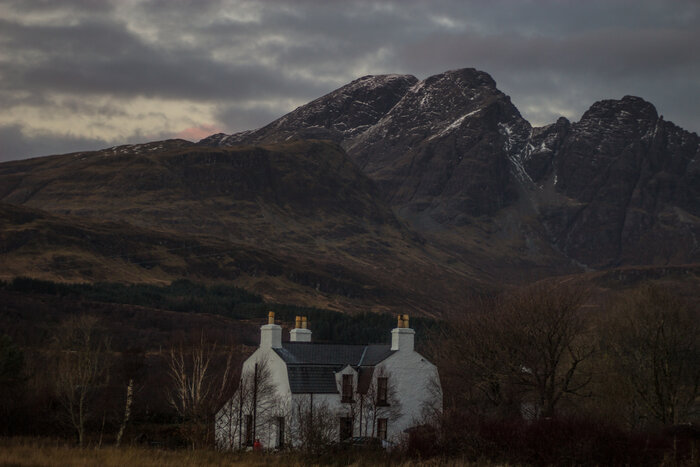 However long the journey had taken, we had timed it just right to begin with the sunrise colours at our backs. The time of year meant not a lot of hours but the light falls differently on Skye - low and mesmeric.
As practiced 3 weeks earlier at Maol Chean-dearg, Matt became the subject for adventure modelling. Still to get a phone call from Rab to be a brand ambassador, but any day now... 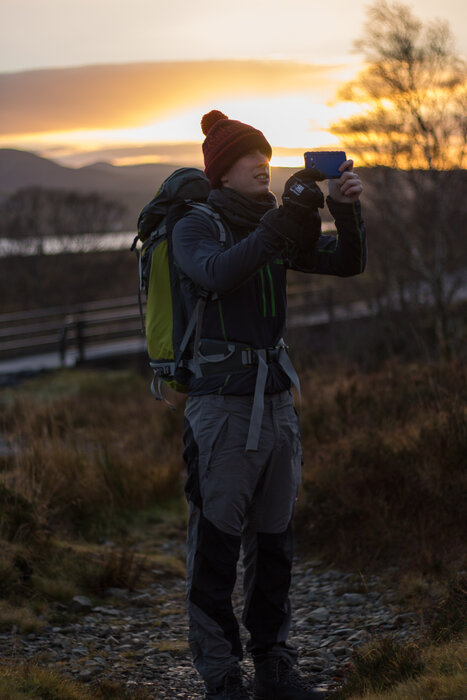 So we began. There wasn't much of a wind chill down at sea level but it was certainly brisk, and so that dictated our pace. The track was readily followed and we gained ground quickly, and in a flash we were heading up through the Coire Uaigneich. The clear waters of the Allt na Dunaiche were too good not to admire, but with the crags lighting up in the sun the stream was promptly left behind. 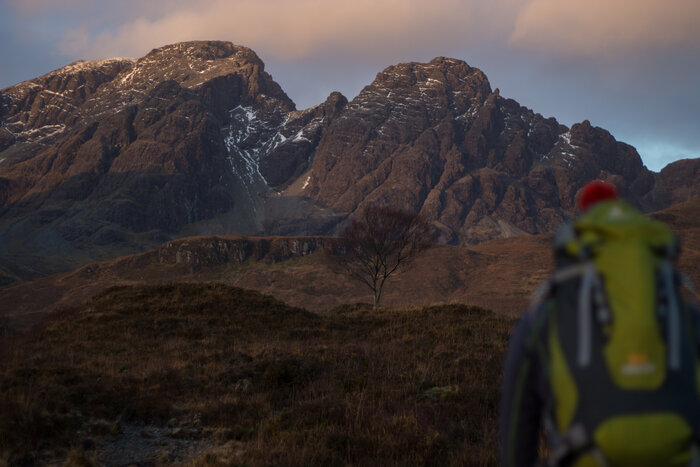 The first light drawing us forth 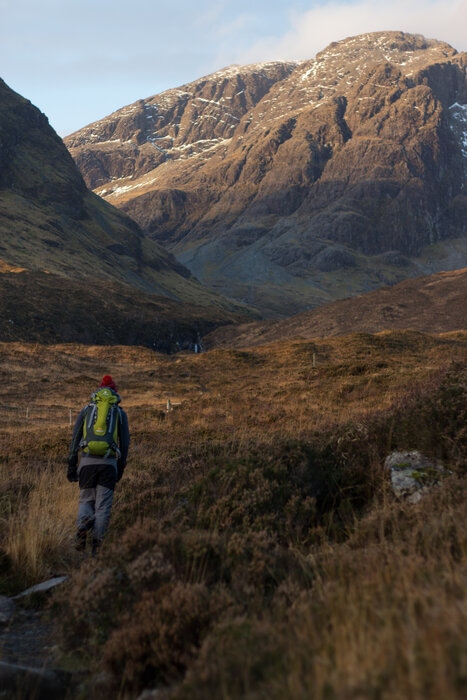 In for a great day 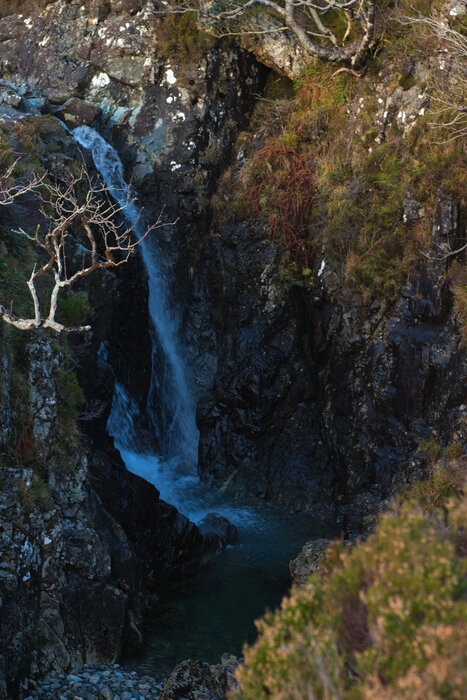 Waterfall of the Allt na Dunaiche

Heading up through the coire, the walls began to rise on both sides, and the world behind and above us was awakened in the glow of sunshine. Frequent were the look-backs, in contrast with little forward planning. Whether by consensus or on a whim, we found ourselves ascending a little bit too early.

Whilst the path continues, we somehow began a direct assault from the south and upwards into the crags of the Coire Uaigneach. Initially successful, we reached a point where the scrambling had given way to full-on rock climbing - and here we were with no gear and no idea!! Being the shorter man, I struggled to make it across a narrow gully, tight against the crags with no room for error. It should have been a simple 'step-across' but missing the landing would have sent me tumbling off the hillside. Fortunately, I would just save the drama for later. We rounded the crag and tapered down towards the coire floor again, taking the path and heading deeper in towards the real ascent point. 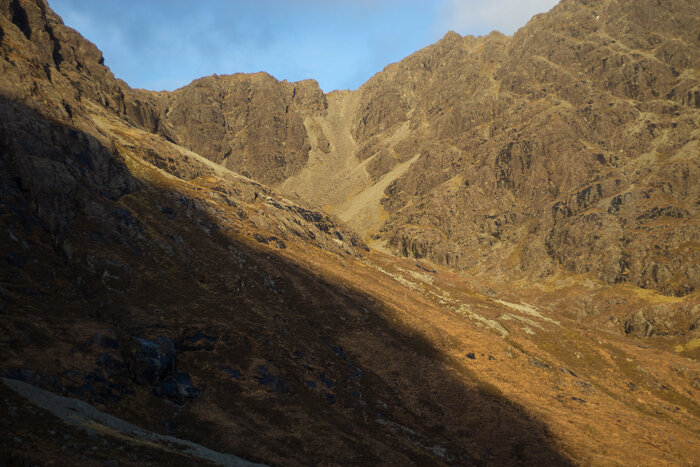 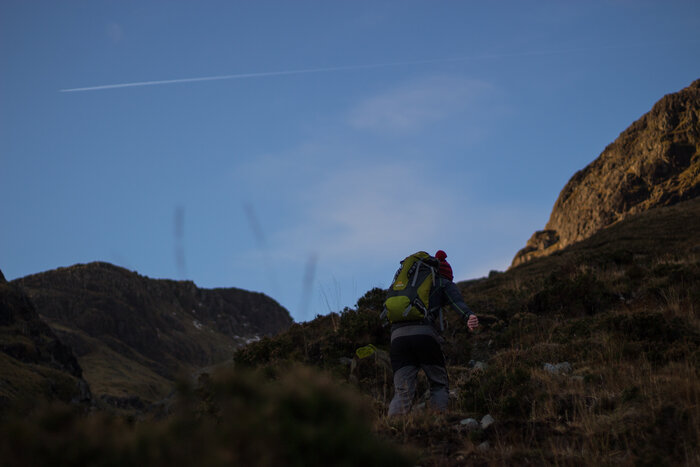 Upwards into the shadow of the coire 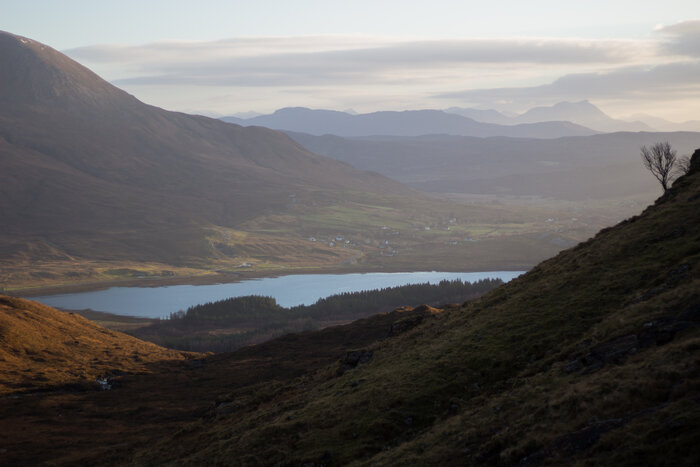 Looking back out to Torrin

After our danger detour, the steeper, rockier parts of the path went quite smoothly. By the time we reached 800m altitude, the temperature was beginning to falter, so breaks were short-lived and photography was rushed. The jagged demeanour of the rock was particularly awesome to behold, dusted with the faintest amount of frosty snow to highlight the many ridges and cuts. 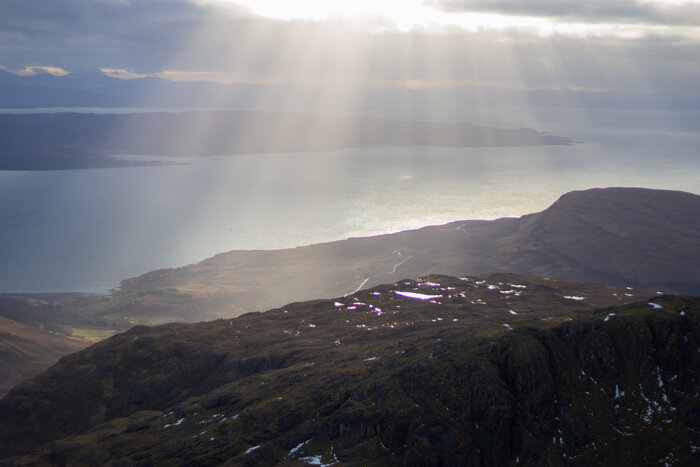 A newbie to the mountain scene still, I was becoming enamoured with the place names, the history and, when given a fleeting glimpse, the wildlife. A raven soared and croaked overhead, the deep tone and the size indicating this royalty amongst corvids had blessed us with its presence. Sure enough, it stuck around - and we tempted the creature closer with morsels from our lunch. Clearly persuaded, the raven kept a beady eye on us as we tackled the top 100m of the mountain. 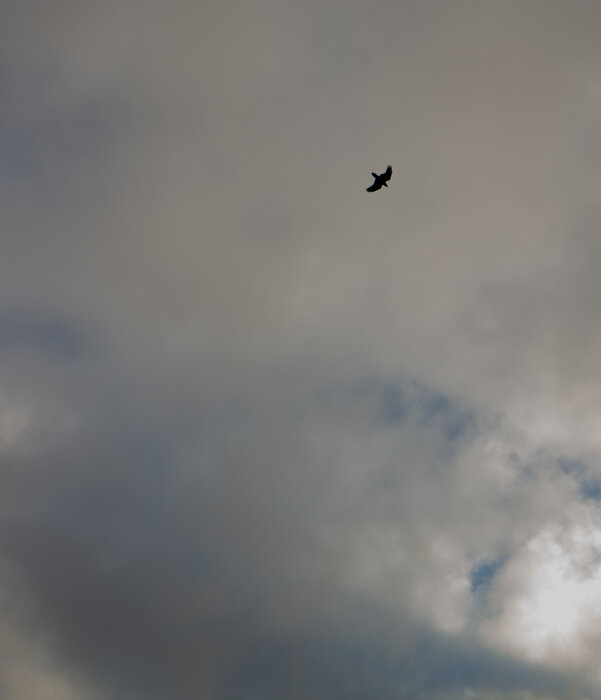 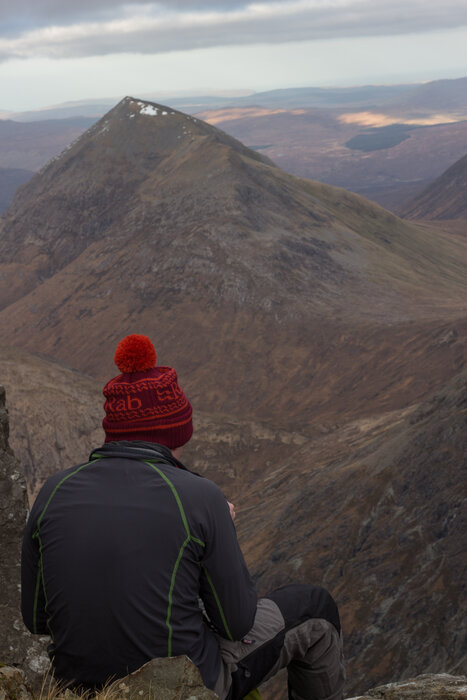 Sheltering from the wind with lunch views of Garbh-bheinn 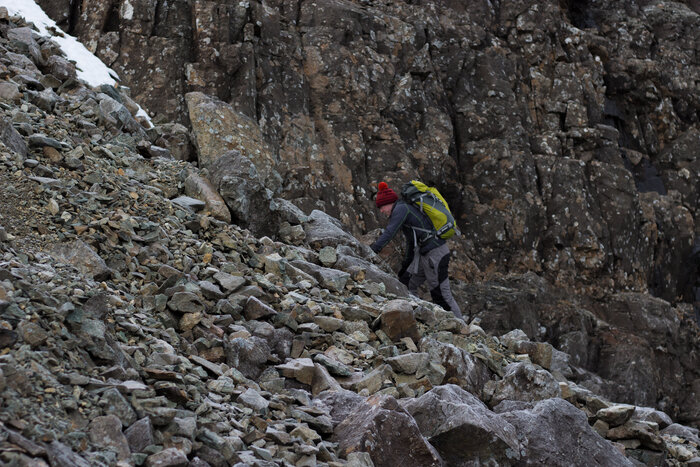 Up through the scree 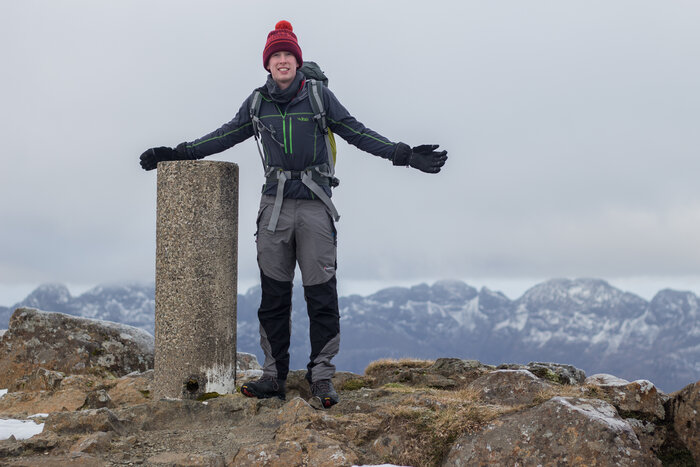 Matt at the summit 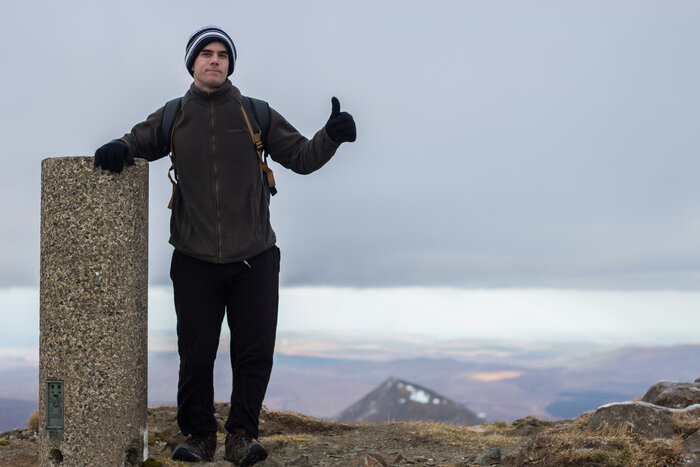 Me looking delighted. Greetings to the ever-present black joggers - fairly racking up the summits now!

The view of the Black Cuillin - otherworldly! 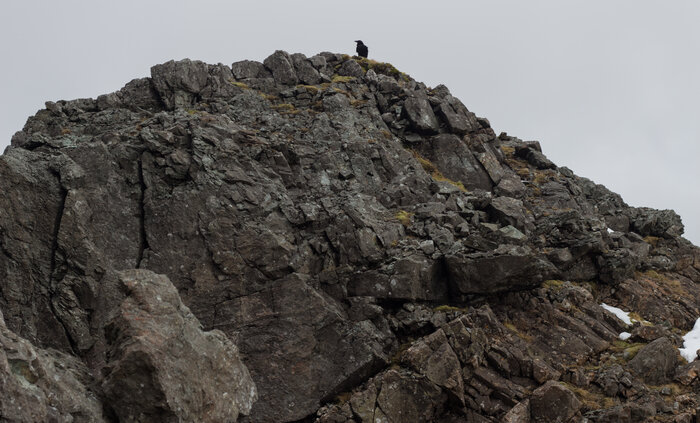 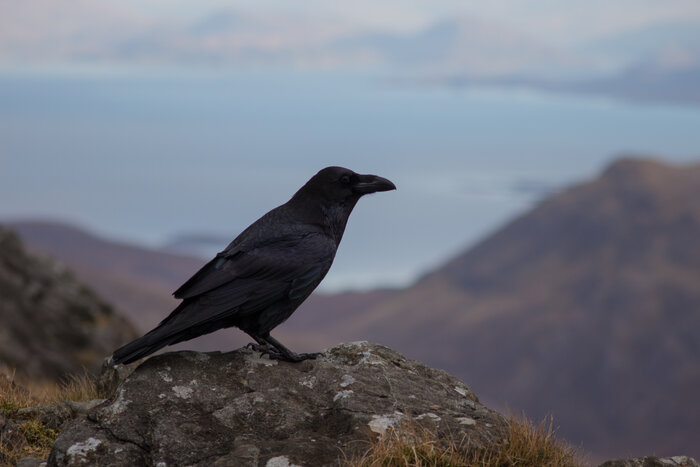 Portrait shoots paid for in food

So, another successful Munro bagged. We beat a hasty retreat on account of the wind chill and the raven had demanded our lunch money

But this had been too easy, too straightforward a Munro, especially with Skye's dramatic reputation. The curtain lifted and I proceeded to enhance my own reputation for inexperience and stupidity. We descended on a small snow patch, Matt taking a diagonal line and kicking steps in for traction. I deviated from whatever prints there were and adopted an 'extreme' stance, relying on years of rollerblading balance. Evidently, that was not acceptable and within a split second, I hurtled past Matt at speed. Sliding out on my right and turning onto my left side, I picked up plenty of momentum and the panic was instant. I must have slid 15-20m before a jut of rock, sticking from the compacted snow slope, slammed the brakes on using my hip.

Cue sinking feeling, being winded, adrenaline keeping the pain at bay...
Now, I'm used to hard falls, but this could have easily been a call to Mountain Rescue, A&E or perhaps a bit further and I would have been a goner!!

This time, I was able to curse this mistake (loudly) and hobble back to health. Nothing broken except some skin and whatever false pride I had!!! Another hard lesson learned 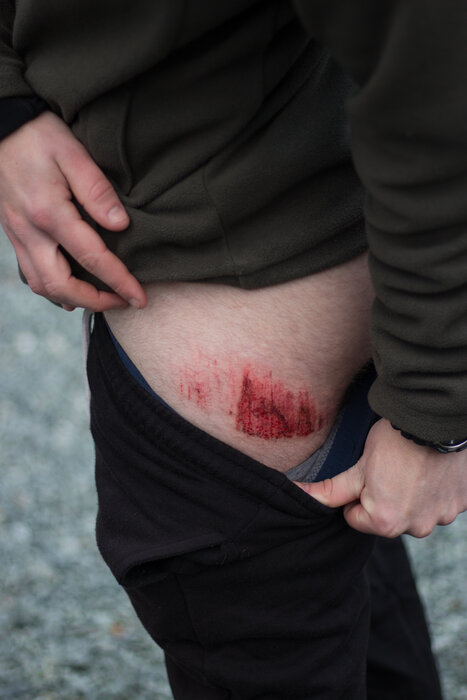 Remember 'Bummit at the Summit'? Here's a painful take

The rest of the descent was spent marvelling at my ability to walk and, more importantly, the engrossing atmosphere of being in one of the finest situations on Skye, or anywhere for that matter. Blaven kicked me to touch, but was worth revisiting again and again!

The drive home passed the illustrious Eilean Donan castle and the mountains surrounding the road through Glen Shiel only stoked the flames for more hill adventures! Another Munro bagged, but I was the one who bit the dust!

Nice report but you were so lucky that nothing serious has happened. These slips and falls can happen so suddenly.
Bla Bheinn certainly is a special mountain and I think the raven is something of a symbol of this mountain. I think I have met the raven on my walk in october 2016. 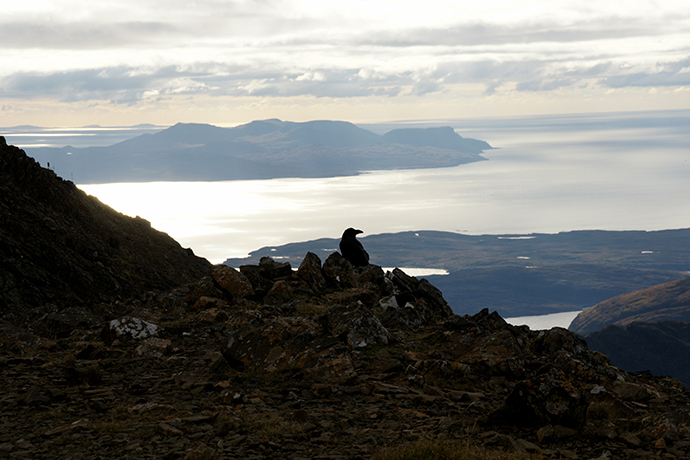 The Raven of Bla Bheinn

Grisu wrote:Nice report but you were so lucky that nothing serious has happened. These slips and falls can happen so suddenly.
Bla Bheinn certainly is a special mountain and I think the raven is something of a symbol of this mountain. I think I have met the raven on my walk in october 2016.

Yes, very thankful to be able to hobble down with a good kick up the backside - much more careful nowadays!!

Agreed, it is a fantastic mountain and not hard to love it - the terrain and outlook is incredible! I've had some great raven encounters throughout Scotland but that was my first and they carry themselves in such an iconic way

All the best, Scott

A great report Scott, i always thing the return is more dangerous than the ascent.

i've encountered Ravens on several Munros but those on Anonach Eagach (see photo) and The Big Bookle seemed the most forthright, i now take a pack of fruit and nuts as tribute. They are clearly intelligent birds and look you straight in the eye. 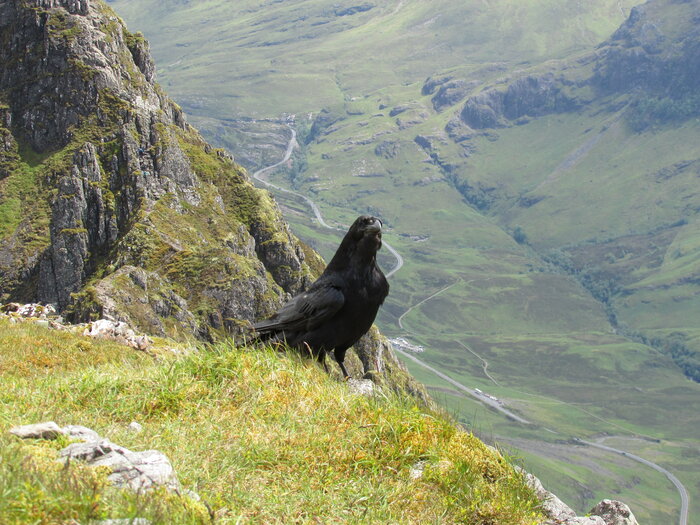 I keep missing out on Blaven because of bad weather but your report has convinced me i should keep trying.
John

Verylatestarter wrote:A great report Scott, i always thing the return is more dangerous than the ascent.

i've encountered Ravens on several Munros but those on Anonach Eagach (see photo) and The Big Bookle seemed the most forthright, i now take a pack of fruit and nuts as tribute. They are clearly intelligent birds and look you straight in the eye.
King of the Aonach Eagach.jpg

I keep missing out on Blaven because of bad weather but your report has convinced me i should keep trying.
John

John, they are beautiful and I always try and offer them something "healthy" when they come to play (the chocolate and wine gums are for me

Blaven was so good that first time, it got a re-ascent about 6 months later - in scorching 25C sunshine! Whatever the weather, it is stunning; keep trying and you shall be justly rewarded! Thanks for your comments