Before any thoughts of lockdowns etc a good snowy walk was just what the doctor ordered. Left the car at 9:00, parked at Loch Eigheach and followed the track to where there is a fork. We took the right fork, which would be our way back out later. Being no obvious route onto the ridge of Carn Dearg, we simply headed up the hillside, aiming for Sron Leachd a' Chaorainn. The going wasn't as bad as we'd feared, the snow being more compact and easier to walk on than it looked. Once on the ridge, the wind picked up dramatically, and the temperature dropped. It was like a different place!! This is such a long, exposed ridge, one I can imagine is quite pleasant in the summer 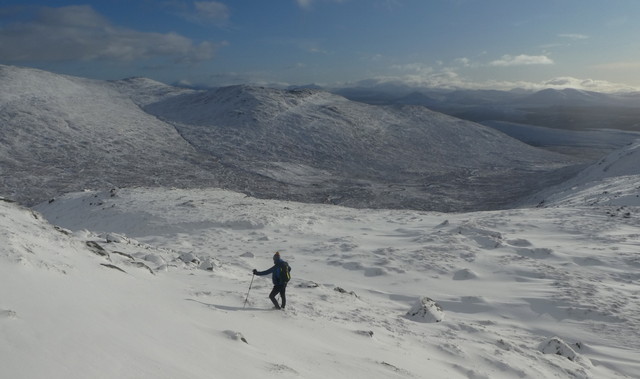 Anyway, we drove on, eventually reaching the summit of Carn Dearg 4 hours after setting off. We tried to find some shelter to have a bite to eat, but it just wasn't possible. So, after quickly stuffing some food in, we headed off for Sgor Gaibhre. Going downhill towards Mam Ban was much better going, and after the bealach, a kind of route was visible heading up SG. 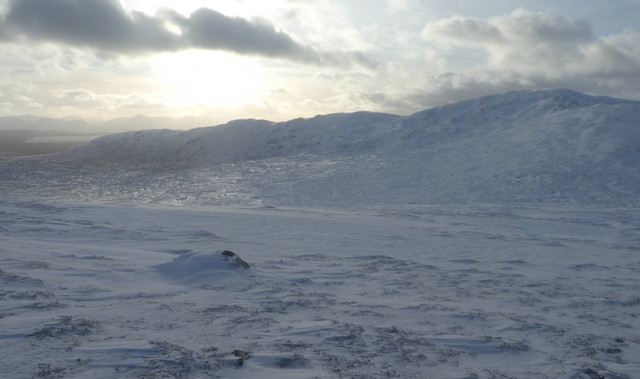 This ascent was straightforward enough, but again the cold & windy conditions prevented us from spending too long on the summit. We had originally planned to head down and over Beinn Pharlagain. However, it was 2:30 when we left SG, so due to the distance over unmarked ground & fairly deep snow, we decided to descend into Coire Eigheach and find and follow the track which runs alongside Allt Eigheach. Eventually, the track was located, after plenty of bog hopping and ending up thigh deep in snowy heather

Still, it's all part of the fun

All that was left now was to follow the track all the way back to the car. Losing light as we near the car.

As we tend to, we were making plans for all the other trips we would be getting through this coming year. Little did we know................