After a decent day in Torridon on Wednesday, Jackie reckoned she still had enough energy for a short walk today. After looking at the forecast, we headed in the opposite direction - down to Dalwhinnie. Creag Ruadh would make a good circuit with Meall Cuaich but we wanted something shorter than that. The skies were grey and the wind was up a little on yesterday, but the outlook wasn't at all unpleasant.

We parked up in the standard Meall Cuaich layby on the A9 and hit the track up to the aqueduct. Underfoot was icy in places, but not enough to make the going difficult. After a mile or so we climbed the fence and dropped down the bank, crossing the Allt Cuaich. On the far side we picked up a quad bike track which headed for the summit of Creag Ruadh. 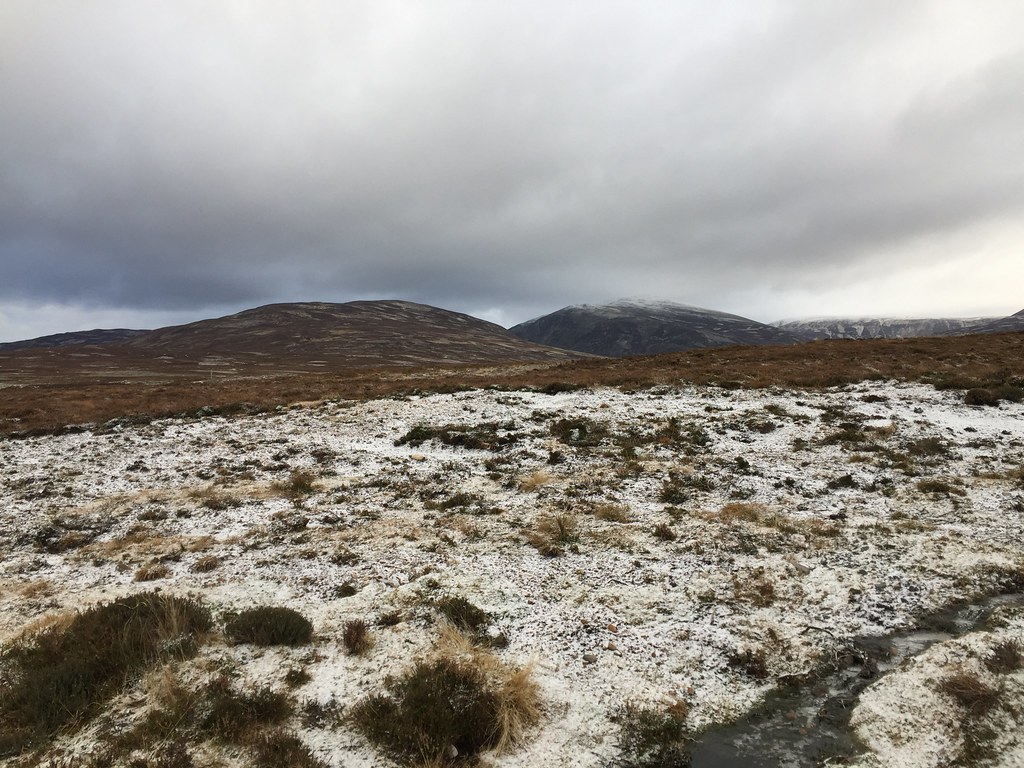 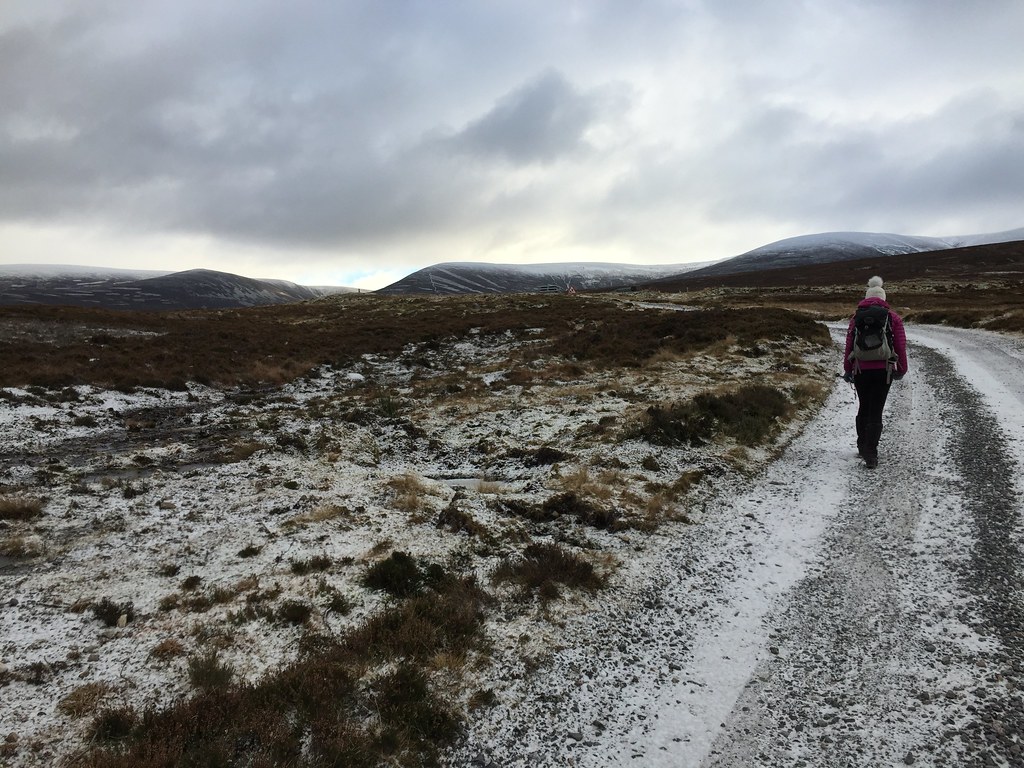 Heading in on the Hydro track

Before crossing a flatter area, we had a quick lunch stop as it was looking as if it may be quite blowy higher up. The track petered out closer to the summit, but there were plenty of burnt heather patches which could easily be linked together. Views back to Ben Alder were good and had me looking forward to a time when Jackie would be fit enough for an overnight trip into that area. 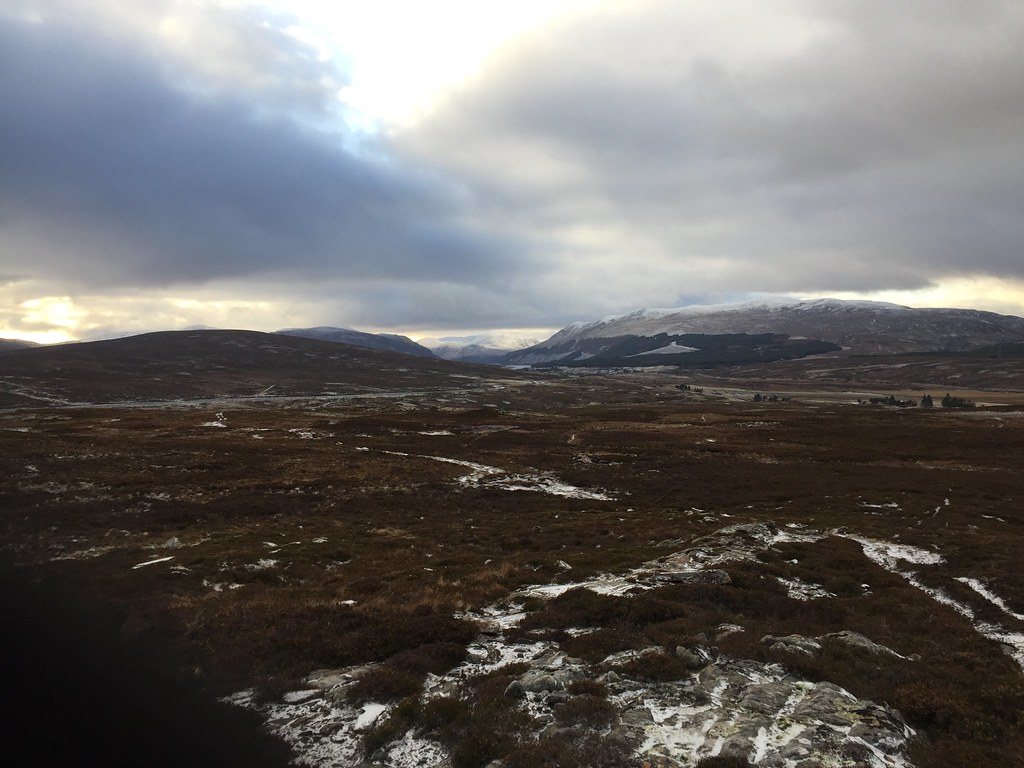 Ben Alder and the Fara 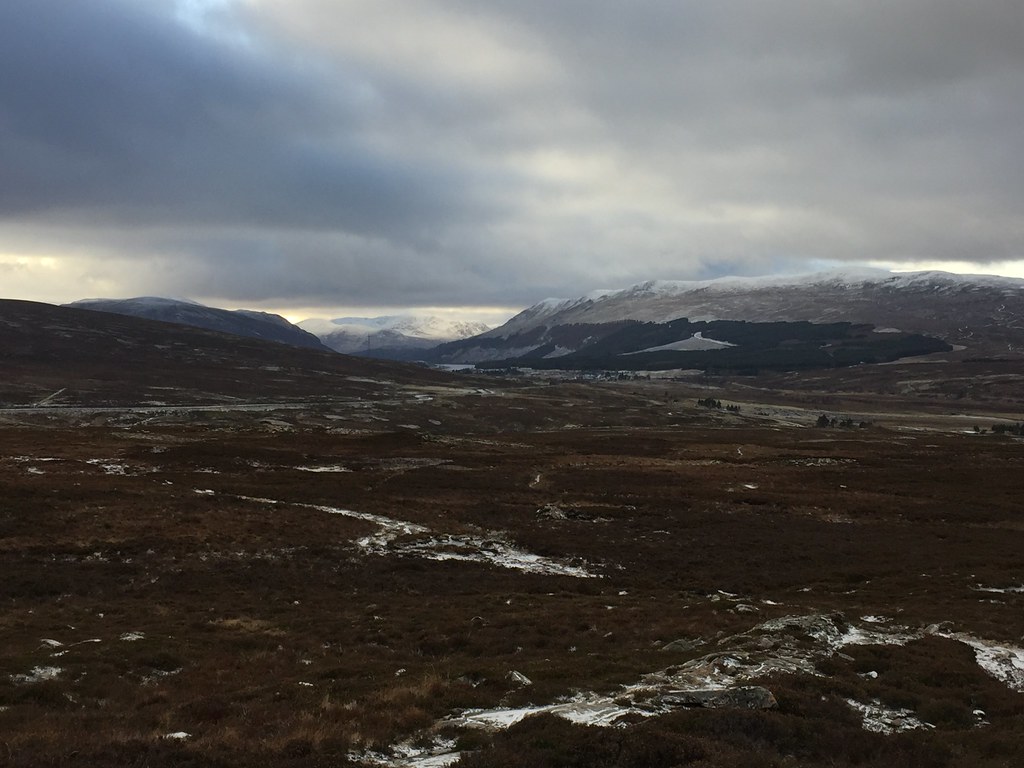 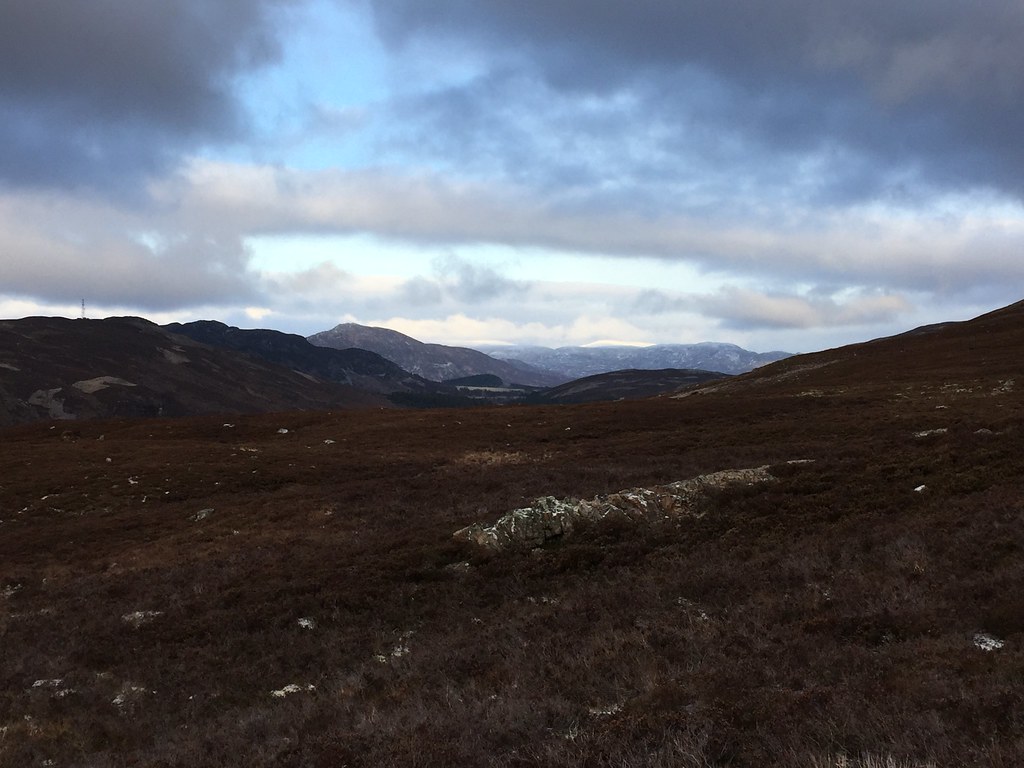 Creag Dubh and the Monadhliath 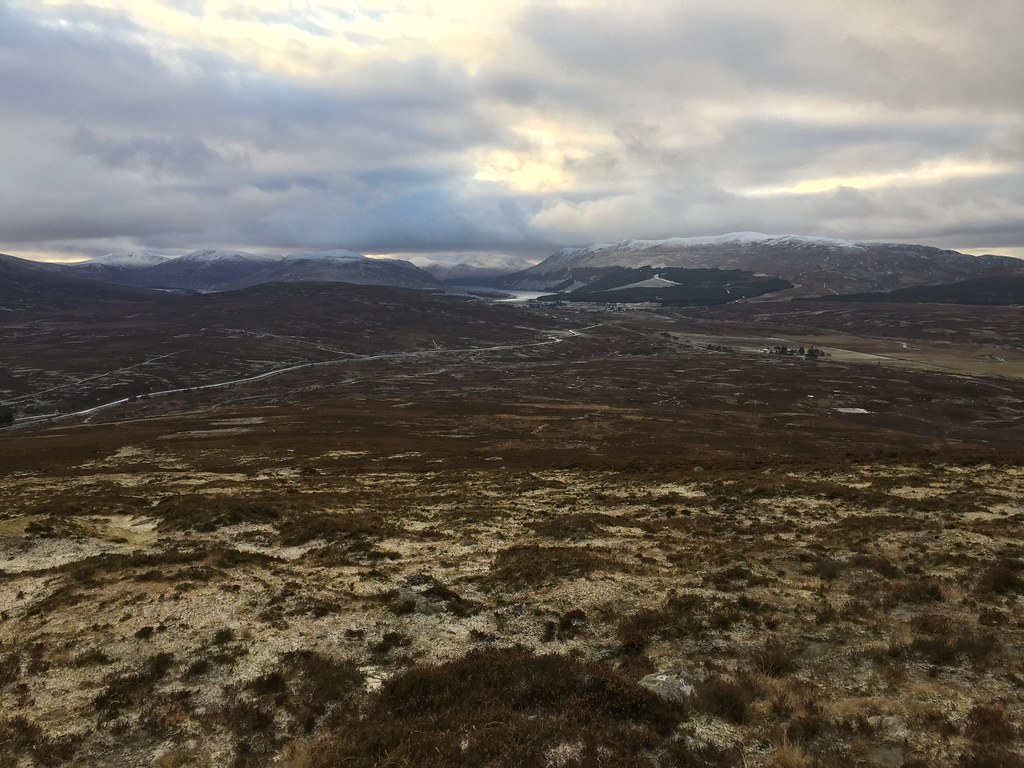 Loch Ericht from the summit

Summit views were better than I remembered despite the greyness - Carn Dearg looks really good from here, and we could see west to Creag Meagaidh. 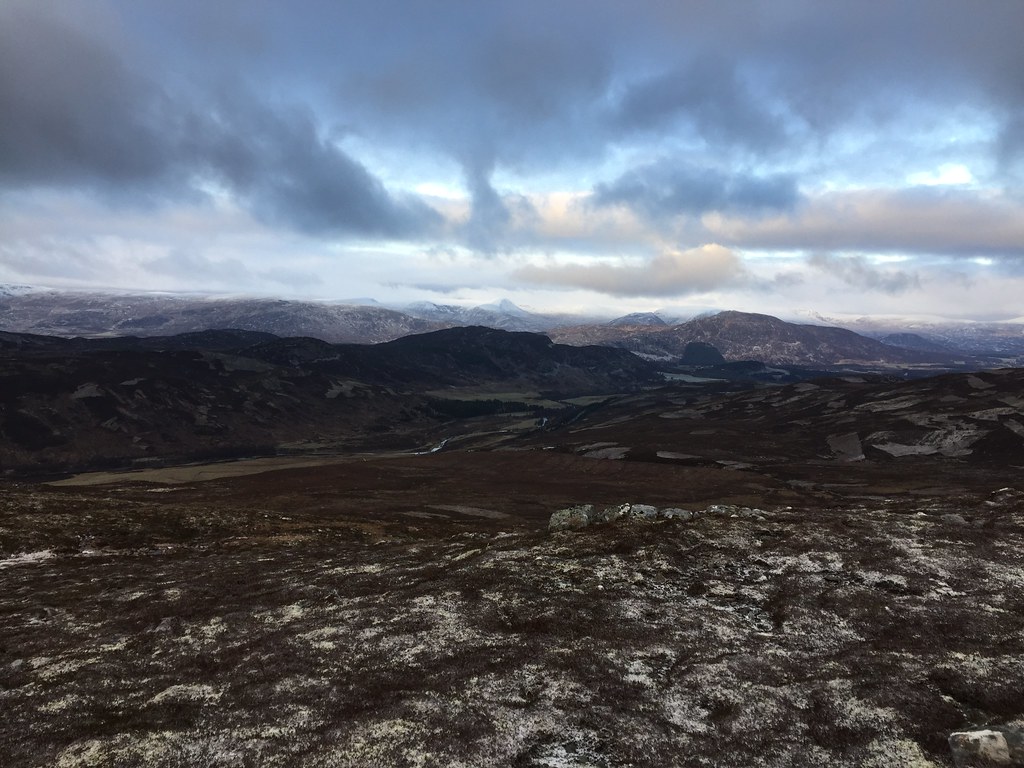 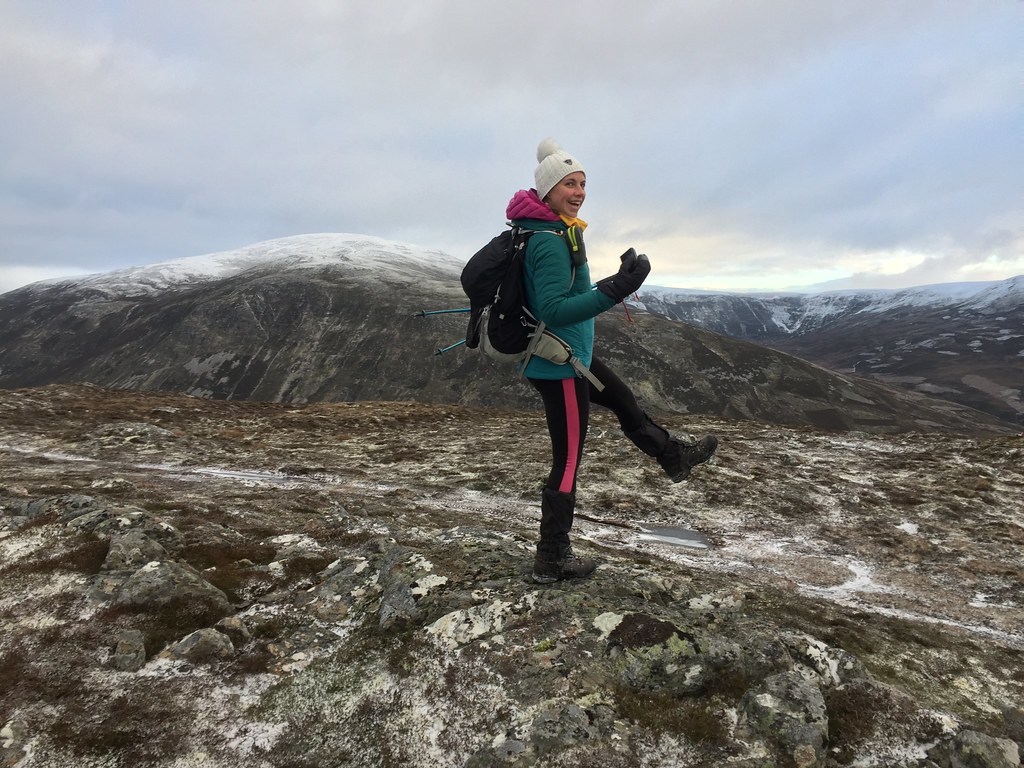 We had originally planned to return the same way, but that was a bit boring, and we were pulled towards Loch Cuaich and Meall Cuaich. As on the way up, it was easy to join up areas of short heather. There were a couple of bits which were tougher and the overall gradient was much steeper, but it didn't take us too long to reach the track along the loch shore. 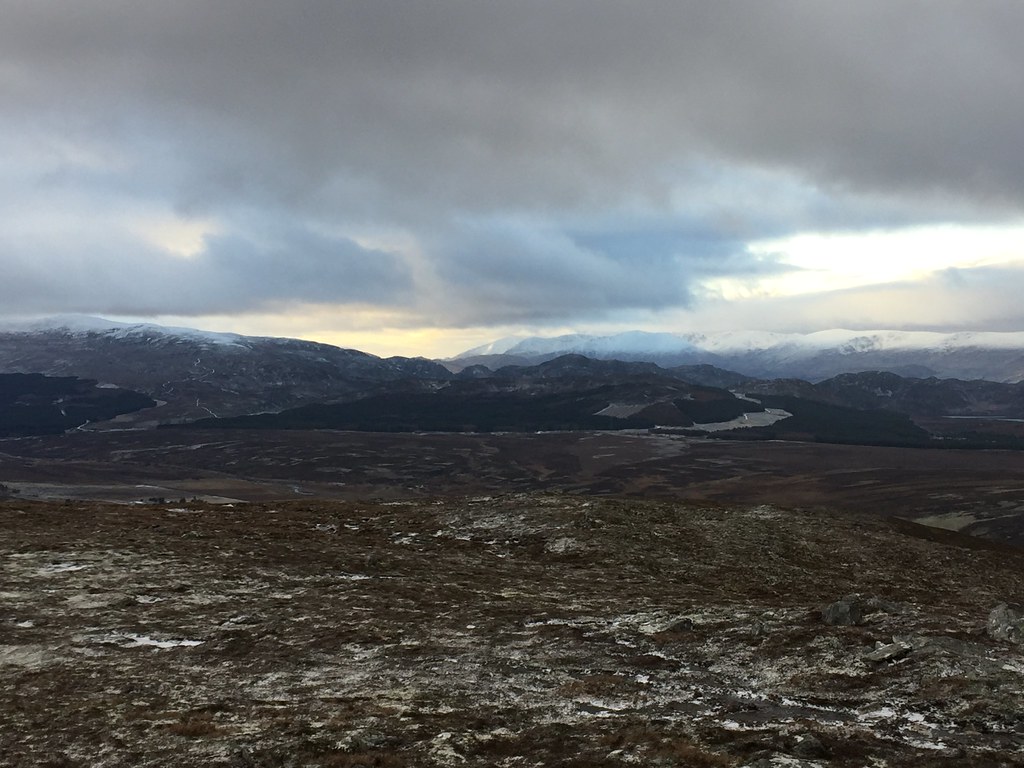 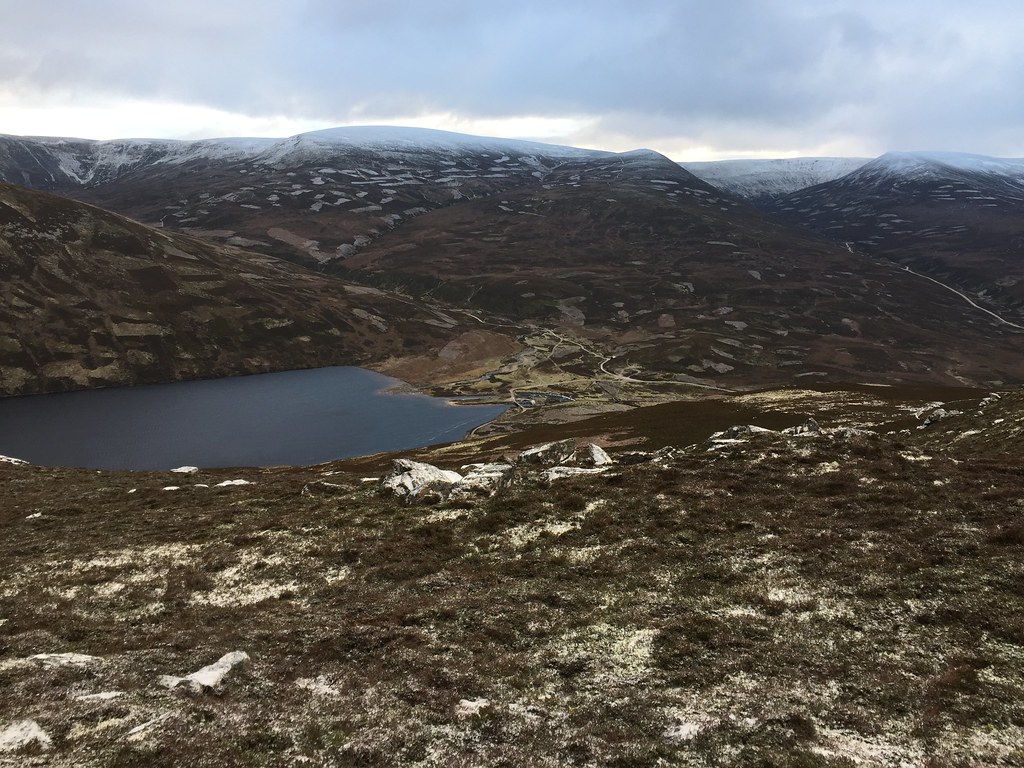 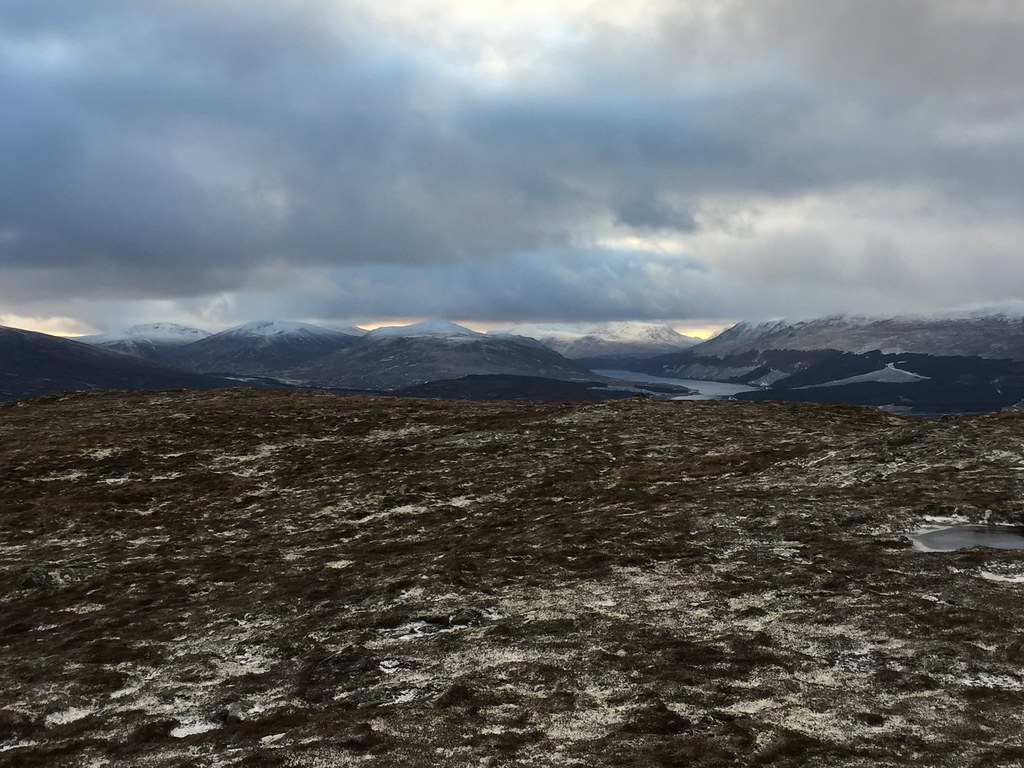 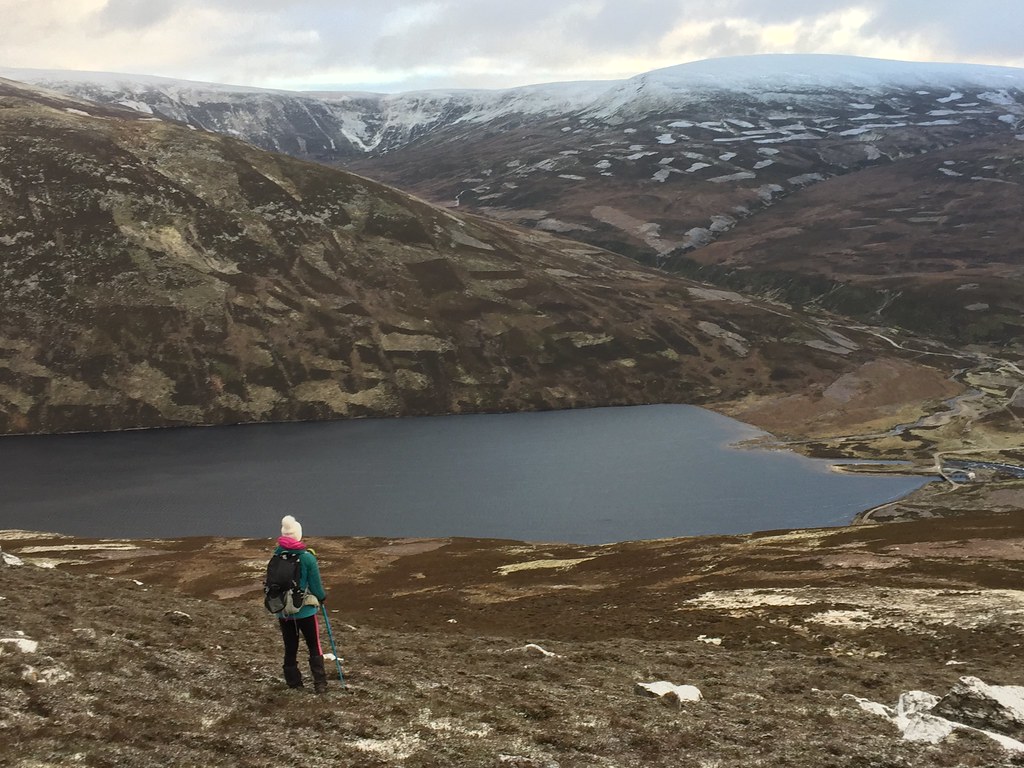 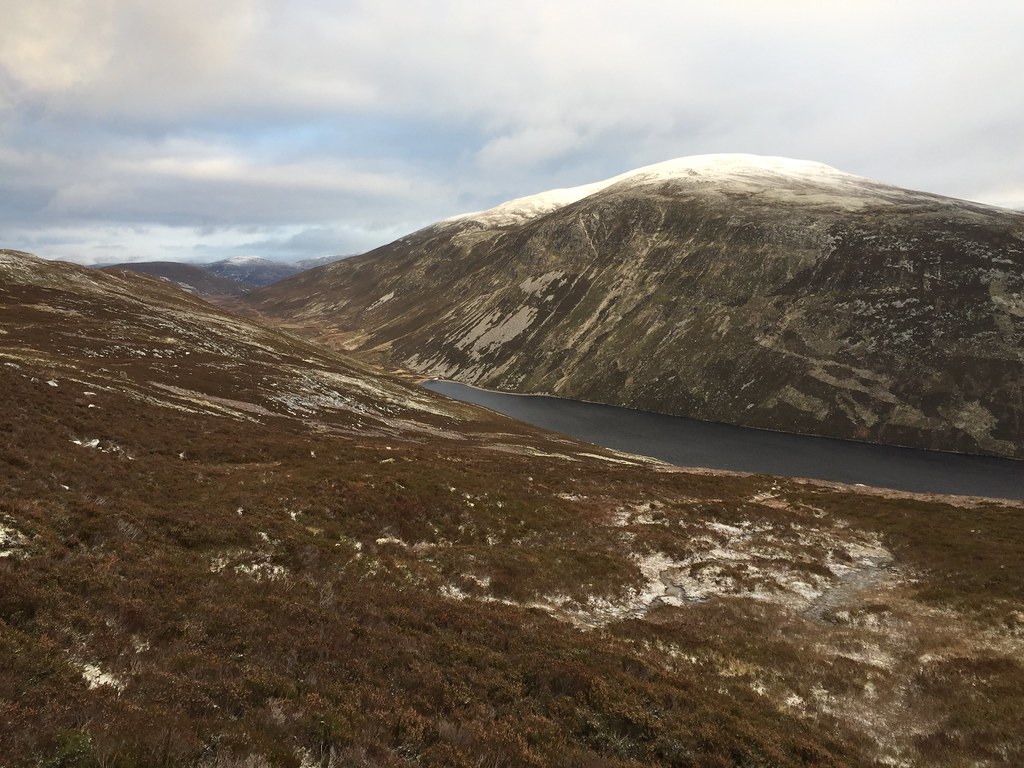 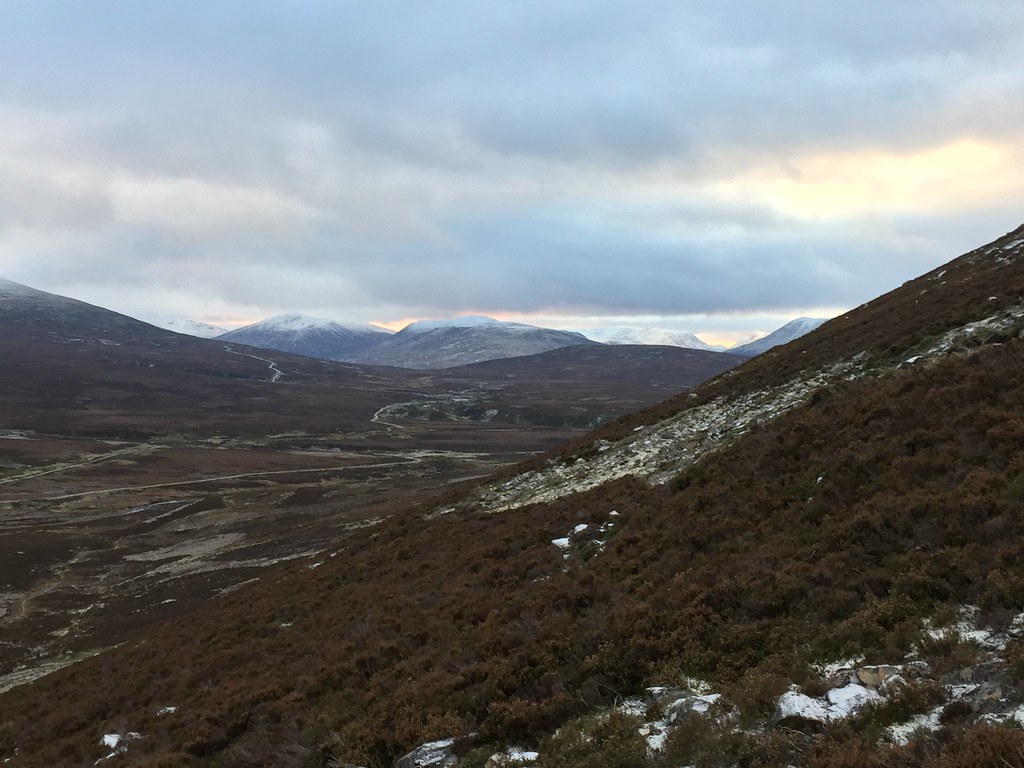 Now all that remained was an easy walk back along the Loch Cuaich track. As usual, Jackie started running out of energy some way into this. A quick break and a bite to eat had us ready for the last little bit, and we were briefly entertained by the last rays of sun on Meall Cuaich when we turned around. 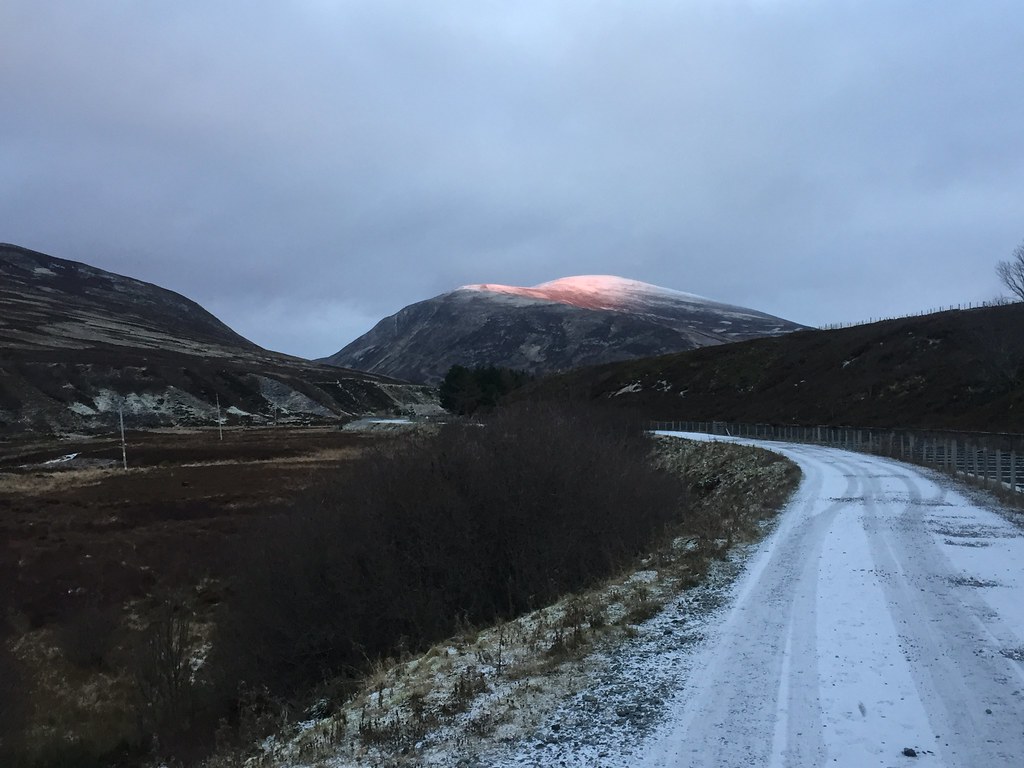 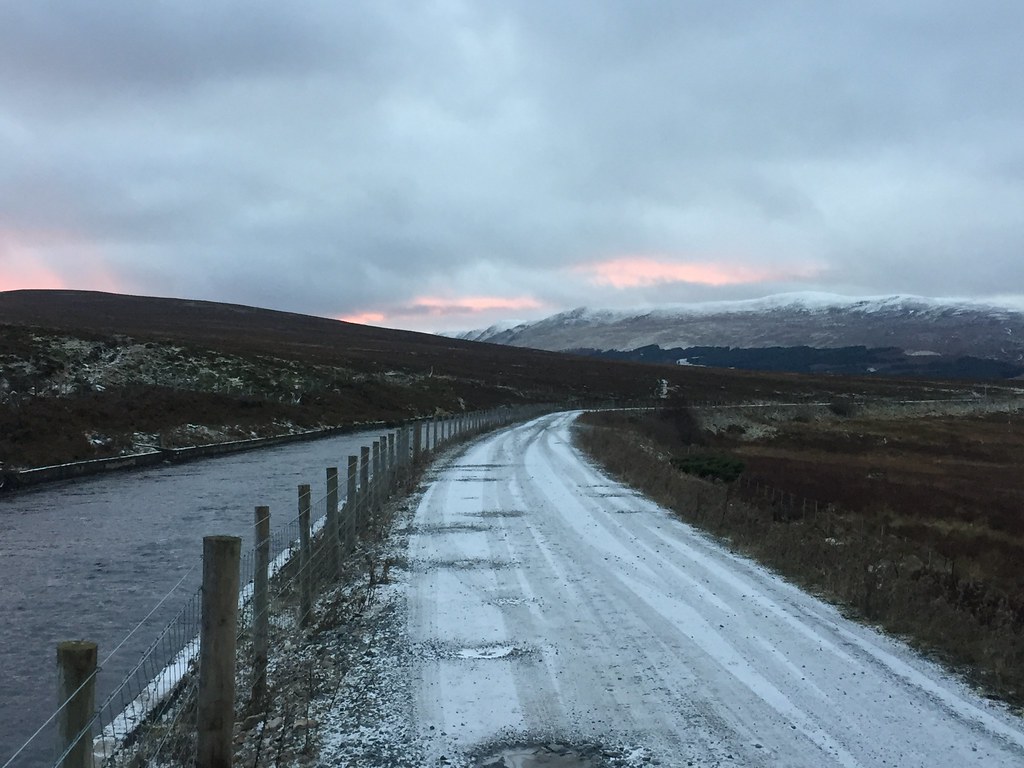 The Fara on the walk out next to the Aqueduct