I have much enjoyed reading other reports over the past months and figured it was about time I put one in. I always feel that my routes are the obvious ones and that no one would be interested in reading about my day out, but here goes.

I am slowly plodding through the mountains known as Munros and have reached the stage of having the odd singleton missing here and there (as well as huge groups of hills!). This fantastic winter day in early Jan demanded that one of these singletons be ticked off.

Having driven the 88 miles from Elgin down past the Cluanie Inn, Sgurr na Sgine via Faochag looked just fine for an assault and off I went. The route was basically straight up the ridge and my hope was that the snow would be firm and would allow easy passge over the steep bits as well as covering any bog and heather. Or, of course, there was plenty of snow but none of it had been through a freeze/thaw process and therefore I had 6 hours of thigh posting ahead of me. Obviously I didn't know this as I looked up the hill.

As I hit the snow line going up Faochag the idea of walking on snow in fantastic weather with great views meant that after just a short time out of the car this was already a great day. 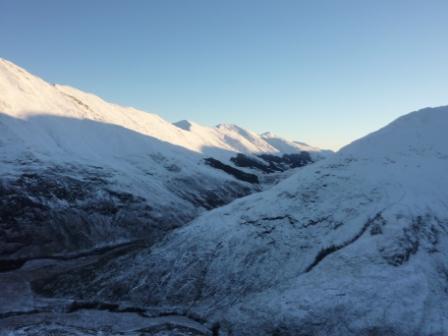 The snow got deeper and as I crested along the ridge of Faochag the wind had blown the snow up into a knife edge which I didn't fancy so a took the eastern side which looked the lesser of two evils and plodded along under the ridge testing the snow as I went.

It is only from Faochag that you get to see the days objective and it did look a bit further away than the map had suggested. As, I have found, mountains often do. The snow got deeper as I came to the final slopes of Sgurr na Sgine and on one slope the snow was so deep that I began to wonder if I was going to be able to summit. I was taking two steps up then three back, however with the help of some rocks, an ice axe, and some swearing I was up onto the top with only the undulating plateau left to the summit cairn. Although once again with the deep snow this took some time.

The views were amazing and totally worth all the effort. To get off the top I had to head south first and then when the crags ended and I felt brave enough I picked a line down and around heading for the bealach above the Alt Coire Toileil. Once again the snow was very deep but good fun and it was as I got to the bealach that I saw how impressive the crags look just under the summit. 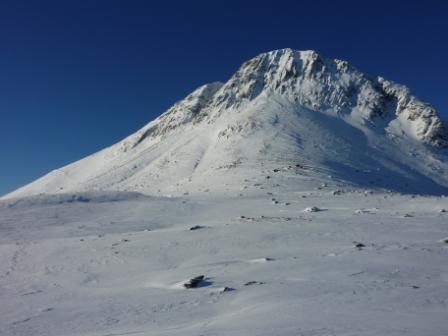 Anyway headed off down the slope to try and pick up the main path coming down from the South Cluanie Ridge. Deep snow once again but it covered all the heather and bog yet the depressions still allowed me to see the stream when I got to it.

Made it back to the car in 6 hours, really good day out and I always think that days flogging across the hills in the wind and rain disappear from the memory after one day like this, or at least redress the balance if you know what I mean.

Great report, I felt tired for you at the end of it....hate deep soft snow

You did well to summit in that but the view looked fantastic so I'm sure it was worth it.

Really enjoyed your post, I don't think there is such a thing as an 'obvious route' cos every day is different so keep em coming - its great to share in your hard work and effort from the comfort of my armchair

Lovely photos and report. Now you've done one report you'll have to keep up the good work and do more.

Always worth putting a report in, especially with photos like yours, cheers!

What a day and wonderful snow conditions you had (even if it was hard going at times), I love the region having just got back from there. Looking forward to more of your reports.

good report, especially the snow conditions, i would have thought and hoped the snow would be firmer above 7 or 800 metres, im up there next week and hoping to do the forcan ridge and this munro, heres hoping your steps are still there, might make it a bit easier for me !

My first report on here was for Sgorr a Bhac Chaolais and Buidhe Bheinn, just east of Sgurr na Sgine. In fact I came down the same corrie as you did. Looks interesting getting off Sgine from that direction.

Great report and fantastic pictures. It loks like you had a great day for it, even if it was tough going in the snow. An area I really want to visit later this year.