Cnoc Corr Guinie, nice easy one in the snow

Cnoc Corr Guinie, nice easy one in the snow


Looking at what nearby small hills I could do in the current lockdown conditions to have the occasional change from exercising from home, I realised that there was a local sub-2000 I still hadn't got round to doing - Cnoc Corr Guinie. Probably the only new summit I'll be ticking off for a while, so nice to get it done this afternoon.

I parked just off the Struie Rd next to some wheelie bins at the entrance to a forestry track, and continued up the snow-covered track through the open gate and then immediately turned left along another track and through another gate. After about 100m there's a junction and this is where to take a sharp right to start heading up. I stayed on this good, main track walking up through the nice powdery snow and ignored any tracks or fire breaks heading off to the left. 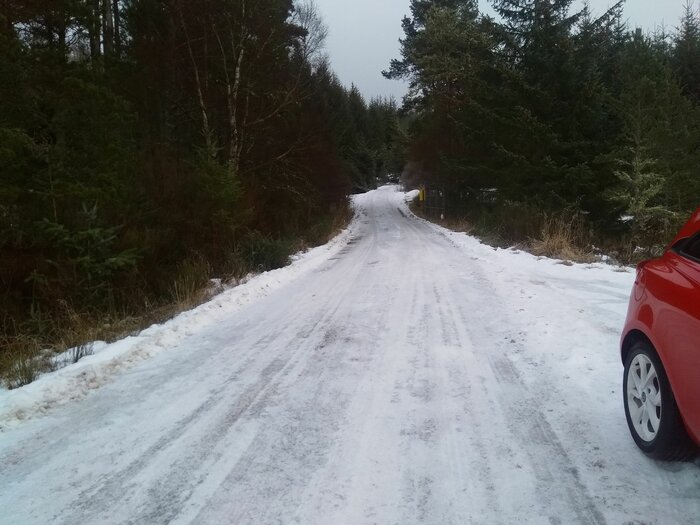 Start of the walk, just off the B9176 Struie Road (directly behind me when taking this photo). Head up here through the open vehicle gate (which you can't really see in this photo) and then take the branch you can just see going to the left 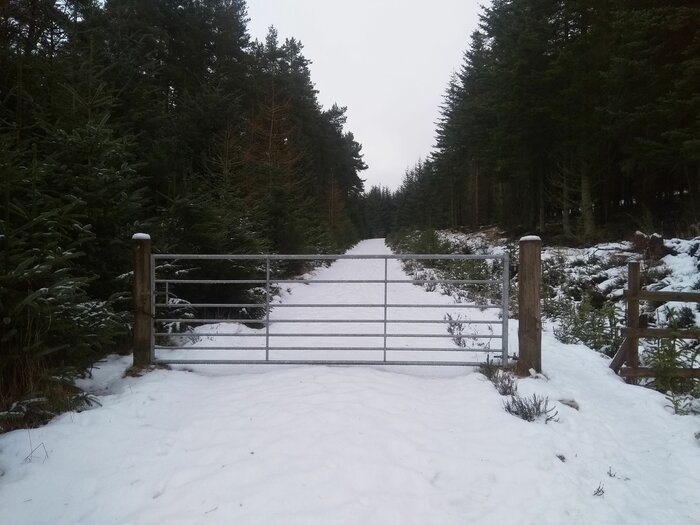 ...taking that left branch gives you this view. Past the open gate and about a hundred metres further on, take the right turn, almost back on yourself but heading upwards 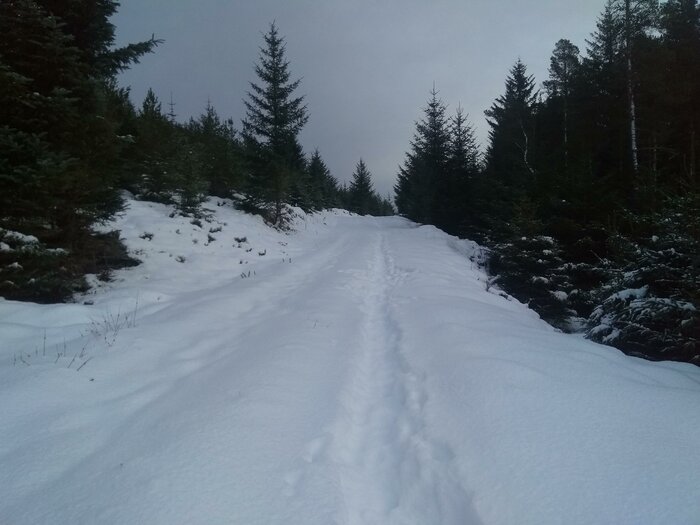 Even in snow, it's a good track, makes for an easy, gradual ascent through the forestry

Eventually, just before the forestry ends, there's what looks like a bit of a turning area and a smaller track goes straight up from there to the left, up to the summit area. The snow got increasingly deep up here, knee deep on the way up, then once at the top, sometimes even thigh deep in the bits when I stepped between, rather than on, heather tussocks. 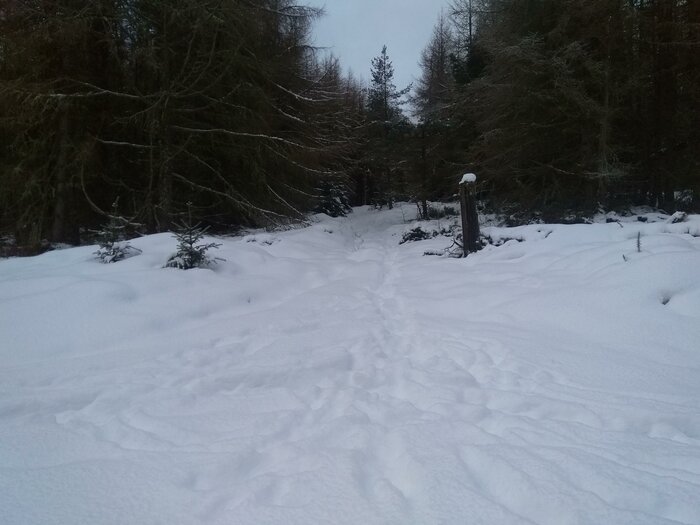 Just before the track comes to the end of the forestry area, this path/track with a pole by it heads up to the left, taking you up to the top of the hill 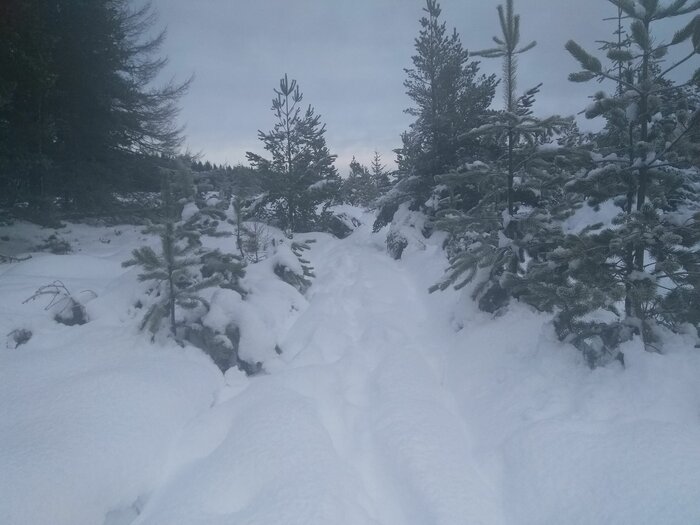 Snow getting deeper as the path heads up, but still nice, soft snow to walk through today 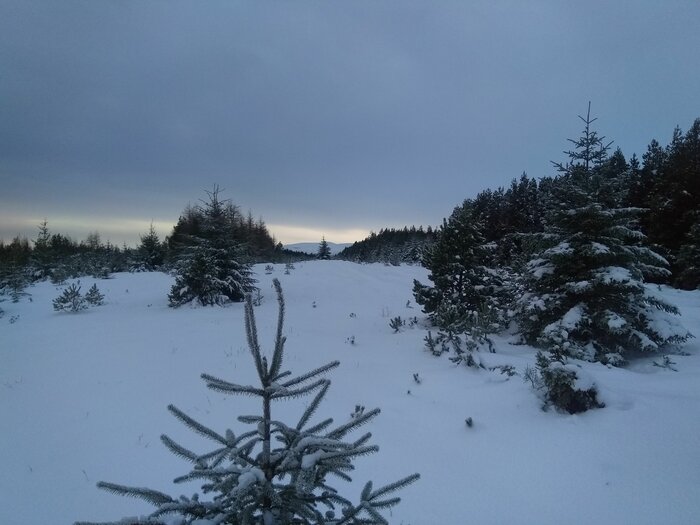 It's not a spectacular summit - in fact, there's not a particularly well defined summit point, at least when everything's covered in snow. It's just a strip of clearance in amongst the forestry which does have a cairn at the eastern end, though the high point is further to the west. 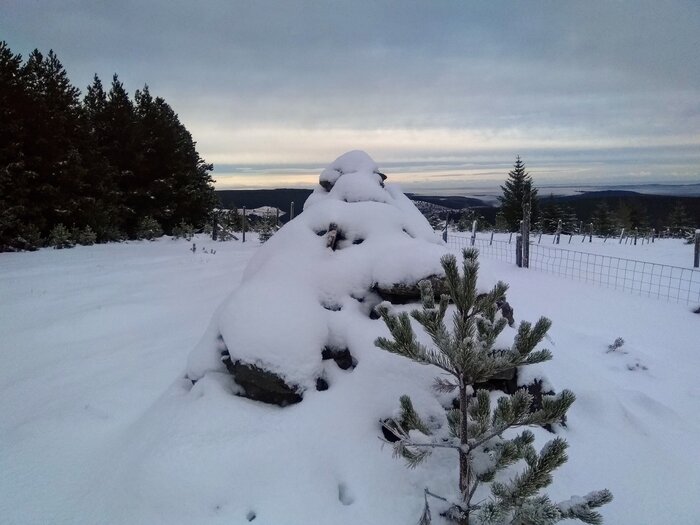 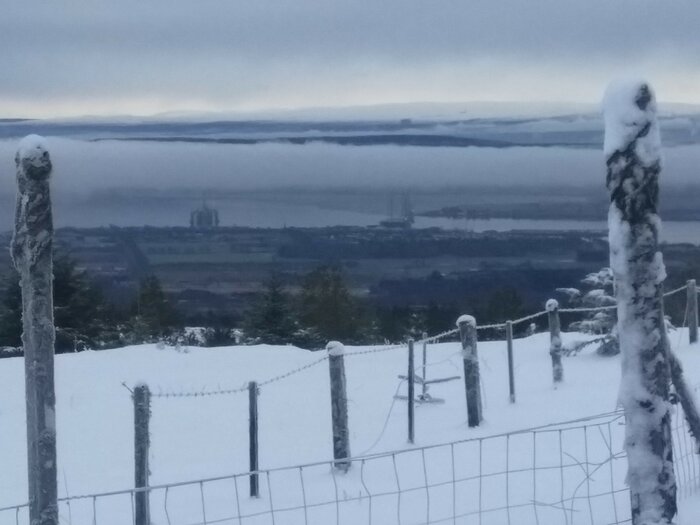 Zoomed down to the rigs in the Cromarty Firth, lurking under a low bank of cloud

With the snow being pretty deep I decided to just re-trace my footsteps back the way I'd come rather than wade through the snow to take a different route down. There was hardly a breath of wind and the cloud stayed above these smaller hills, so although it wasn't an epic trek by any means, it was a nice, enjoyable straightforward hillwalk.