The sun was out and the mountaintops had an agreeable dusting of white as I made my way into Sutherland, hoping for a short walk before my last w*rk day of the year.

I wanted to pick off one of two little hills on my list, although when I saw they were both below the snow line I was tempted to put it off until it was a bit whiter.

Still, brown is a perfectly respectable colour, so I parked in an equally-brown layby and (since black apparently goes with anything) set off up the Black Crag towards Ben Hiel.

The first stage followed a well-used track towards a little clearing with some old concrete structures and a low wall that reminded me of an abandoned train station. I don't think it was one, and don't know what it was, or whether it had anything to do with the old quarry next door. Next was an easy climb over heather to a series of lumps leading, eventually, to the big one. On the way I was disproportionately pleased to find little rings of snow lying in the grass - an early bit of winter venturing towards the warm lowlands. Clouds were blowing in from the north and a couple of grey banks passed over on the way up. The first furnished a fleeting flurry of frosted flakes, in what could almost have been a symbolic snow-shower for the sightseer's sake. 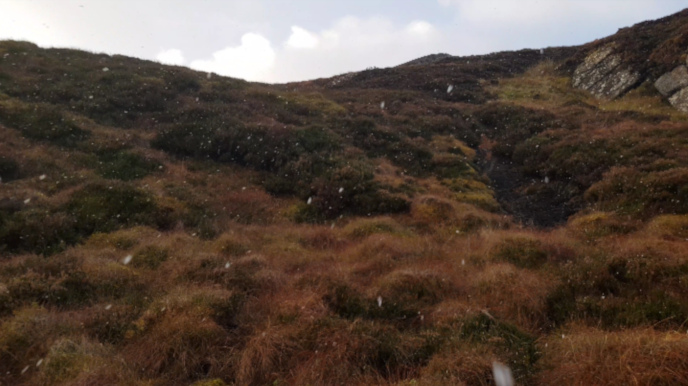 Further up there was some crunchy snow lying in the sheltered spots, and some of the pools had an icy crust. 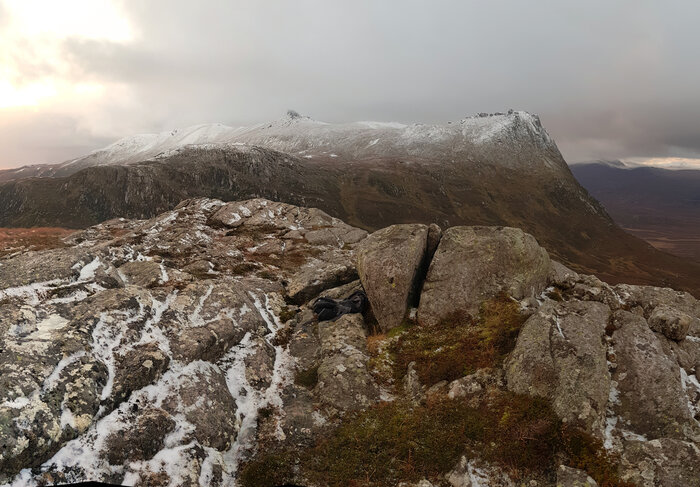 The second bank of cloud put some fog around her and Cnoc nan Cuilean, but it soon passed leaving a clear view across Sutherland. Towards the bottom the grassy landscape was criss-crossed by 4x4 tracks, some of which were almost heading my way. The going was fairly even back to the lay-by.

I'm a fan of this part if the world anyway, but this little walk proved better than I'd hoped with some frosty views and a top to match - definitely worth the drive. And the obedience class? Well, I spent a good hour walking to Hiel.

Hiel.gpx Open full screen  NB: Walkhighlands is not responsible for the accuracy of gpx files in users posts

What a difference a week makes! That dusting of snow gave you totally different views from mine just one week earlier - great pic of Ben Loyal.

"The first furnished a fleeting flurry of frosted flakes, in what could almost have been a symbolic snow-shower for the sightseer's sake."
Quality aliteration (and punchline at the end!).

A hill also I've pondered so good to see an account of it and that it has views to inspire a visit there.