All week i had planned to do Meall a'Bhuiridh and Creise, then on my way home take in Ben Challum. On Friday the forecast from MWIS predicted 90% chance of cloud free Munros

, it was change of plan time!. My group was doing the Clachlet Traverse in the Blackmount Range so i thought i would join them and make it an epic day, with a forecast like that i wanted to stay out all day. Two of these Munros, Stob a'Choire Odhair & Stob Ghabhar, i had did in November solo.

We parked a couple of cars at the finish and drove back to Victoria Bridge, we started walking at 9am.

200M North of the carpark you head West on a landrover track for 2K, take a right at the green hut and follow the distinct path NW for another 2K. This should bring you to the SW ridge of Stob a'Choire Odhair, 770M ascent now lies ahead 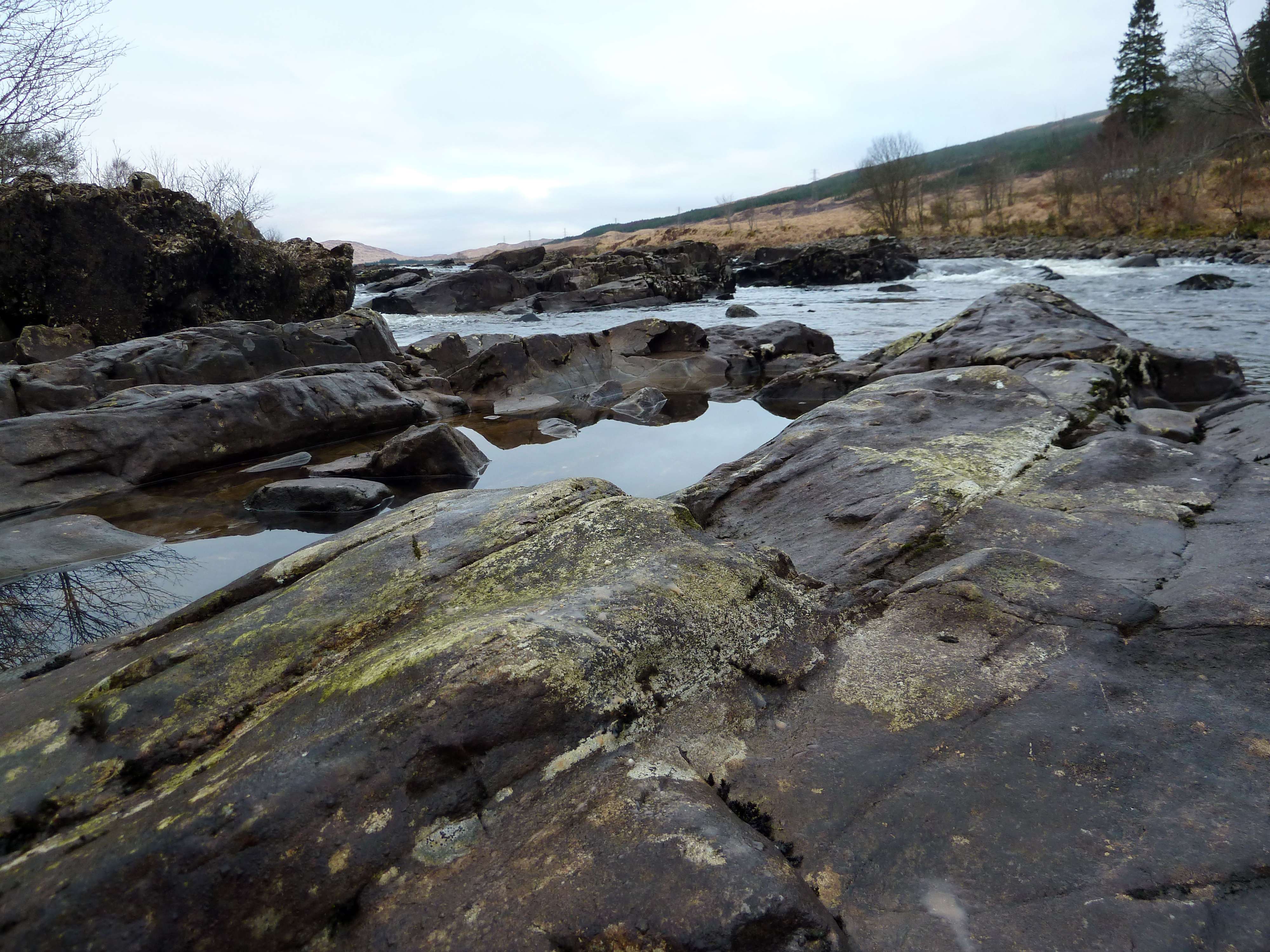 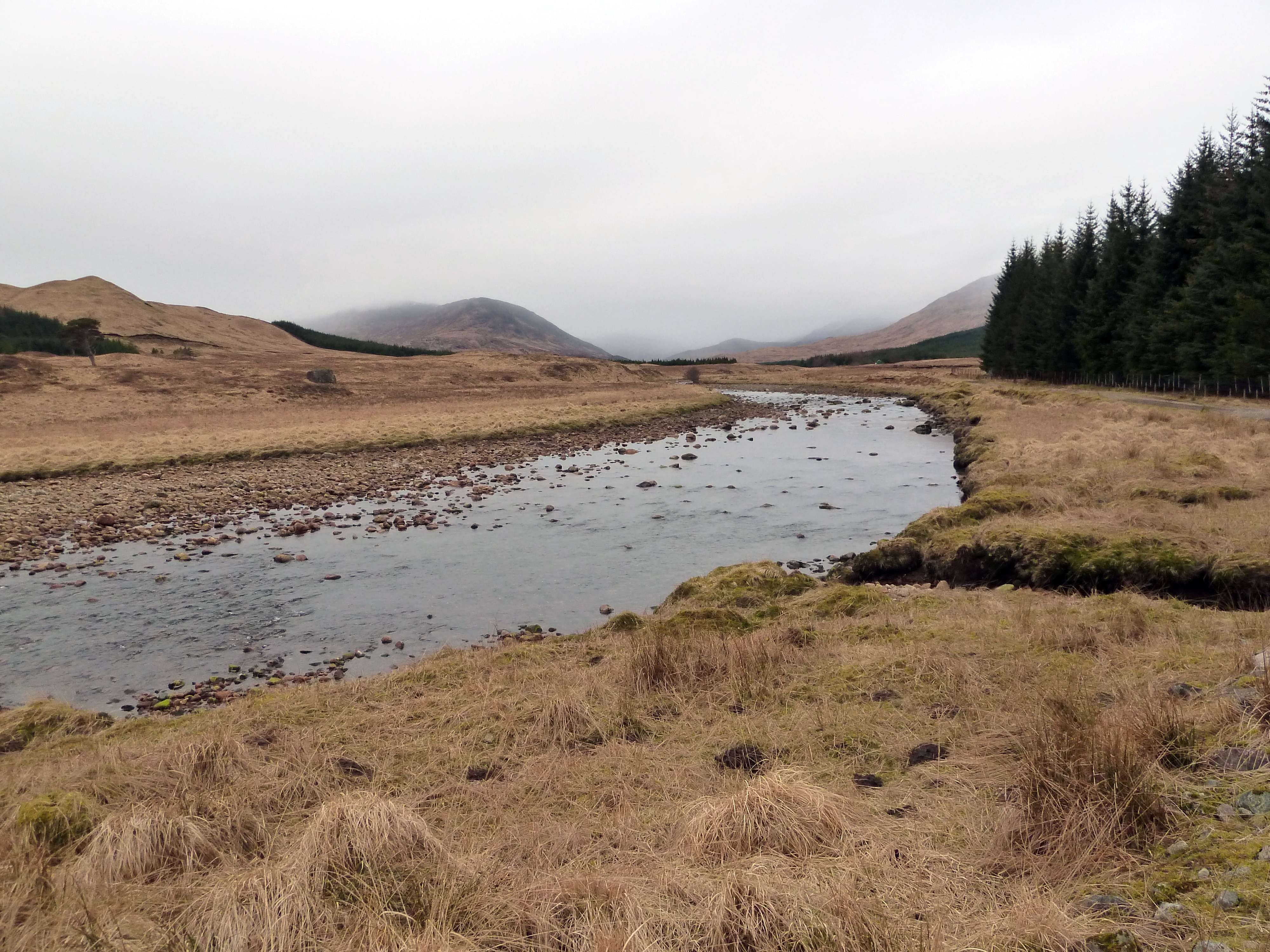 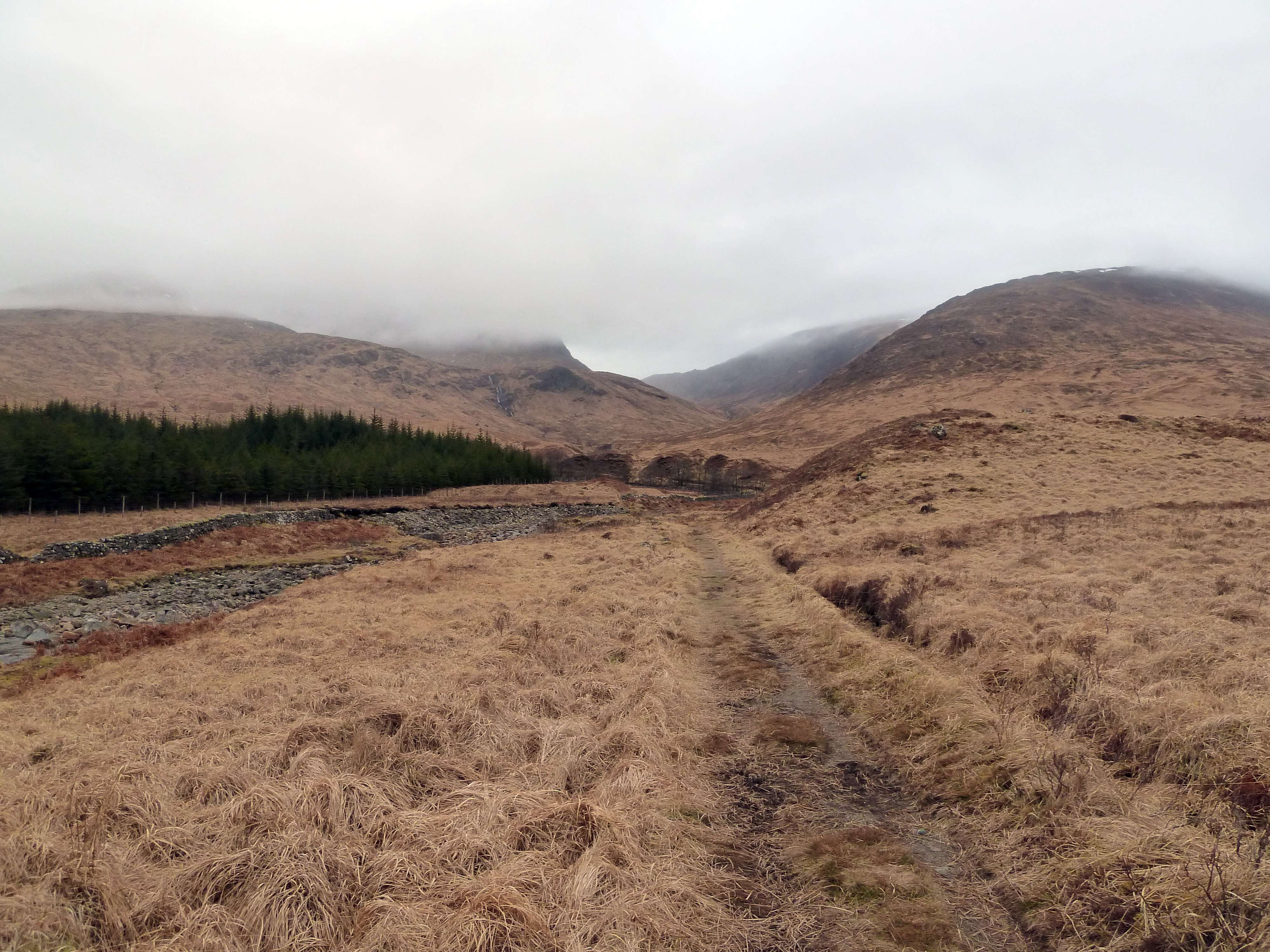 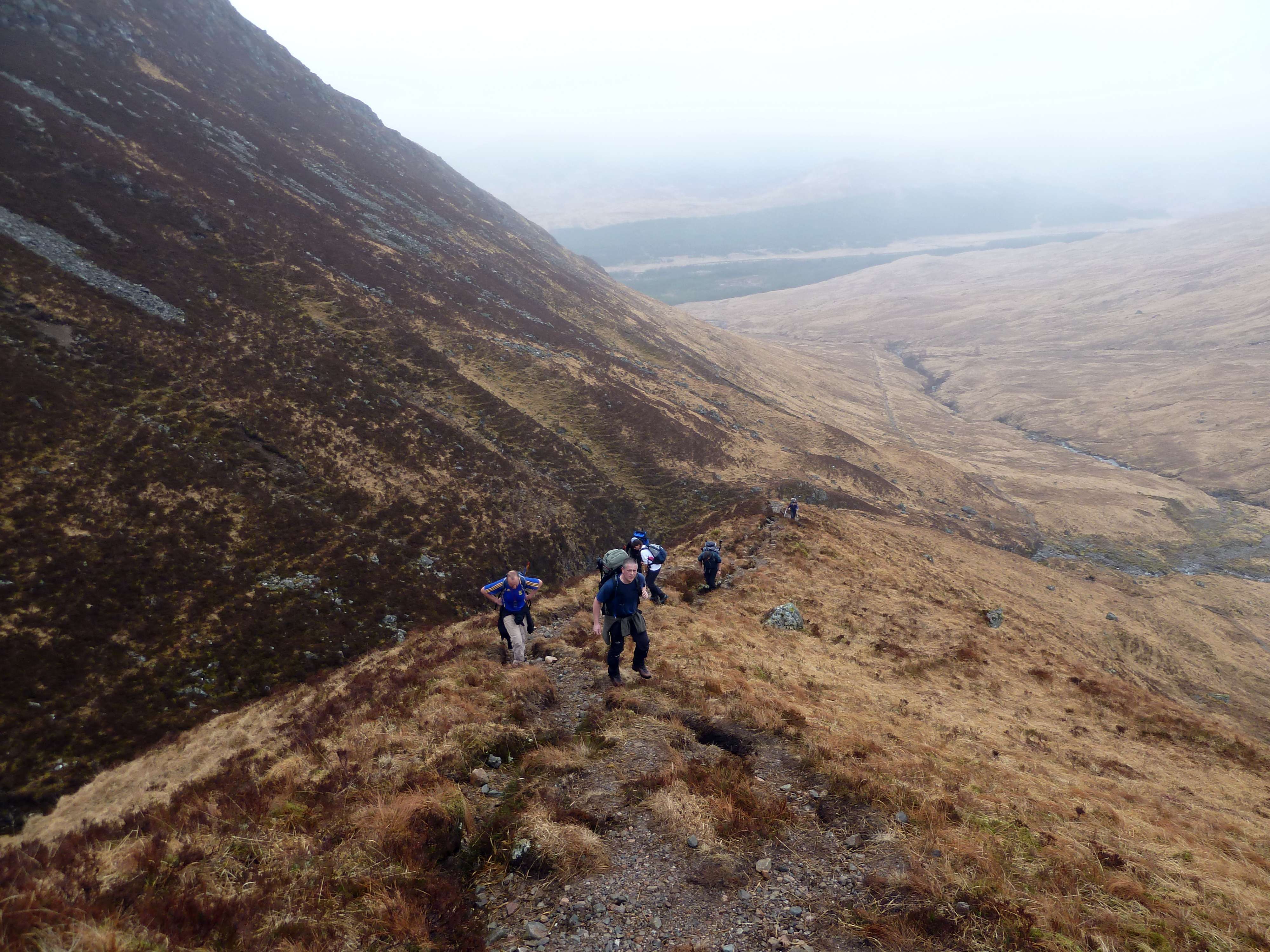 We headed up the ridge, this was tough going for some. The weather was not as forecast with cloud below 500M and a constant drizzle showering us, but it was warm as now wind....don't think any views to be had today, or photos

We got to the Summit of Stob a'Choire Odhair in 2hrs. Quick bite to eat and we headed West to Stob Ghabhar 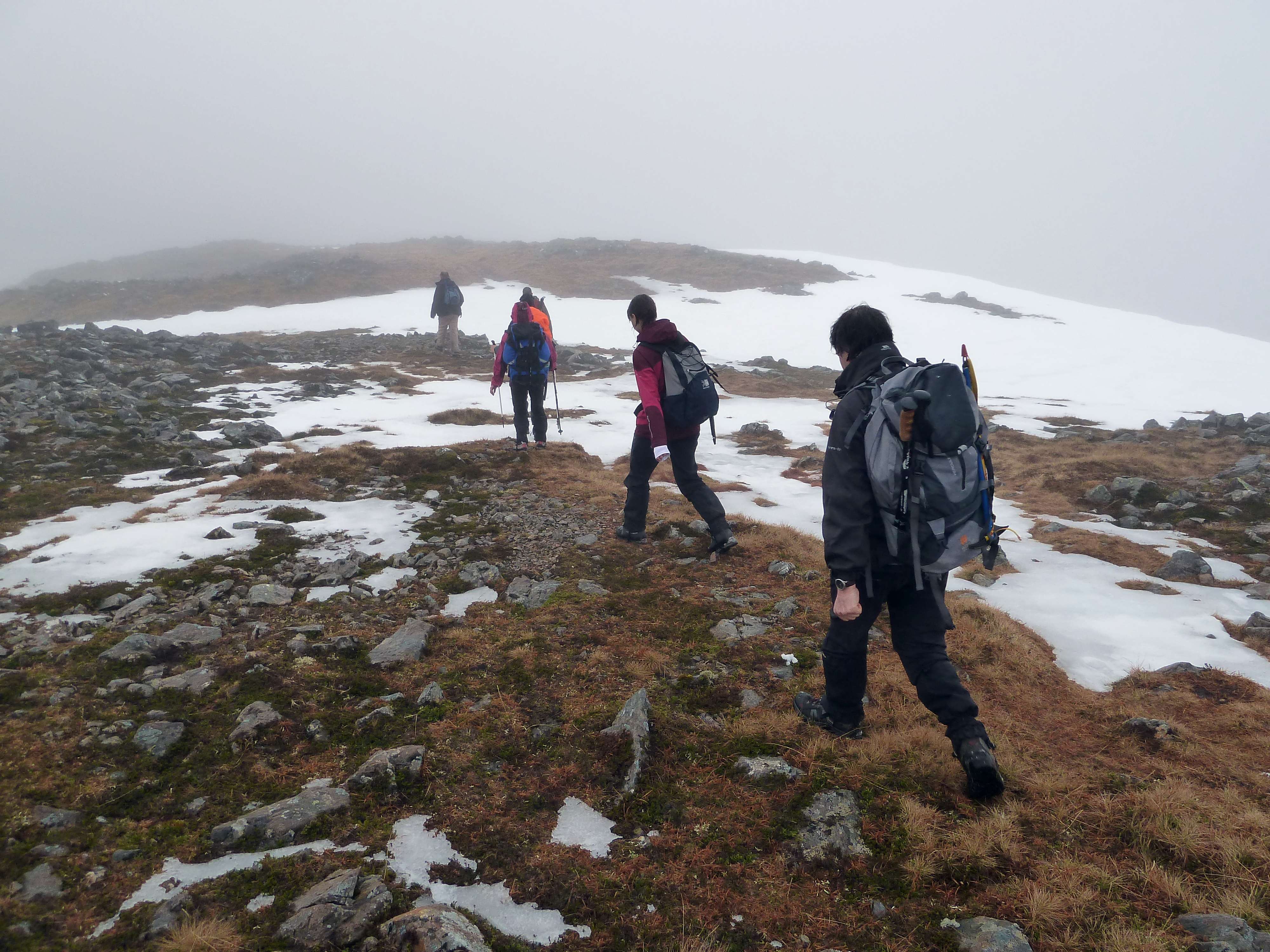 The ascent onto the Aonach Eagach ridge was steep, we had snow and some ice underfoot but only an ice axe was required....still no views!

I was curious to see how this short ridge section would present itself as when i did it in November it was covered in fresh snow, a sqeaky bum moment for me back then

The ridge had very little snow and presented no difficulties at all. 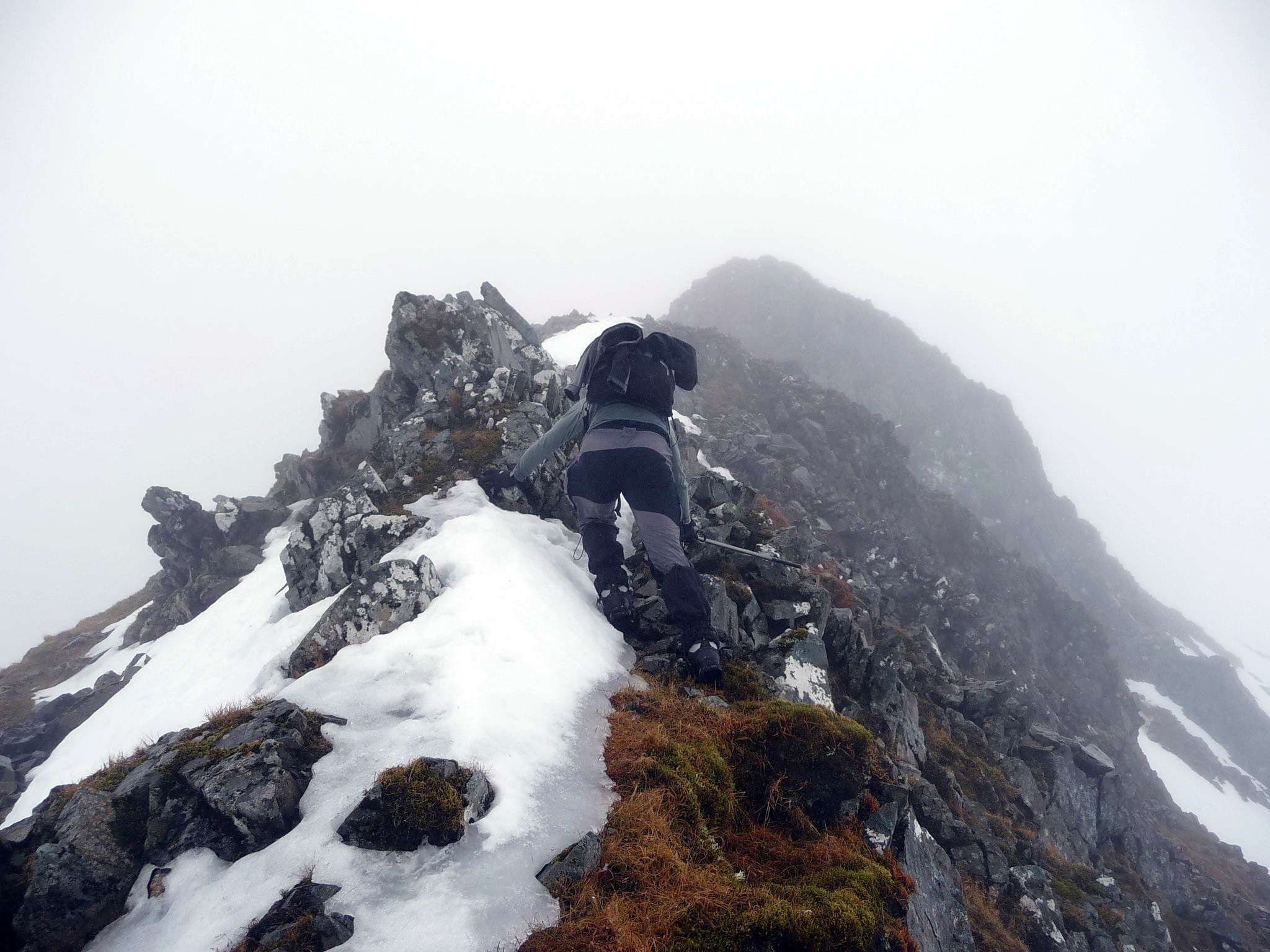 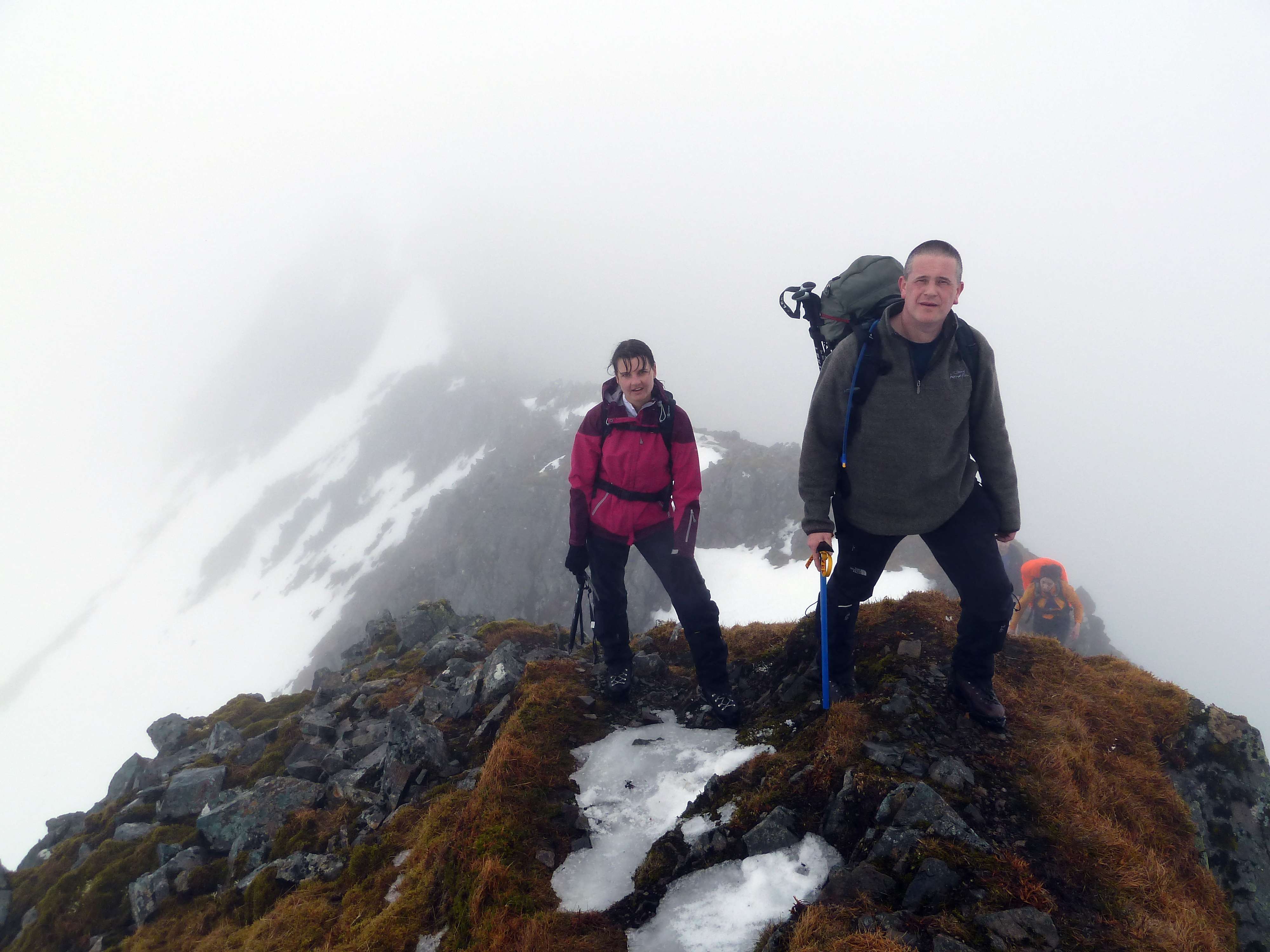 Stob Ghabhar was reached in 4hrs - we had a 30 min lunch break.

The next part of the walk was virgin territory for me, and for all of us. We would have to take care with route planning.
Gordon had a GPS which we used a few times just to clarify our position.

We headed North for 1.5k along the Aonach Mor ridge then NW for 600m. The GPS confirmed our position and we took a NE line down to the Bealach Fuar Chathaidh.
At this point the skies cleared and we got some welcome views - Clach Leathad, and its SW face, lay ahead....it looked rather steep 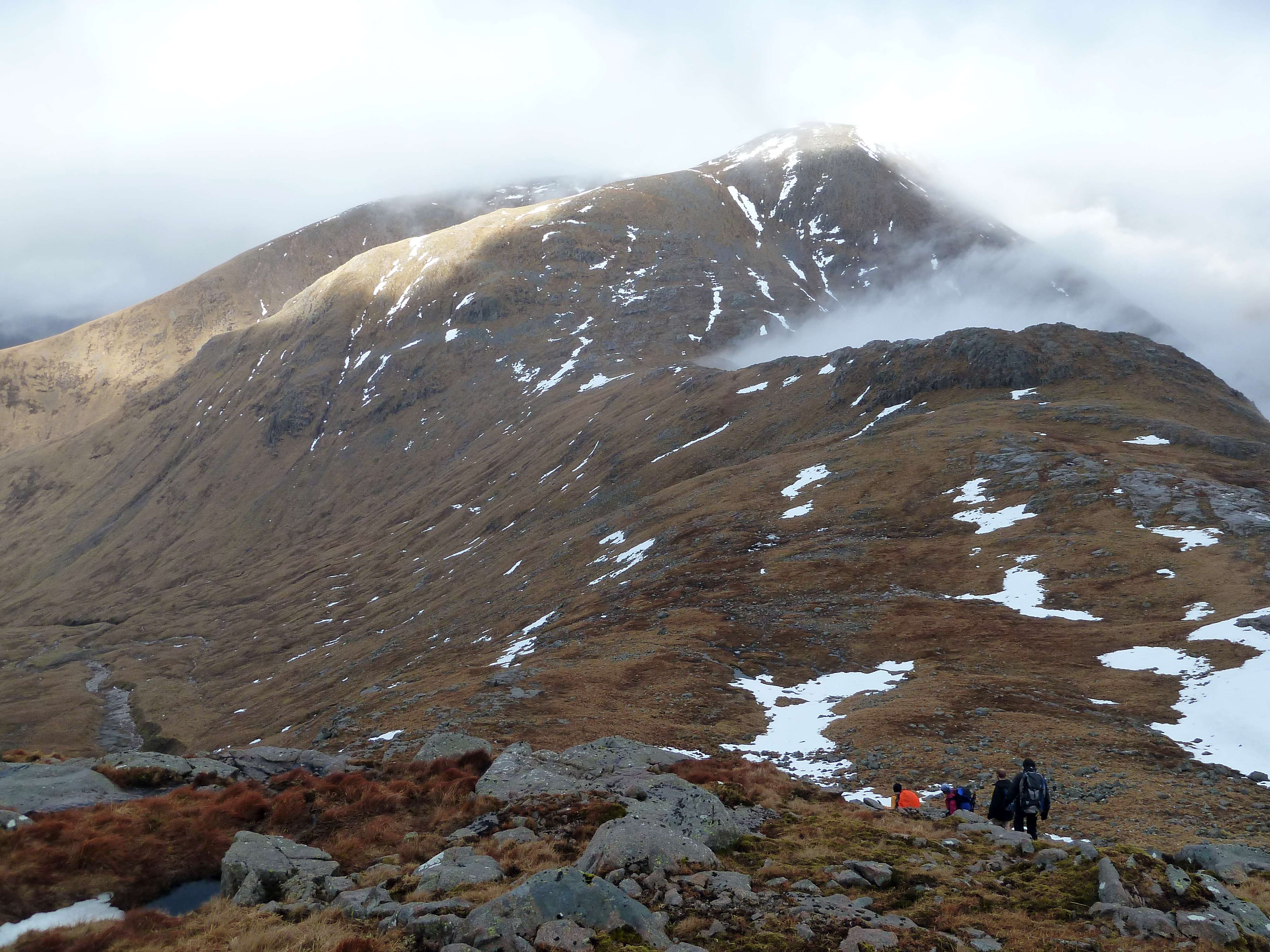 Soon everyone was at the summit of Clach Leathad....."is this the 3rd Munro" nope!

We knew we had enough daylight to finish this so from now we took it easy.
From Clach Leathad its a straight Line North 1.5k to Creise 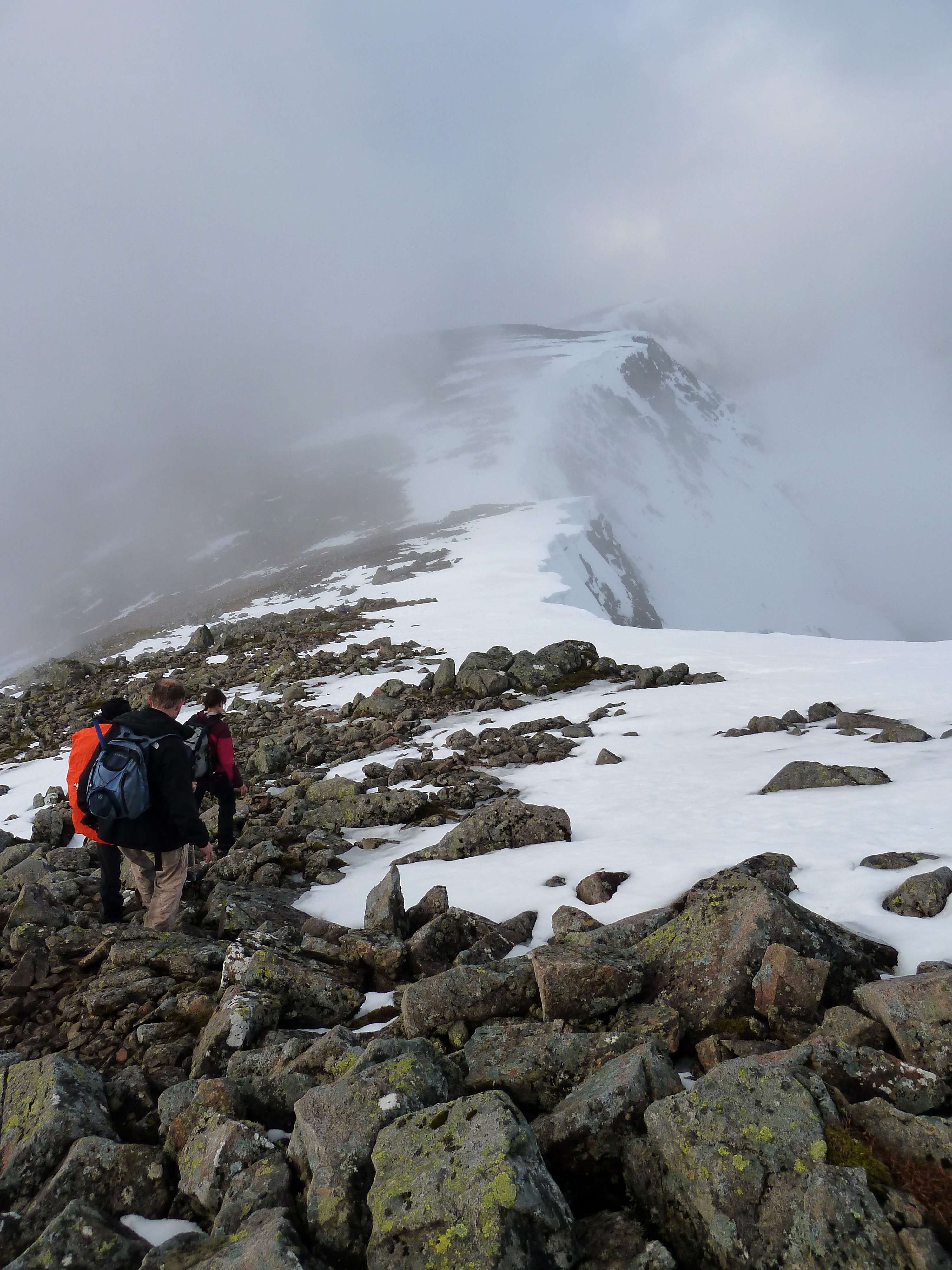 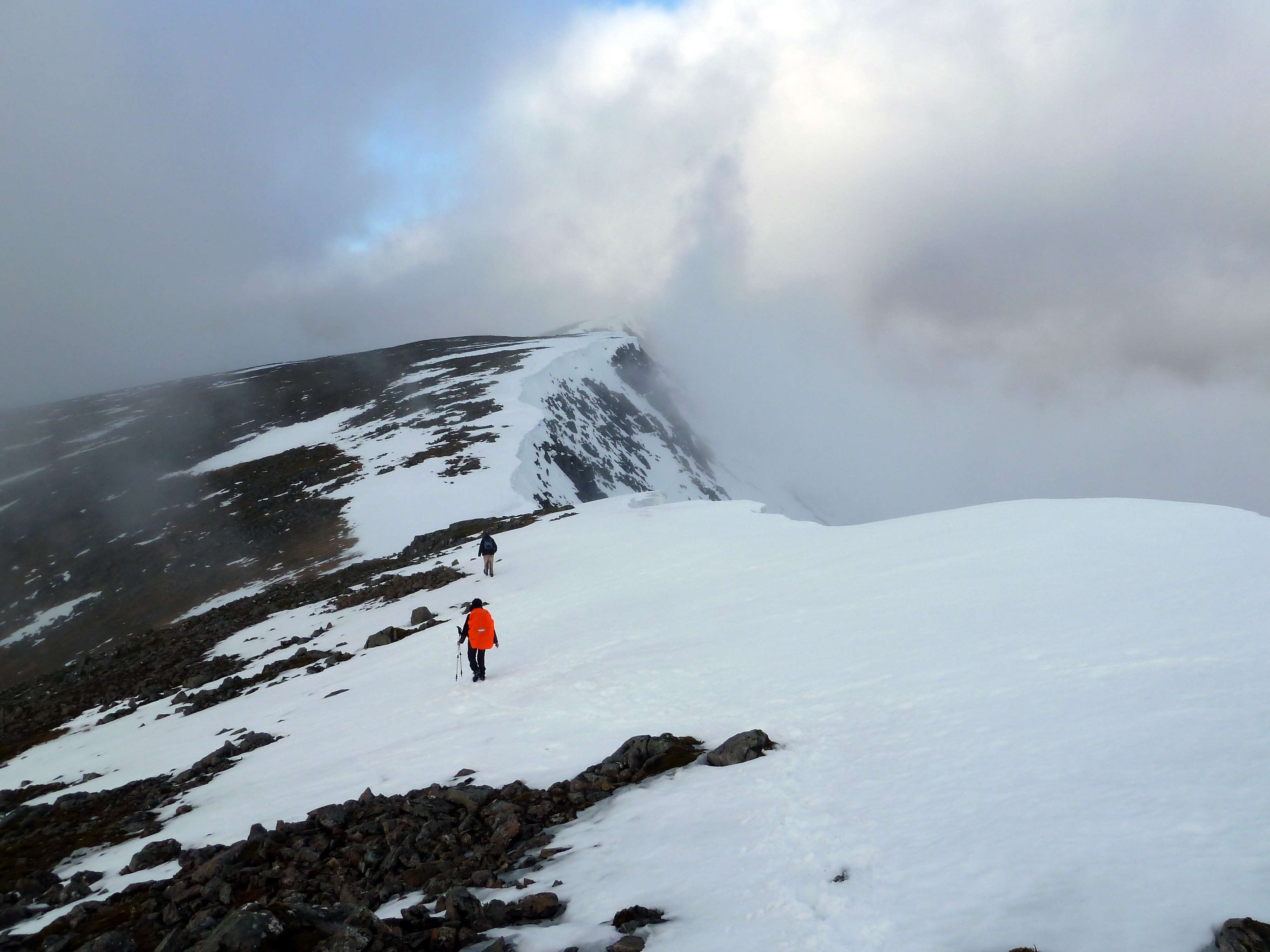 It was time for some sillyness in the snow..... 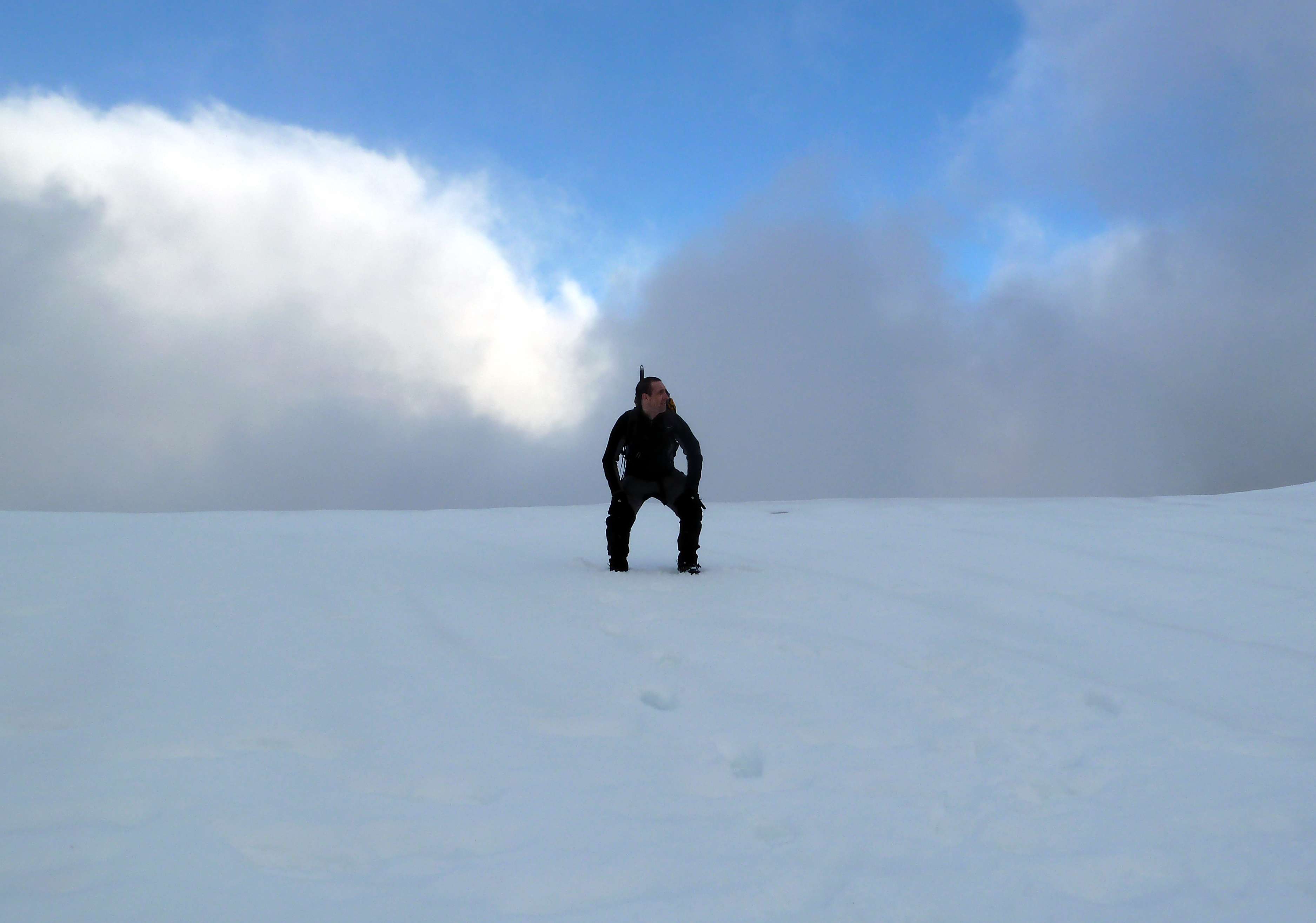 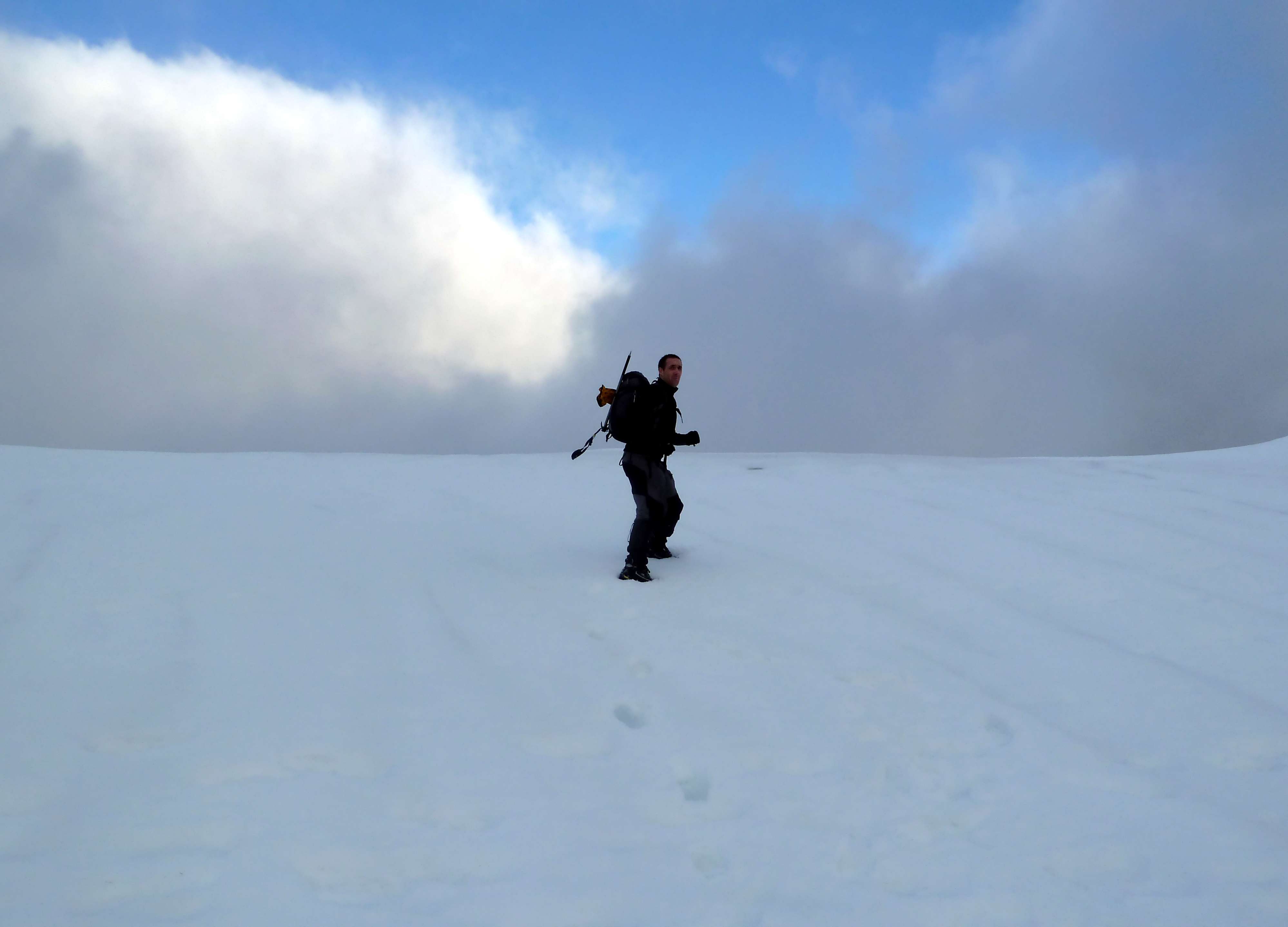 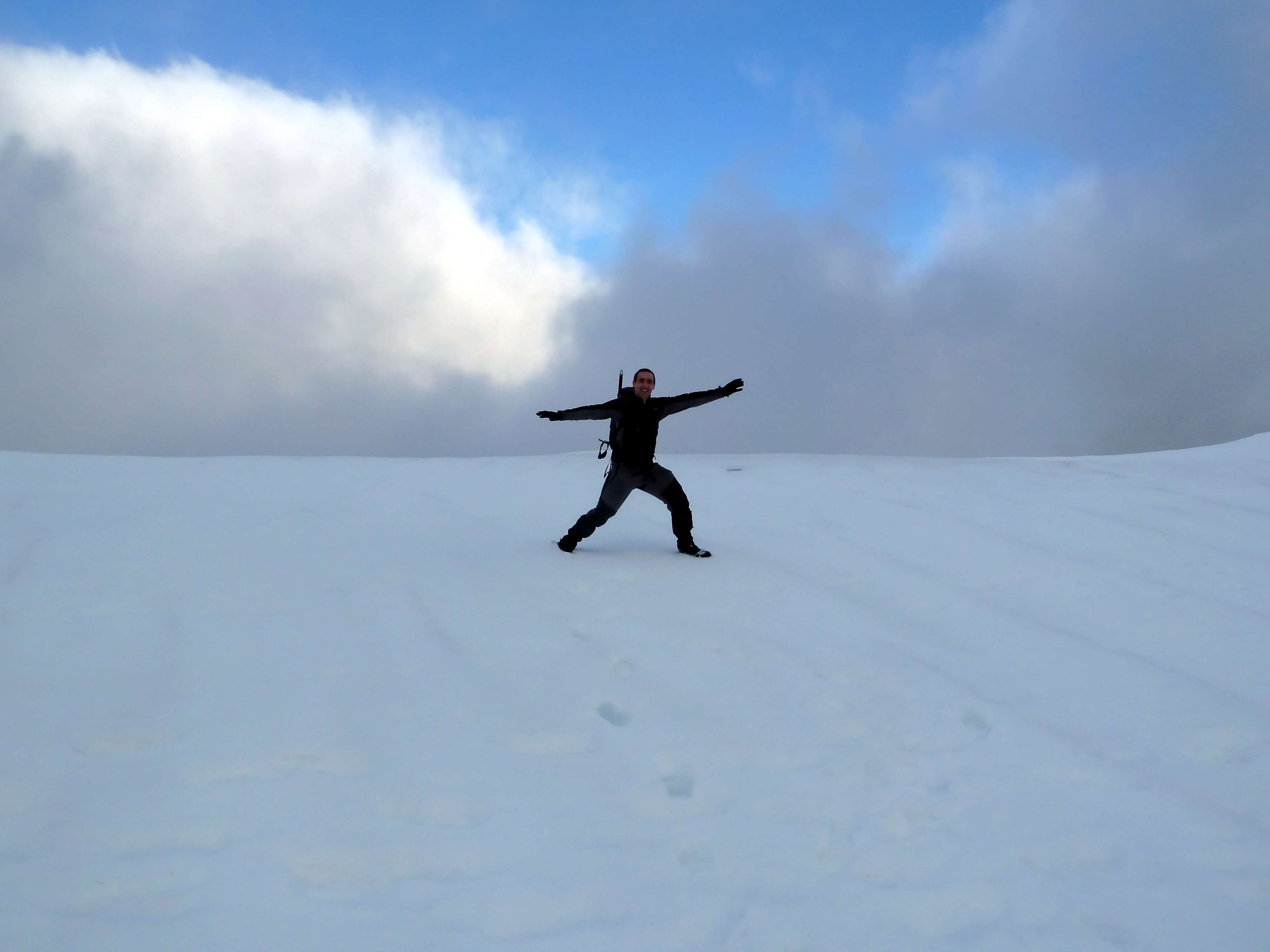 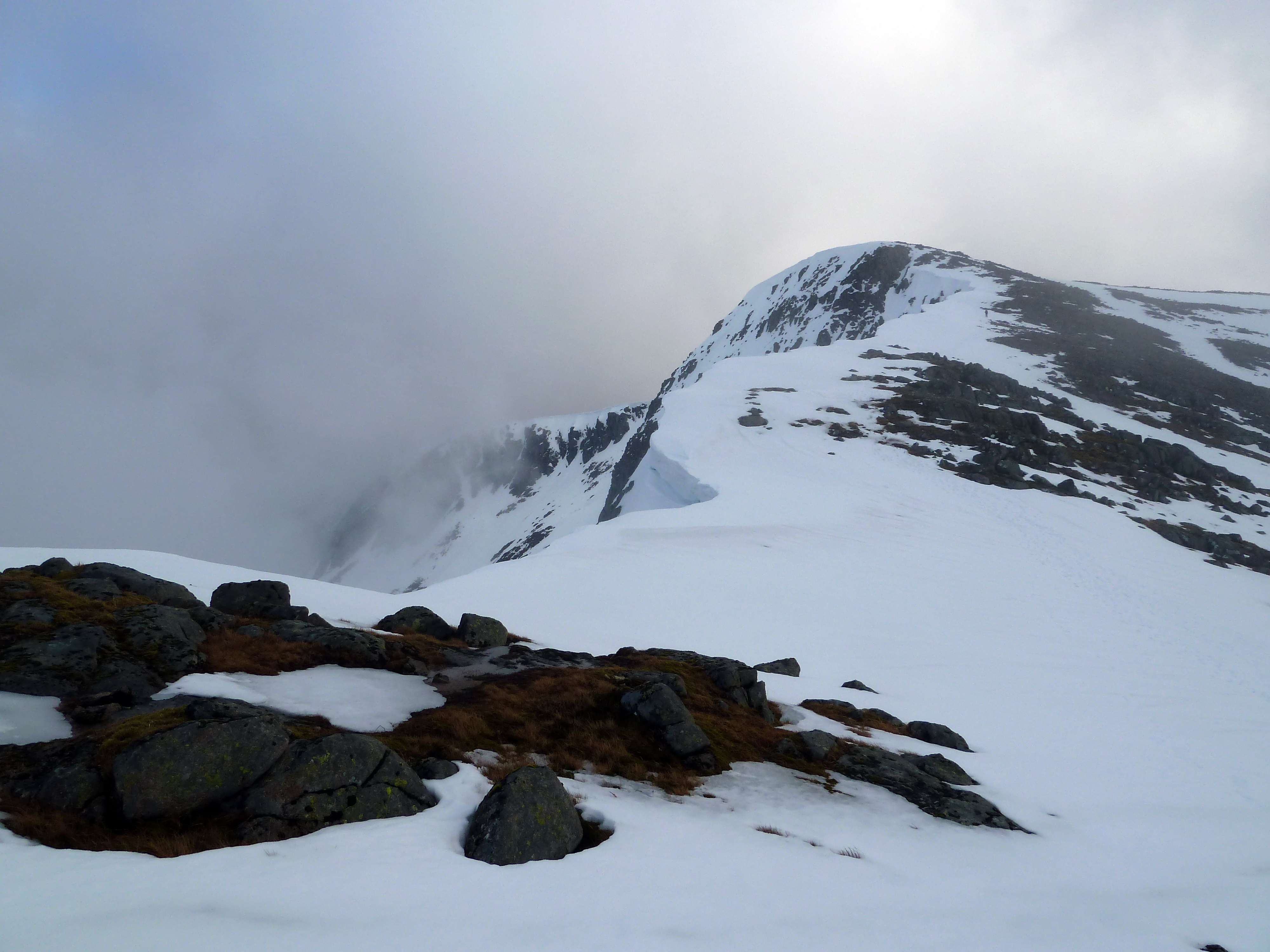 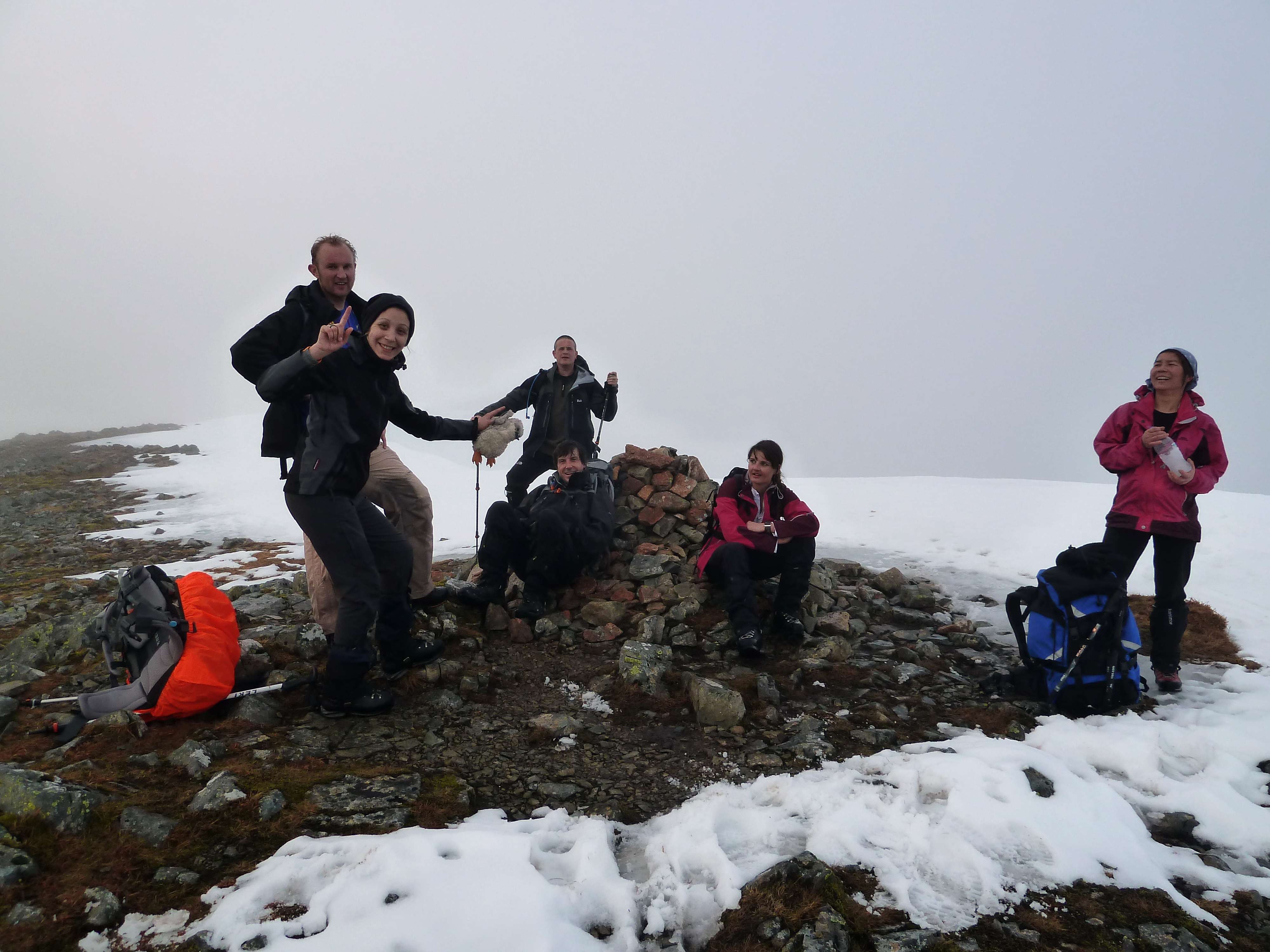 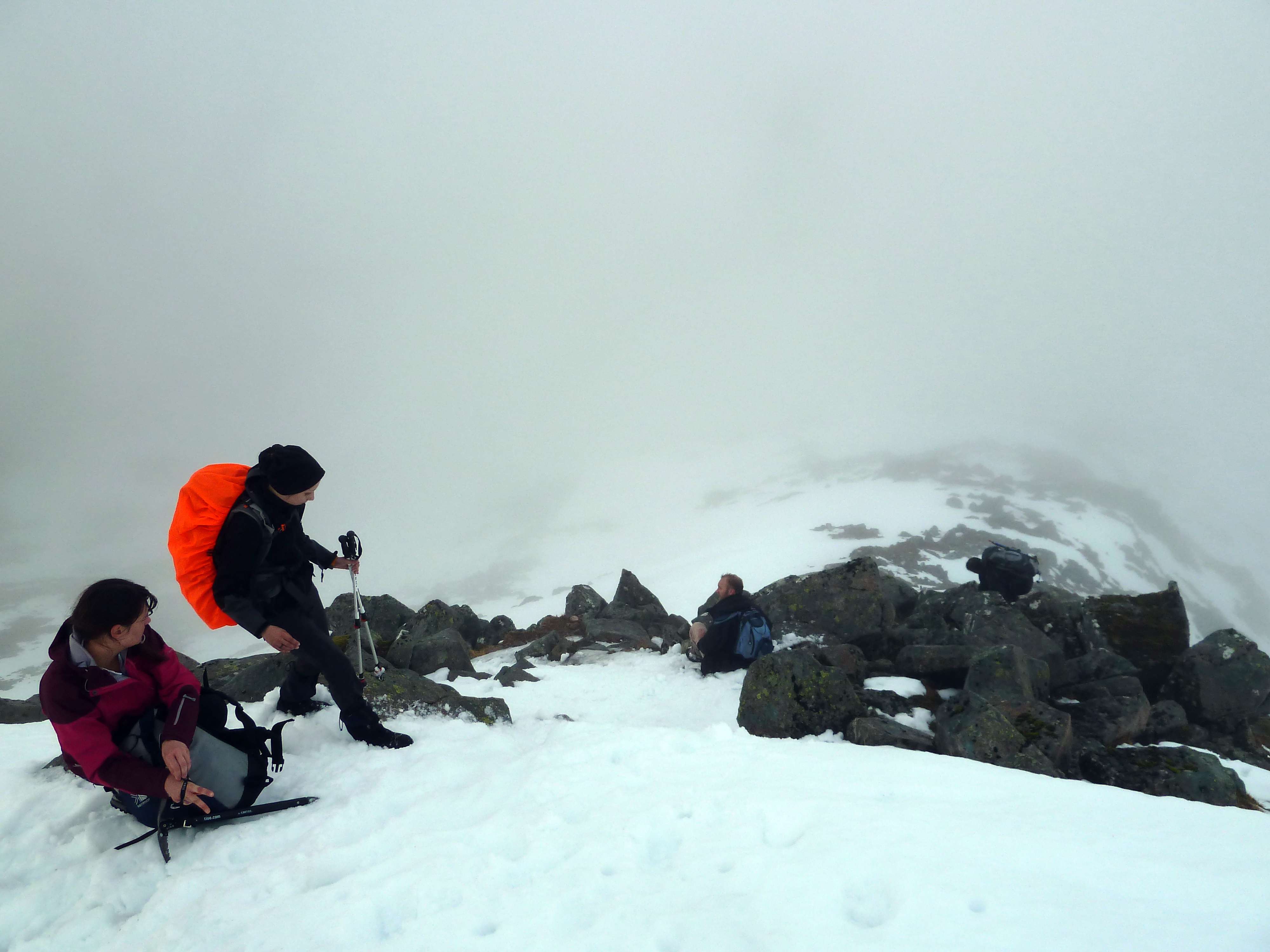 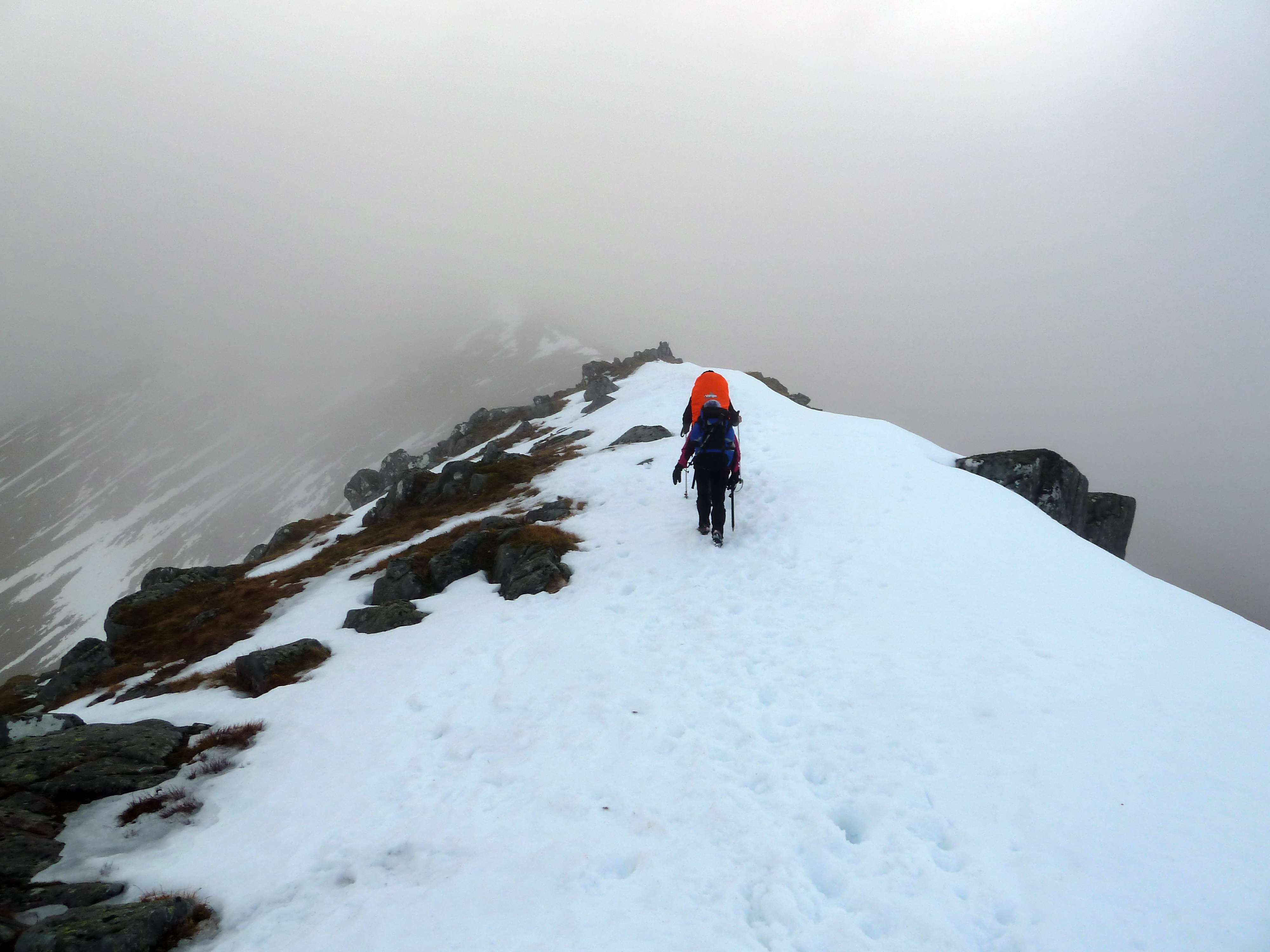 This was a nice little climb to the summit. Again we stopped for a quick fuel top up.

We now had just over 2k NE to the car park at the ski centre, all downhill

Some fun was had sliding down the Piste 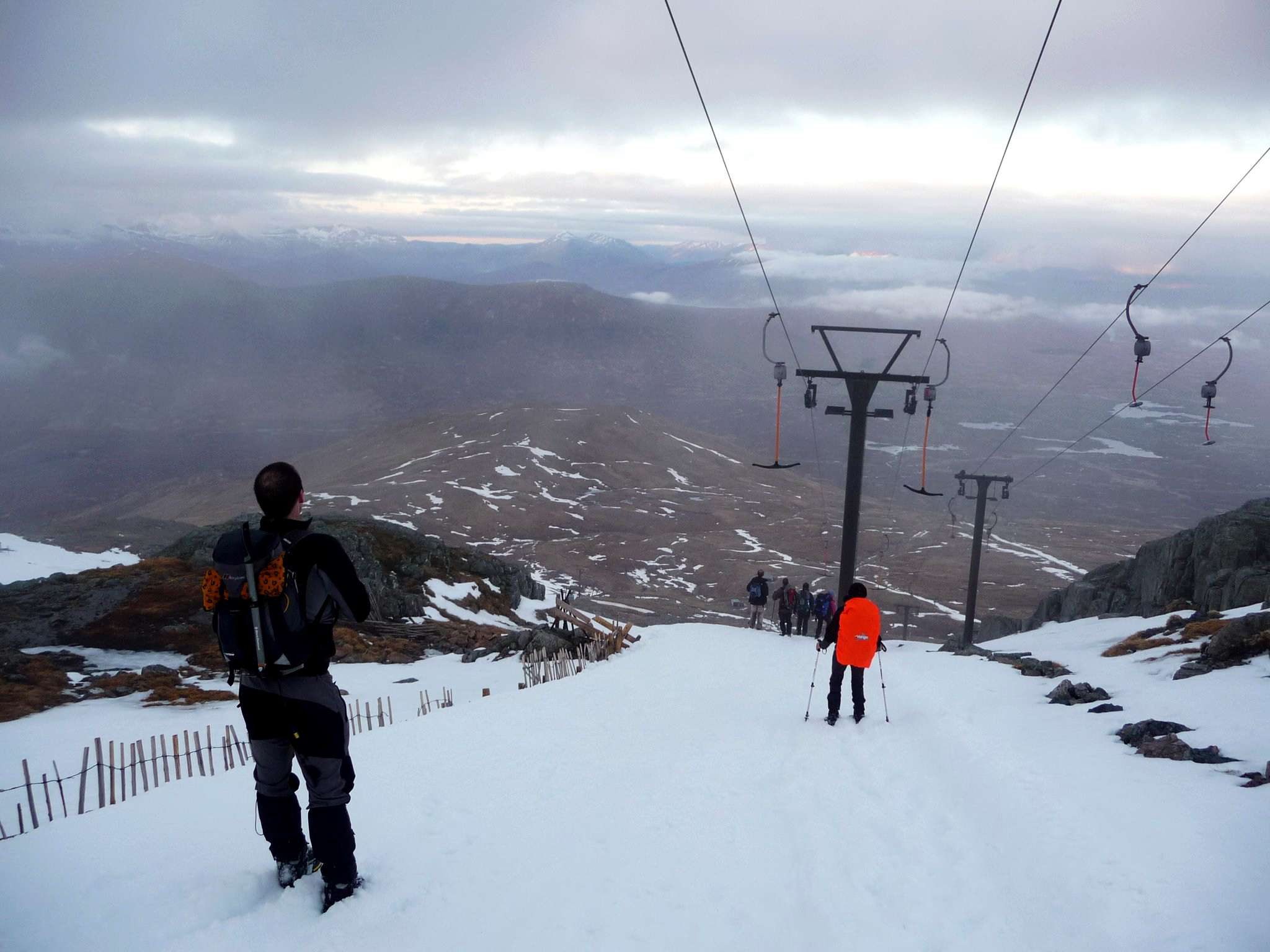 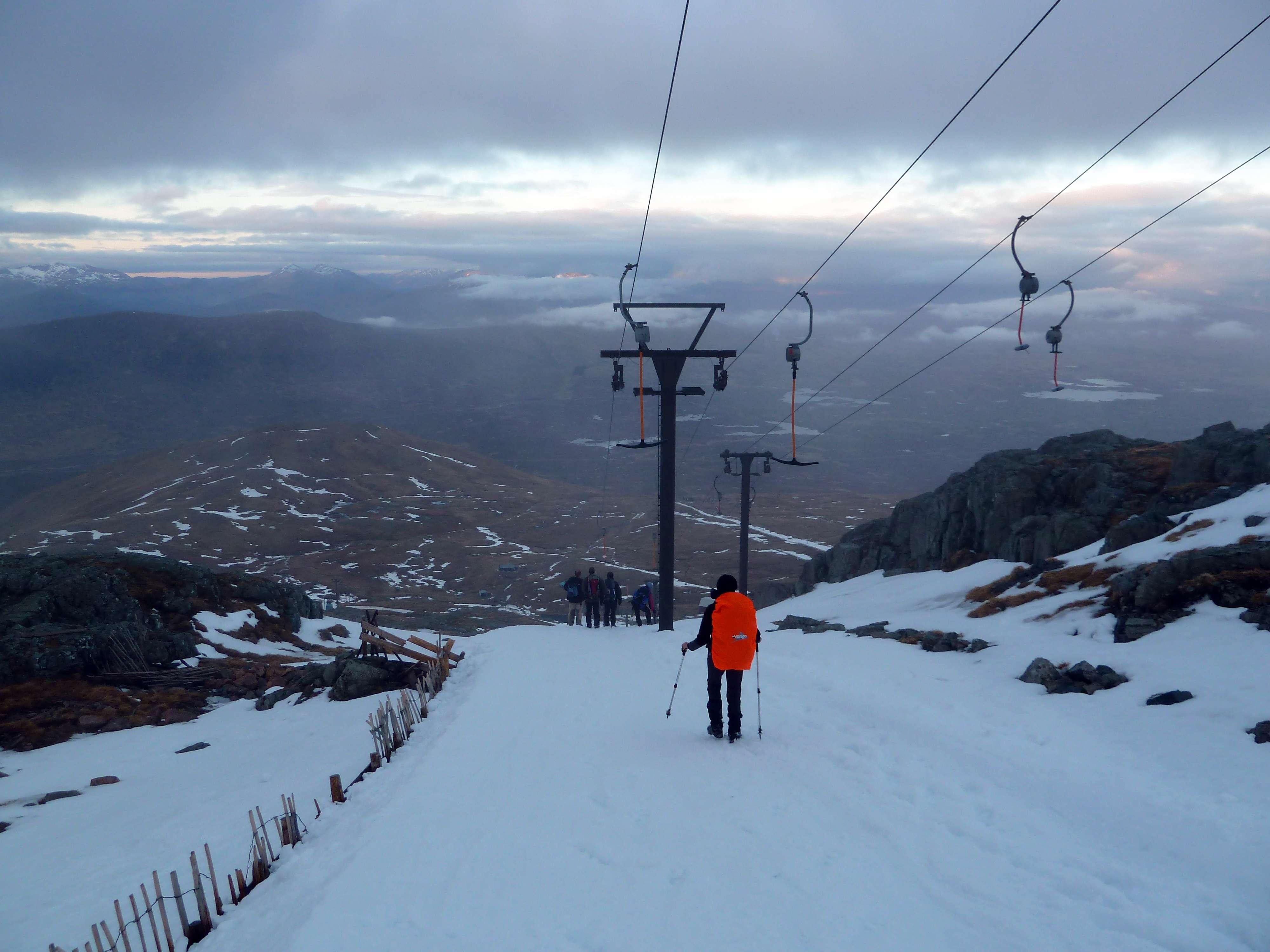 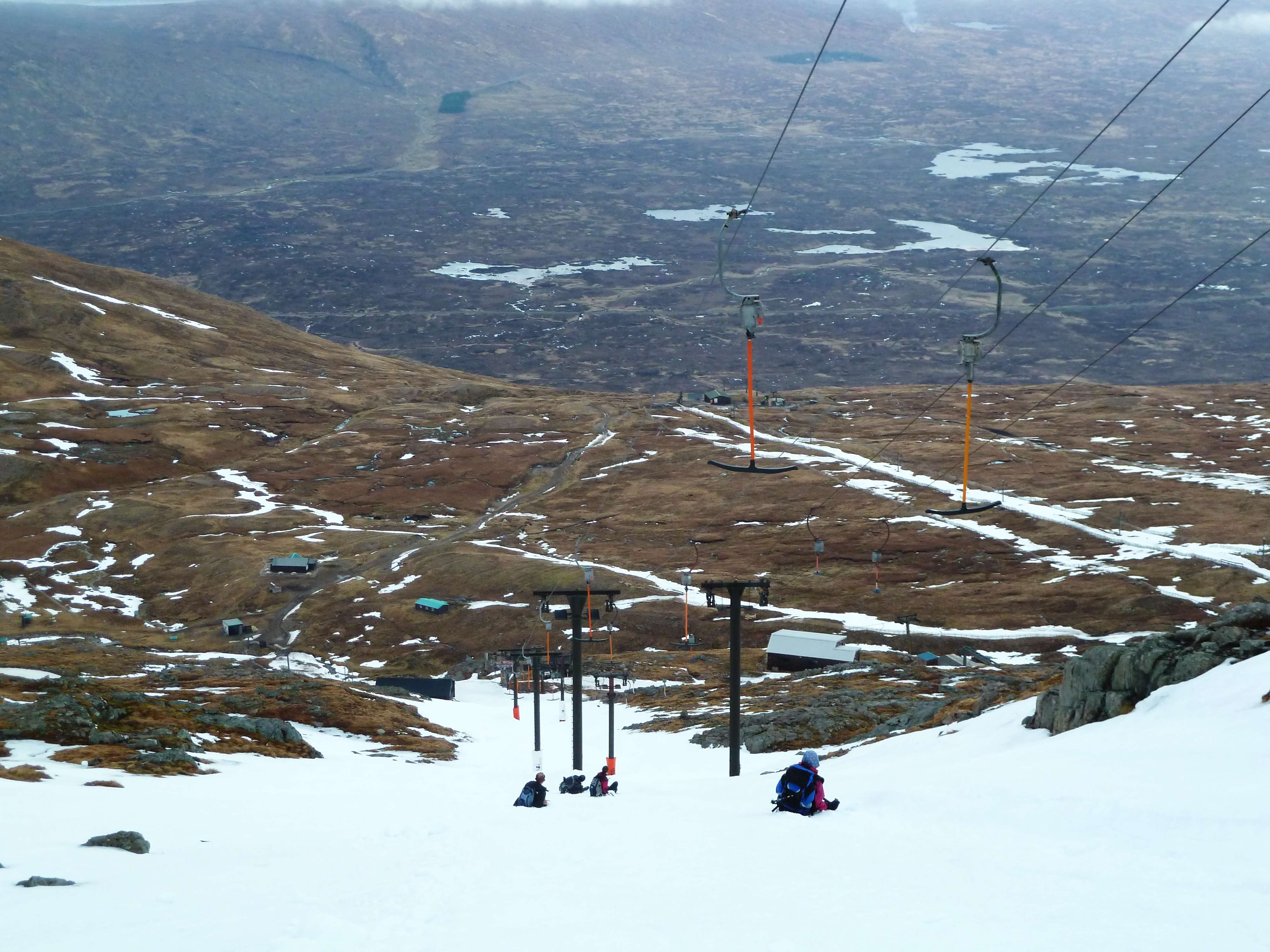 We had heard stories of an ice axe murderer at the bottom of the piste.... 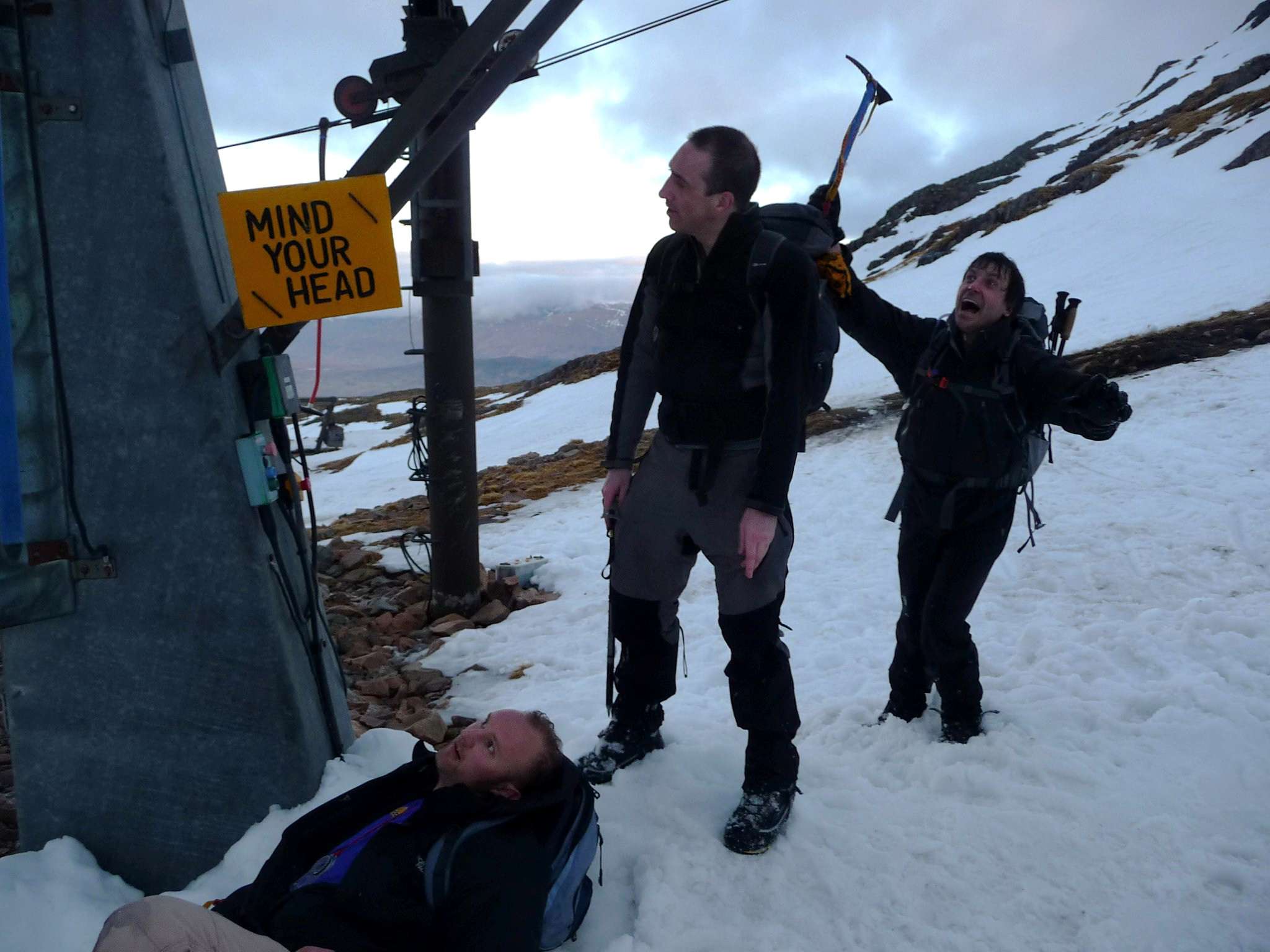 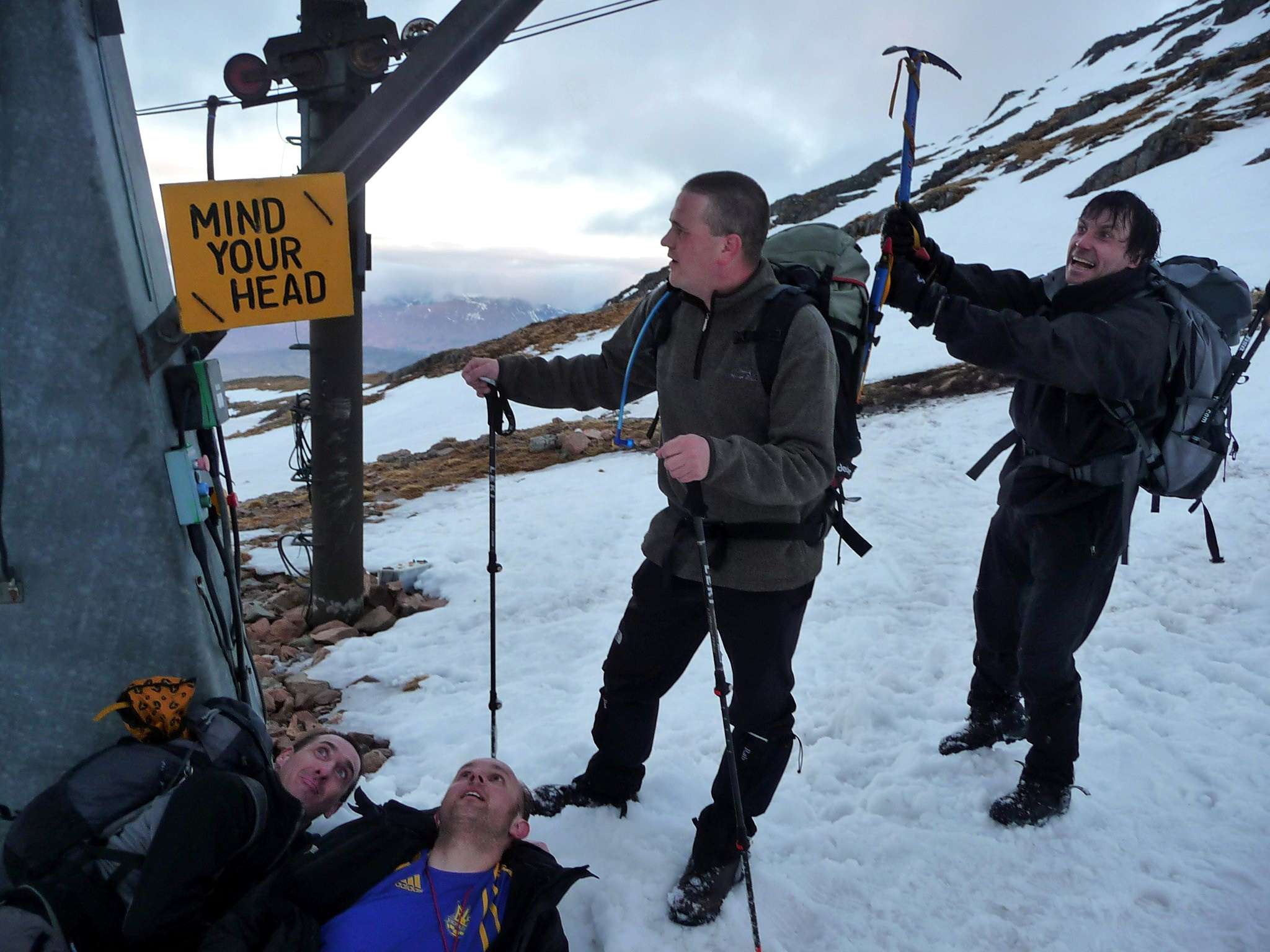 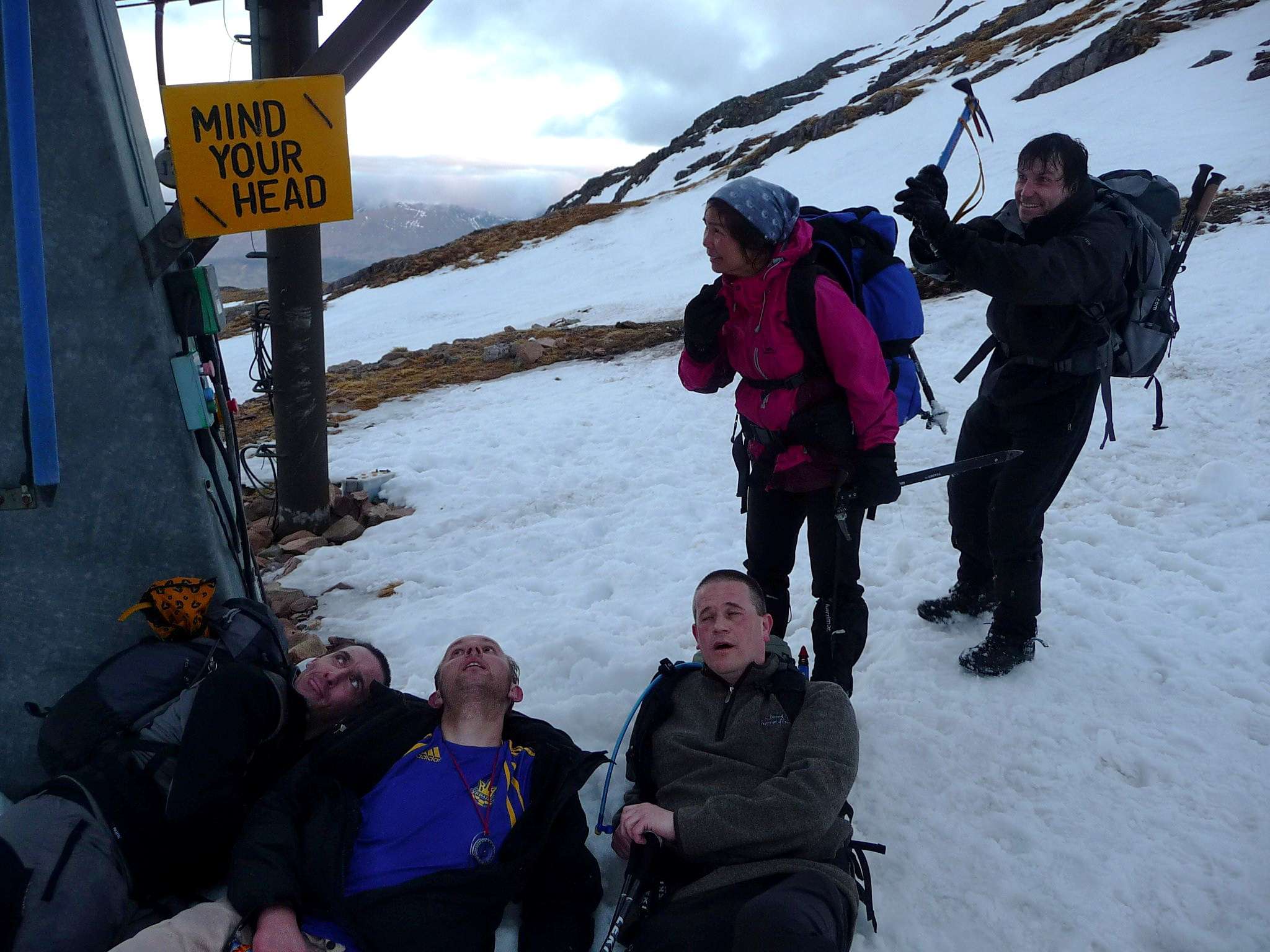 Although the weather was crap this was a hugely enjoyable day in good company, well done everyone

brilliant,that`s what you call great walk and picture`s,would love to do that

allister3 wrote:would love to do that

Join a club Allister and your dreams will come true

Helluva walk with some bloody steep ascents by the lok of it, and some great pics even though the weather wasn't quite what you expected - enjoyed this - thanks for posting

Nice walk - have always had plans to do a long traverse around these parts, but haven't done it yet. Also the weather doesn't look completely rubbish, even if it wasn't what you'd hoped for.

Good long day as well. I've been looking at a couple of long routes for the Cairngorms next weekend, but they may be a little overambitious...or maybe not!

malky_c wrote:Nice walk - have always had plans to do a long traverse around these parts, but haven't done it yet. Also the weather doesn't look completely rubbish, even if it wasn't what you'd hoped for.

Good long day as well. I've been looking at a couple of long routes for the Cairngorms next weekend, but they may be a little overambitious...or maybe not!

Weather was ok apart from lack of views, was nice to walk in. Just had a baselayer on most of the day.

Stunning pics, I cant wait to do something like this. Being new to this im working my way through the Arrochar Alps to gain experience before I move futher afield.

Looks like a lot of hard work!! Well done!!

Another fine report doots,you are fairly racking up your munro count

Nice trip dooterbang - at least you got some good weather during the day.

A wee query - everyone seems to cross the Aonach Eagach ridge from East to West - from what you've seen, could you tell me whether it would be any harder going West to East please ?

always fancied this traverse and its on my to do list, the fact it links two pubs, the inveroran and kingshouse hotels makes it even more attractive, the aonach eagach ridge can be walked in either direction but on an west to east traverse the decent down from the aonach eagach into the bealach with stob a choire odhair is steep.

Cracking report in all respects, a long day and a great time for the distance and ascent involved. The thought of that pint pulling you on?

The MWIS seem to have got their percentages a bit awry for a number of folk recently though!

Great photo's there although the weather does not look fantastic you have some moody shots.I love being on high ground in those conditions.

Did the same walk,but in reverse with Paisley Hillwalking club.Not in the same conditions underfoot though

rockhopper wrote:Nice trip dooterbang - at least you got some good weather during the day.

A wee query - everyone seems to cross the Aonach Eagach ridge from East to West - from what you've seen, could you tell me whether it would be any harder going West to East please ?

Think mgmt has answered this. Didn't look difficult, and we did see 2 guys going to do it.

is reversing it easier?