This stretch was done over three mornings. A lazy way perhaps, but it gave three sunrises, each of them special.

I headed off from the signpost at John o' Groats, it seemed the most fitting start point although the start/ end of the trail has it's own marker nearby. The sun was not yet up, the dawn was cool the sky touched with cloud.

A rough path makes east along the shore of the Pentland Firth. The well known tidal race off the Ness of Duncansby was giving a westward coaster little progress against it. Huge forces pass back and forth through the Firth every day. I paused by an old winch and thought of the skills, built up over generations, of the seafarers who had made a living on these waters.

Gradually the land makes it's way upwards to Duncansby Head. The Bay of Sannick is a lovely spot. There was not enough time to stop and see the Neruda poem carved into the rock but it is worthwhile to see - tide allowing! Nobody knows who carved it or why but it is certainly well executed.

I made my way past The Glupe - a natural blow-hole near the carpark at Duncansby Head. I could hear the sea far below, the square lighthouse was a welcome sight. Sadly some human 'deposits' littered the grass nearby, worse though was the amount of gloves and facemasks. At least the deposits decay!

Soon the famous Duncansby Stacks hove in to view. The sun rose up into the cloud sending crepuscular rays down on a distant freighter looming on the horizon. The 'Yeoman Bontrup', she sat high in the water anticipating her turn at passing through the Firth. The cliffs here are fine and high. Far below on a bouldery shore seals and their pups seemed safe from disturbance. Their sounds reached up to me, weird and other-worldly.

The terrain became wetter, the vegetation more heathery but I was heading south now. Noss Head lay distant and the day was fine.

Eventually I reached Wife Geo a place I'd never visited before and it was fascinating. A tall sea stack set within a geo (inlet) with a natural arch to boot. Anywhere else this would be postcard scenery but here it was another hidden gem. The linear bands of the rock were clearly apparent, millions of years of formation providing plentiful ledges for the seabirds of spring. Soon after I reached the wee pier at Skirza which was my endpoint for this day. Nothing had been at all strenuous and other than a few tourists at the Duncansby car park I hadn't met a soul.

From Skirza Harbour the trail takes a detour along quiet roads before taking the track down to the soft sands of Freswick Bay. It was a beautiful dawn, clear with a good forecast. Even the concrete tank traps from the Second World War can't spoil this one of my favourite Caithness bays.

I paused to await the sunrise. The wet sand was a mosaic of footprints from the feeding waders, off shore wintering goldeneye dived for their breakfast. There is something about a sunrise that immediately lifts the spirit. To stand on a beach, with not a human sound in the air, as a huge shimmering ball lifts from the water is to briefly thin the veil between our understanding of this world and something far greater. 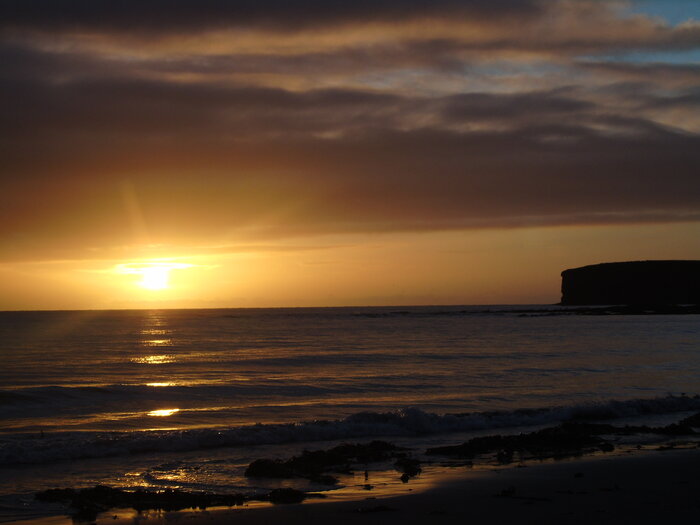 I made my way past Freswick Castle and paused to visit the Ness Broch. A stone arch stands by the remains of this iron age structure, a memorial to a gentleman antiquarian of the past.

I pressed on south. The problem with a walk like this is there is so much to see, progress is constantly under threat of hinder, however the views were open and distant Noss Head seemed to exact a draw upon me.

Bucholie Castle I'd visited once before. Its impressive ruins command an equally impressive site: a clifftop promintory connected to the 'mainland' by a narrow wee strip with near-sheer drops to either side. The last time I'd been here had been blowy and there had been no way of sensibly trying to cross over into the castle. Today though was still - and dry- I decided to have a go. My first attempt resulted in a quick backtrack, and I wondered why I was bothering, but more careful study of the options offered a second chance. Soon I was in and wandering the remains of this ancient Viking stronghold. Plenty of walls remain to show where rooms and halls would once have been. Higher up were some sockets most likely they once held beams for some upper floor. I imagined this place on a wild dark winter's night with its fireplaces roaring above the waves lashing the coast below. Having managed back across I looked back over to the castle and decided I wouldn't ever be crossing again. The finest view is without doubt from the mainland.

On further and I passed a long and gently descending flight of steps at Samuel's Geo. I passed the chance to go down them to the wee shore. I sometimes like to leave things as a reason to return.

Eventually I made it to Nybster. Here there is another attractive little harbour with a car park above. I phoned for my invaluable assistants to pick me up and drive me back to Skirza - another morning passed and nobody met, well not quite yet....

Upon getting to Skirza we decided to look for a geocache hidden there. Quite quickly a couple appeared and the bloke wanted to know what I was up to. He was polite but unfriendly and when I didn't take him on he became more unfriendly. It was a shame really to almost sour a nice morning but there you go! I never found the geocache!

The third morning required a short stretch of coast between Nybster and Keiss. It was colder, notably so, but once I got going all was fine. A good path leads from the carpark to the Nybster Broch. This is perhaps the most impressive of the brochs that must have once stood as a defensive chain along the coast. I passed a good half hour looking at the remains. Another monument to the antiquarian Sir Francis Tress-Barry stands nearby, unmissable in its Victorian style.

The trail sticks close to the coast though the cliffs are not quite so high as further north and the goes not quite so spectacular. Keiss Castle however is spectacular. This much-photographed ruin is fenced off but with it being perched on the very edge the fact that it is still there at all is impressive. I left it behind and stopped to speak to a friendly farmer out in his tractor before making my way on easy terrain past some WW2 pill boxes, another iron age broch (what history!) and reached the harbour at Keiss. Three easy mornings, I'd recommend it to anyone.