10 Years in the Munros Climbing the Munros wasn't the first thing that popped into my head, as the obvious initiation rite for reaching that auspicious milestone of 60. Other less demanding celebrations had been shelved, in the six months of personal sorrow that had generated more grief than I had known in my 58 years. Those experiences tainted my outlook and I started to approach 60 with a perspective that encompassed those twin imposters - illness and death – rather than a celebration of life past, twined with an optimistic springboard for the future. My sister summed it up succinctly. “The generation of our parents has gone, we're next.”

A legacy, born of just one of the sad events, allowed the soul mate and myself to purchase a static caravan in the Lake District and, during the spring and summer of 2014, my spirit was restored in the comfort of high hills, as I walked my way back to happiness, ranging across the fells near Ullswater. As it turns out, this particular spirit wasn't for giving up without a fight, or at least not without one hell of a lot more hill walking. Like nature in winter it had languished, underground but undefeated.

My 60th birthday was fast approaching, like an irritating itch forcing a reaction. Was it to be shunned, like an unwelcome gatecrasher at a party, or embraced as a new friend who shouted out that... if I wasn't exactly leaping into my 7th decade, I was at least striding into it - affirmatively. I needed a new plan, something forward looking and hopeful, catapulting me into older age. Then, on the 16th July, as I descended to that bit of broken dyke at Threshthwaite Mouth, where Patterdale reaches out to shake hands with Troutbeck, I had my epiphany. “This is it”, I thought. “This is what I love doing, I've not done many of the Scottish hills, I'll do the Munros - all staggering 282 of them. I'll do them before I'm 70, no problem.” The plan was hatched and broadcast long before I had thought to check out what “just a bit of scrambling” meant. It was something Carole had said. Carole is a friend who has completed the Munros, and it was a response to my query about if any rock climbing was involved. Instantly, on the click of a mouse, Google produced imposing images of awesome ridges and peaks, which were transported from screen to brain, to churning stomach, faster than a microprocessor on speed. Linguistic skills responded eloquently.

Disappointment loomed large and, in the next two minutes, when the somersaulting butterflies in my stomach were in free fall, my thought process went something like this:

That's impossible
I can't possibly do that
I can't do that...

Could I possibly do that?
Possibly I could do that...

I will do that.

My imagination was stirred and adventure beckoned, BUT... I wouldn't do them alone... Thus my phantom companion was born and he materialised three months later, after a search of rescue kennels to find my perfect dog. The six month old Border Collie Bob, was quickly renamed 'The Ben', to reflect his future conquests. What I really needed was a dog that didn't chase sheep. What I got was a dog that chased sheep; the Munro project was on hold. Eighteen months of training later, Ben was mainly obedient and could easily be walked through sheep: a) on a lead, with much cheese to distract him, or b) off lead with a ball to distract him. Unfortunately, neither of these are easy options on scarily exposed ridges, or frighteningly steep descents. This might be as good as it gets, thinks me. We'll start with the easier Munros. Time was doing that sand thing, slipping through my fingers at great speed. 11 months after my 60th birthday there still wasn't a Munro in any bag I possessed, but I needed to get at least one done before my 61st birthday - to make it a truly ten year project. To my rescue came Ben Chabhair, just north of Loch Lomond. Research had revealed this climb was off limits to dogs and, though offended, I reacted to the slight on my walking companion through the eyes of opportunity; they all had to be done sometime. Thus, on 10th September 2015 – with six days to spare - I nipped up my first Munro sans buddy; though nipping up and Munro are actually a contradiction in terms. Throughout the six hour jaunt it was touch and go with the ticking clock again. I got lost (not a good start) and, having a date with the return bus, had time limits on my aspirations. I made it to the top – only just – though that word 'just' underestimates the number of times I nearly gave up, to ensure I made it down in time for the last bus back to Glasgow. Eventually, covered in sweat, I took the most awful summit selfie ever seen, and hot-footed it down the Ben Glas Falls. Two ingredients for the future were born that day, I needed better navigation skills and I needed my own transport. BUT, my first Munro was in the bag.

The Only Just Functioning Van 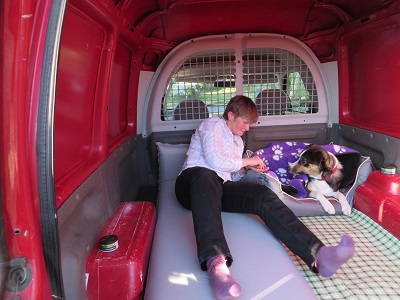 Public transport, with their imposed timetables, clearly didn't compliment my navigation skills. I not only needed transport for getting to and from walks, it would become my mode of accommodation too, given the shoe string budget I was working on., The search was on for a small, cheap, second-hand van. Nothing salubrious. but easy to fall into at the end of an exhausting walk, without the effort of pitching a tent, dismantling it the next morning, and then re-pitching it elsewhere, prior to the next days walk; after all, I wasn't in my 20s any more. Thus the Munormobile was found and 'kitted out', with everything crossed that this 2002, VW Caddy could cope with another 20,000 miles or so, before giving up the ghost. It had certainly seen life - judging from the bumps and crowbar type entry that was evident at the back door; it had character. If I couldn't afford a decent van, sure to go the distance, I might as well go for character. The project was gaining a bit of momentum and something about the scale of the challenge must have unhinged the rational part of my brain. Fundraising was a secondary thought but, once it came to consciousness it seemed obvious. If I was going to put myself through it I might as well try and do some good by it. Well trained dogs seemed a bit of a novelty at that time, with Ben exhibiting all the behaviour of an owner who didn't know what they were doing. Well-behaved dogs in the service of people; that's what we would do it for, I thought. I couldn't possibly say what possessed me to think I'll have one of each - when I found out that it costs £20,000 to train and match a canine partnership (enabling a disabled person to live an independent life), and £12,000 (much of it in kind), to train and equip a search and rescue dog. After all, I only know about ten people I can tap for... possibly a fiver. But, much like my announcement of “I'm gong to do the Munros”, once it was out there I was committed to it. There was no going back. Here we have it then. An ageing, creaking septuagenarian, with minimal navigation skills,
who finds it easier to stumble over rocks than to climb up them, has decided that she, her
dog, and their dilapidated van, are going to 'bag' the Munros. The dog chases sheep, nips
ankles and would much rather run after a ball in the park than flog up a mountain, let alone
282 of them. The van is on its last knockings – literally. It will probably struggle to get through another year, let alone 8½ of them. In addition, the fundraising target was born in a marriage of crass stupidity and blind optimism. How will we do?

The Writing on the Wall Obviously the whole saga needs to be recorded so, at the end of it all, come success come failure, the best selling book. Watch this space.

After all, it's not all about the destination, it's the beauty of the ride.