This stretch of the John o' Groats Trail gives real variety and I tackled it over three mornings at a canny pace. Fortunately I live nearby so there was no risk of breaking the rules in order to enjoy these outings.

From Keiss Harbour I followed the road up to the bottom of the village before picking up the wee path by some houses that leads to the shore. It was a still, though foggy, morning.

There are old second world war tank defences along the grassy path. Put in when threat of invasion of the flat open Sinclair's Bay was real they now seemed mute evidence of the transience of human problems.

Two options presented themselves on this first morning: the beach or the dunes. For the most part I choose the former.

Slowly the fog was thinning and with the tide out the fresh wet sands invited the footsteps they still lacked so early in the day. I made good progress. Black-throated divers were a welcome sight offshore, terns worked the nearby surf.

The burn at Wester pours out on to the sands and in spate could certainly require a detour well inland. For me, however, I was fortunate, and able to wade barefoot across quite easily. Soon I was passing the old boiler of the Jean Stephen: an Aberdeen trawler wrecked on this shore in 1958.

Towards Ackergill I picked up the path above the beach, below me I noticed some dunlin. At this point the sands give way to a rockier stretch of coast and the fine Ackergill Tower dominates the view. On short grass the path passes directly below the keep, I paused and thought of the sad story of Helen of Braemore. 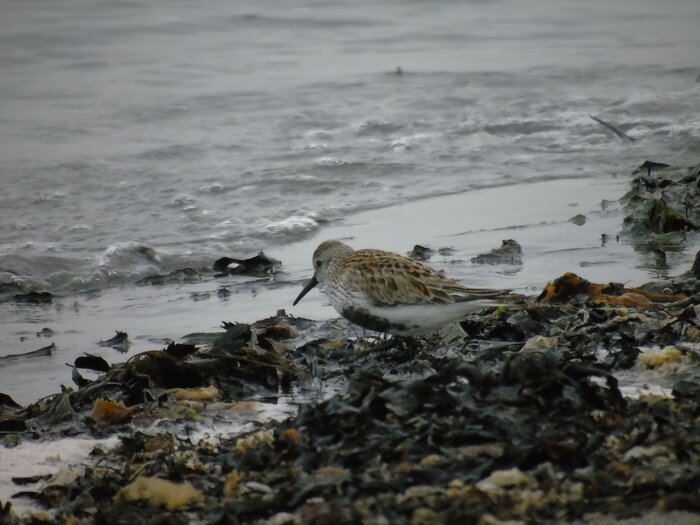 A decaying whale-bone arch faces out to sea as the trail moves slightly inland. Some cows were briefly encountered (without problem) and passing the playpark I arrived at the wee hamlet of Ackergill and its picturesque jetty.

I pressed onwards over the short grass and came upon another reminder of past conflict. A pillbox, remarkably preserved, was worth a short break to explore.

The low lying shoreline of Sinclair's Bay transitions to more typical Caithness coast as Noss Head is approached. Higher cliffs and geos add interest with the elevation affording distant views. The fog by now had evaporated and I was able to look back to Keiss where I had started. At this time of year it seems that the trail can become quite overgrown in parts. With the long grass not yet dry I arrived at Sinclair Girnigoe castle with trouser legs that were soaked through. That said with this the end point for the day it certainly hadn't dampened my enthusiasm.

Noss Head can be either a terribly bleak place or a glorious one depending on the weather. Both have their individual beauty so that neither surpasses the other.

As I arrived at Sinclair Girnigoe the sun had just cleared the horizon and it was to be a morning of blue skies with only the gentlest of breeze. There are some fine wee geos and stacks to visit and photograph along this part of the trail. The Noss Head lighthouse is still in use though some of the buildings are now privately owned. At times there are views north and south along the coast, even a wee loch makes an unexpected feature.

As I wandered on skylark song burst upon the heavens and wildflowers splurged colour on the land. The sun was dazzling on the water, shags - skarfs to the locals - were drying their wings on the rocks below. Staxigoe is another photogenic place. The shingle shore, harbour and sea stack (from which it takes its name) are a picnic enthusiasts dream. For me it was the finish line for an easy Sunday morning donder.

A fresher day saw me finish this section of the John o' Groats Trail: an easy walk from Staxigoe along the road before picking up the popular North Head path at Broadhaven that leads into the town of Wick. There were only a very few people around at this time of day and in no time I passed the sewage treatment works and Wick Bay hove into view. This can be a wild place during a storm as the waves drive in from the open North Sea and crash over the harbour walls. Today was much more benign however and entirely suited to a short stroll and the end of this part of the JoG Trail.