Originally we intended to climb Carn nam Bad on Saturday, but forecast was too cold and windy to our taste so we ended up with our Boris walk up Torr Breac, a local 360m hill. We had visited it many times during last spring lockdown, the top is a great viewpoint and we found some interesting ancient artifacts nearby, in the shape of Iron Age forts (details of the extended version of Torr Breac route HERE). Now in the depths of winter, there was no point returning to the forts, but the hill itself provided us with some good exercise in deep snow. Little did we know that in the next few days temperatures would suddenly jump to +10*c and all the white stuff will disappear from lower ground. So this was our last proper winter walk this winter, well, unless we have another weather anomaly and experience deep snowfall in March (not impossible, remember the beast from the east?).

There are several variations of paths/tracks one can take to reach Torr Breac from Beauly, we always try to do "some kind of circular" as Kevin says:

Track_BEAULY HILL 16 KM.gpx Open full screen  NB: Walkhighlands is not responsible for the accuracy of gpx files in users posts
Using the local rads, we climbed up to the forest above Ruilick. This is a popular walking spot for locals and dog walkers, so a panther of the leash didn't draw anybody's attention The day was cold and cloudy but the cloud was high so we could still enjoy the views:

We followed the track past Dun Fhamhair to the edge of the forest - we were now only 50m below the summit: The final climb was pathless and through deep snow so it took some time, but we were already used to proper winter walking by now. It felt a bit odd to trudge in deep snow without walking poles though - in such conditions a third point of support is really helpful!
It's not much of a climb and soon we were on the summit of Torr Breac, no cairn here but the highest point is obvious. There are extensive views in all directions, especially over Loch nam Bonnach to Ben Wyvis and Little Wyvis: To the west, Beinn a'Bha'ach Ard (in the far distance) and Cnoc an Teine (in the foreground): 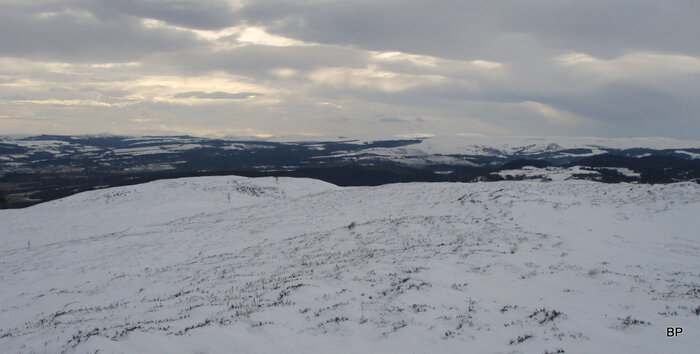 It was cold indeed and thinking it was just a Boris walk, I didn't take my warm ski gloves, so by now I could hardly feel my fingers! Kevin mentioned Cnoc an Teine, the second TUMP right across the track to the west, but I was freezing so said no way. To make most of our walk today, we dropped NW from the summit to pick a track circling the hill. The descent proved slow, especially over snowdrifts: On the track around Torr Breac: View south-west from the track: The area around Torr Breac is popular with deer and today, as so many times before, we met the monarch of the glen. He was guarding the hill slope above us and looked like he didn't have a care in the world:

Can you spot him in a wider pano? I guess the deer are used to people here, with the hills being so close to the villages in the glen below. Kevin was disappointed he didn't take his better camera today. As we continued around the bottom of the hill, we spotted more deer, about twenty hinds and juvenile males. They were so busy digging grass from under snow that they didn't even notice us. We stopped for a few minutes, just to admire the winter wonderland... On the way back we took a different route via the Mushroom Path to Ruisaurie, it is usually boggy but today the bogs were frozen solid. My hands did eventually come back to life when we returned to the village. What a winter we have had so far!

Sadly this was the last of my winter meowing. The white stuff is now melting at the speed of light...
View to Beauly Firth from the track near Ruisaurie yesterday (17 Feb):