Having lived in Beauly for nearly two decades, strangely, we never wandered into Gleann Meinich, despite it having a good track for over 6km. Somehow we always found what we thought were more interesting areas to investigate. Only last year when we repeated Meall na Faochaig, sitting on the summit, we noticed this glen and thought it would be worth exploring.

Today, all I can say is WOW. Not only we loved the experience but also invented two new routes for the future explorations. Creag Ghlas, an outlying top of Sgurr a'Mhuilinn, looks an absolute cracker (we're not tackling it via the rock climbing route, we are not that crazy!) also, Gleann Meinich provides an interesting alternative approach to the above mentioned Graham, Meall na Faochaig. Let's say, today's walk was just a bit of sniffing around, checking out the area before the bigger, braver days of spring and summer.

There is a good layby for several cars at the entrance to the glen (next to Glenmeanich farm) so we could just park up and go!

Track_GLEANN MEINICH 15KM.gpx Open full screen  NB: Walkhighlands is not responsible for the accuracy of gpx files in users posts
The day was windy with passing showers so not good conditions for going too high, but Gleann Meinich provided us with enough fun for one short wander!
Meall na Faochaig from the start of the walk: Despite high winds, it was warm and sunny at the moment so we used two cameras to photograph the glen in good morning light. Just from the beginning, Creag Ghlas is a dominant feature (seen behind me in the photo below): River Meinich was in huuuge spate today, but we both agreed that in the summer it would be possible to cross it (saw several good spots en route) and tackle Meall na Faochaig from this side. There are gaps in the forest and one could sneak up the Graham following the slopes just north of the crags called Creag na Saile. But that's an idea for dry days. It seems that deer in this glen ale well cared for, we counted three feeders full of fresh hay and salt for licking, too. No wonder they stick around rather than venturing higher up the slopes: Speaking of venturing higher up, I was very excited to see Creag Ghlas from closer proximity. This is something I'd love to explore! The upper part of the cliffs of Creag Ghlas is called Salamander and is well known in the rock climbing circles, graded a HVS 5b climb. We're going nowhere near this vertical schist wall, but I'd love to reach the summit of Creag Ghlas and look down from the top Back to our wander in the glen, the track crosses several pine plantations: Old ruins in the forest: I was worried we might struggle to cross Allt a 'Chair, but discovered soon that there was a bridge over the stream: 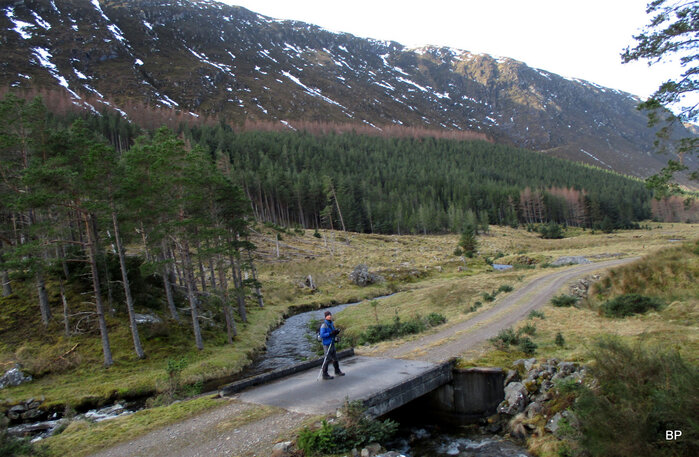 I thought, if we walked along Allt a 'Chair, we could climb above the forest and follow the SE shoulder of Creag Ghlas. It looks steep-ish and overgrown by heather, but this line avoids all the crags and would take us to the top. We just need a nice day with low winds for it!
Panther investigating: The crags of Creag Ghlas in their full glory: Having spent enough time studying the Salamander cliffs from below, we continued up the glen. At the moment, the top of the valley was "somewhere over the rainbow": We were surprised, how quickly the snow was malting from even the highest tops of Strathconon: 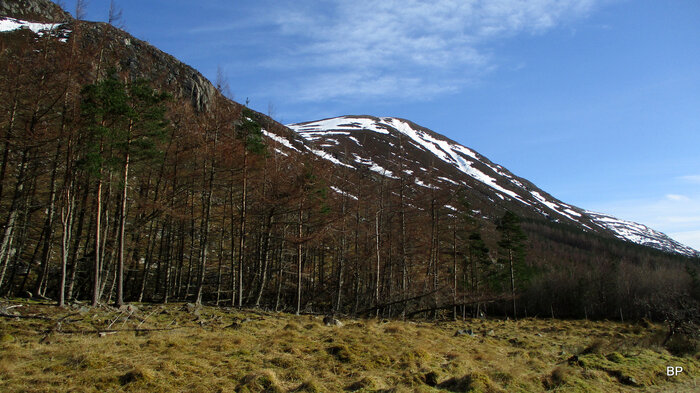 The river was still frozen in several spots, but it felt like the last remnants of the dying winter... Have I mentioned rivers in spate?

Allt a'Droighinn proved quite a headache: 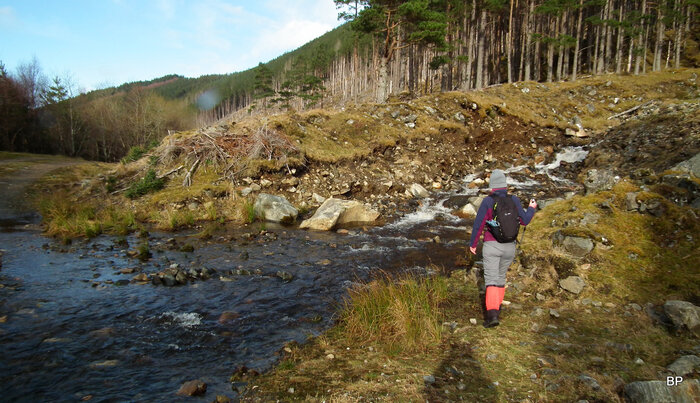 We managed to cross it somehow and continued up the glen, admiring the steep slopes on both sides. Climbing out of Gleann Meinich at this point would be tricky to say the least!
Allt na h-Eilig waterfalls: Another stream, this one with no name on 25k map, coming down the northern side of the valley: One more river crossing, this time easy to tackle: After the last crossing, the track deteriorated a bit, became more boggy, but it was still following River Meinich. We kept walking, decided to go as far as the track would take us: 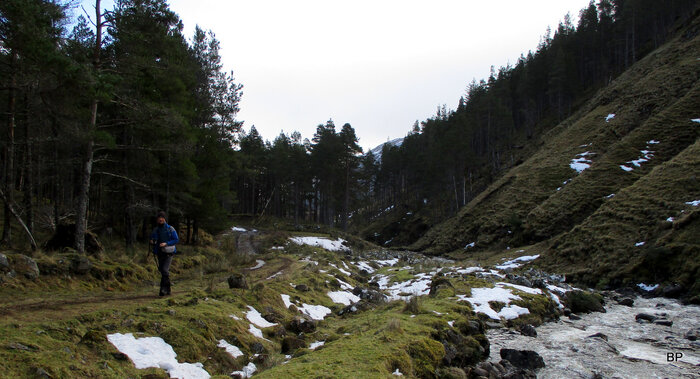 Even up here, the river looked uncrossable and we had no intention of trying! We found a good sheltered spot for our tea and cookies break. A 15 min shower came and went, leaving behind blue sky and sunshine. Walking up the glen was now pure pleasure! The upper Gleann Meinich is stunning. We only reached as far as the end of the obvious track, but one could easily walk out much further onto the moorland, even climb the western tops of Strathconon Corbetts from here (we had visited them one time when repeating the Corbetts via the traditional route, but we could re-do the tops from this side, just for fun!).
The possible route up Sgurr a'Ghlas Leathaid to the left, above the forest line:

Looking into Gleann Meinich from the end of the track, Creag Ghlas dominates the view: If it wasn't so windy... We never planned going higher than the top of the glen today and didn't even have proper hillwalking equipment, so despite weather improving, we had to turn back here, but I'm desperate to return to this glen and use it as an approach to Meall na Faochaig. We had been to Cnap na Feola (the 579m N top of the Graham) before and it looks possible to reach this top from the upper end of Gleann Meinich. Not to mention climbing Creag Ghlas!

I simply can't wait for another visit to this beautiful corner of Strathconon for more ambitious hillwalking, forest-trashing and heather-bashing. Spring is in the air and I feel so mountain-deprived... Yes, we did visit several easy Grahams in the depths of winter, but my brain needs heights to recharge. As if I was suffering from low altitude sickness

At least my knee seems better, the injury is still not 100% healed but I rarely feel it at all. So glad that spring arrived early this year, hopefully the sunny weather stays with us for longer