A damp and colourful autumn around a flooded island

A damp and colourful autumn around a flooded island


For some reason neither of us could remember, Moira and I had never done the WH circuit that takes in Dunglass Island. Talk of much mud may have been it, but there comes a time when even a potential mudbath isn't enough to deter from pastures new and we wanted something local with car sharing not being the thing to do.

So off we set with that excitement that comes with exploring somewhere new and parked by the Maryburgh war memorial where there was room for both cars. We followed the main street towards Conon Bridge passing the shop and into Seaforth Place, as per instructions, and on up the hill passing the attractive Free Church building but omitting to locate a few steps on the left into Muirdean Road. This meant we went higher up the hill than we should have, and were on what would be our return route.

Twigging something wasn't right we happened upon a spaced out group of local women standing talking, as one did in 2020. Moira knew one of them so asked which way we should go for the path to Dunglass Island. Interestingly they didn't really know but gave a few suggestions which left us still uncertain. So on we went through an area of sedate bungalows vaguely going downhill which we felt should lead us to the river. I can't now remember exactly how, but we did end up with the railway on our left and a path ahead going into a field, which seemed like a good sign.

Start of path by railway line We followed this path by the edge of the field and almost immediately I noticed a Horse Chestnut tree over to our right. My 8 year old grandson had been collecting conkers so I did a soggy detour to the base of the tree and hit the jackpot, filling my pockets with conker treasure. The irony of this was when I triumphantly offered them to him later he said he didn't need them as he already had too many! The field was squelchy and so was the path along the edge but after 1km of dodging round puddles we reached the bridge which gave us a temporarily dry base for viewing the River Conon, which was impressively full. From bridge to Dunglass Island Once over the bridge we had to decide whether to go left or right, WH saying left. But two women we met said the path round the island was flooded and we'd be better going right. So that's what we did. A number of cars were parked just over the bridge and a group of blokes standing talking, like a fishermen's convention, although I don't know why I say that as there was no fishing tackle in sight. Maybe the way they were dressed.

We walked as far as the fishing hut by the weir at the south end of the island. Never having been there before I didn't know if there was an unusual amount of water flowing over the weir, but the river was running full and fast. Like most labs Keira is a strong swimmer and loves retrieving sticks. But I didn't throw any sticks into the Conon and she must have sensed the danger as she didn't make any attempt to go in.

On a regular dog walk along the River Nairn We retraced our steps to the bridge, knowing we hadn't done the island justice and would have to make a return visit sometime. The path along the edge of the field had been so wet we tweaked the route by following the farm track up from the river to join the minor road at the top that leads to Balnain Farm. We turned left along the road. It wasn't the way the WH route told us to go but the views west were lovely in the autumn colours and it certainly helped to keep our feet dry! 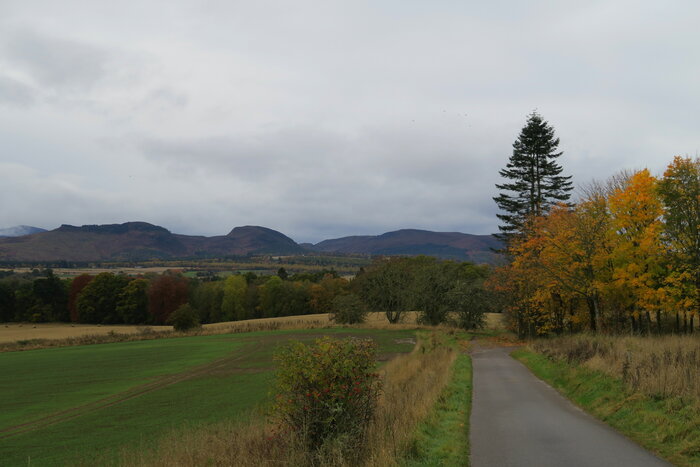 We rejoined the WH route and walked through a gorgeous avenue of trees. When we reached the cottage we turned right through another avenue of trees with Broad Wood on our right. We followed the WH instructions which took us back to our cars without any repeat of our earlier wanderings. Must concentrate more in urban areas at the start of walks!