Corbetts included on this walk: Càrn a' Choire Ghairbh


A wonderful weekend of high pressure weather has arrived and for us it meant only one thing: the higher hills! I was a bit reluctant to go up the Affric Munros, simply because they are tough, long walks and I still wasn't sure if my knee could cope with so much pressure. But a nice Corbett, why not?

We had already done all Corbetts in this area, some more than once, but at the moment we can hardly expect a new summit, unless it's a God-forsaken Sub'2000er in the middle of nowhere

We picked Carn a'Choire Ghairbh simply because during our previous visit in 2014 weather was foul and we saw very little from the ridge, so now it was time to revisit this mountain in more friendly conditions. We were not sure what kind of temperature to expect on 800m, so we both wore our winter trousers which turned out to be a mistake. The day was sunny with low winds and by the time we reached the summit we were roasting. Some weather for February!

There are several routes up/down Carn a'Choire Ghairbh and its neighbour Aonach Shasuinn. They can be climbed together in a big round on a long summer day, but we always considered these hills as winter/spring walks and did them separately. The approach we used for Carn a'Choire Ghairbh makes the best use of local tracks and paths and also avoids all steep ascents/descents. The upper Corrie Allt Garbh can be a boggy nightmare, but in general, this is probably the least painful route for someone nursing an old knee injury

Track_CARN A CHOIRE GHAIRBH 23KM.gpx Open full screen  NB: Walkhighlands is not responsible for the accuracy of gpx files in users posts

We arrived at Glen Affric car park early in the morning and surprisingly, we were the first walkers to show up. Birds were singing like crazy and it felt more like April than February!
River Affric not in big spate, but the morning was cloudy and we wondered if we'd get a cloud-free summit... Sgurr na Lapaich across Loch Affric looked inviting. We had only climbed it once (it is not a Munro sadly though in my opinion it should be!) and a good chance we will revisit this summer! The south side of Glen Affric has, in the recent years, been scarred badly by hydro works, but I must say that the area has been tidied up nicely after finishing the construction. Today, the glen looks almost as wild as it did before the big dig.
Looking to our target hill across Allt Garbh: The path along Allt Garbh is a public right of way and we had been up/down it several times. Today, it seemed more boggy than usually but maybe it is just the wet time of year, all the melting snow turning the path into splodgathon. At least views are nice and the river has some lovely waterfalls: We really enjoyed walking amongst the old Caledonian pines: As we gained height, we were treated to the great panorama of the northern Affric hills. Sgurr na Lapaich and An Tudair are the most prominent peaks, the main Munro summit, Mam Sodhail, hidden behind them:

At the height of 400m the wet path joins a much better track from Cougie: 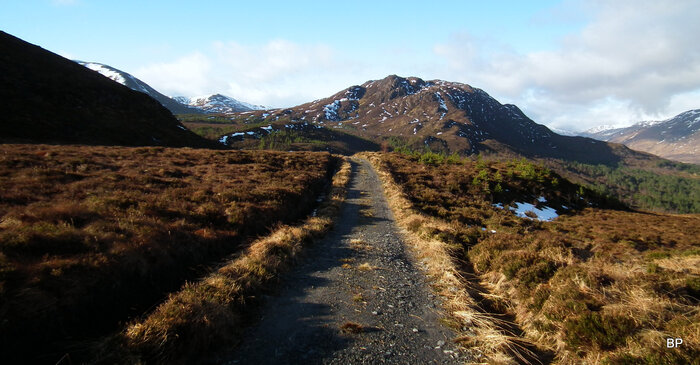 The lower Glen of Allt Garbh has recently been bulldozed up and down during the construction of a small hydro dam and we dreaded to see the result of this devastation, but we were nicely surprised. Just as down by the loch, up here, the pipes have been buried and the glen mostly restored to its wild looks. I say "mostly" because the track is now much wider but at least the nature was given a chance here... Reluctant on the wobbly bridge: The track crosses the river just below the new hydro dam and continues up the glen for another kilometer or so: We walked up to the highest point of the track and from here, we aimed NW up the grassy ridge: The slopes steepened for a short time but it only took about 200m of ascent to reach the eastern end of the ridge. Whatever cloud lingered in the morning, has now burnt off and we were basking in sunshine. It felt fantastic to be out on the higher mountains again. We're so lucky to live in the Highlands! We aimed for a large rock, shaped like a canine head, I call this feature "The Howling Wolf of Affric". Just next to the Wolf, we spotted a convenient place for a break and a quick fix of tea and cookies: The Wolf seen from the west: We still had about 150m of ascent left to the summit, but it was all along an easy, gentle ridge, so no wonder I was ready for meowing! Creag Dhubh - our target for the near future. As a Sub'2000 Marylin it has a few entries on WH, but all reports describe the approach from Cougie, whereas we'd like to explore the western route from Loch Affric:

The lower top, Carn Glas Iochdarach is marked with a small cairn. Still over 2km to reach the summit proper, but the views were already stunning: Posing on the lower top with the eastern panorama behind me, including Loch Beinn a'Mheadhoin: We descended to a wide bealach, from here it was another 160m of ascent to the summit. A few peat hags here and there, but mostly still filled with snow: Aonach Shassuin, the other Affric Corbett. We have a sneaky little idea of a route for this one, just need another good, sunny day It didn't take long to climb the gentle final slope to the summit of Carn a'Choire Ghairbh. Close to the top we found more snow patches but honestly, it was possible to avoid them all and walk to the very top without touching any snow!
My rucksack felt very heavy since I was carrying crampons and extra warm layers of clothing, which turned out completely unnecessary. I was boiling in my winter trousers, so my attempt at striking an unusual pose looks rather pathetic

Zoom to Mullach Fraoch-choire. The highest tops have so far kept their winter coats:

We found the summit cairn easily and couldn't believe how lucky we were today with such a superb weather. We felt a cool breeze, but the winds were much lower than forecast. Some of the highest tops of Affric didn't shake off the cloud but the views were still amazing!
Kevin on the summit:

Lucy and Aonach Shassuin on the horizon. She ticked off her 119th Corbett today: The main ridge of Affric Munros with cloud covering the highest tops. We were glad we didn't pick a hill over 900m for today's trip - we'd hardly see a thing!

We spent nearly half an hour on the summit. It was such a nice spot to be and so hard to believe that one of the harshest, snowiest winters in history has so quickly turned into an amazing early spring!
Exploring snow patches around the summit of Carn a' Choire Ghairbh: 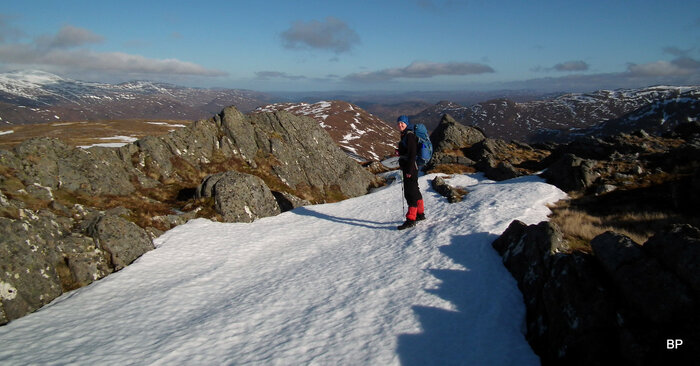 It is possible to descend due north to the track on the southern side of Loch Affric, but this option is quite steep and I wasn't sure how my recently recovered knee would handle this. It has been behaving so far but I didn't want to overdo it. So our descent route took us down to the upper Corrie Allt Garbh.
Our descent line:

This glen is usually a splogathon so we didn't expect a dry path this time, but on a sunny day even a boggy descent felt fantastic! About half way down the glen, we encountered a web of deadly peat hags. Note the deceased deer to the right side of this photo: We managed to find our way through the labyrinth of hags and eventually, we picked the end of the ATV track leading down to the hydro dam. Now it was much easier walking on tracks/paths. By the time we reached the viewpoint Above Allt Garbh, we had to strip down to single layers. It was shockingly warm for late February!
The classic Affric panorama:

The summit of Mam Sodhail finally out of clag: It took us much longer than we expected to finish this walk (over 8 hours) but we didn't really push it. Such a fantastic day and Carn a'Choire Ghairbh has given us all we needed to feel refreshed and recharged. Hopefully weather stays nice enough for us to continue our local adventures. There are so many combinations of routes in Glen Affric area that we could just walk here all year and always fund something new to explore!

Oh that fair cheered me up!

Wonderful to read of you getting out and about in those beautiful hills - you are so lucky living in Highland! My younger son and his wife live in that area too and have been able to get some lovely hills in - we ,of course, are limited to walks in local (but lovely) Pollok Country Park. Smashing day you had for it -we've noticed so much birdsong recently, does the heart good. I hope your knee is well on its way to recovery, it sounds like it is