With second lockdown firmly upon us and running out of local walks we had not done too many times already we settled on this canal and river circuit we had enjoyed doing the first time. Only this time I was keen we did it the way WH suggested, along the Kinmylies side of the canal rather than the Dalneigh side, which is what we usually do to avoid going round the back of the boatyard.

We parked by the Leisure Centre and made our way from there to the Tomnahurich canal bridge which we crossed to the canal's west bank. So for a short distance we were on the Great Glen Way as we would be at the end of the circuit as well. 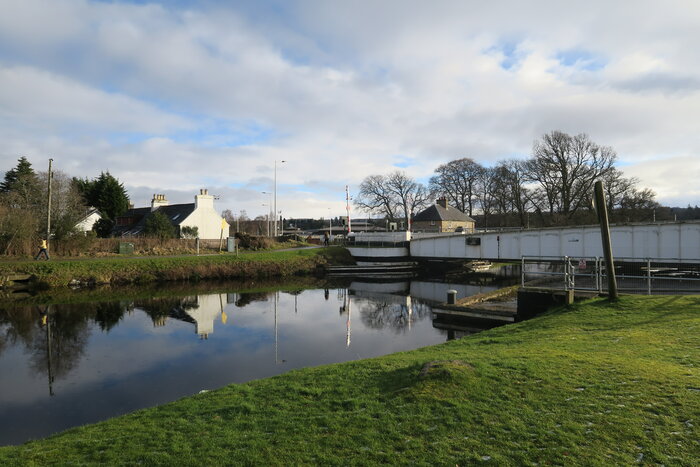 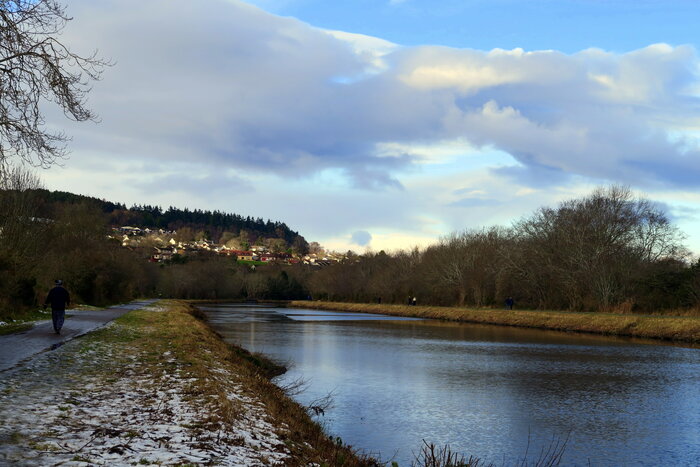 When we lived on this side of town I often walked our dogs Jack and Tess along this side of the canal, so it held fond memories, and the low winter sun and reflected winter trees made it as lovely as I could remember. 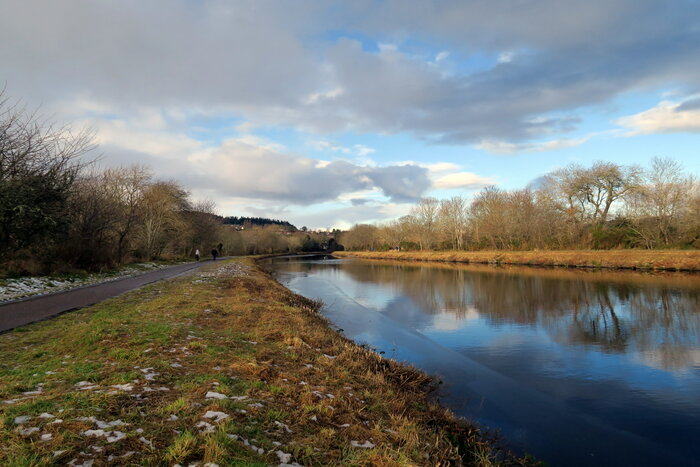 It brought back the week in June 2002 when we hired a boat from Caley Cruisers to celebrate my dad's 80th and the steep learning curve to control the boat in gusty wind coming into the locks. It was sad to pass the boatyard all locked up and silent for the best part of a year - and for who knows how much longer. 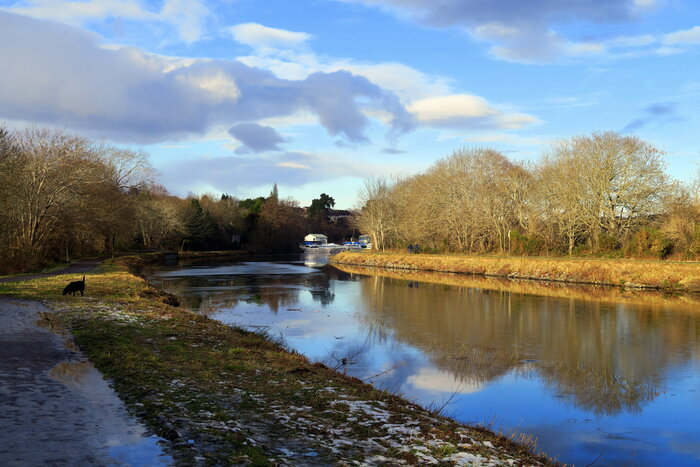 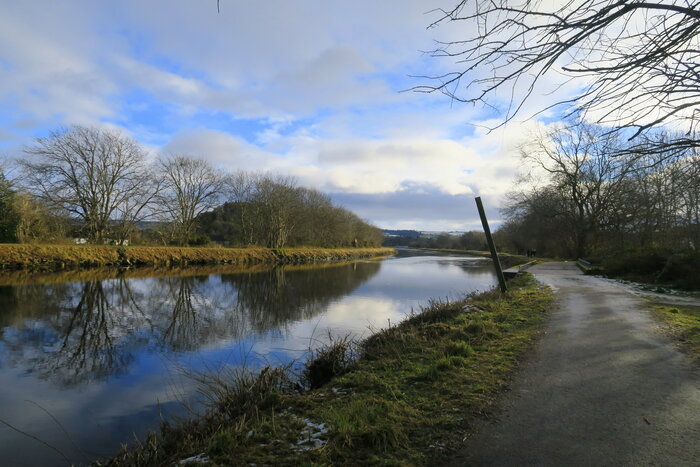 The path detours round the back of the yard before returning to the side of the canal. We had just passed the last of the moored boats when we noticed movement in the water about 10m out from the bank and then made out two otters (Moira said three) playing together in the water.

I think we've got company 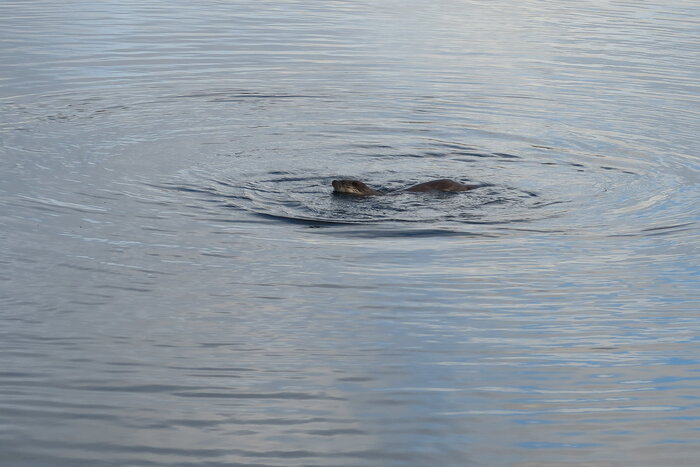 Moving in for a closer look 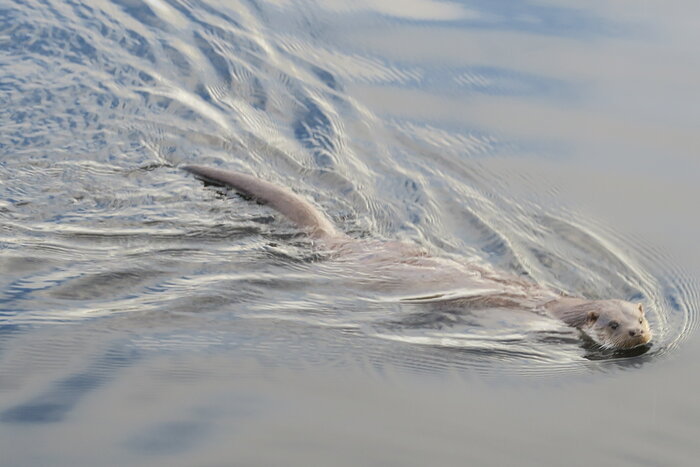 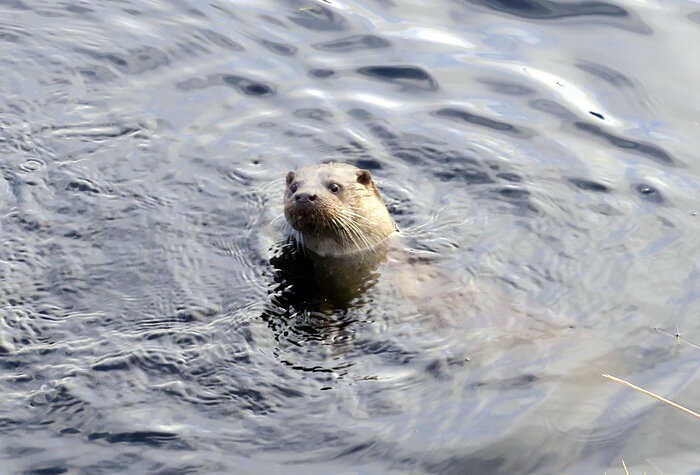 The video shows the fluid movement so typical of otters. When we first spotted them they were out from the bank and seemed almost to be showing off to the audience. I didn't want the dog to scare them off so stood still with Keira standing quietly beside me. Then as if they were curious they came up to the bank near to where we were and had a good look. They are such delightful creatures and the only other time I've seen one in the wild (apart from a dead one by the roadside) was a sea otter up at Tongue and once it spotted me it didn't hang about for a photo. By contrast these Inverness ones seemed almost tame.

The video's not great but gives the idea.

Before setting off we'd had some discussion about which side of the canal we should walk along and were so glad we'd chosen the west side or we'd have missed them. I've been back several times but not seen them again. 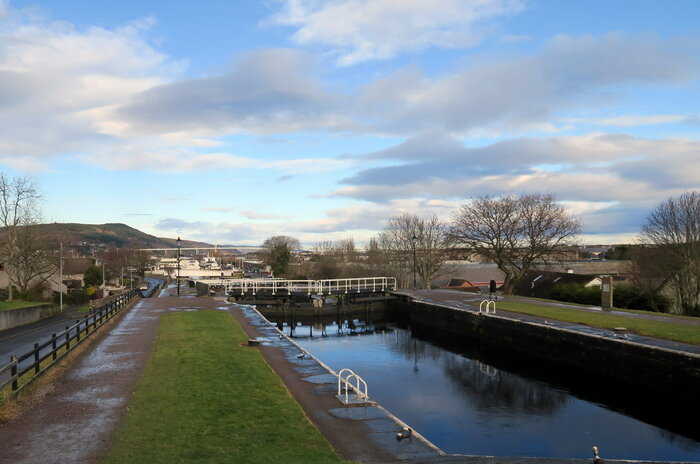 We crossed the busy road and went through the metal gate immediately west of the Muirtown bridge with the open water of Muirtown basin ahead. 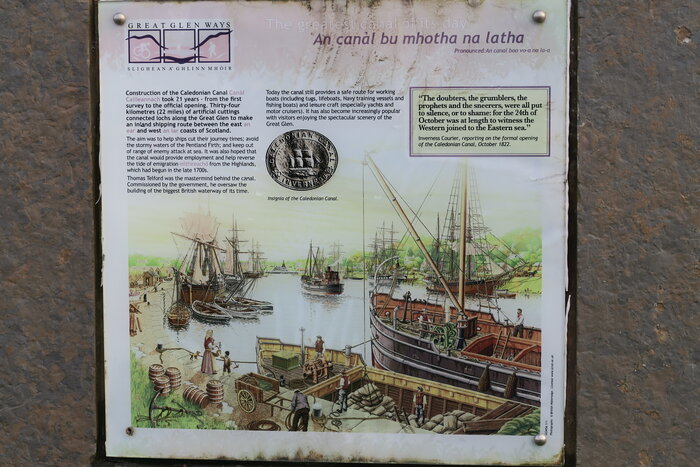 “The doubters, the grumblers, the prophets and the sneerers, were all put to silence” (Inverness Courier, October 1822)

Opened on October 23rd 1822, the Caledonian Canal, Scotland’s longest inland waterway, is by any standard a great feat of engineering. Running from Inverness to Fort William, it follows the course of the Great Glen and provides a safer passage to boats than the more hazardous journey by the Pentland Firth round Cape Wrath..

On paper, the proposal looked like madness – carving out a channel to carry boats through the heart of the Highlands, taking in the lochs of Dochfour, Ness, Oich, and Lochy to create the longest inland waterway ever built in Britain. It was a huge undertaking, considered by many to be beyond the skills of even the great civil engineer Thomas Telford. But with widespread financial hardship following the clearances and thousands leaving the Highlands in search of work, an engineering project such as this was seen as a potential solution to the problem. It admittedly took 12 years longer than projected to build and was £425,000 (£14 million in today's money) over budget, but they did finally get the job done. Sadly with the advent of railways it didn't become the important commercial link it had been hoped, and is now used almost exclusively for tourism. 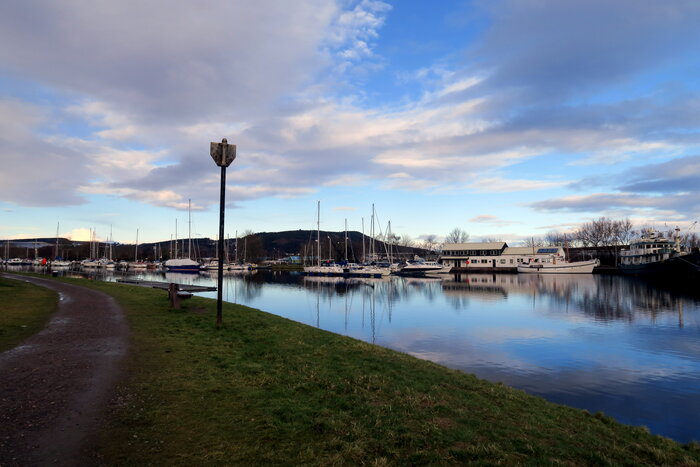 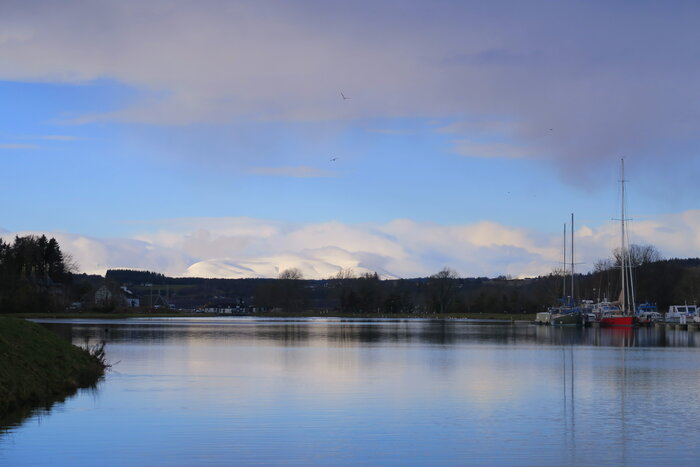 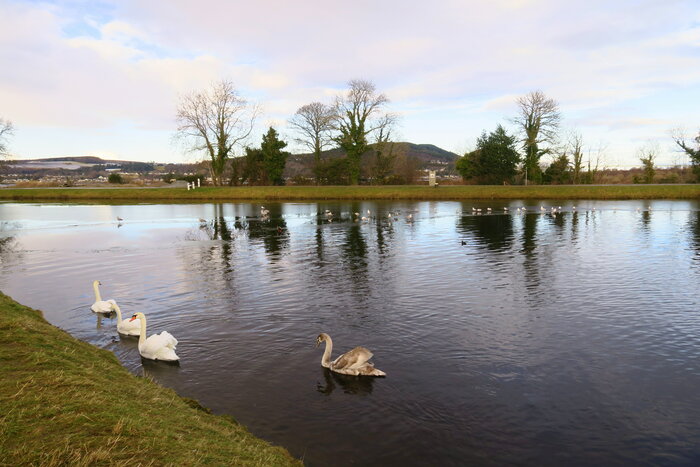 Thanks to Moira for her lovely photo of the swan We crossed the track of one of the most scenic railway routes there are - from Inverness to Kyle. The train drops to crawling speed here so it's a good spot to teach small children the look and listen code. I always put the dog on lead too and let her off again once we're further along the tow path. It's a good place for her to meet her pals and pass the time of day in the way that dogs do.

Where'd you get your red onesie? We recrossed the railway line and turned left down some steps at the sign for Old Ferry Pier. This path goes through the Merkinch nature reserve with tidal lagoons that attract waders and herons and leads back to the railway line which has to be crossed for the third time. It then continues along a seawall with views over the Beauly Firth to the Black Isle.

Beauly Firth from seawall with tide out This leads to a grassy picnic area with tables at South Kessock beside the former ferry jetty. From there we walked along the neat row of houses with the sea view until we reached a signed path to Carnac Point at the mouth of the River Ness. If the tide is right this can be a good spot to see dolphins so worth the detour. Upstream from mouth of river Back on the road the route continues on the west side of the river, under Friars bridge and along to the Greig Street pedestrian bridge which we crossed. The route continues to the foot of the castle from where we were back on the Great Glen Way which follows the east side of the river as far as the Ness Islands. Infirmary bridge which you don't cross After crossing the river via the islands we took the path along the riverside and over the road at the bend by Whin Park on to a path that took us back to the Leisure Centre where the cars were parked.

Wow, the otters are supercute! Can I have one of them as a pet?

Inverness could be called "The Venice of the far north". We have the river, the canal, the loch and the seaside. Just need the gondoliers!

The otters in Inverness were on BBC' s Winterwatch this year; your timing was obviously as good as the BBC wildlife department

I've still to see them either in the river or the canal!

BlackPanther wrote:Wow, the otters are supercute! Can I have one of them as a pet?

Inverness could be called "The Venice of the far north". We have the river, the canal, the loch and the seaside. Just need the gondoliers!

Just beautiful, I see I shall have to widen my Cover walks to the south

We do occasionally get otters in the Cromarty Firth, but I've never had a camera, or phone, with me when I've seen them, but agree with BP they are excessively cute

gld73 wrote:The otters in Inverness were on BBC' s Winterwatch this year; your timing was obviously as good as the BBC wildlife department

I've still to see them either in the river or the canal!

Missed that - but what a treat it was to see them in the flesh!

Huff_n_Puff wrote:Just beautiful, I see I shall have to widen my Cover walks to the south

We do occasionally get otters in the Cromarty Firth, but I've never had a camera, or phone, with me when I've seen them, but agree with BP they are excessively cute

You really should venture a bit further south before restrictions are lifted and we're overrun by staycationers!

Otters! Terrific - you got great shots of them too