Finally got round to doing Creag Dubh, a hill I've seen so often and yet always decided it was too wet, too windy or too snowy to do when I've been in the area having read of the path going close to the edge of the cliffs. I didn't do the WalkHighlands route up, parked instead in a small layby (room for 2 cars) opposite the entrance to Auchmore, and walked a very short distance west to go through the gate and head up the field. My intention was to follow the track shown on the map, but it wasn't clear at the start at all, so I just walked up the hill over rough ground and ended up not going where I'd intended (hadn't meant to head for the monument marked on the map, but that's where I ended up initially as I hadn't bothered getting my map out). Took a curving route round then from the memorial to avoid the steep descent and re-ascent, followed a fence for a bit, then seemed to naturally join the path up the Creag Dhubh ridge as all starting points from this end converge on to one route up the actual ridge. 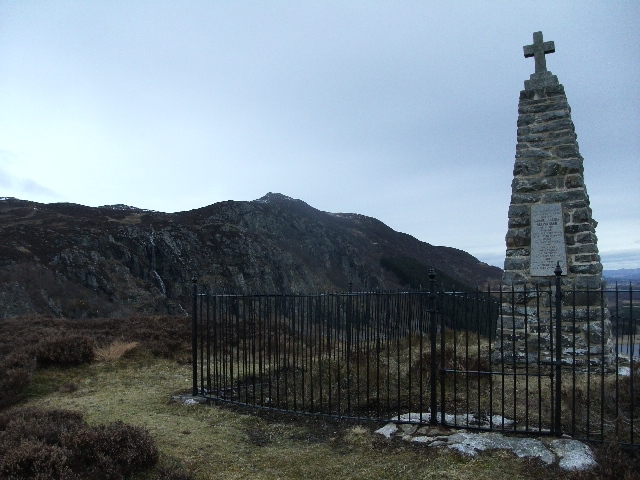 Hadn't been planning on going to the monument, but it was a nice enough viewpoint over to the main target of the day Zoomed to the waterfall and Creag Dubh My rough, roundabout route did meet up with the path - view looking back down towards the south west Higher up, another view back down the ridge 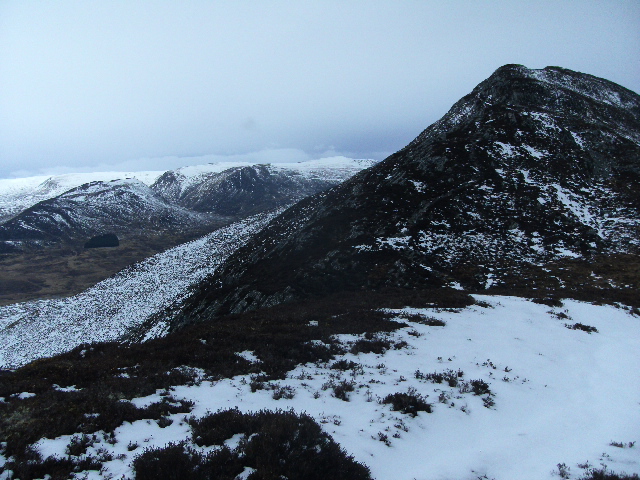 ..and the view of the route ahead

Over a couple of stiles and up the ridge, bits of snow still around. Came to the first cairn but the next, bigger, one looked slightly higher. Good views over to Carn Liath, the graham I did last week, and the Monadhliath munros. Arrived at the first cairn, but the bigger summit one was just a short walk away View south west from the summit cairn - plenty clouds, but all well above Creag Dubh's height To the north west, looking across Glen Banchor, Creag Liath is in the centre of the shot, the graham I did last week from Newtonmore ... Monadhliath munros behind it. There had evidently been another dusting of snow since last week

Headed back down the ridge the same way, but at the 2nd stile, stayed to the right and didn't go over the stile this time. The ground was quite wet and boggy at this part, even when I eventually came across the track. Followed it all the way down to the gate at the start (the track almost disappearing on the approach to the gate, hence me not seeing it on the way up, just a track running perpendicular to the road was obvious). I took a slightly different route back in the lower part of the descent and came across the track shown on the OS map, a mix of stony sections and grassy sections and quite clear on the ground until it nears the gate at Auchmore. The hill on the left across the way is Cruban Beag, a sub-2000m hill with a 590m summit, looks like another good hill for me to do next time I'm working in the Kingussie area

It was good to finally get round to doing Creag Dubh, it looks an impressive hill from Kingussie and isn't a long day by any means. Quite fancy trying it from the other end next time, starting at Biallaid, I'm sure there must be a decent route up through the rocks and trees

We enjoyed this wee hill and didn't follow the WH route either!

Loved this hill which we did at the beginning of one winter when all the far views were draped with mist.