At last some decent weather! Arriving at Elleric at about 9am on Sunday morning I set off down the private road to Glenure, following the route in Nick William's "Central Highlands". My intention was to climb Beinn Fhionnlaidh, camp overnight in Glen Ure and do Beinn Sgulaird the next day. From the map it looks as though there is plenty of flat land by the river for camping. In the event most of it was fenced off, very wet or full of cattle. Also the north face of Beinn Sgulaird looked terribly steep. So much for Plan A!

After crossing the bridge at Glen Ure a wide if muddy track goes east to enter a ravine. Just before the ravine there is a large dead tree which marks the start of a faint path that runs down to a bridge over the river. The west ridge of An Grianan rises steeply ahead. 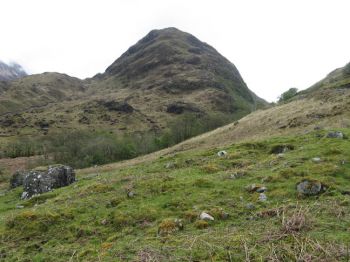 In the book it is described as an "entertaining ascent". However, unless you relish the prospect of dragging yourself up near vertical wet moss and heather covered in poo, give it a miss.

The route did have its compensations,though, in the form of an eagle soaring overhead and a small herd of goats. 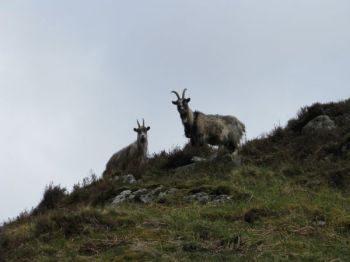 From the summit there were great views of Beinn Sgulaird, Ben Cruachan and the peaks of Glen Etive. 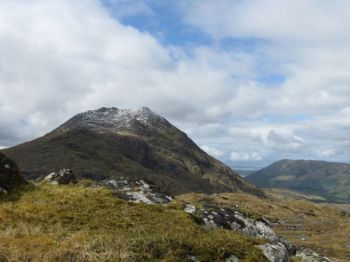 Then I had to lose almost all the height I had gained to reach Lochan na Fola.

If I was doing this route again I would skirt round An Grianan and either go through the ravine and cut across to the lochan from there or follow the Allt Bealach na Innaig. 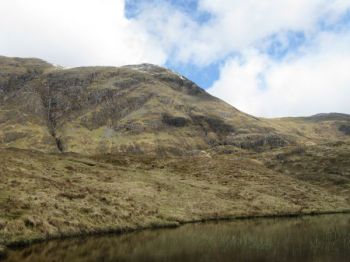 From the lochan I headed north until I reached the aforesaid burn, followed it east for a short way and then crossed it to begin the ascent of the south ridge of Beinn Fhionnlaidh. A brief shower blew across as I plodded up the slope beside the burn: there is no path. On the way up I spotted some sundew. It was a bit of a slog but I gained the ridge (and a path!) and had a well-earned rest admiring the stunning views on Bidean and the other hills in Glencoe. 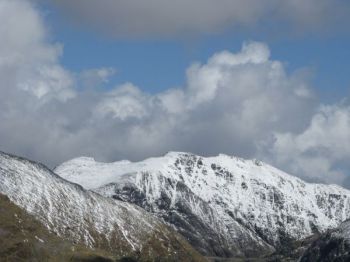 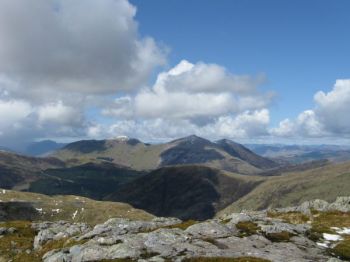 Then on up the rocky ridge, through small patches of soft snow, indulging in a bit of optional scrambling along the way, I arrived at the summit trig point. Someone else was already there enjoying lunch, having come up from Glen Etive. Then it was downhill all the way back to Glenure. There is a faint path along the west ridge which threads its way through rocks and boulders and eventually leads to two lochans (Lochan Cairn Deirg). 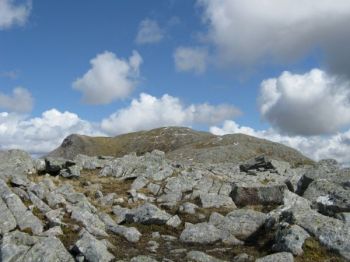 looking back up the west ridge 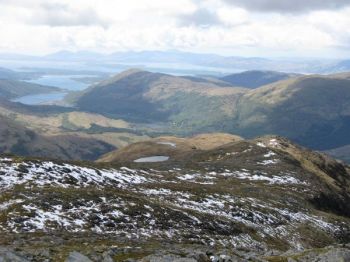 From the lochans it is possible to see the track leading to the houses at Glenure. 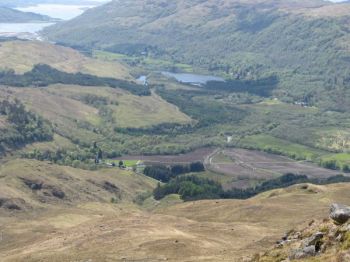 Then there was the problem of finding somewhere to camp. There was some grass along the banks of Loch Creran but I wasn't sure how far the tide was going to come in that night so I opted for a patch of grass in a Forestry Commission picnic area (probably not allowed but needs must). It had several mod cons: running water (only cold though), a sofa (wooden bench) and a a nice green carpet.

There were a few midges but they didn't seem hungry and I had a pleasant evening eating chicken curry on the sofa. I was disturbed in the night by rustling in the undergrowth but decided not to investigate.

I woke at about 7am to another glorious day and after a quick breakfast I drove the short distance to Druimavuic. The path to Beinn Sgulaird starts from a flood warning sign and goes past a lovely garden with lots of rhododendrons and then through some woods before emerging at a gate. Once through the gate the track continues straight on before winding to the left. I didn't realise that there is a big loop in the track and I should have stayed on it but it looked as though it was going the wrong way (it isn't on the OS map) so I headed off through the heather. On regaining the track I found the path up the ridge marked by a small cairn. What a delight to have path after yesterday's experiences in the moss and heather. The path zigzags up the hill to a spot height at 488m. It actually contours round the spot height and then drops steeply down and crosses a fence before climbing again to another spot height at 863m. All the way up I had to keep stopping to take photos 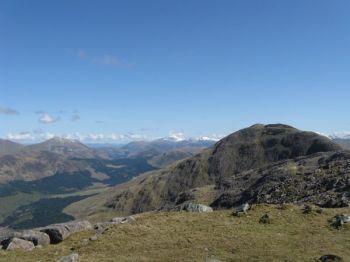 as the views opened up to the west revealing a sparkling blue sea and, further away, Mull. 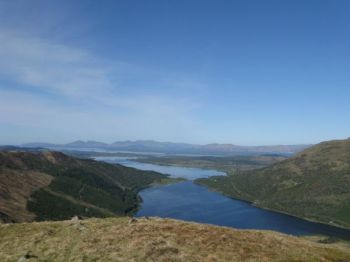 On reaching the cairn at 863m There are great views of Ben Cruachan, Glen Etive and the hills beyond. Then there is another rocky descent before climbing again to Meall Garbh. 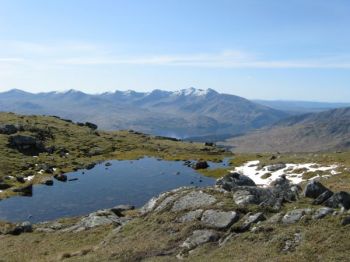 The ridge leading to the summit gives a wonderful high level walk through rocks, boulders and little crags with spectacular views all around. The best part of this walk is the views: you have to do it on a clear day. From the summit you can see peaks all the way from Stob Binnien and Ben More to the Paps of Jura and from the Grey Corries to Ben Lui. I met a guy on the summit who had done 59 Munros in about 4 weeks: he looked very fit! 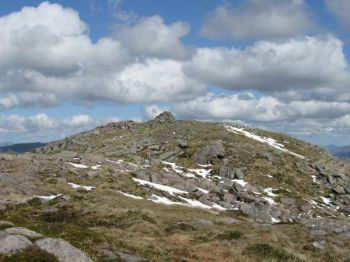 I retraced my steps along the ridge enjoying the scenery. I did toy with the idea of doing the Corbett, Creach Bheinn but decided against it. Must be getting old!

Enjoyed that - I never liked the look of the direct climb to Sgulaird from Glenure either. Why bother when the Drumavuirc route has such great views (and easy going until the final ridge)

I'd never heard of climbing Fhionnlaidh the way you went

In the book it is described as an "entertaining ascent". However, unless you relish the prospect of dragging yourself up near vertical wet moss and heather covered in poo, give it a miss.

Nice report - Richard will be really upset that there is some scrambling on Beinn Fionnlaidh after all... he hated it for being sooo grassy on the easy route we went up!

Nice pic of a sundew - never seen one of those yet...

Great story and pics. I love the one of the carnivorous plant.