I had walked with a D of E Gold group from Dornoch to Ullapool the previous week and had used it to recce a route up Senna Bhraigh and along with the report from holtlynx that I read here I really fancied a big day out by coming in from Oykel Bridge. I also planned to add Eididh nan Clach Geala and Meall nan Ceapraichean for good measure.
I drove out to Oykel Bridge and then drove along the track to Duag Bridge were I parked next to the bothy. You can drive much furter up and park in the walkers car park up by the Corriemulzie Lodge but as I hadn't been up there before I bottled it and parked down at the bridge. The track from Oykel Bridge is best described as rough, I have a volvo V50 and on a couple of occasions there were horrible noises coming from underneath as I grounded it on the central bit. Bascially it is fine driven with care but in some places the wheel ruts have worn down and left a fairly high central ridge down the track, on the way back I avoided the worst bits with some gentle swerving.
Anyway I parked up, took the bike off the roof and headed for the lodge and beyond. As I have said for anyone following this, there is a signposted walkers car park just before the lodge, I cycled past there having huffed and puffed up the hill, kicking myself for not having had a look before I parked up, but in the back of my mind I knew it would be quite fast and good fun going back down to the car, so not all bad then.
As I cycled along the track towards the hills I saw the cloud was sat on the tops and I knew that I might face some time in the clag with the compass out. I left the bike where the track crosses the river on the map and headed up the gentle but wet slopes towards the 760m spot height. As I walked I saw bog murtle, bog aspidal and bog cotton as well as a few frogs so all the clues were there as to under foot conditions and indeed so it turned out for much of the day. I always find on these 'same route back as out' days that your mind wanders to the return leg as you plod along wondering amongst other things how knackerd you will be when you stand once again where you are now, sometimes even will you make it back to where you are now, but onwards for the time being. I picked a line up the steepest part of the ridge and made it to the small lochan next to the 760m with relative ease, from there a hop and a skip over some large boulders and soon I was stood on Senna Bhraigh.

Onwards then down past the 906m top once again thinking that I was going to have to summit Senna again in a few hours time, I caught a glimpse of my next objective Eididh nan Clach Geala in the distance and once again marvelled out how map makers can make places seem so much closer than they look in real life. 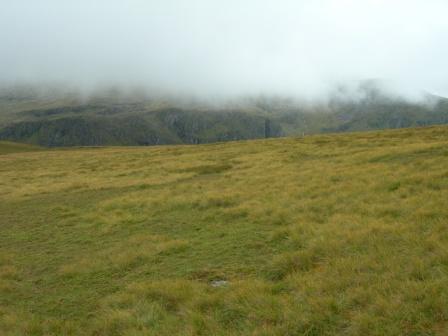 Between me and it looked to be moon country, I hadn't seen a soul all day so far and that didn't change in this fantastically remote part of Scotland. 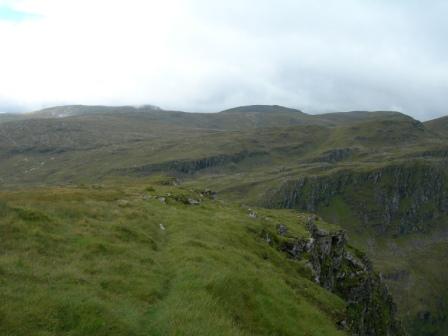 I headed down and past the top of Cadha Dearg and was quite pleased I was just out of the cloud as I saw the big drops and nice waterfalls. 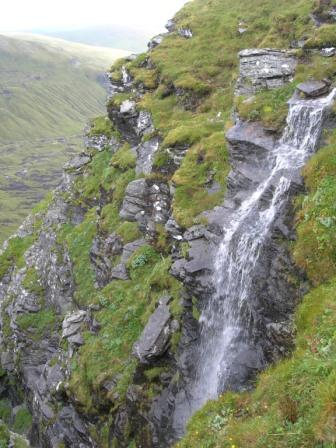 I then headed straight across via the 3 small lochans, past the 808m and eventually up the slopes of Eididh nan Clach Geala in the cloud. Nothing to say about this as it was all light grey and a bit damp.

It was at this point of the day that the whole 'got to go back the way you came' warning light came on and I thought about Meall nan Ceapraichean. I reckoned I would be standing where I was now in about and hour and a half and eventually I decided that I would leave it for another day. (A fantastic winter day as it turned out)

I turned and headed back down through the cloud and back the way I had come, I retraced my steps and then realised that the cloud was slowly lifting although it never quite cleared the top of Senna Bhraigh until later when I looked back up from my bike. 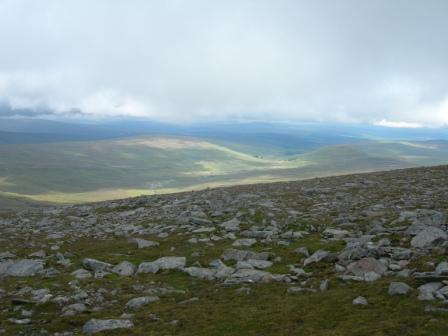 Back over Senna and down over the bog back to the bike. The downhill bit back to the car was great and I thank the lady in the red van who pulled over to let me past as she saw me looming in her mirrors.
A throughly superb day, very remote, very rewarding as well as very long and very tiring. Highly recommended day out.