If you're reading this because you're thinking of doing Carn Salachaidh, then I'll give you one tip: You'll look across from the approach track and see this view ... at this point it would be a good idea to think which way you're going to go up ... I'd go for Option A. (I WOULD go for it , I didn't say I DID go for it...)

Do not take Option C.

There's not really any room for parking where the track starts opposite the red letter box at Gruinards Lodge, so I continued on about 700m west along the single track road and parked in a larger area where my car didn't impede the passing place or the entrance into the field. This actually worked out nicely, as it meant I had this short section of flat walking as a warm up back to the track to start off; it's then quite a steep start to the walk once you go through or over the ramshackle gate opposite Gruinards Lodge. Although initially steep, and boggy later once up on the moorland, the track is easy to follow all the way to when it becomes a path dropping down to Allt a'Ghlinne. The water was quite audible and I was wondering what crossing the burns would be like, but fortunately it was much easier than I'd expected. Good track to follow, though some soggy bits further on Where the track reaches the Allt a' Ghlinne, no need to get wet feet getting across

A trodden path continues up the other side of the bank and comes to the burn coming down the hill. At this point you can take your pick whether to continue up the west side without crossing the burn, or cross the burn and continue up the east side of it. Or, like me, you can cross the burn and instead of continuing up beside the burn, ignore this sensible option and head off to ascend the steeper, higher part of the slope in thigh deep heather. Nope, I have no idea why either.

On the good side, the route I took up was a marvellous aerobic workout using all muscle groups. I'm 5ft 5, and maybe if I'd been a foot taller the heather would only have been to my shins and knees instead of knee to thigh deep - but compared to the tame ankle deep stuff I'd passed by on the moorlands earlier in the walk, it now felt like I was in some tv horror scene from Day of the Triffids ... where someone had also tipped the screen to a 45 degree angle. Normal walking was out the window and I ended up grabbing at the monster heather and hauling myself up the hillside. You've got to love the lesser trodden grahams. Half way up and I stopped to admire the beautiful scottish heather I'd waded my way up through so far ... ...and the beautiful scottish heather to either side ... ..and the beautiful scottish heather I had yet to drag myself through ...

Eventually the tree-like heather subsided and I reached the top of that section. Phew. It was about another kilometre over a bump and then a bit of undulating ground with occasional boggy section or peat hag to tackle to get to the final upwards section, avoiding the crags and snow. I couldn't see any trig point initially on the rocky summit area, but wandered over to the higher point on the left and past the rocks, and there it appeared. Still not the actual highest point, that was the obvious lump of rock a few metres over. Not the best day for views, couldn't see the Assynt hills and nearby Carn Chuinneag was doing its best to hide under a cloud, but at least the summit I was at was clear, even if too cold and windy to hang around at. It was a shame to leave the beautiful scottish heather behind, but at least I could see Carn Salachaidh again now

Just as well I stopped to take a pano of Carn Salachaidh and Carn Chuinneag at this point, as it was pretty much the last I saw of the latter ... ...By the time I was at the trig point, Carn Chuinneag's summits had disappeared under a cloud 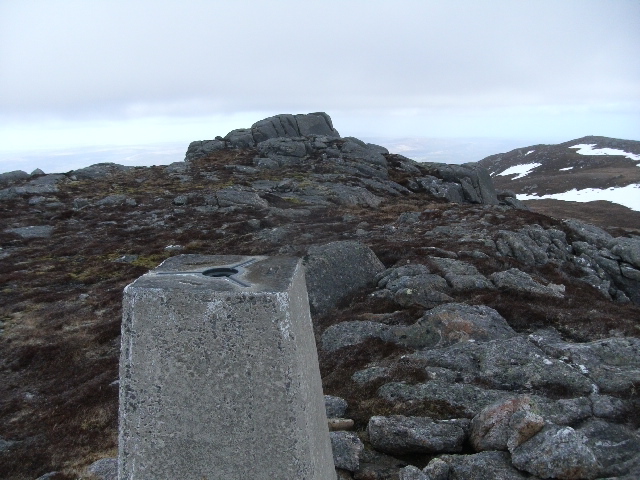 Ah, that'll be the summit over there then 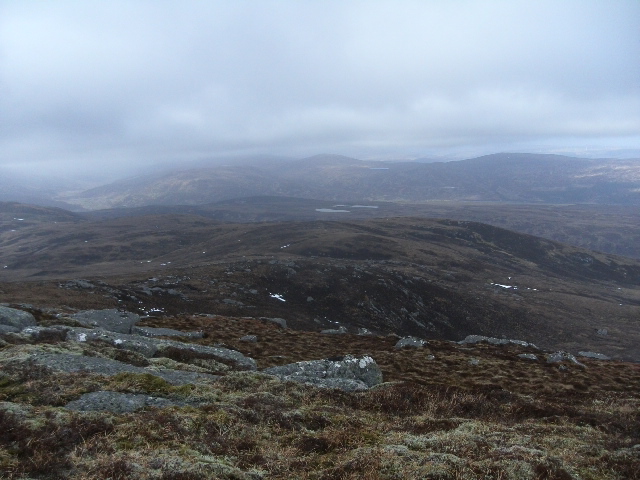 ..In fact, no distant views in any direction unfortunately

More or less retraced my route EXCEPT headed over towards the burn this time and enjoyed the luscious green carpet of wet grass to walk down, rather than tie myself in knots in the slopes of deep heather. I couldn't fathom why I'd not taken this route up! I was so busy looking around now that I was on lovely grass that I slipped on it and ended up splatting my elbow into a soggy pile of deer poo. (It was a soft landing at least). 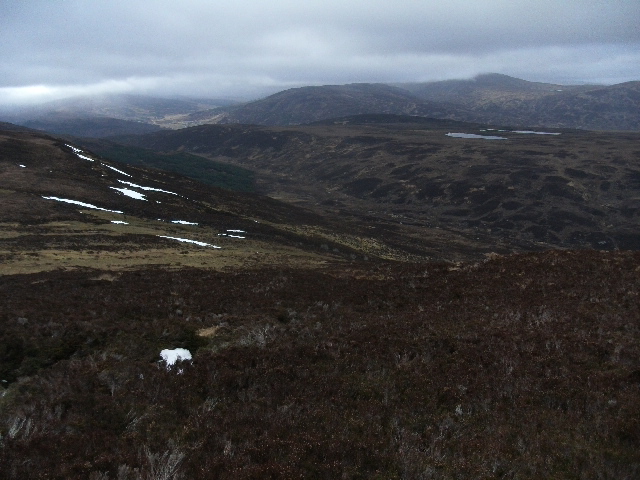 This time, instead of heading over the wee hill and down through the beautiful scottish heather, I headed diagonally towards the burn and the tempting green ground Ahhh, yesss ... this is better Looking back up. (I'm just putting this photo in to remind myself to follow the grass and head just to the left of that big rock next time I do this hill..)

The grass did end and there were a few metres of heather to go through before reaching my initial route at the crossing point across the burn coming down the hill. If I'm ever standing at that point again, I know which way I'll be going up! When faced with Options A, B or Crikey, no, no, not that way, I'd strongly suggest Option A. (Not that I tried Option B)

So that was that. Quick wash of the arm of my coat in the Allt a' Ghlinne, then a light drizzly rain shower and increasing cloud for the walk back along the track. And overall, an oddly enjoyable afternoon's walk

Re: The Beautiful Scottish Heather of Carn Salachaidh

Just out of curiosity, I checked my old report from this hill, we took option A. It was still very scratchy though

Might revisit CS this year, I wondered about approaching it from Diebidale side, a longer walk but on a good track most of the way, hopefully less heather to cope with?