Bachd na Craig (The border and back)

Bachd na Craig (The border and back)


This walk is actually photographs from two walks; the first being Monday the 15th of March and the second Saturday the 20th of March. Truth be told on the Monday weighted down with full Winter gear; boots, crampons, ice axe etc I got no further than Bachd Ban at approximately 590 metres when I ran out of strength in my legs. This second walk, without the heavier Winter gear, was successful and took me from Dalnamein to the border of Perth and Kinross and Highland Region with a return by the outward route.
Turn off the A9 at the sign for Dalnamein and park on the rough ground immediately on the left. There are three bridges crossing the Allt Anndeir at this point before it flows into the River Garry. The bridge crossing the old A9, the bridge crossing the current A9 and an old stone bridge with what looks very much like it was a mileage marker stone which sadly has become illegible over the years.
From there, at approximately 260m, I crossed the A9 and over the gate, taking the track heading to the left. Soon you enter a thinly planted forest and head uphill in a Northerly direction exiting from the forest at about 320m. The track carries on almost directly North and you soon spot the remains of Ruighe Chail and Glas Choire Lodge in the distance. The track drops down sharply to 310m to cross the Allt Glas Choire over a modern bridge where about 20m downstream can be seen the remains of the old crossing. The track then climbs sharply to the remains of Ruighe Chail 370m. About 300m along the track and down on the left is the remains of Glas Choire Lodge. It was built in the 1820s and contained a sitting room, five bedrooms, stables, kennels, a coach house, a peat-drying shed and keepers cottage. It was sold by the Duke of Atholl in 1852 but re-purchased in 1892. He decided that the lodge was too small and unsuitable for improvements as it was inconveniently situated, so it was left empty. The keepers cottage at Glas Choire Lodge was in use until the 1920s when it was accidentally burned down. A couple of hundred metres up the track from Glas Choire Lodge the track splits and I took the right hand track. The track traverses around the Western side of the Druim Ruighe Chail reaching its highest point at 440m and descends very gently to the foot of Bachd Ban. This track along the West side Druim Ruighe Chail had many puddles which were full of frog spawn and many frogs. The track then ascends the South ridge of Bachd Ban but stops at 550m. The next couple of kilometres between the finish of the track on Bachd Ban and the ascent onto Bachd na Craig are probably the worst couple of kilometres I’ve ever traversed. The ground is generally level whilst sloping ever so gently to the East and therefore does not drain very well. There’s no great ascent or descent but the ground is marshy, covered in tussocky grass and small stagnant pools. Even on what you assumed was normal ground you could feel yourself starting to sink in. In many instances it was a case of going right and then doubling back on yourself to make any progress.
Once you reach the foot of Bachd na Craig at about 650m the ground becomes more solid and better progress can be made. From the rather small cairn at 760m you can look North down towards the Allt Gharbh Ghaig - the hill on the other side is probably Meall Odhar Aillig. Through the rather sparse forest Out of the forest Glas Choire Lodge in the distance Remains of the original footbridge Where the path splits - we go right 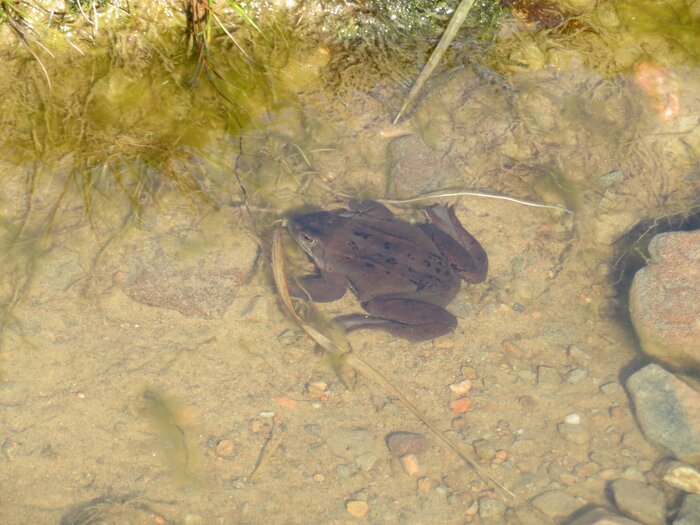 Frogs and lots of them Stone with attached iron ring half way up Bachd Ban