I was surprisingly feeling pretty fresh the following morning after the 50km Ben Alder trip and with another fine day forecasted we decided to hit the hills again but rather than run, we would go hiking instead. After consulting some guide books and the usual websites, we stuck upon Meall Buidhe in Glen Lyon. The quickest way is to park just east of the Giorra dam of Loch an Daimh and head up over Meall a’Phuill to the top then retrace your route back down. I am not really keen on ‘there and back routes’ so we decided to approach the hill from Bridge of Gaur instead and perform a big loop taking in the Corbett, Cam Chreag as well.

We were a bit late setting off and did not park up until just gone 11am. The good news was the sky was virtually cloudless so a good day looked in store. We set off up the path that hugs the Allt an Fheadain and quickly realised in fact we were heading up the path that skirts off towards Meall Chomraidh. Great start! A quick detour across the burn put us back on track and soon we were heading south towards Meall Caol. Milo, our Giant Schnauzer, thought it would be great fun to chase a mountain hare/rabbit and fair play to him, he put up a good chase but thankfully the rabbit escaped unharmed. As we headed towards a wooded area on the map we were thwarted by a huge 8 foot fence and a massive stile. After a bit of huffing and puffing, we managed to get both dogs over and continued to head south. At Coire nan Cnamh we headed uphill and followed a stream up towards the bealach between Garbh Mheall and Meall Buidhe. There were patches of snow still and the dogs had great fun running up and down. As we headed up the north slope to the summit of Meall Buidhe, the wind picked but it was not significantly intolerable. The views from the top were pretty amazing and we could see our route circling around, taking in Meall a ‘ Phuill and then down to Coire Odhar and up to Cam Chreag. The walking was fantastic on the top and we made decent progress on the firm snow. We dropped down to Coire Odhar and the ascended up to towards Cam Chreag. Progress was slow over the tussocky ground but eventually we reached the summit. 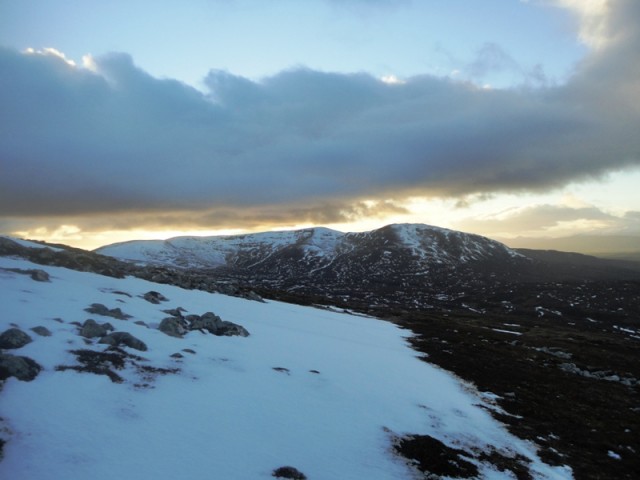 We still had a decent distance to go and it was highly likely we would be finishing in the dark. Good job we had the head torches. We continued over the rocky ridge and then dropped down to the Cul Lochan. From here we picked up a narrow stalkers path that followed the Caochan Mor initially and then the Allt Leac Ghiubhais back to the bridge at the Luban Feith a’ Mhadaidh. There was two more huge stiles to traverse and the dogs were seriously unimpressed at being man-handled over more stiles. By the time we hit the main path, it was gone six pm and dark. We got our head torches on and headed down the path towards the Bridge of Gaur. I had failed to bother checking the map and assumed the path down was the correct path but after 30 minutes of walking I had a feeling that something was not right. Even though it was dark, the terrain was not familiar. we had taken the wrong path

To be fair to Emma, she did not ‘go off on one’ but the look of dismay in her face said it all. Instead of heading down, we should have picked up a stalkers path that skirts around Leagag and then headed down. Whoops! We turned around and headed back up the path. Eventually we arrived at our turn off point and picked up the narrow path around Leagag. The path was pretty indistinct and navigation was quite tough in the dark, but we eventually arrived on the ‘correct’ path and headed down to the Bridge of Guar unscathed

Meall Buidhe.gpx Open full screen  NB: Walkhighlands is not responsible for the accuracy of gpx files in users posts

Great route choice(apart from the error, obviously)! After doing Cam Creag a couple of weeks ago, I looked at the map and thought if I ever wanted to combine these two hills, going from the north would be a very good way to do it. Would give the chance to go up Leagag as well. Your photos are certainly selling this idea to me quite nicely

Epic stuff once again Daz! I love that area around Cul Lochan, Cross Craigs and Leagag.

An interesting route, including the errors! And excellent photos.

On our day on Meall Buidhe me and my son had very similar conditions to yours, lovely blue sky and very cold - I seem to remember wind chill of -20 being the forecast. Best though was the spindrift blowing over the ground like a mist, and the wind devils. A day for goggles at some points. Here's a couple of photos, great to remember that day.