Regular WH forum visitors probably remember my interest in historic plane crash sites. It might feel odd that someone who has no technical knowledge of aviation (I can just about tell the tail from the cockpit

) became so obsessed in tracing pieces of broken metal up the hills. Well, it is kind of a sidekick hobby for me and Kevin and since we are more likely now to repeat mountains we have already done, just as well we prefer to visit them via new routes, including a crash site if possible. This was the case with Cranstackie, Scaraben, Bennachie and Lochnagar, to name just a few hills with additional points of interest. Sometimes, a crash site visit is a good alternative if weather turns too sour to venture onto high ground. But this time, at least in Kevin's opinion, we outdid ourselves by walking a 20 miles round trip, just to see (and photograph) some mangled scrap in the middle of bl***dy nowhere.

I'd like to underline that our trips are of purely documentary character. We research all available info about the crash, go to the site and take photos, later I compose my TRs. We NEVER disturb the wreckage, move it, kick it or take anything with us. Many of these accidents resulted in casualties and every story attached to the brave souls lost to the Scottish mountains is a tragic one. Only one crash site we visited is an actual grave (Avro Anson on Conival) but they all feel spooky. I am a down-to-earth person and don't believe in ghosts but I still wouldn't want to visit such places after dark!

In case of the site described in this report, it would be unlikely to meet any ghosts, as luckily, all crew survived the accident by baling out. So this particular plane was empty when it crashed. Still an interesting historic site to visit and the fact that it is so remote only whetted our appetites!

Two years ago, in May 2019 (seems like another era now, the pre-COVID days) when we wild camped by Alltbeithe hostel, in an attempt to climb Sgùrr nan Ceathreamhnan, we didn't realize how close we were to the crash site of a Vickers Wellington T2707 (a twin-engine, long range medium-sized bomber designed in the mid-1930s in Surrey by Vickers-Armstrong and used mostly for night time bombing in early years of WW2). Only later when we discovered, it was less than a mile from the hostel, we were kicking ourselves! Since that moment we became obsessed with this particular wreckage and desperate to visit the spot. It is located on the north-western slopes of Mullach Fraoch-choire (NH 076193). The shortest approach is from the south, from Glen Shiel, but this requires miles of bog-hopping, therefore we always knew we were going to reach it from the Affric side by a good track. It also meant that the starting point is close enough to home and we could do it now without breaking the COVID restrictions.

Track_AFFRIC WELLINGTON 31.7KM.gpx Open full screen  NB: Walkhighlands is not responsible for the accuracy of gpx files in users posts
The day was sunny but very windy. Far too windy for high hills, but our target was only on the height of 300m, so it wouldn't be covered in snow.
Good morning , Glen Affric!

The walk along the southern side of Loch Affric is always a pleasure, we enjoyed the fantastic views and the feeling of solitude (no one else was daft enough to plan a 20 mile trip on a blowy Tuesday in March!). It took us less than 2 hours to reach the opposite end of the loch:

After a short rest by the cottage, we continued on the track into the glen. Most time it was easy walking but a few stretches were...hmmm... a bit wet: 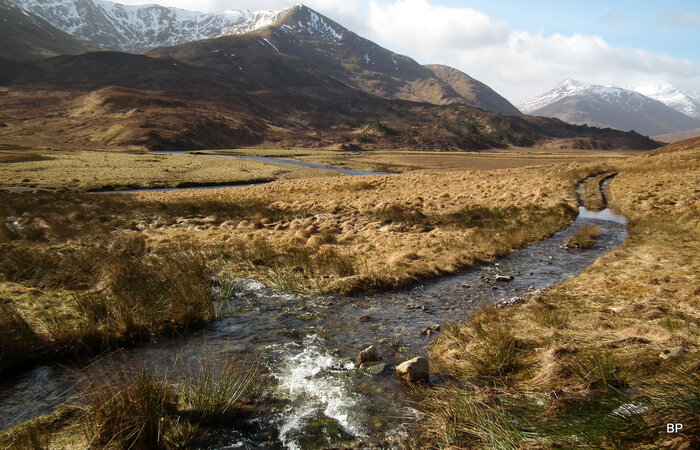 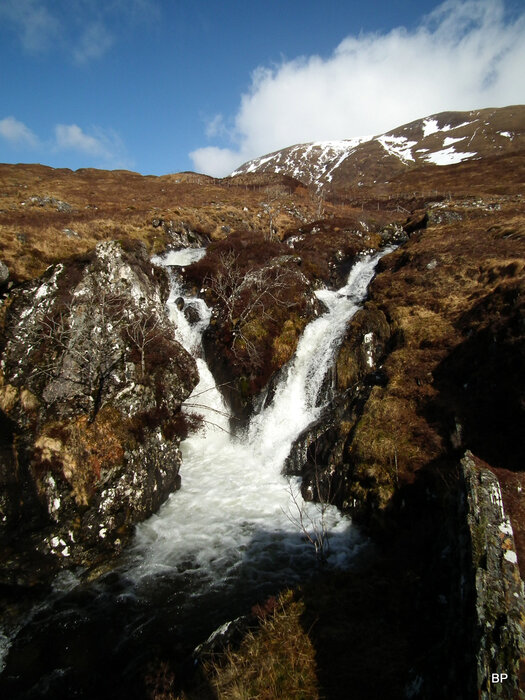 The track continued west into the remote glen, with Beinn Fhada on the horizon:

Rivers and streams were in spate, but even when they were too wide to jump over, we found alternative means of crossing: 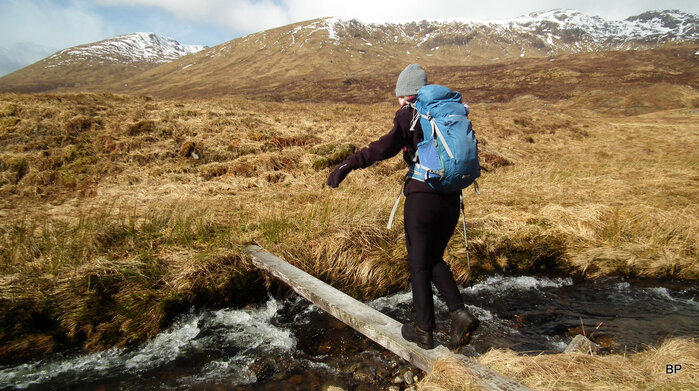 Not all aspect of our walk were nice, sadly. We counted eight deer carcasses in different stages of decomposition (no photos, sorry), all lying on or very close to the track. Poor sods must have became trapped in snowdrifts when winter was at its harshest

We reached the hostel at about midday, it was closed of course. I doubt it will open this summer... 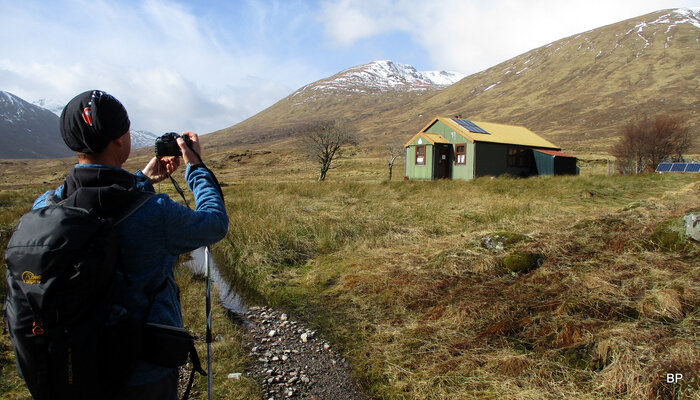 To find the crash site, we had to cross River Affric which was a raging torrent, but we remembered a fancy footbridge close to the hostel.
No, not this one... this is the one to Morvich 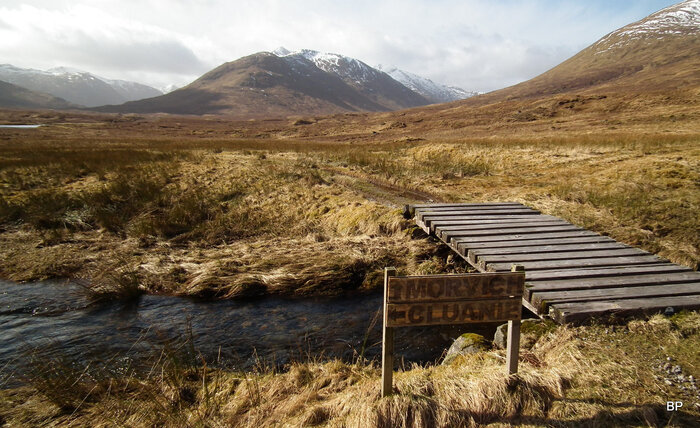 Lucy found the right one! 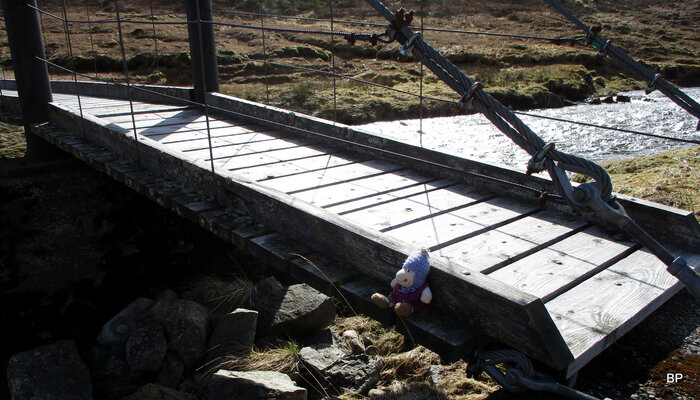 The bridge and Glen Affric Youth Hostel from across the river: 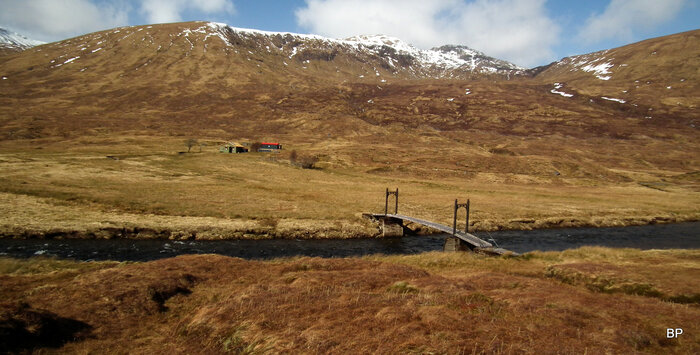 According to our research, the crashsite was only about 1 km SW from the bridge, following the edge of a forestry plantation. This was the only boggy section of the approach, including crossing a fence on a wooden stile, but the "path" is officially part of the Cluanie-Affric right of way, not that being an official right of way makes it any less squelchy

Views west from the wet path to Gleann Gniomhaidh, Beinn Fhada and Beinn an t-Socaich: The right of way passes just above the crash site and as soon as we neared the grid ref we had from our "aircrash bible", we spotted the first pieces of metal: 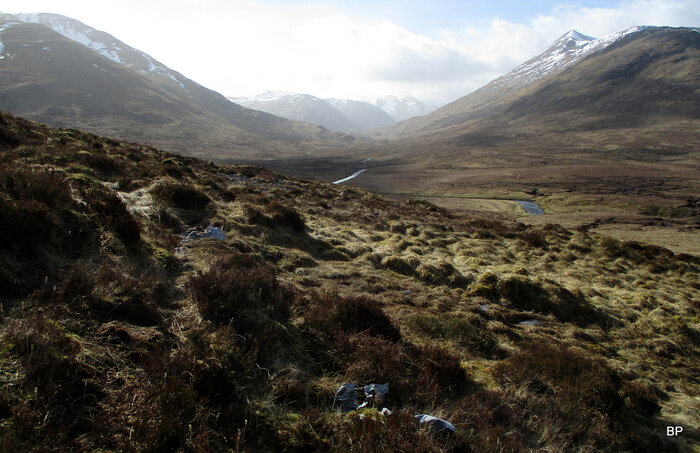 There is a substantial amount of wreckage at the site, most of it very close to the impact scar (which is still visible). We found many pieces of mangled metal in a small area at an altitude between 320 to 290m.
According to Aircraft Wrecks: The Walker's Guide:
"The impact point is marked by a scar in the rocky ground, strewn with shattered pieces of geodetic framework, from the wings and fuselage and other wreckage. One of the Bristol Pegasus engines is recognisable, but the cylinder heads are detached. These lie scattered nearby with those from the other completely shattered engine."
Kevin in the impact zone: 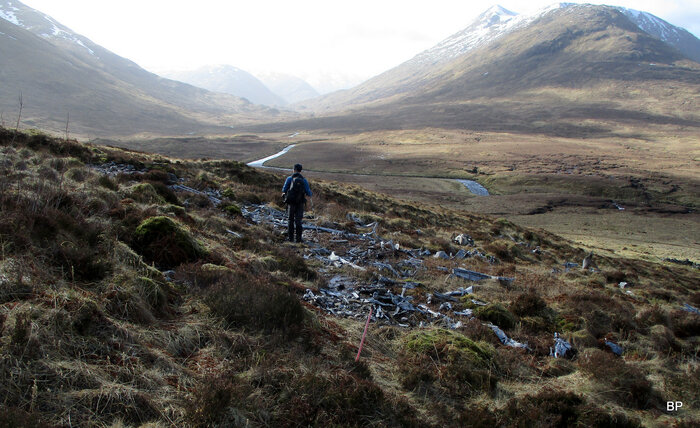 The most impressive piece of wreckage is one of the propellers, precariously sticking out from the vegetation: 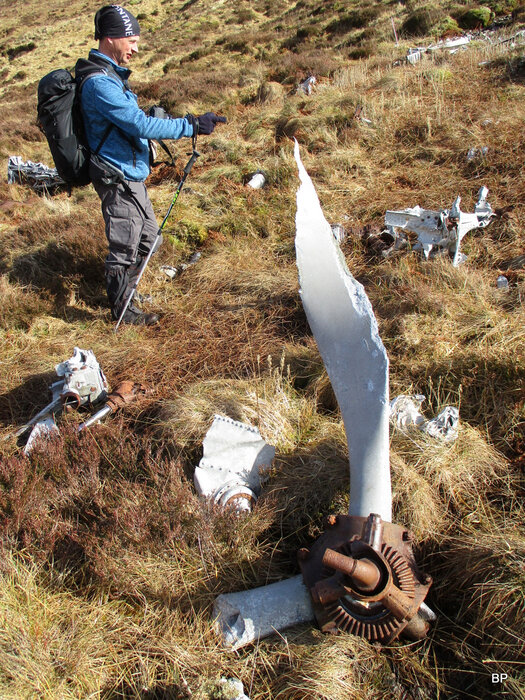 We tried to identify as much as possible, but since the plane impacted the mountain side at its full speed, the wreckage is very fragmented. Did our best though.
Parts of geodetic frame: 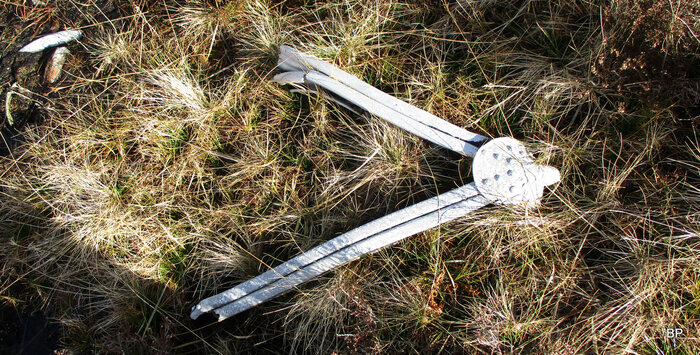 One of several armour plates: 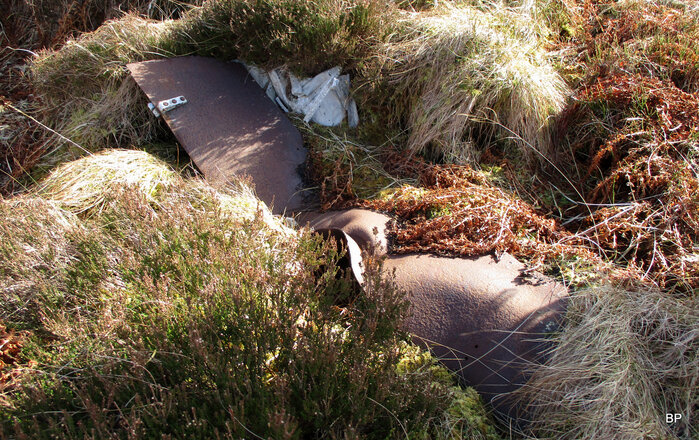 A drive ring from one of the gun turrets: 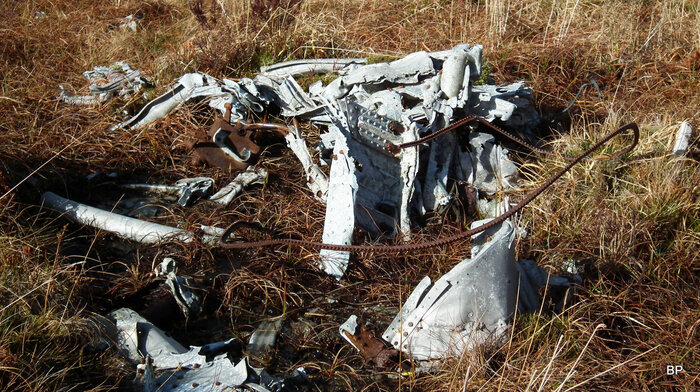 A recognizable part of the undercarriage, sadly the wheels are nowhere to be seen: 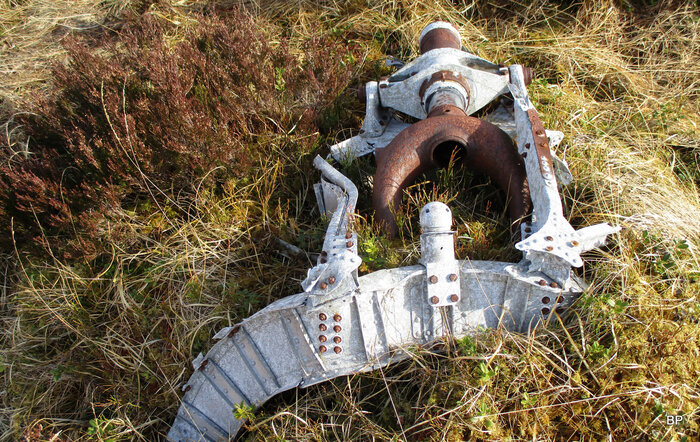 One of the engines (the better preserved one) and an oxygen bottle: 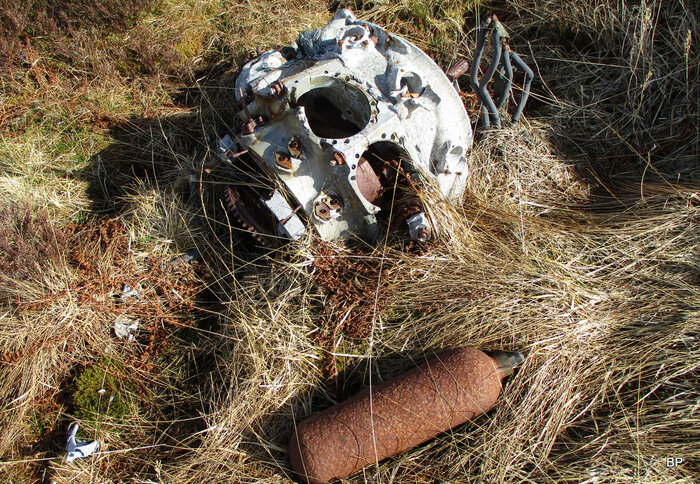 Another oxygen bottle, wrapped around a piece of fuselage: 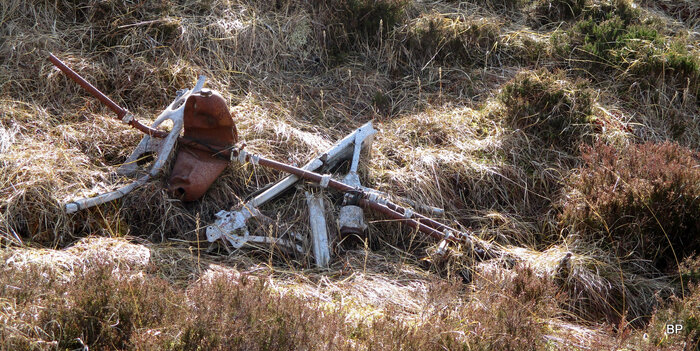 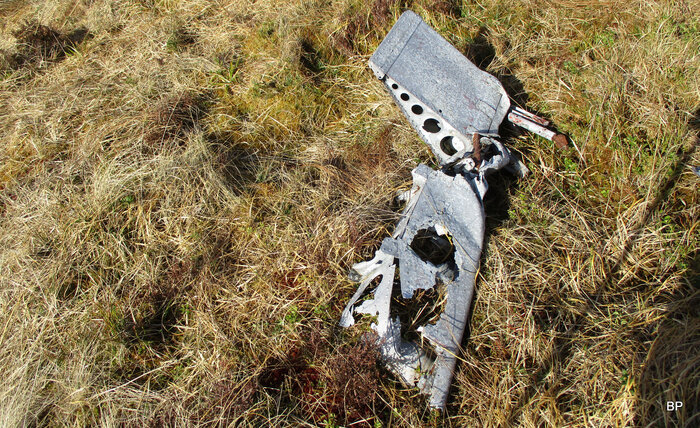 Cylinders from the second engine: 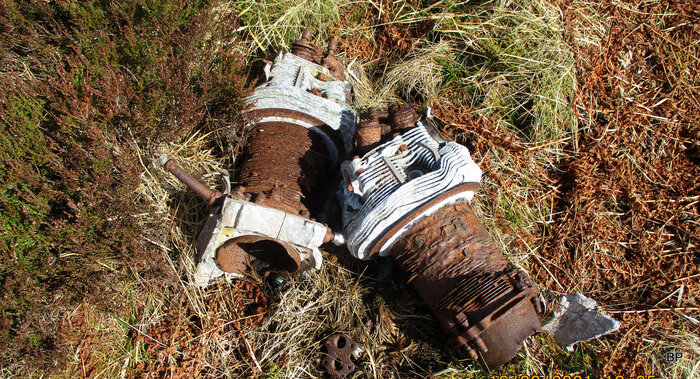 The main shaft of the second engine, found lower down the slope: 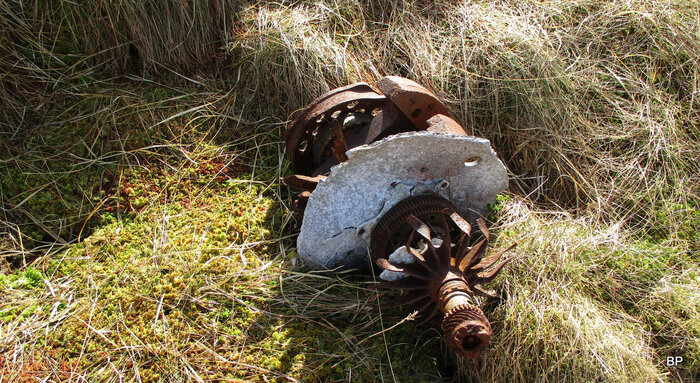 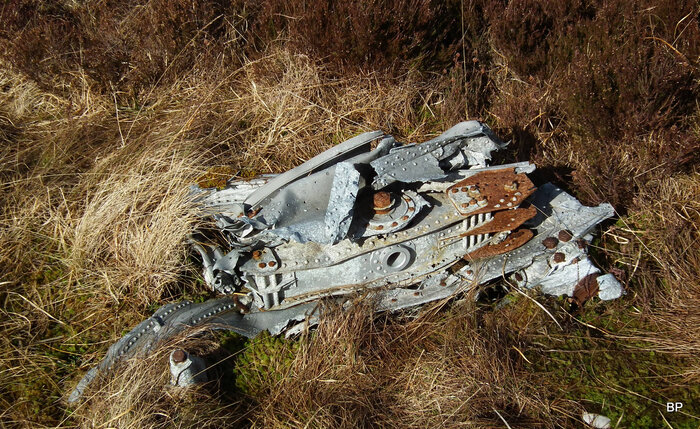 A large piece of metal framework: 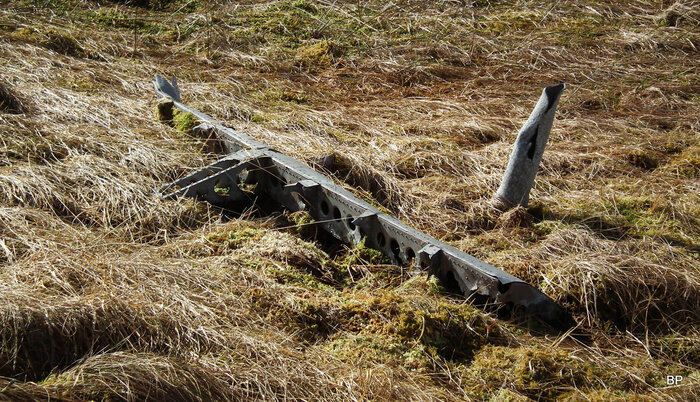 A filter of some sort or maybe a radiator? 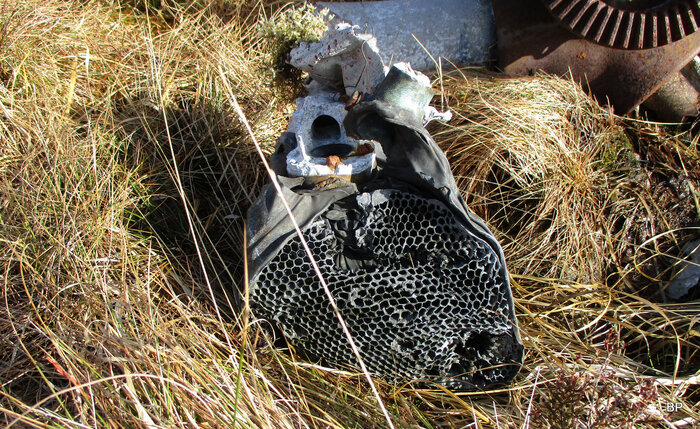 Looking at the carnage at the site, we felt relieved that nobody died in this particular crash! I was overwhelmed - we expected to find more wreckage than usually, but this was shocking. Obviously very little or nothing was removed for scrap since it is such a remote spot. 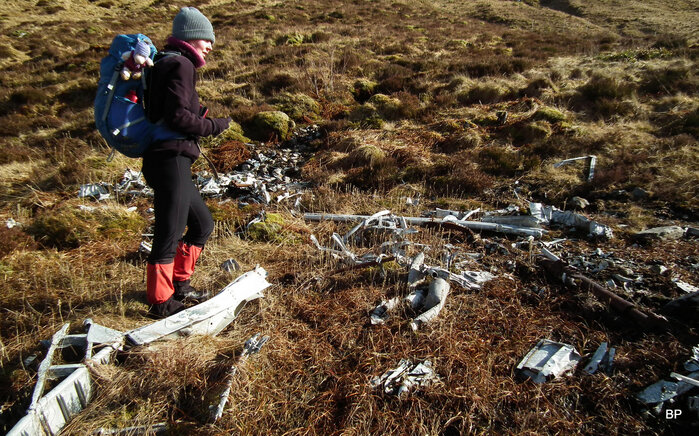 The accident happened on the night of 13 February 1942. Quoting the "aircrash bible":
"During a cross country training flight, form Lossiemouth in Moray to to the Isle of Tiree, the starboard propeller assembly separated from the aircraft. Flying on a single engine in icing conditions the aircraft became uncontrollable, and the crew baled out. The aircraft then dived into the ground on the lower slopes of Mullach Fraoch-choire in Glen Affric and was completely destroyed." More detailed account of the crash and the fate of the crew can be found on Forestry and Land Scotland webpage here:
https://forestryandland.gov.scot/learn/heritage/world-war-two?id=964
List of other links with information about the crash site:
http://www.edwardboyle.com/wreck33.html
https://www.forestry-memories.org.uk/picture/number267/
http://www.yorkshire-aircraft.co.uk/aircraft/scotland/t2707.html
https://www.peakdistrictaircrashes.co.uk/crash_sites/scotland/vickers-wellington-t2707-glen-affric/
http://www.wtdwhd.co.uk/Glen%20Affric.html
"Aircraft Wrecks: The Walker's Guide: Historic Crash Sites on the Moors and Mountains of the British Isles"
by Nick Wotherspoon, Alan Clark and Mark Sheldon
It was one of the most interesting sites we have visited so far, even if it didn't feel as poignant as some others with more tragic history. Scottish mountains are full of such hidden mysteries, just waiting for us to discover them.
...
We still had a long walk back to Affric car park, but in such fantastic scenery, who would worry about the distance?
Back on the beaten track:

I was surprised that my knee held well during this long trip. It seems that the injury is more or less gone, but I still feel unsure about jogging and try not to push it too far. Long distance walking doesn't seem to upset it any more, which is fantastic news before the coming spring/summer days!
My next TR will take us up another less known Sub'2 Marylin, where we explore forests, avoid tree felling areas and admire local views

Thanks, you never know what you might find when walking the local hills

We have a few more crash sites on our radar this year, but some of them are in Moray so it has to wait till restrictions are eased. Others are on high ground and hidden in peat hags so best to wait for all the snow to melt (and for bog to dry). I'd love to visit a Lancaster crashsite on Carn Icean Duibhe in the Monadhliath plateau, above upper River Findhorn. It is not the most remote spot but involves crossing a lot of swampy terrain and peat-hag jumping so it's better left for summer time.