We had this hill planned since autumn, thinking it would be a god shorter day, possibly a nice winter walk. But there was always something else we wanted to do first, so by the time we eventually got around to visiting Carn nam Bad, winter was long gone, at least on Sub'2000-er level. The day was windy and with a chance of showers, so we decided it would be safer to pick a lower hill rather than getting battered all over the place on a Munro summit.

The easiest way up the Cannich Marylin is from the south (Millness) up the powerline track, but this is, in our opinion, an inferior way of doing this hill, so we opted for a route from the north-east, from Strathglass. We were using an old report from Malky's blog for this walk, hoping that nothing had changed since he walked the route

Track_CARN NAM BAD 12.3KM.gpx Open full screen  NB: Walkhighlands is not responsible for the accuracy of gpx files in users posts
We couldn't find any room for parking in Mid Crochail so we drove a bit further north to Easter Crochail, where we found room for parking by a metal gate, then walked back to the nearest entrance to the forest.
The way up: The entrance gate was not padlocked, but after 10 minutes of walking up the forest track, we came across the second one. This one was locked but we found a weak spot in the fence The track is generally dry and easy to follow, but in a couple of places fallen trees block the passage, so some maneuvering is needed to negotiate the way: The gorge of Allt a'Chrais was a nice spot for a short break, there's even a bench provided, but we had a bigger fish to fry so just stopped for a few photos: 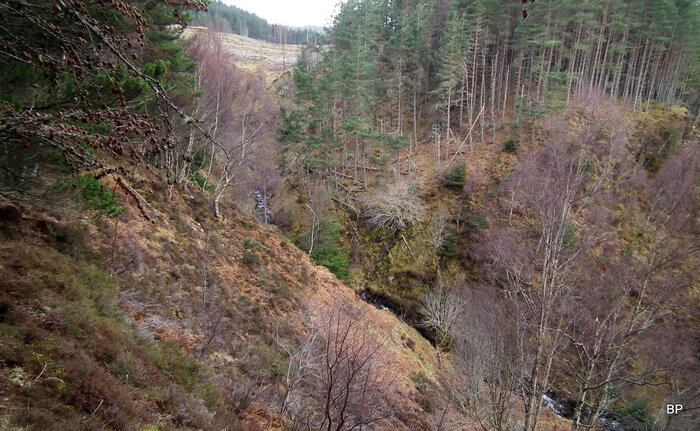 The track turns left just above the gorge, we came up to another gate (not locked this time) and soon we were out of the woods and walking up the track on the moorland:

The day was far from perfect but the cloud was patchy, at least in our area, so we could admire nice views west to Glen Affric:

It is possible to take a shortcut across the boggy moorland, straight towards the summit, but we opted to stay on the track, even of it was wet in places. Just before joining the powerline road, there was a short section through another patch of forest. No gates, but some more bog: The Beauly-Deny powerline road looks out of place up on the high ground, but at least it offers dry walking After walking the beaten track for 1km, we started looking for a suitable line of ascent. We spotted a tiny stream and followed it up, aiming for a patch of snow close to the summit ridge. The ground was rather wet and squelchy, but at least the views didn't disappoint.
Looking back to Loch Carn nam Bodan from the final climb, Carn Gorm in the background:

The last remnants of winter, a lonely patch of snow: To find the summit, we followed a line of old fenceposts to a small cairn:

Carn nam Bad might only be a Sub and not as wild and remote as our two previous walks, but views are nice enough. It would feel much better without the poweline paraphernalia though, shame it has been spoiled by the pylons and the access tracks.
Our 51st Sub'2000-er, Kevin posed with the cairn and the snow-covered higher mountains in the distance: On a good day, panoramas from the top are quite extensive, mostly to the mountains of Affric and Mullardoch area:

Back to Loch Carn nam Badan: To make a circular, we followed the natural ridge in SW direction and then dropped more steeply to the infamous powerline track.
Pylons, pylons, they are everywhere... Looking back to the summit from the powerline road: We descended on the wide beaten road for about 1km, reached a metal gate, and just past this gate we turned right onto a boggy forest track. It might look discouraging at the start, but later it improves, passing by some fenced-off, young tree plantations with nice views down to Cannich and upper Strathglass: It is possible to take a shortcut to avoid walking back on the main road, but we quickly discovered that 1. we'd have to climb over another gate (padlocked, no stile) 2. the noise of tree feeling was coming from exactly that direction, so we might find ourselves in a dangerous position. We turned back and continued on the main track, past a small lochan not marked on the map (it looks artificial), before turning right on the next junction and climbing two more gates (both with stiles, thankfully!). Overall, it was easy walking, no fallen trees or big boggy sections: The forest on the western side of Carn nam Bad is mostly mixed woodland, plenty of birch trees, would be a nice spot for mushroom picking in autumn months. At the moment though, one has to be very careful when walking here because of the extensive tree feeling.
Heading for the last stile: Back on the tarmac, it was only a short walk back to the car, the whole circuit taking just under 4.5 hours, but we didn't rush it, days are getting longer now so no need to chase the sunset.

Maybe not a big undertaking, but a good circular. If only the upper parts of Carn nam Bad weren't spoiled by the Beauly-Deny powerline...
The following day was forecast to be nice, warm, sunny and dry with moderate winds, so we re-visited another local Affric Graham. It was our 3rd time on that hill and each time we used a different route. We are probably the only people who tried all three approaches as this particular Graham is not regarded as very interesting. So my next TR will be about fantastic views, but also about more powerlines, access tracks and... yes, you guessed, wind turbines. Watch this space!

Good to see that most of that route is still walkable

. I thought that the powerline works might have taken some sections of it out. Annoyingly the original Beauly-Denny line went along the bottom of Strathglass, but it got moved up onto the moorland with the upgrade to make it less visible. I suppose most people don't go up there, so it works for them

malky_c wrote:Good to see that most of that route is still walkable

. I thought that the powerline works might have taken some sections of it out. Annoyingly the original Beauly-Denny line went along the bottom of Strathglass, but it got moved up onto the moorland with the upgrade to make it less visible. I suppose most people don't go up there, so it works for them

We owe you a pint for using lots of your routes

This one is not really suitable for winter (getting over all those fallen trees and locked gates) but definitely better than the most often used easy walk up the powerline track.

On Good Friday we "stole" another one of your old routes, the circuit of Càrn nan Gobhar above Loch Mullardoch. Fantastic ridge, thanks again for the idea

BlackPanther wrote: We were using an old report from Malky's blog for this walk, hoping that nothing had changed since he walked the route

This is not usually a good idea

You seem to have escaped largely unscathed on this occasion