The burning summer spell from mid June to mid July was now behind us and the weather was now turning to the standard Scottish "summer".

I had just flown in from Finland this morning and drove from Edinburgh airport. My start time was now 13:00 but I reckoned I had plenty time for a 15km loop and 2 Munros. I had chosen these two from the Crianlarich hills as they suited my logistics for the rest of the week (Ben Lui 4 tomorrow) and I had done the east 4 from Crianlarich last year, so it seemed sensible to chalk off some more from this range.

The massive car park made parking easy and due to my late start, there were only park cars and no-one around. I put my boots on, packed my day bag and headed down under the railway. Following the new clear path until I picked up the full track toward the damn, the going was very easy and I realised I was walking quite quickly over the prepared road. Looking back to the hydro-track leading to the damn

As directed in the WH route, I headed off the track after the first gate where I could see a faint path heading across the open hillside. I started to head fairly straight and fairly steeply toward the first target, Sron Gharbh. After leaving the track, this is around 450m of ascent with respite. Having said that, it didn't feel too bad. Knowing this was the major part of the uphill for the day out of the way made it easier to focus. After reaching the 709m mark, the walk along Twistin Hill is quite pleasant and a nice gradient, gaining height without the steep climb.

The castle can now be seen in the distance but the true summit lies a little further on. Approaching the rocky outcrop, there is a small hands-on part to the left of centre or (I believe) a by-pass to the right. The scramble was nothing much, no exposure or difficult moves.

I met a few people at this point coming in the opposite direction. they seemed to be having a great day (and why wouldn't they Looking back along the ascent with Tyndrum hills in the background

Looking around it was possible to see most of the rest of the Crianlarich hills at this point. Only Beinn Tulachean being partially hidden from view. The summit of An Caisteal was quite flat at the top and you can get a good view of the two Munros behind. 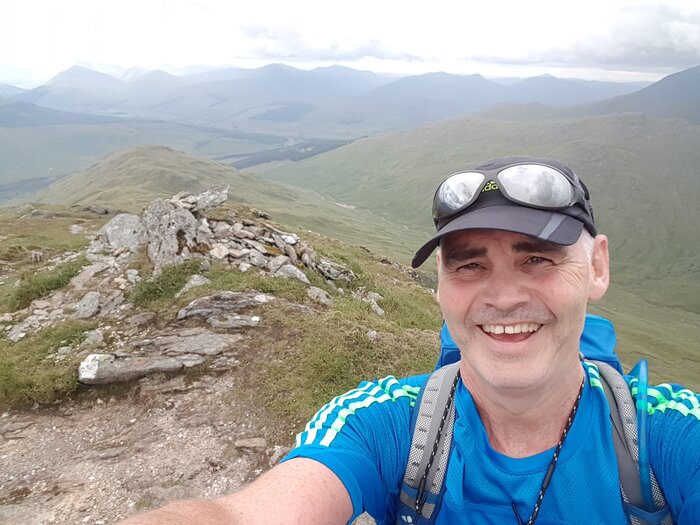 Me at An Caisteal summit and Tyndrum behind

My next target was Beinn a'Chroin and the path down and re-ascent from the bealach was pretty clear. You have to be careful with your footing in several places on the descent but all in all it was fairly easy with no scrambling required. Looking over at Beinn Chabhair, I was glad I did not attempt the 3 together. The ascent of Chabhair from this side looks quite intimidating for gradient and also terrain. An up-and-down and back to Beinn a'Chroin would just have been too much for my 13:00 start. 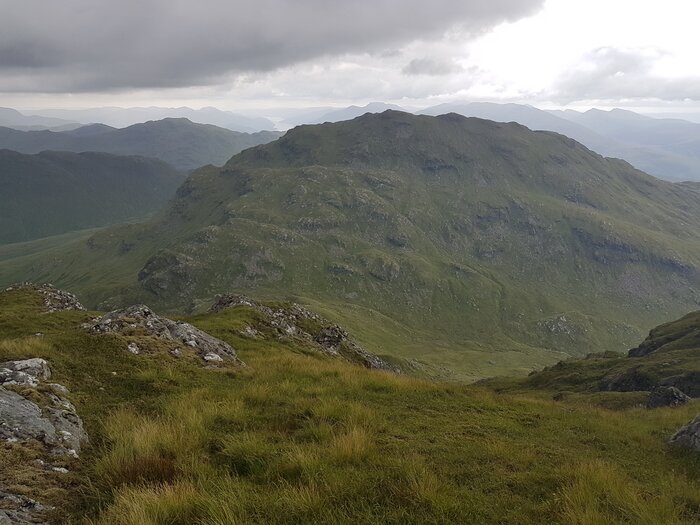 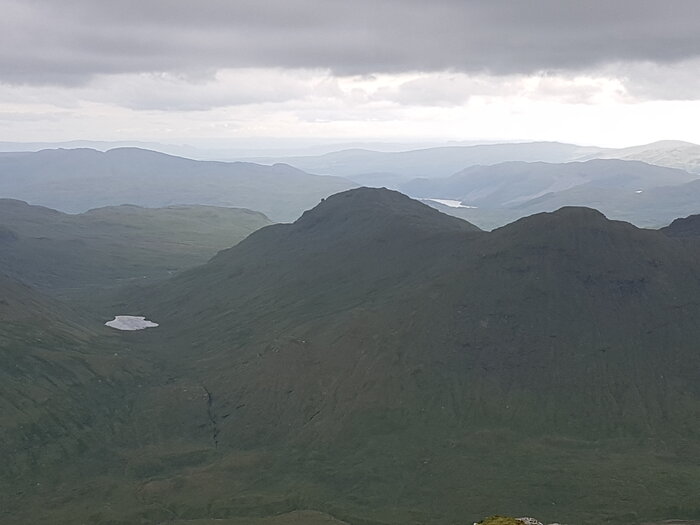 The path up to Beinn a'Chroin summit plateau was a little different than what I expected. For me, scrambling is anything requiring hands-on. I don't count walking along a boulderfield, like CMD arete as scrambling really.

I was surprised to find there was a point in the ascent to Beinn a'Chroin that required not only hands on but most me to stretch my old legs to get a knee-hold to pull myself up. It was not super hard but it was just unexpected and might catch some people out with shorter reach than me. The path before the scrambly part 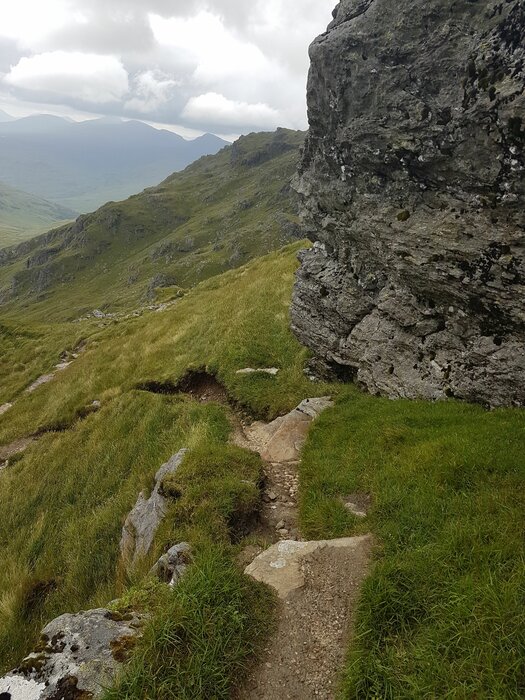 I touched all 3 and I reckon the east summit looked the highest but I think they are all within a meter of each other anyhow.

The summit area is nice and would provide easy wild-camping on a nice night. One of Beinn a'Chroin's summits

After this, the path back to the hydro track looked pretty clear in the good visibility. So I set off at a brisk pace down from Beinn a'Chroin off Stob Glas Bheag and then toward the Coire Earb. This is famous for a reason. Although it was a summer's day and the weather had been favourable for week's, this place is a bog-fest. It took longer then expected and since I was awake at 03:00 I was beginning to run out power. The trudge was a rather unfortunate end to a nice day. It seemed to go on for ever but in reality it was probably only about 2.5km. Sometimes the path disappeared in the mud but could be found 50m further down.

Eventually it eased before hitting the end of the hydro track and the dam. From there it was an easy walk of about 3km back to the car park.

All in all a great day, leaving only Beinn Chabhair for me in the Crianlarich 7. I have heard the bog is not any better there either

An Casteal_Actual.gpx Open full screen  NB: Walkhighlands is not responsible for the accuracy of gpx files in users posts