We had fantastic time on Carn nan Gobhar on Good Friday, despite high cloud and occasional gusts of wind. The next morning, weather was superb, with blue sky inviting us to visit another hill. I was hoping for Tom a' Choinich and Toll Creagach in Glen Affric but since they looked still in full winter conditions, I was worried Kevin might not be up for the challenge. He was feeling a bit weak after the covid vaccine (I was told this is not uncommon and should pass after several days) so we ended up climbing a much easier Munro, Fionn Bheinn. This mountain is really just a half-day walk, we took time to enjoy ourselves, take photos and even drink tea on the edge of the cliffs.
Our route was the usual circular walk from Achnasheen. If you fancy a more challenging day, Fion Bheinn can be combined with its sidekick Graham, Meall a'Chaorainn.

Track_FIONN BHEINN 12.5KM.gpx Open full screen  NB: Walkhighlands is not responsible for the accuracy of gpx files in users posts
We were welcomed by one curious local: The climb is straightforward, though the path is a bit vague higher up, some peat hags to jump over, generally easy going. I was surprised that despite Kevin's post-vaccine weakness, we were still overtaking other walkers on the way up. We're not as slow as we think

Fionn Bheinn from the flatter section near the hydro dam:

Meall a'Chaorainn. I know there is a good route to climb the Graham alone (from the east) and we will do it some time, maybe next winter as a Christmas treat. Back to the Munro, not much to say about the rest of the ascent. If you are fit, you could march up the grassy slopes in less than two hours. We took a bit longer, but mostly because we stopped too many times for photos. Even the lower reaches of this hill offer superb vistas on a good day. Today, there was some mist in the air, like a partial haze only covering the lower parts of the landscape. Reminded me a bit of cloud inversion (which we had once seen from Fionn Bheinn a few years ago). Below, a few examples.
Strathconon Corbetts (Sgurr a'Mhuilinn and Meallan nan Uan):

Having reached the edge of the cliffs some 50m below the summit, we wandered around for a while, no reason to be in a hurry. I posed with the last patch of snow, not knowing that only a few days later, the hills would be all white again! 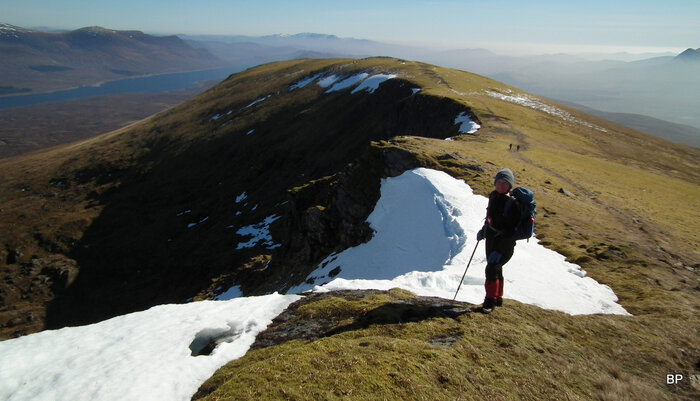 Kevin heading for the summit: Many people call this Munro pointless, but I don't really understand why. It's such a great viewpoint that I could forgive it the lack of any interesting features...

Beinn Eighe and Liathach waiting for us to re-visit in the summer:

Gobsmacked and speechless, a rare occurrence in case of Panther:

The summit area was windier than we expected, so after a quick photo session we descended a bit and found a sheltered spot along the cliffs, where we could sit for a few minutes and have a sip of tea.
Lucy's second visit to Fionn Bheinn: To vary the descent, we followed the eastern ridge, gradually descending along the rim of Toll Mor corrie:

Mad cat on the hills:

The wide shoulder of Sail an Tuim Bhain offers a nice alternative to retracing your own steps down to Achnasheen and these days most walkers descend this way:

Loch Fannich and the mountains beyond:

We reached the old stone dyke, here we could simply follow it down to where it joins a well worn stalkers path, but Kevin had other ideas, he suggested maybe we could stay here a bit? We were off the wind and the day was so lovely, it would be a sin not to enjoy the views for longer! We walked along the cliffs for a short distance and found a good spot to sit down and sip more tea, this time accompanied by hot cross buns. It was Easter Saturday after all... Time to go home... If you can still walk after all the buns you've consumed Descending to the main road past Achnasheen Plantation: Fionn Bheinn is probably one of the busiest local hills these days - not too far from Inverness and a relatively easy route, but it is always a nice experience, especially if you can't risk a bigger walk. Highly recommended

Thankfully, Kevin recovered quickly from his post-vaccine fatigue and the following weekend we could plan another longer walk. Surprisingly, winter came back with a vengeance, so we picked a lower hill, but the views we got from it were second to none. TR to follow.