Today was the first day of being allowed out to the hills after several months of Covid lockdown restrictions. I tried to make the most of it by seeking out a decent day's walking, with lots of summits that I haven't been to before. I was also trying to avoid the more popular places, as people head to the hills again, and as a result I did not see a single person all day long.

There are not many places where you can tick off 5 Corbetts in one day. These steep, grassy hills near Tyndrum are a compact group but there is a fair amount of ascending and descending involved to get around them all. I started at the car park on the right hand side of the A82 just 2 miles north of Tyndrum. Passing under the cattle-creep just north of here I headed SE up the grassy slope of Beinn Odhar to the southern ridge, then straight up to the summit passing a small lochan that was teaming with frogs today.

From here I headed SE towards another small lochan and then largely followed the path of the low wooden stumps of a disused, strangely small, electric fence line. These lead you down the steep slope of Beinn Odhar, then up the steeper slope to the summit ridge of Beinn Chaorach, a bit of a slog to be honest. A cylindrical OS trig point marks the highest point.

Enjoy the gentler descent to the bealach between Beinn Chaorach and Cam Chreag. You are lead to the top by the short wooden fence stumps as your way sweeps up the broad slope of this lumpy ridge. From the summit cairn here enjoy the views NW towards Loch Lyon. My legs were feeling a bit wobbly now and heading down the long NNW ridge towards Beinn nam Fuaran the last two hills on my walk looked deceptively close to each other, but the descent and ascent between them was harder work than it looked.

Beinn nam Fuaran's summit lies straight up another long, steep, grassy slope, and the descent into the bealach between it and Beinn a' Chaisteal was steep also, though always easily navigable. One further line of wooden fence posts mark the way to the top of Beinn a' Chaisteal where the views to Beinn Dorain were glorious. the crumbling cliffs to the SW of the summit prevent a quick descent and a path SE along the top of the ridge leads to the klast steep, grassy descent of the day and a track that leads under a railway bridge and joins the West Highland Way to take you back to the car park.

My feet felt bruised and sore at this point, as by now I had ascended and descended over 1.5x the height of Ben Nevis. So as there was nobody else on these hills today I enjoyed a quick dip in a crystal clear pool of the wee river as it passed under the railway bridge and headed back to my car with a spring in my step. Somewhere to cool down after that walk 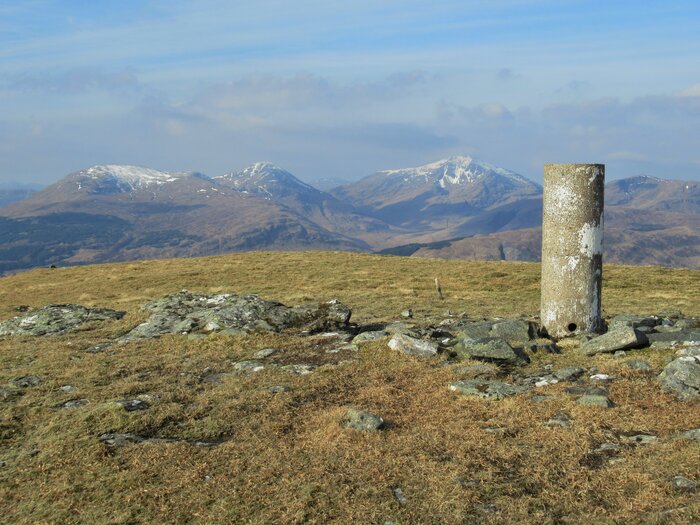 
Hike_5_Tyndrum_Corbetts.gpx Open full screen  NB: Walkhighlands is not responsible for the accuracy of gpx files in users posts

This is a route I hope to do in the next couple of years so it was good to read another report on it. Now that you have done it, do you think it makes any difference which order you do the hills in??

There's a definite circle you can picture of the ridge from one hill pointing to the ridge of the next one, but I don't think clockwise or anticlockwise would make any real difference. It is pretty unrelenting though. You are going either straight up or straight down all day, whatever way you go around them.

Gordie12 wrote:This is a route I hope to do in the next couple of years so it was good to read another report on it. Now that you have done it, do you think it makes any difference which order you do the hills in??