I did Carn Mhic an Toisich about 3 years ago from Blaraidh, but it was a cold, wet, sleety cloudy day from what I remember, and not a day where I'd felt any desire to extend the walk to the nearby graham of Meall a'Chrathaich. Today couldn't have been more different - a nice sunny day with good visibility and just a very light breeze. I was driving home to Inverness from working in Fort Augustus at the weekend and overnight, so this was just a small detour down Glen Moriston to the start point at Bhlaraidh on the A887.

The first part of the walk was the same I did for Carn Mhic an Toisich, taking the good track up past a handful of houses, then through woodland alongside Allt Bhlaraidh. The track then joined the bigger windfarm track, continuing up the hill. Where the windfarm track continued up to the right at a junction (where there's a Glen Moriston Estate board with a schematic map of the hydro schemes), I turned left, following the hydro track up past Bhlaraidh reservoir and dam and onwards to the dam at Loch Liath. This is where I'd headed left across boggy ground to the other graham previously, but today's target was right, across the burn. Recent snowfall followed by the current milder days meant this burn like all others in the area was pretty frisky with snow melt. I didn't fancy walking across the ford, so went right up to the dam where I was able to cross on grassy ground above the gushing outfall pipe and up the slope on the other side to re-join the track, safe and dry. 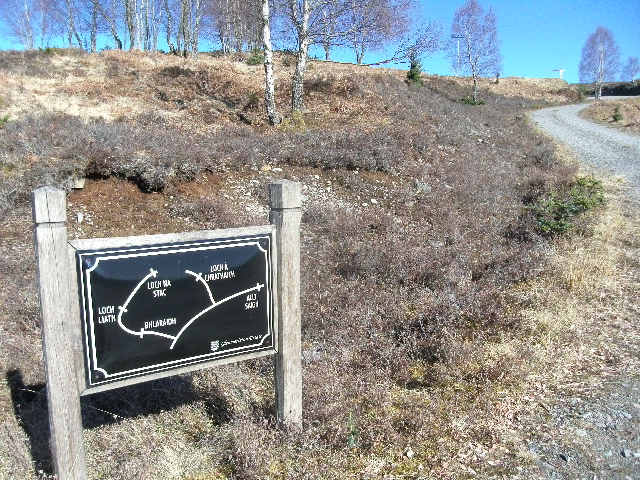 Bhlaraidh dam with a windfarm backdrop. No getting away from renewable electricity generation sources on this walk! My target hill was in sight ... ...but I was still walking up the hydro track on the west side of the river so would need to get back across it at some point. The track crosses at a ford, but the water was flowing pretty fast today and so I headed a little further upstream to the Loch Liath dam The outflow ...fortunately there's an easy way to avoid it, crossing just above here! The Bhlaraidh Wind Farm dominates the southern slopes of Meall a Chrathaich, though as my OS map pre-dates it, I didn't know where the tracks for it went or if they joined up with hydro track I was on. Rather than continue walking up to Loch ma Stac (which, if I had, I'd have found a linking track between the hydro and wind farm tracks) I just headed straight over the boggy ground towards the wind turbines (because it wouldn't be a graham without heading over boggy ground..

). I came on to the track between turbines and decided it was heading in roughly the right direction, so stuck to it. It was only when I reached the end of that section of track, had a hill directly in front of me and got out my map to check what top or bump it would be and how much further the main summit would be behind it, that I realised the track had taken me right to the final slope of Meall a Chrathaich itself. Back on the hydro track for a very short distance, looking west over Loch Liath to the other graham nearby, Carn Mhic an Toisich Crossed some boggy ground and then got on a windfarm track. Followed it up past some wind turbines in what looked like the right direction and got to the end point on this spur. Didn't realise until I got my map out that Meall a Chrathaich was that peak right in front of me.

The next part of the walk was the nicest, heading over the (inevitably peat hagged and boggy!) ground towards a lower part of the ridge, then following the dry, easy ridge all the way up to the summit trig point. It was one of those lovely calm days where I could get the maps out and have a look around for a few minutes, identifying the mountains around. A useful view too, as I had the next 2 days off and it was good to see what snow conditions were like after the new snow in the last week; things were certainly whiter than the previous weekend when I'd been up a corbett in Glen Affric. I decided to stick to grahams for the next 2 days too to save digging out my winter gear! At the summit and looking down on to Loch a'Chrathaich 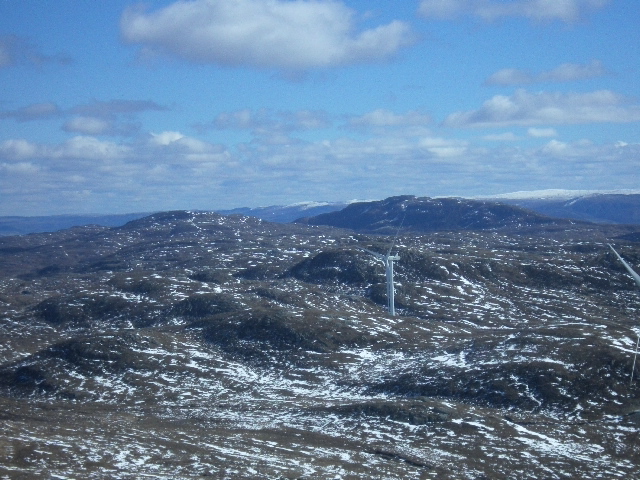 East to the grahams Glas Bheinn Mhor and Meall Fuar-mhonaidh 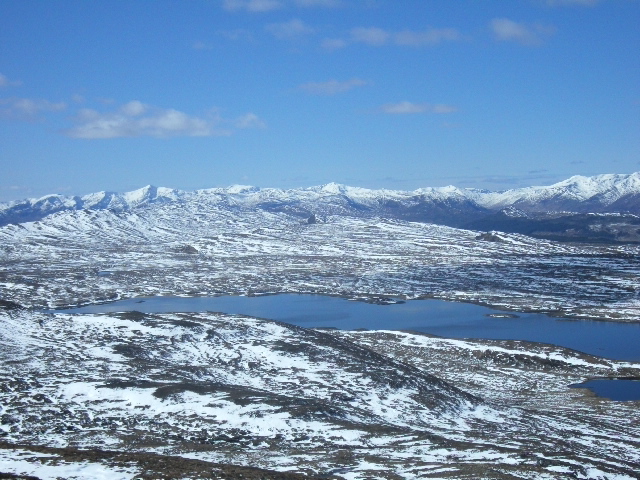 West over Loch ma Stac to Glenshiel, and Affric on the right

Rather than head back the same way I thought I'd head down the other side of the hill and round Loch a'Chrathaich. A quick look over the side quickly revealed heading directly down wasn't sensible given the steepness, so I headed north east down the slope, then east across the north end of the loch, before getting on to the start of a windfarm track. From there, I just stayed on the track all the way down to re-join my outward route. Descent down the other side, so this looking back at the eastern side of Meall a Chrathaich


our_route.gpx Open full screen  NB: Walkhighlands is not responsible for the accuracy of gpx files in users posts
Despite the walk through the wind farm, it actually wasn't a bad route this, I enjoyed the walk, first of a hat trick of new grahams in 3 days