This was my first trip back into the hills since Ben Vane, the Callander Corbett, in August 2020. Since then, another covid lockdown, and a hernia diagnosis that had left me unsure of taking on strenuous exercise, had put a lid on mountain activities. However a work trip to a site at Drumbeg and an overnight stay in Lochinver proved too good an opportunity to miss.

I set off on the Thursday afternoon from Banchory in sunshine, breaking up the 5 hour journey with a drive-thru at Inverness. I had a shot of the newly-discovered hyperlapse function on my phone, which records a video as if you're driving at 300mph, on the journey past a snow-covered Ben Wyvis and Loch Glascarnoch – handsfree of course! 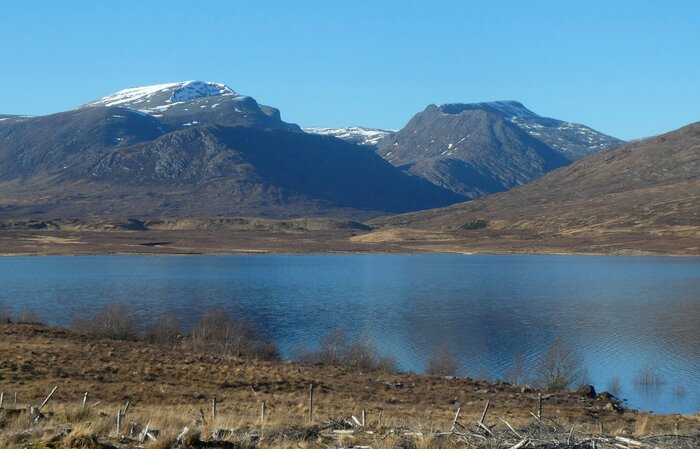 Beinn Dearg above Loch Glascarnoch on the drive up 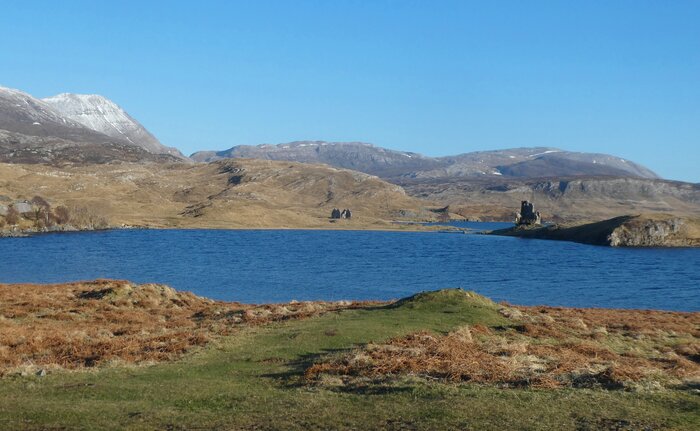 Conival from the road to Lochinver

Accommodation for the evening was the Tarradh Guest House on the south shore of Lochinver, from where my bedroom window offered stunning views of Suilven, tinted orange in late evening sunshine. It hadn't crossed my mind to take on Assynt's most iconic peak, however the land lady enthused about her own ascents, as well as the benefits of daily wild-swimming in the sea - the former appealed far more than the latter! A short drive along the narrow road to Achmelvich and a wander up a hillside provided a box seat to watch the sun disappear behind Tiumpan Head lighthouse on Lewis, 30 miles away. 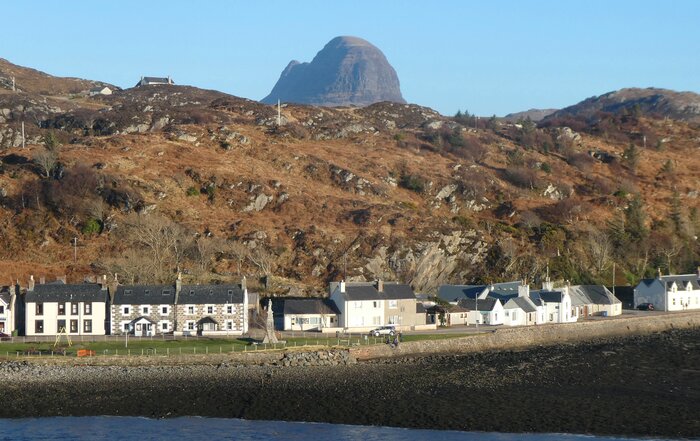 Suilven, as seen from my bedroom window! 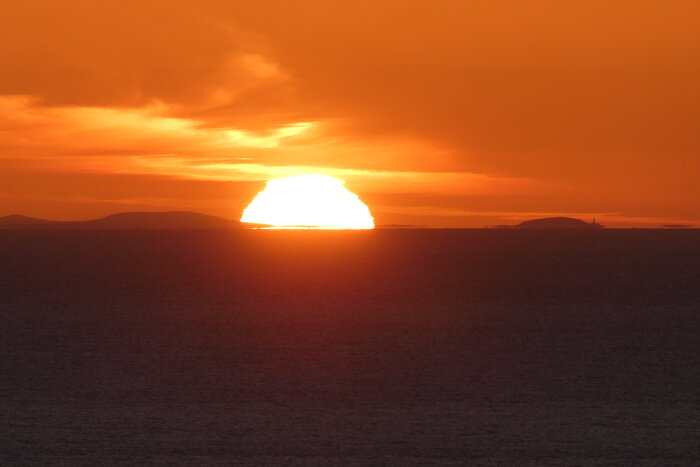 After a 6am start and early breakfast, I was off to survey a plot for a new build at Drumbeg, perched amongst woodland high above the bay. The job went well and by 11:30 am I was heading back to Lochinver, my initial thoughts of a modest target being overtaken by a shot at Assynt's crown jewel. I checked on the route whilst devouring a sausage roll from the local Spar shop. Having nothing to rush home for given it was a Friday evening, time for once was my servant rather than a master, and so my mind was set – a short drive along the road to Glencanisp Lodge and I was on my way, just after 1pm. My first proper exercise in months, I set off with questions in my mind for sure, but the six mile walk-in would be an ample testing ground before the real climbing began. Cloudy skies over Suilven on the approach track

A kilometer of tarred road led into the trees around Glencanisp Lodge, before a rougher track climbed from the still waters of Loch Druim Suardalain – a name based on the norse for sward land – into wilder climes more typical of Assynt. The winding course of the Abhainn Bad na h-Achlaise – which translates as river of the armpit – was a regular companion. A later google search would reveal a whisky that carries the same name, not an appetising prospect for fluent gaelic speakers! The lime greens of spring had not appeared yet, and below grey skies the landscape was barren. A track branched off to Suileag bothy, hidden from view, but I continued onwards as mist-swathed the summit of near-by Canisp. Suilven’s pillar outline transitioned as the miles passed to an elongated, serrated ridge. A well-constructed path eventually branched off between quiet lochans to the base of the ascent slope, which breaches the crag-terraced flanks at the lowest point between the west and east summits. I passed a couple who were descending and, given the paucity of vehicles in the car park, became fairly sure I now had the mountain to myself. 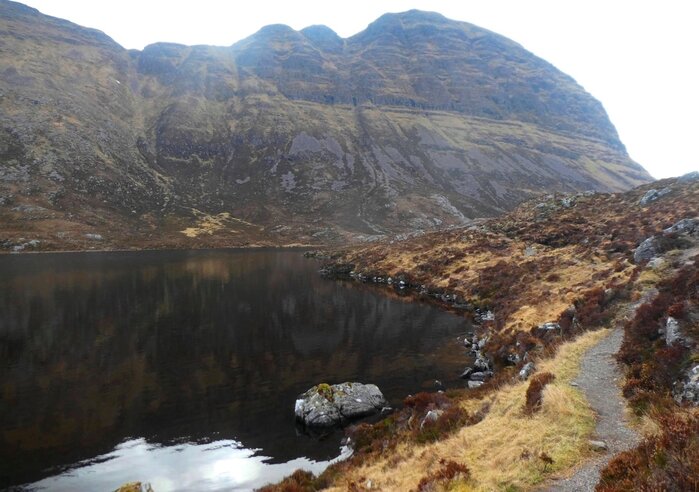 The path approaches the ascent slope to the bealach, visible to the left of centre.

A renovated path, akin to a staircase at points, tamed the steep slope in zigzags and after less than 30 minutes brought me to a sudden reveal of the stunning southern panorama of mountain and loch. The highest point, Caisteal Liath (Grey Castle) at 731m, lay westwards, but the lower and sharper eastern summit of Meall Meadhonach (723m) beckoned first. A notoriously tricky scramble was a prospect I may not relish later, so in ideally still conditions I decided to go for it.

I left the trekking poles at the col - they can be a real pest when manoeuvring over tricky scrambling sections - and headed eastwards, following a clear path that was soon dissecting a narrow ridge crest. I refused to study the details of the final summit pyramid as it loomed ahead - whatever faced me would look more difficult head-on, and my confidence and fragile head for heights was best retained for closer combat! 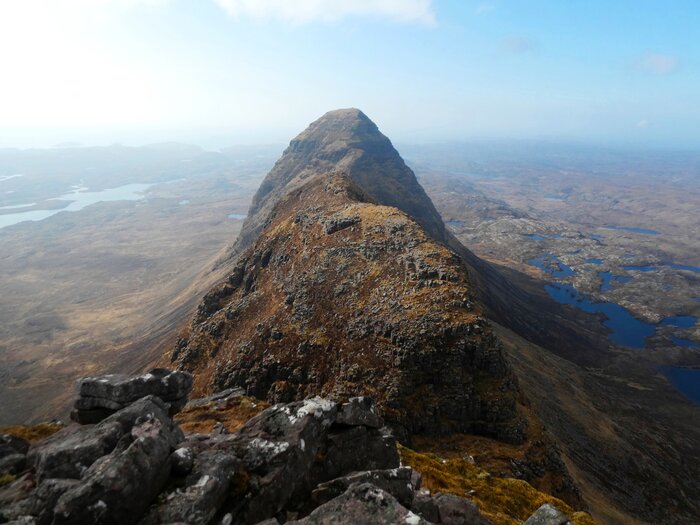 Looking to the highest point of Suilven, Caisteal Liath, from Meall Mheadhonach as the sun strengthens

A sharp drop down a couple of scrambly steps led to a narrow notch in the ridge, only a yard wide, at the base of the final summit tower. From here a steep re-ascent, the path meandering through rock steps, led towards the south side of the ridge, leading to the final crags that guarded the very top. Exposure increased considerably, with hands required for a careful traverse across ledges, following the worn route before an impasse was reached. Some near vertical moves were now required. I tip-toed up carefully before footholds appeared to run out and I had to hoist my entire weight up on to a ledge using a big right hand-hold. The gaping drops below, or the consequences of a fall, never entered my mind - the task would be rendered impossible if they did! This hoisting move would have to be repeated, so I carefully tested lowering myself down, as I would need to do in descent, before advancing onto easier ground and the surprisingly grassy summit. 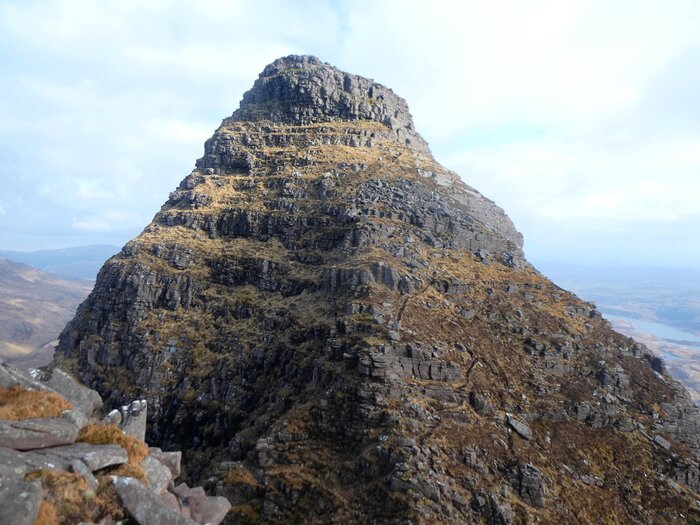 The final rocky summit of Meall Mheadhonach. The path reached the crags at the very top, before skirting round to the right for the crux. 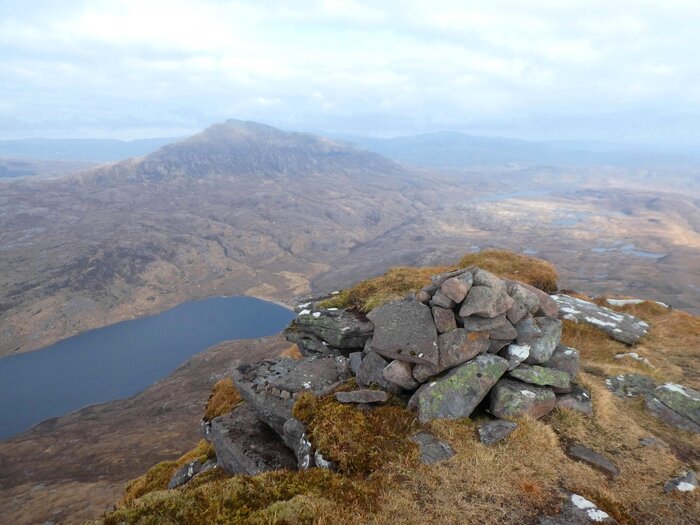 My natural disclination for exposed scrambling overcome again, I let out a cheer of delight as the modest cairn came into view. It was now almost 5pm, and with a haze still obscuring distant views I didn’t hang around long before returning to the awkward descent. A series of careful, outward-facing lowerings made the exposure harder to ignore, but the crux down-climb ledge-drop went fine and the relief of easier ground came with the day’s toughest difficulties now behind me.

I was rewarded with the sun breaking through to illuminate the rocky skyway that led to the highest top, an enjoyably narrow and scrambly path. Constantly the attention and camera lens was drawn back to the soaring symmetry of Meall Meadhonach, with the absurdly-located stone dyke that crosses the ridge an intriguing foreground. An eagle caught my eye, soaring overhead, further enhancing the grandeur of the situation. 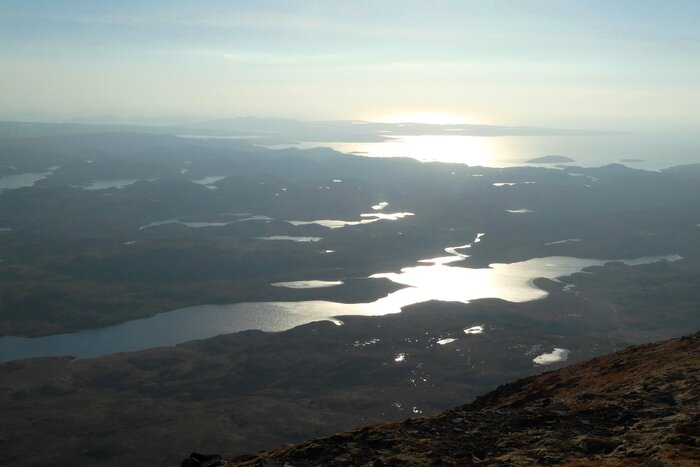 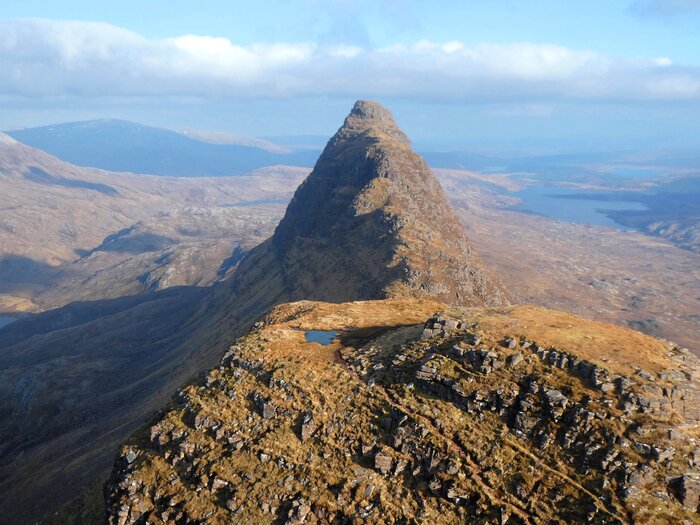 Sunshine and blue sky now reigned over the surrounding monolithic Assynt peaks. At 6pm the highest point, Caisteal Liath – the grey castle – was reached, opening up the view westwards of a jumble of knolls and lochans leading to the sea. I managed some good video footage of the eagle, which would later allow it’s identification as an immature white-tailed or sea eagle. 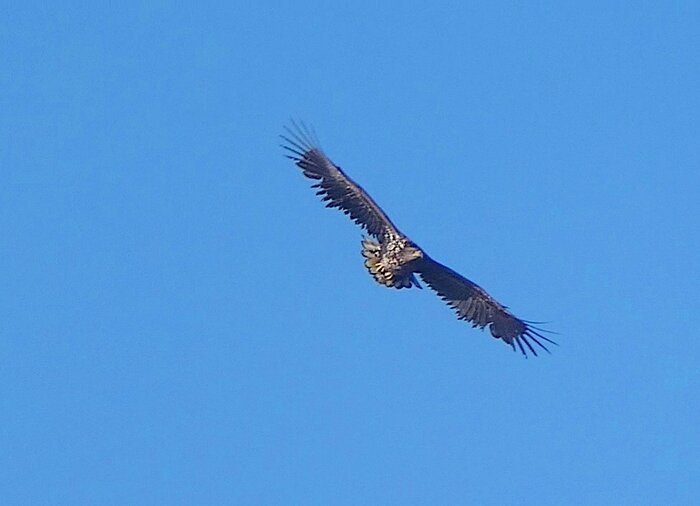 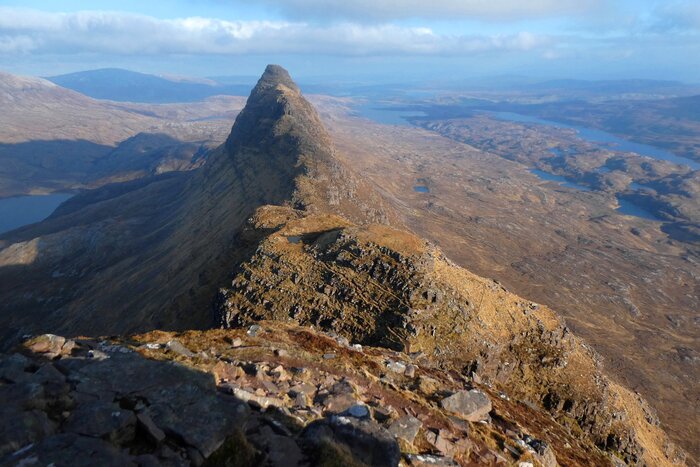 After 15 minutes I set off in high spirits, the stunning east summit now illuminated by magic hour sunshine. I left the col at 6:30pm and, after only 20 minutes shaded from the warm evening rays, I was relieved to reach the easier gradient of the path below. 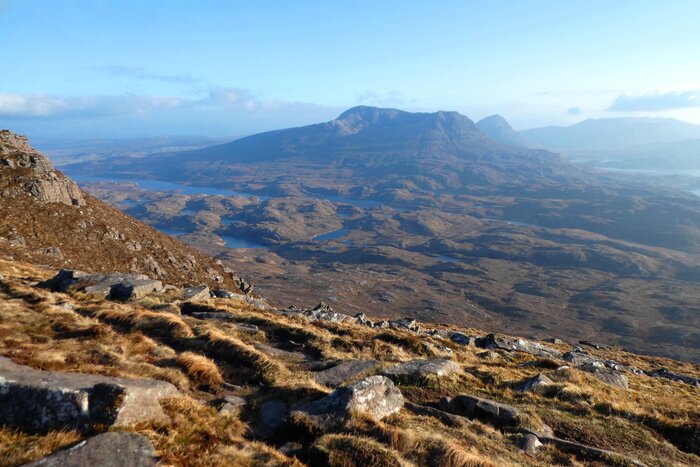 Cul Mor from the ridge Beginning the descent from the ridge, looking northwards to Quinag Looking back up to Meall Mheadhonach Leaving the bridge at 19:15, I barely paused on the march homewards towards the setting sun, trekking poles now shortened and swinging either side to aid stride rhythm. The 6 mile trek felt a little strained – perhaps I had been protecting my hernia area and over-compensating on the muscles on the other side. Under a clear sky a veil of mist was now being drawn over Suilven. The sun had set by the time I reached the woods beside Glencanisp Lodge and elation was the overriding emotion when I reached the van at 20:20 – 4 miles rattled off in not much than an hour. A veil of mist envelops Suilven at sunset Almost home - back at the car A 5 hour drive home awaited me but the buzz of this superb mountain day would linger for a lot longer. Besides a very close shave with a deer at 50 mph, and a stop in Inverness for a caffeine drink and drive-thru, I'd make it back to Banchory a good bit after 1am. A late finish but thoroughly worth it after a memorable day.

I think I need to plan another trip to Assynt - that looked brilliant.

Hope all goes well with the hernia.

Fab photos , feel the pull of the Assynt area again

I’m too afraid to do that route, but thanks for sharing your experiences and confirming that it’s beyond my comfort zone

That’s fab- great photos too. I didn’t do the scrambly summit..... and I biked in to the bottom to save walking all those miles. That looks like a spectacular day!