Living within Stirlingshire, I have been fortunate to have a wide range of walks and hills to keep me occupied during lockdown. I have been yearning for a multi-day trip into the wilderness for a long time and the Affric Kintail way seemed to fit the bill for the 4 days we had off work.

Day 1 Drumnadrochit to Cannich: 21.5km / 13.25 miles - time taken 4hrs 20 mins
It was a very early start driving up to Morvich in the morning and we parked at the NTS for Scotland Countryside Centre before walking back to the bus stop to await the bus which arrived on time just before 10:30. There are only two buses a day to Drumnadrochit, so it's advisable to book before-hand.

We walked along to the tourist information centre in Drumnadrochit and commenced our walk. Some initial climbing of hills and the changeable weather had us changing in and out of our waterproofs a number of times. The early sections were mainly through trees and often you had great views down across Glen Urquhart. Eventually we reached the A831 and this was the part of the walk we were not looking forward to. It was 7km along the main road to Cannich, but it really wasn't too bad as traffic was fairly light and we made quick time on the final stage of our initial day. We arrived in Cannich around 4:30pm and checked into the wigwams at the campsite. 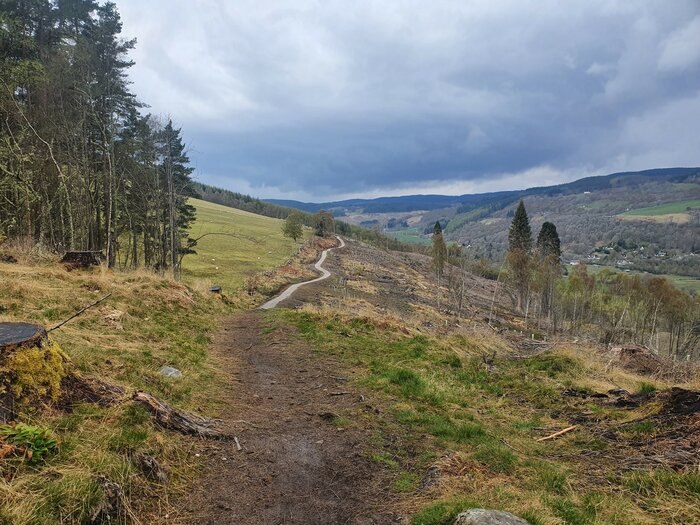 Looking down on Glen Urquart

The café on the campsite was shut and the pub only appears to be open at weekends. We were happy to head to the Spar for some beers and supplies. There was a sign 'Chips for £1-50' - as this was the only hot food going we decided to chance it. They were amazing- freshly made, hand-cut and were very much what was needed after a long days walking.

Day 2: Cannich to half-way along Loch Affric 24.87km/ 15.45 miles - time taken 5hrs 13 mins
After a great sleep we climbed the hill above Cannich and ground out the k's in the forest in the rain over the undulating hills. Easy navigation as we were just walking on the forestry commission landrover tracks. About 7.5km into the walk we took a turn to the left and descended down towards Dog Falls- note there are toilets here if required. From Dog Falls we climbed up into the forest which took us through the pinewood trees. We eventually seen a sign to the right of the path which took us up to the Glen Affric Viewpoint. 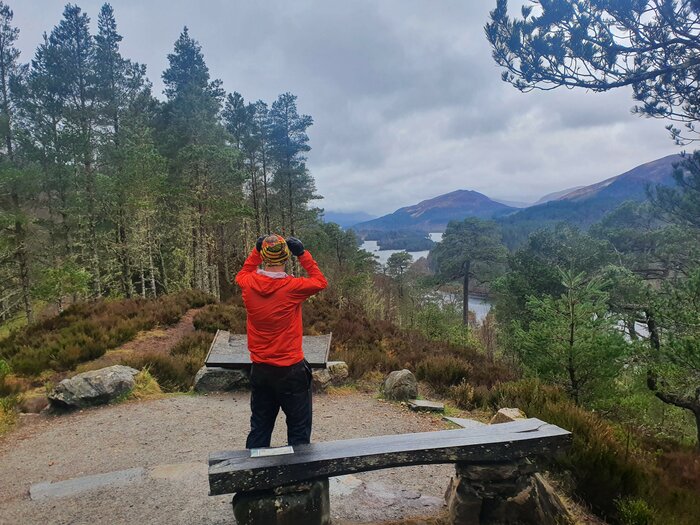 From the viewpoint we continued the walk through the trees on the south-side of the loch in the rain. This section seemed to drag on a bit as we focused on reaching the end of Loch Beinn a' Mheadhoin which marks the end of day 2 as per Walk Highlands. We decided to continue down alongside Loch Affric and look for somewhere to camp - we found a nice spot around 3-4km further down the track to settle down for the night. 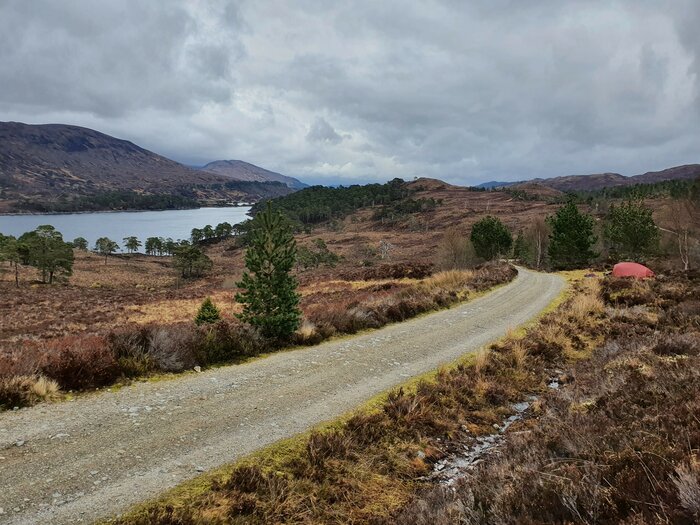 Our campsite above loch affric

After a few drams we fell off to sleep - it was quite cold during the night and ended up having to sleep with the buff over my face to keep me warm.

Day 3 half-way along Loch Affric to Canban Bothy: 13.82km/ 8.58miles- time taken 3hrs 21mins
We both very much enjoyed the walk up until this point, but it then went up to another level in terms of scenery from this point on. The weather had improved from the previous day and we enjoyed walking in the morning sun with the birds chirping around us. As we neared the end of Loch Affric the views across the loch to the mountains of Càrn Eige and Mam Sodhail were most impressive. 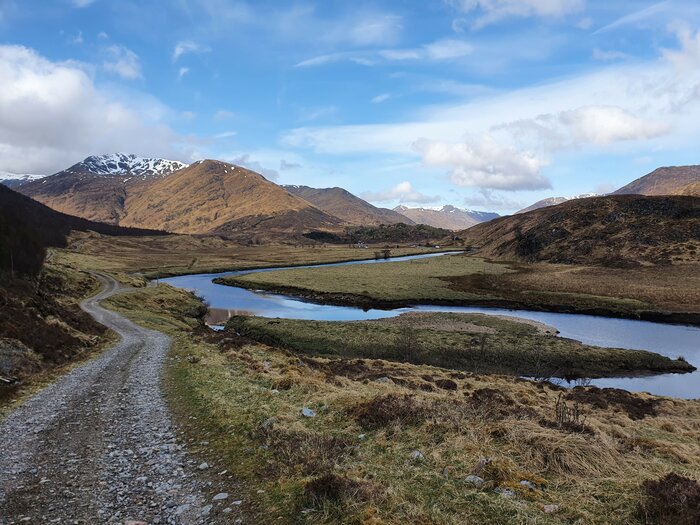 After passing some cottages and huts we continued to walk up-river, regularly stopping to take in the views. We soon encountered the first deer carcus next to the path- initially didn't think much of it but as we continued we must have seen around 20 dead deer in various states of decay at different parts of the glen. No idea why there were so many dead deer- it was very eerie and from then on I made sure to boil all water I drank from the streams.

We eventually reached the Alltbeithe youth hostel which was closed, but provided a nice spot to have some salami and Babybel wraps for lunch. It's an amazing location for a youth hostel and one we will look to visit once it re-opens again. After lunch we continued South-West up the glen towards Canban bothy. 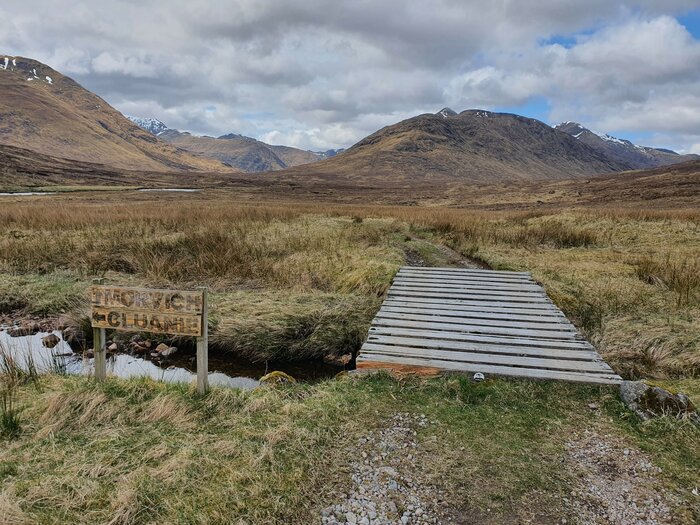 Straight on towards Canban bothy

We arrived at the bothy early afternoon and once we pitched our tent up, we kicked back, relaxed and took in the amazing scenery that surrounded us. 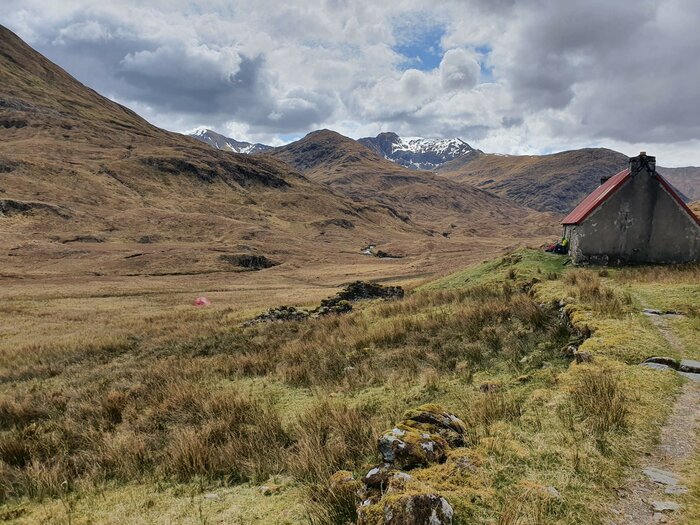 As the afternoon went on the weather changed and the hail and the rain came down and the temperature dropped a few degrees as a new front came in. 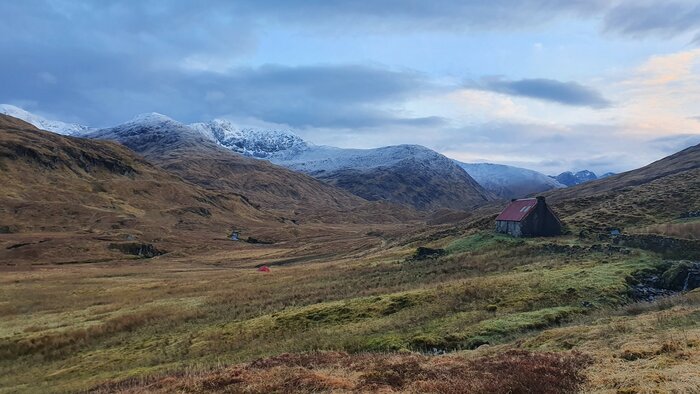 As I settled down for bed, I realised that my sleeping bag wouldn't be enough to keep me warm so I had to use an additional thermal liner. 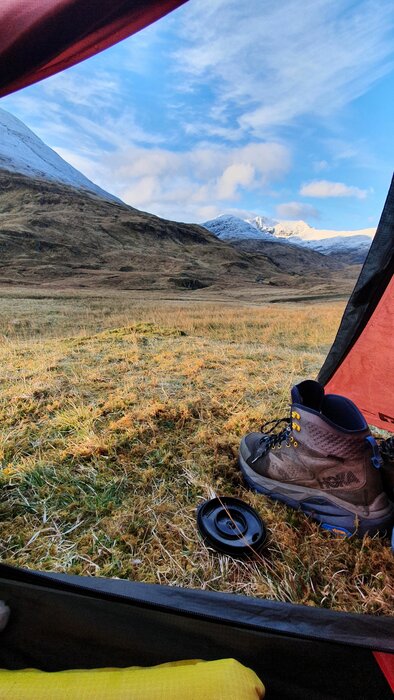 View from the tent in the morning

We woke up with ice on the tent and encountered a beautiful morning and after some porridge for breakfast we broke camp at 7:30am as we had a long drive home later in the day. We soon reached he main watershed of Scotland between the headwaters of the Allt Grannda and the Allt Cam-ban. The path then twists and turns before descending downwards alongside the river in a giant basin- very impressive. We stopped for a bite to eat and to take in the amazing views of the waterfall of Allt Grannda. It had been fairly dry over the past number of weeks, so I can only imagine what this would have been like in full flow. 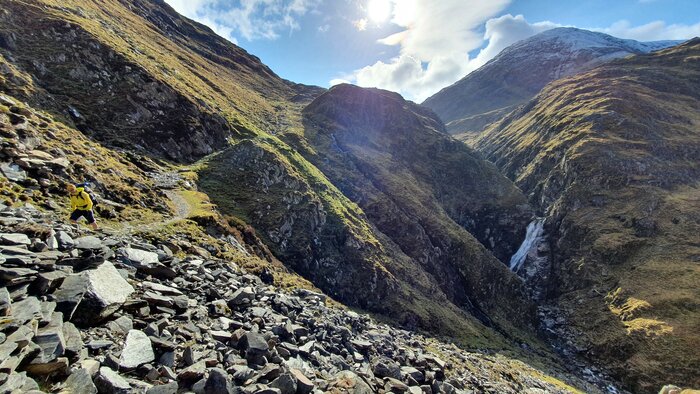 Waterfall - picture doesn't do it justice for how impressive it was

We continued to walk down off the hill and amble down the glen before reaching Morvich to the end of the walk at the National Trust for Scotland Morvich countryside centre. 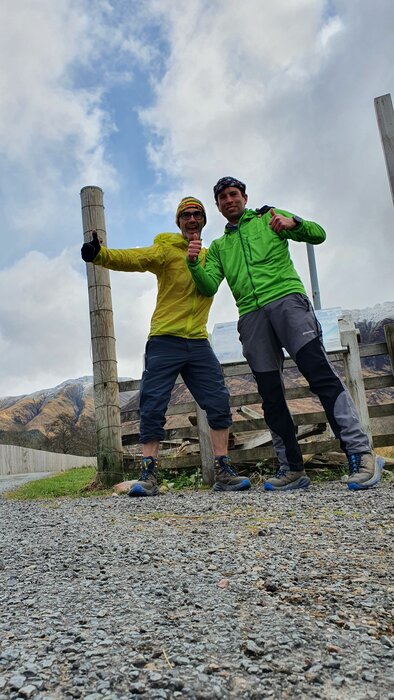 Final thoughts
- Work is currently being done on a path on the approach into Cannich to avoid having to go on the road. It's worth checking into what stage this is at as you may be able to avoid some of the road section.
- Even though I enjoyed the first half of the trail, the last few legs were stunning and it's worth taking your time on them to take in the scenery
- We didn't see anybody else walking the full trail and we really felt remote at points. I'd highly recommend giving this a go if you haven't already.
- Make sure you have means to filter or boil water if you are drinking from the streams or river. Once heading up towards and past the Youth Hostel, with all the dead deer it's best not taking any chances. May be ok at other points in the year but seeing and smelling the poor deer was enough to make me take precautions!

I've just finished packing. Well more or less, and then I'm off to experience the AKW. 48 hrs and counting. 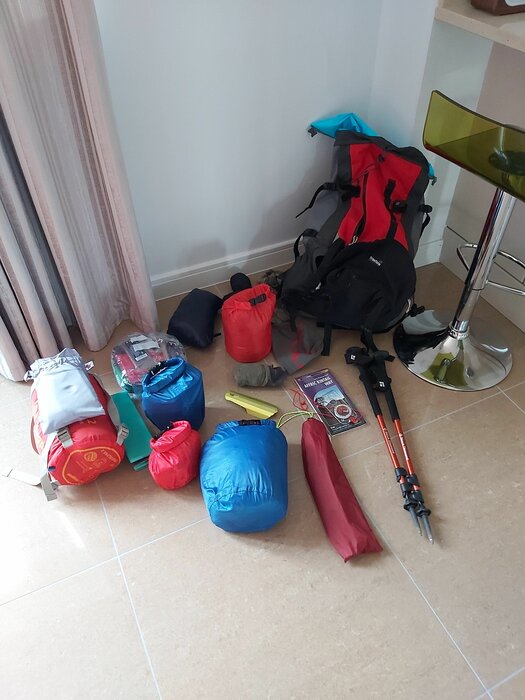