Lake District: Red Screes and Hart Crag round from Hartsop

Lake District: Red Screes and Hart Crag round from Hartsop


This turned out to be an excellent day's walk, albeit with a slightly brutal start straight up the hillside through the woods. The path is marked on the 1:25000 OS map and is very easy to find on the ground. The woods were a delight, no people, lots of birdsong.

Once above the treeline the views were extensive across the valley and onwards along the ridge. 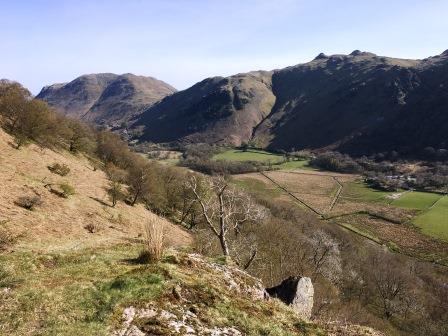 The obvious onward route from Hartsop Above How (an indistinct high point along the ridge - you could hardly call it a "summit") lis up to the summit of Hart Crag (large cairn) and onwards round to Dove Crag and Red Screes, descending down over Middle Dodd, however, given that the weather was good, and that I'd previously overlooked High Hartsop Dodd, I made the excursion out to its viewpoint at the end of the ridge via the much more worthwhile Little Hart Crag. High Hartsop Dodd is marked by a small cairn from which there good views down towards Ullswater. It's not a "summit" in my estimation, and scarcely worth the (significant effort required to return to the ridge,) but as a means of ascent/decent from either Hart Crag or Red Screes it would make for a good, shorter round.
Red Screes, by contrast, feels like a real Lakeland summit. Descent from Red Screes over Middle Dodd feels like a very logical continuation, and its cairn gives a fine retrospective of the route. Once off the ridge, the Hartsop Valley and the walk alongside Brothers Water provides a very pleasant finish to the day.