A lot of the members in my club have compleated their Munro's so I'm always on the lookout for an obscure alternative route to make things more interesting for them.
Beinn a'Chaorainn had been on radar my for a while but the poor parking on the A86 meant getting there very early, not easy if travelling up from the Central belt.
Looking through the WL reports I'd noticed an epic hike by Basscadet who'd climbed the Meagaidh range from Glen Roy, using her report we planned our route.
https://www.walkhighlands.co.uk/Forum/viewtopic.php?f=9&t=23604'

We set off from the car park at the road end at 9am and made our way past Brae Roy Lodge, crossing the picturesque Turret Bridge. Once past Annat the track fades out for about 500m, however you can see where it cuts diagonally up the hill ahead, within no time you're passing through the famous Parallel Roads. 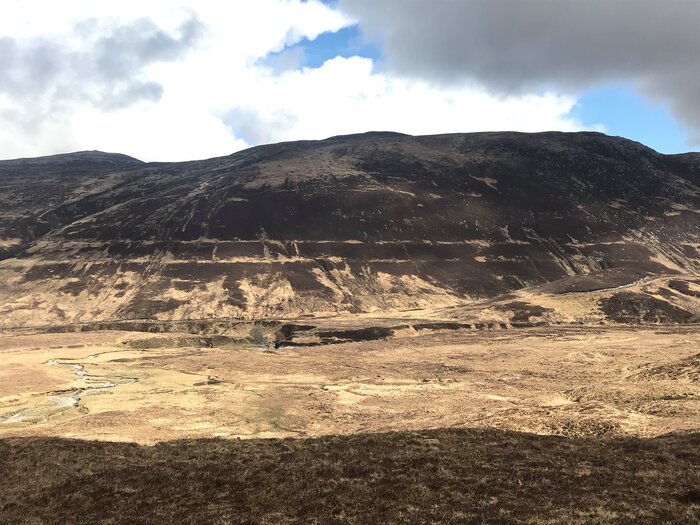 The route over into Glen Agie was once a well maintained estate track with culverts, embankments and cuttings however time has taken its toll and it's now no more than a rough track.

When in Glen Agie you'll lose and gain height several times before reaching the bridge at Dog Falls. These falls are pretty spectacular, even after a few weeks of low rainfall Once past the falls continue to up the Burn of Agie to where it meets the Allt Sguadaig at 500m.

From here you get a good view of the route ahead, and also 'The Window' between Meagaidh and Poite Coire Ardair. Cross the river and aim for the cairn at 770m, however if it's been raining recently expect it to be a bogfest. Once past the cairn the ascent is pretty consistent, head directly south onto the wide ridge, be mindful of the drop into Coire Buidhe to the east. Before you know it you're on the summit plateau at 1043m, The ridge above Coire na h-Uamha

Take a breather then continue along the ridge above Coire na h-Uamha to the main summit at 1052m, caw canny though, those cornices are unstable and have claimed lives in the past. The views are spectacular, with Loch Treig directly to the south and Loch Arkaig reaching out to the west behind Beinn Teallach, you can even see 'The Narrows' where Loch Linnhe meets Loch Eil at Fort William. Retrace your steps back along the ridge, if your thinking of doing Beinn Teallach don't forget you still have a long walkout back to the car so check your timings.

Beinn a’Chaorainn from Glen Roy - 1 May 2021 at 09_06.gpx Open full screen  NB: Walkhighlands is not responsible for the accuracy of gpx files in users posts