Almost every winter since about 2009, I have considered buying touring skis when there is a big dump of snow. Usually I think about it for about 5 minutes and then forget until the next cold period, when I'm kicking myself again for not doing anything about it. Jackie had similar feelings back in the February half-term, when everyone else on Carn na h-Easgainn apart from us was skiing. This time we decided to do something about it, and after scouring ebay for a few weeks, we managed to order ourselves some decent second-hand kit for a reasonable price. Which brings us to this weekend....

Sadly this isn't our first ski-touring-hill-climbing report - that will need to wait until next year at least! But the skis I had bought required collection from Aberdeenshire, and this was the first opportunity we had to legally leave the Highlands. Given the last couple of weekends had seen us on rough ground on the west coast, a couple of days of easier walking on paths also appealed. On top of that, we had a standing invite to stay with super-bagger Gill in Strathdon - we couldn't take her up on that offer yet, but we could at least meet for a walk.

A sunny drive over the Lecht to Alford got me my skis, then it was on to Bogfields to meet Gill. I had identified this as the route up Pressendye which probably had the least ascent. We were parked up by by 1pm to eat lunch and await Gill's arrival at 1:30. We were soon on our way from Bogfields, climbing a gently sloping forestry track. 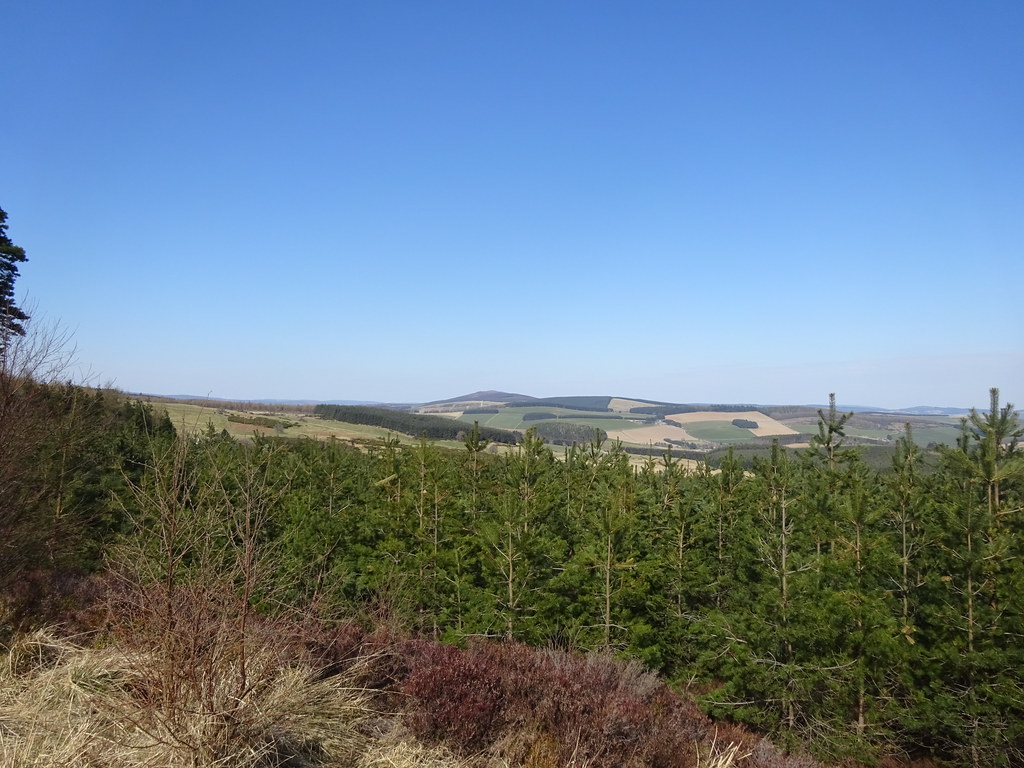 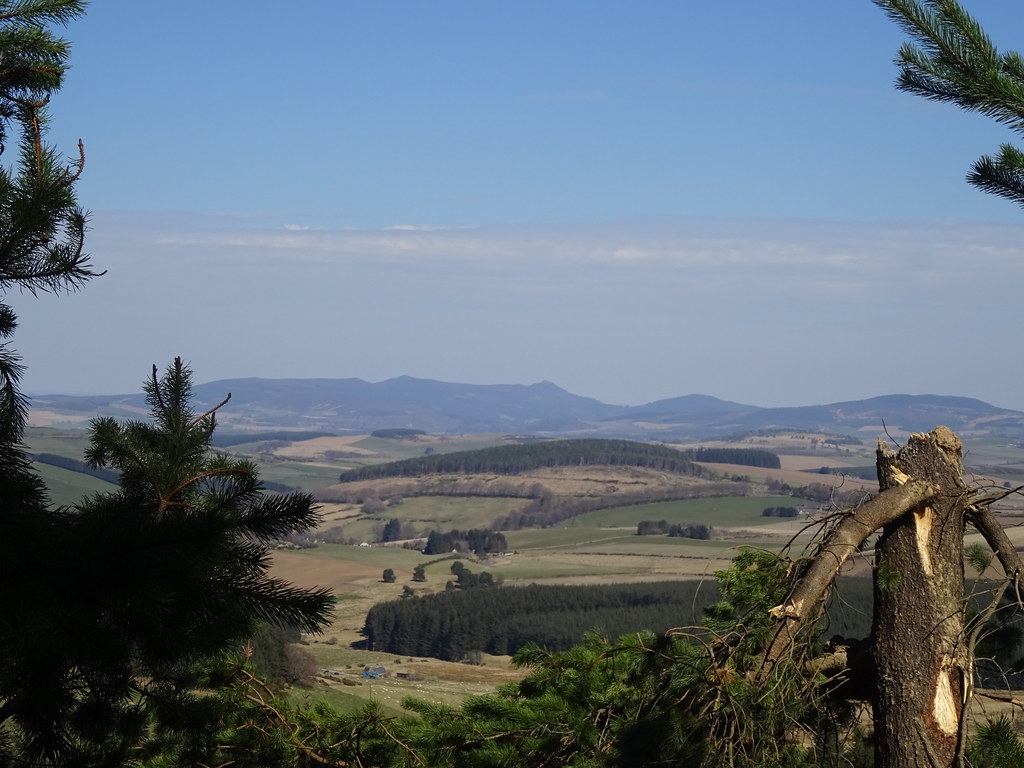 The map is approximately correct around here but some of the intricacies of the route didn't jump out at us immediately. After losing height gradually for a short distance, we spied a gate on our left which didn't quite seem to be where we expected it to be, although we were pretty sure that it would get us out of the trees and onto the NE flank of the hill. It did exactly that, winding around more than expected. 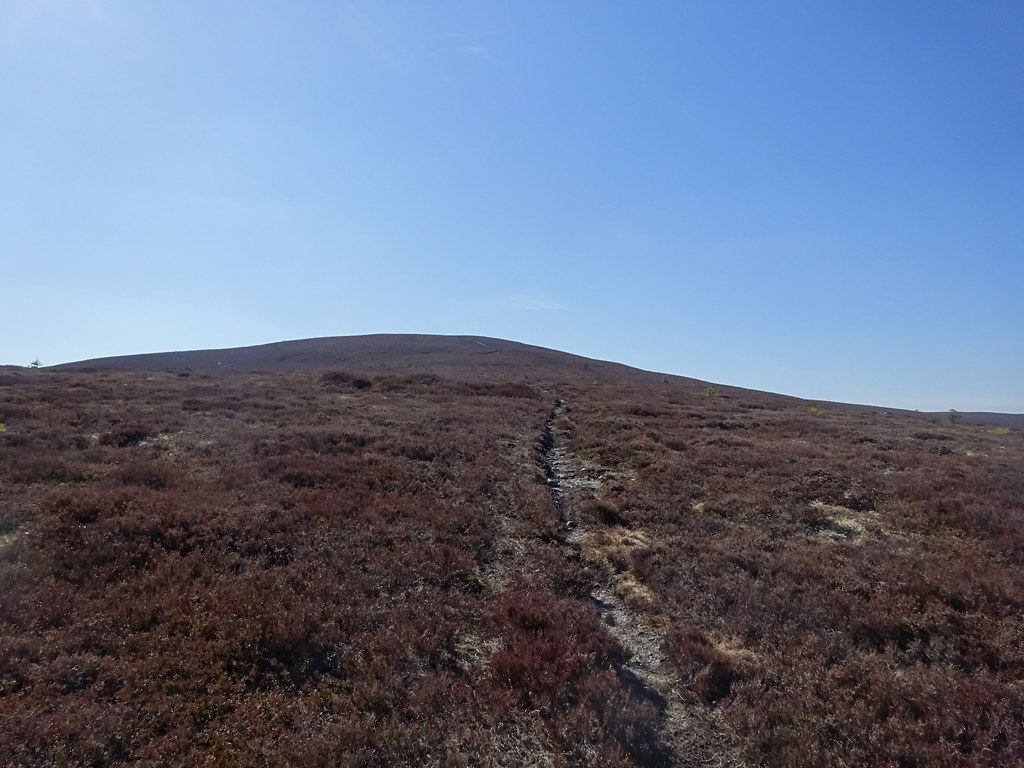 Out of the trees 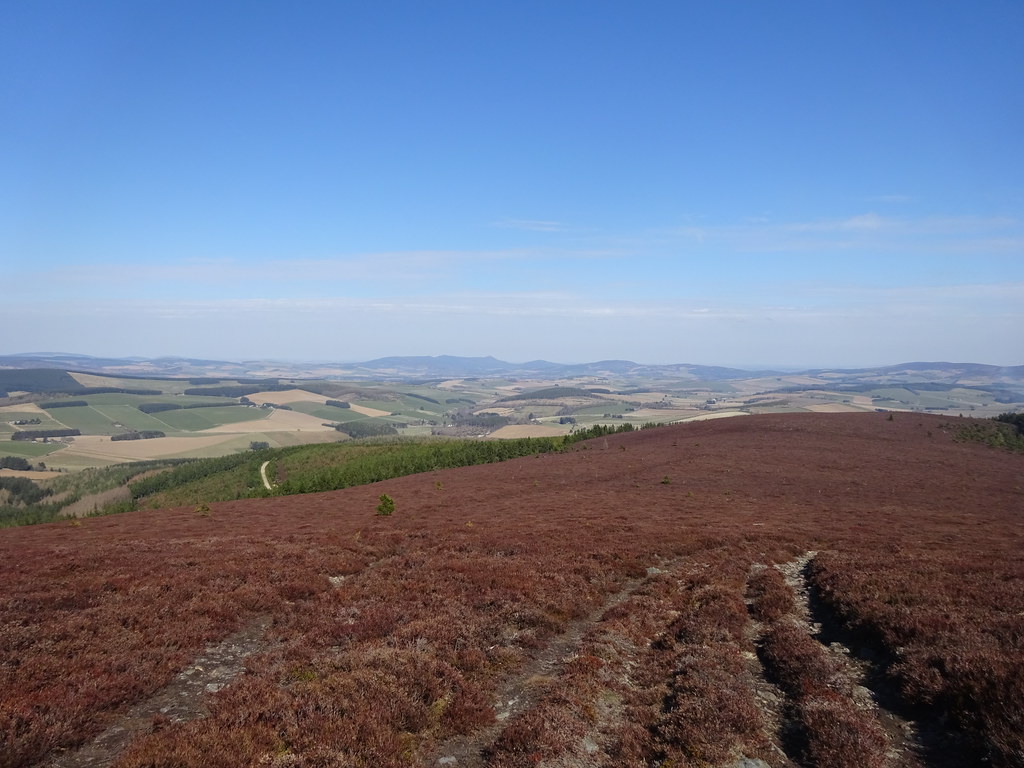 There are plenty of worn routes through the heather up here, and we picked up one which led us nicely to the summit - is this really over 600m high? It seems too easy! We were greeted with distant views of Deeside and the eastern end of the Cairngorm plateau as well as a gentle but cold northerly breeze. We decided to have a decent long break and some banana loaf that Jackie had made for the occasion. 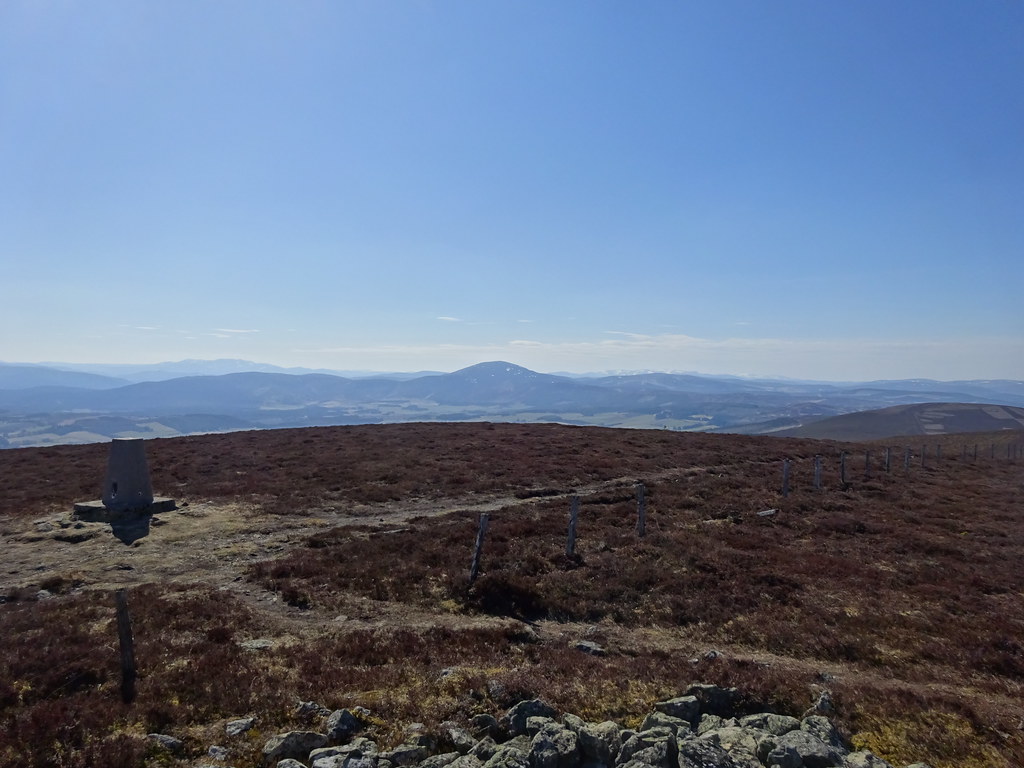 Morven and the Cairngorms 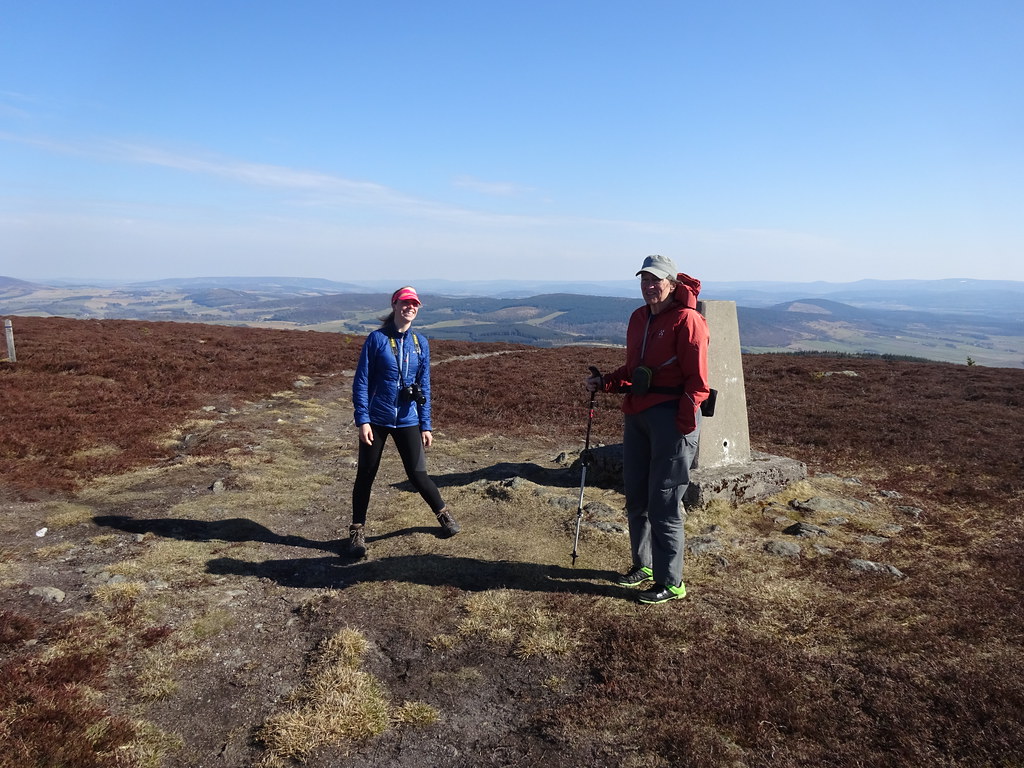 Once again I found myself enjoying this hill far more than the map would suggest possible - we pretty much always go to the west coast given the choice, but the softer landscapes of this side of the country are a nice alternative once in a while. Gill had joined forces with Jackie in vetoing any of my wilder route suggestions (it's always fun to try though!), but they were both agreeable to an alternative route off to the south. This looked on the map to be straightforward, and I knew the top part was fine as I'd come up this way previously.

Down at the treeline, a path went off to the left looking as if it would provide us a shortcut. We followed it and it actually wound around a fair bit, but eventually deposited us on the track near Blackhills Burn. The only place I had a slight concern was at this corner of the forest, where I thought we might have to climb a fence. As we approached, gorse bushes made things look even more impenetrable, but thankfully there was a pedestrian gate. After crossing the only muddy area of the day (over the Blackhills Burn), it was an easy amble downwards on a good track. A farmer who was digging ditches nearby drove over for a chat. 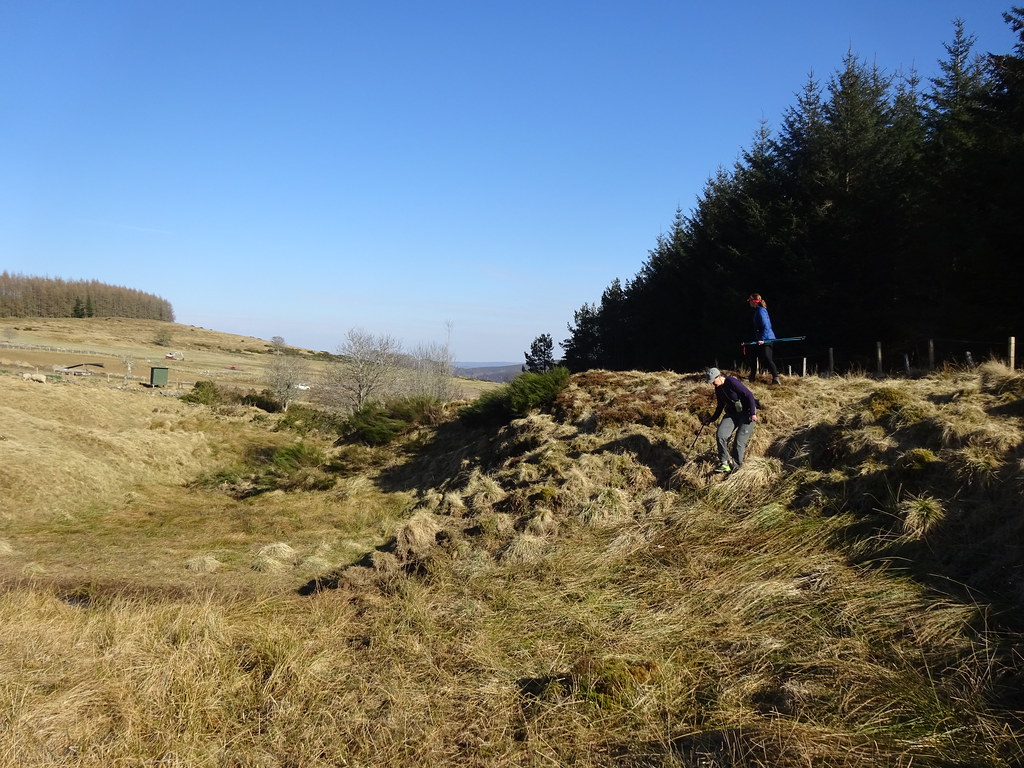 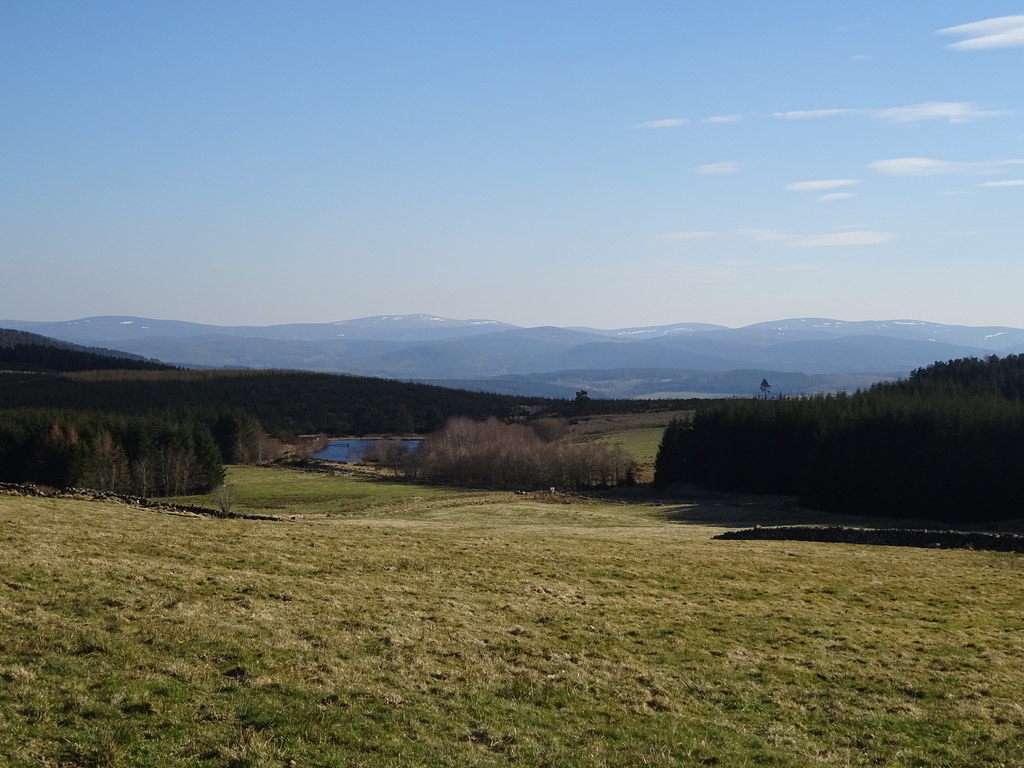 Unfortunately due to not paying attention, we missed a track on the left and ended up down at Blackhills farm. We would now have to climb back up slightly to get back to the car! Fortunately there were good paths the whole way avoiding any further gardens and farmyards, and we were soon back at the cars after a pleasant afternoon wander. 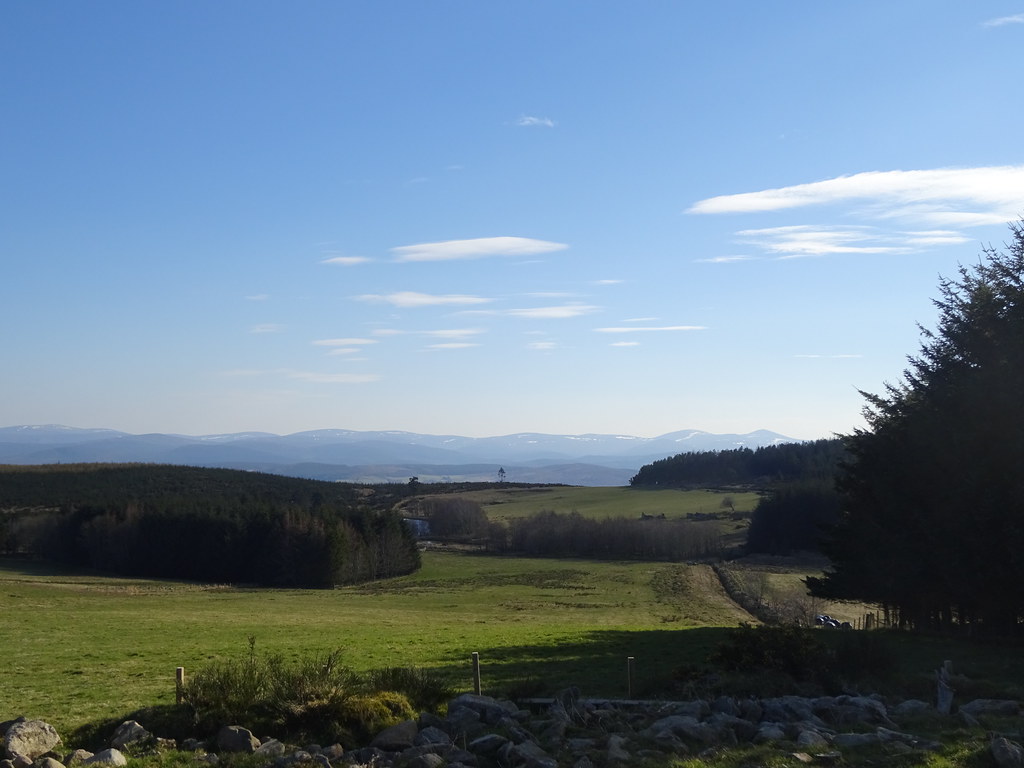 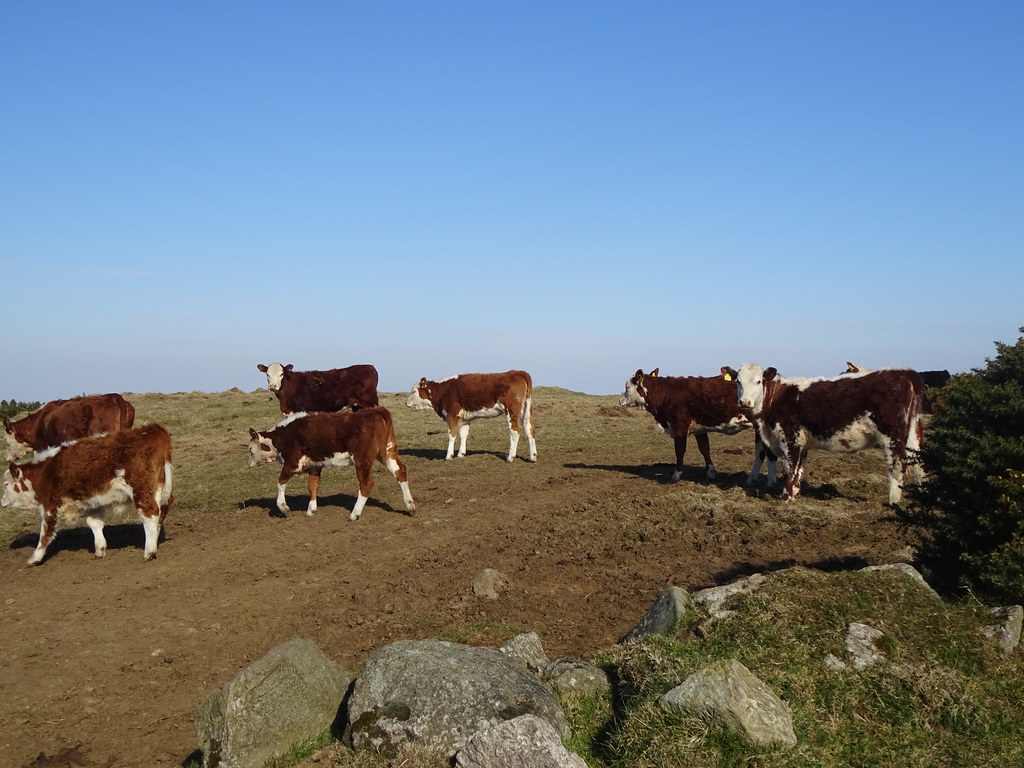 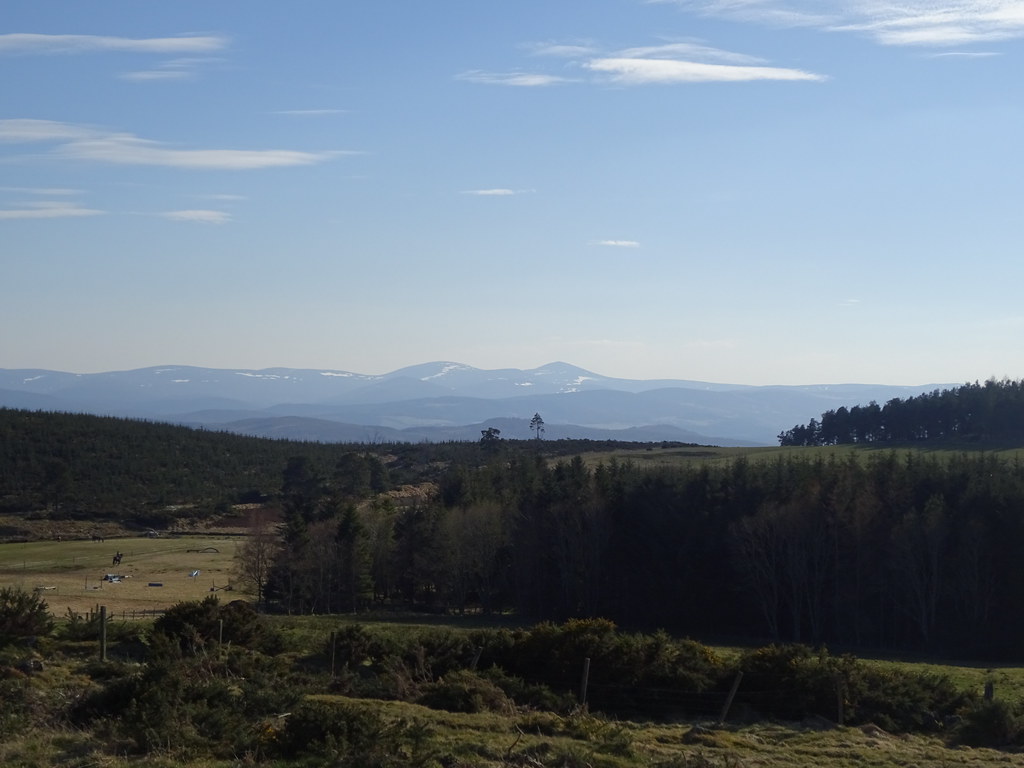 I had my sights on Craiglich for afters - this would have been a quick and easy hill to wander up nearby, however Gill suggested we come back to her garden in Strathdon for tea and cake. We were a big fan of this idea and followed Gill for the 20 minute dash through the backroads of Aberdeenshire. After plenty of tea and some great cake, we eventually considered leaving. We would like to have stayed out over this way and would happily have camped in Gill's garden, but we decided we would stick to the current (rather arbitary) rules and head back over a couple of regional borders to camp in Highland instead.

We crossed back into the Highlands at Bridge of Brown and rather than continue to a favourite spot near Aviemore, we decided to stop just up the hill. It was late and all we really wanted to do was have dinner and go to bed. 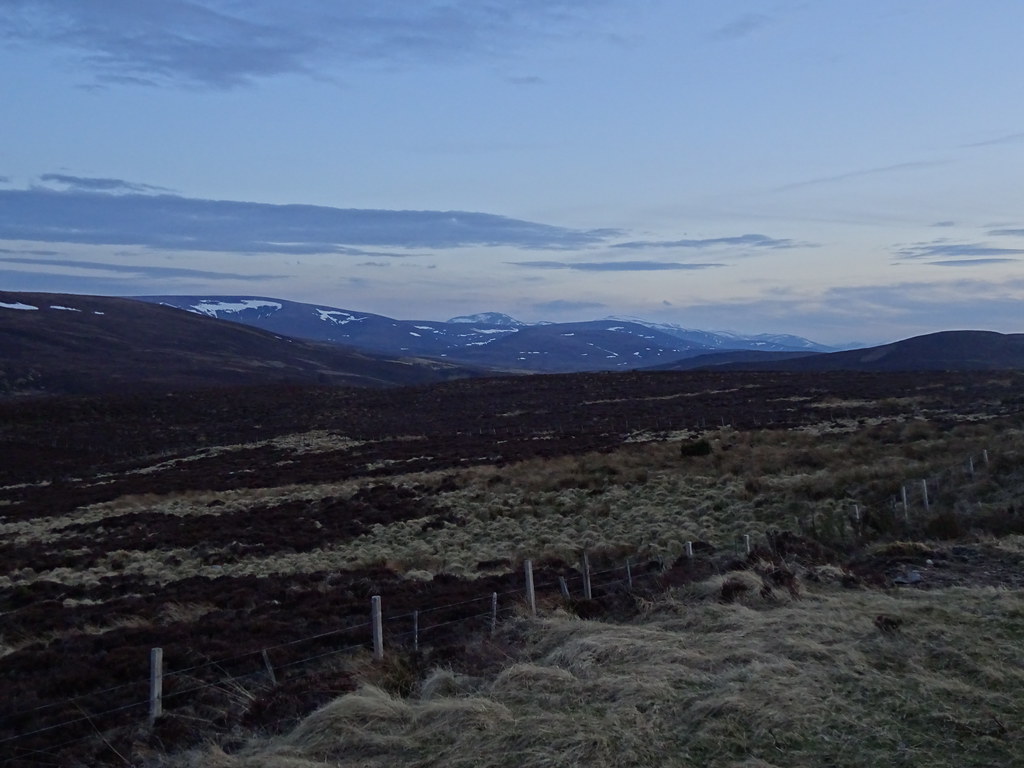 Cairngorms from the east 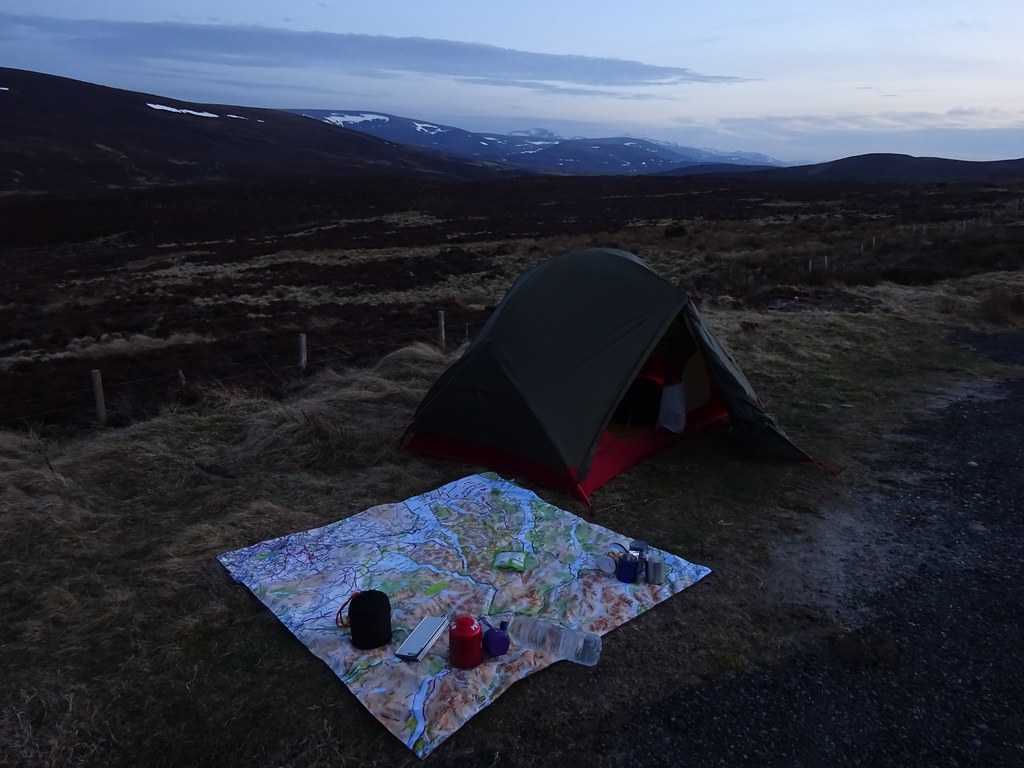 The next day dawned grey and breezy. Camping so close to home was largely about the change of not staring at the same four walls in the house rather than allowing us a particularly early start, and by the time we had decided to drive round to Tomnavoulin, it was 9:30am. Today's wander up Carn Diamh would be similar in effort and character to yesterday - relatively shallow gradients and good paths. Parking up near Eastertown, we were soon on our way. Jackie was definitely feeling the effort more than yesterday.


CD.gpx Open full screen  NB: Walkhighlands is not responsible for the accuracy of gpx files in users posts 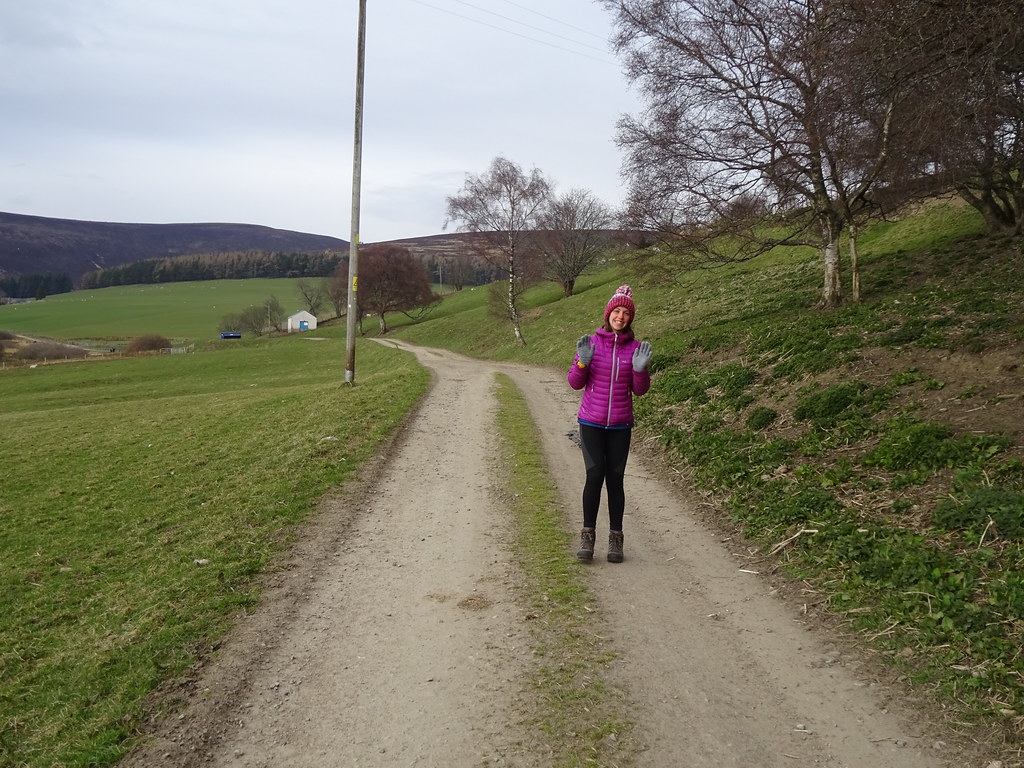 Starting the walk near Eastertown 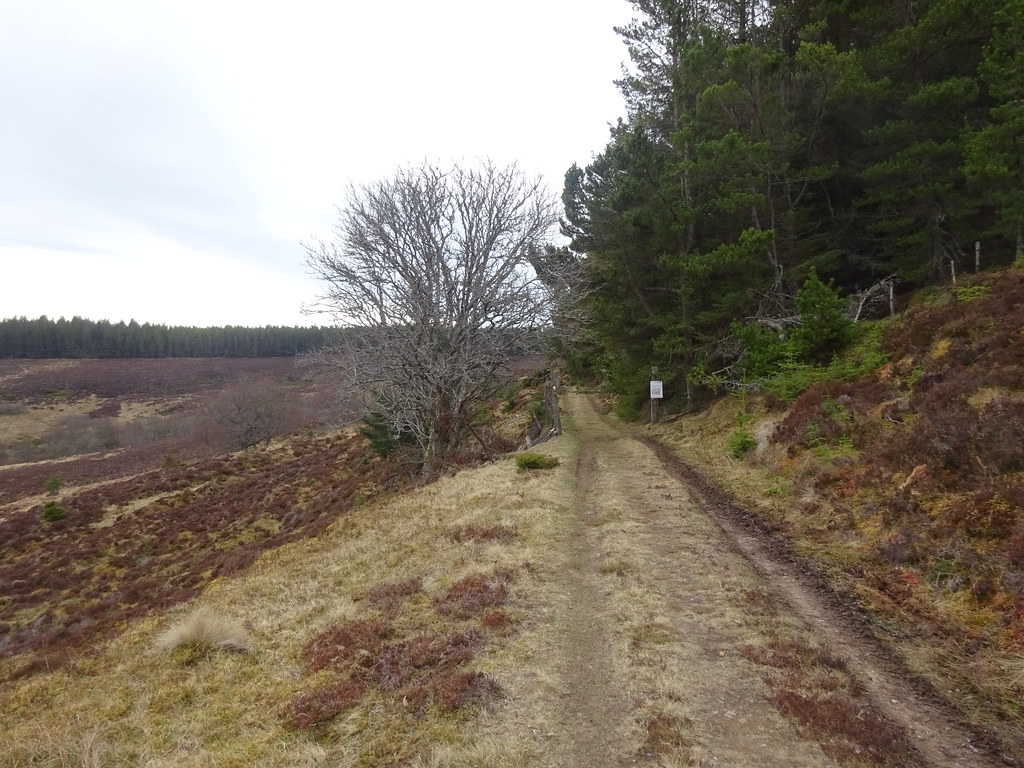 Into the woods on Carn Ellick

Not too much to say about the route really - despite the impending rain, the ground was very dry and there was dust rising from the fields whenever a breeze hit. We passed Westertown and Craighead, heading for the woods and the high spur of the Speyside Way. Once on that it was out along the summit ridge and past the only patches of snow we had seen at this level. 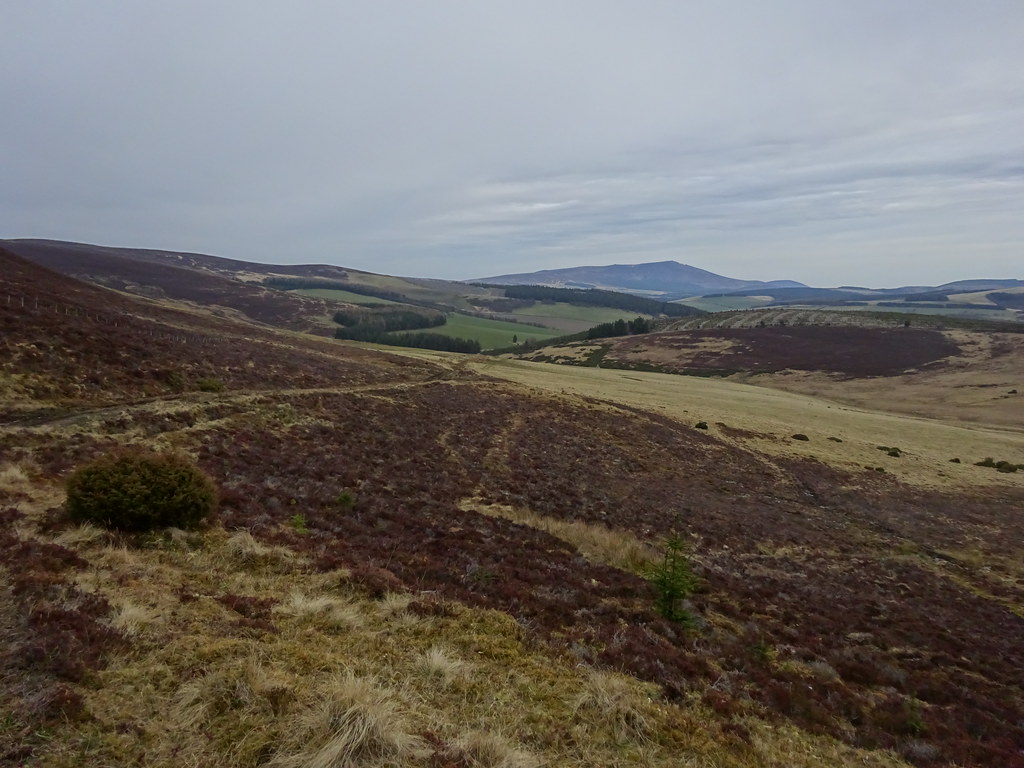 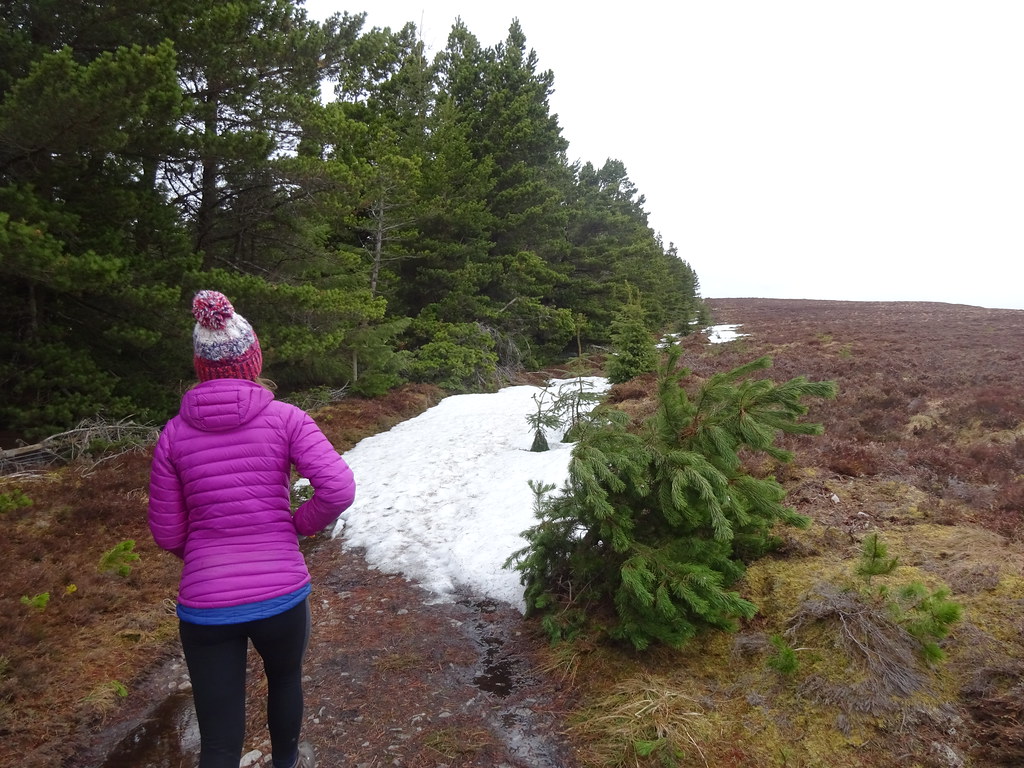 It was breezy on the summit and the weather was coming in from the westm but we could still just about make out the Cairngorms. The other side of the hill was busy with mountain bikers. 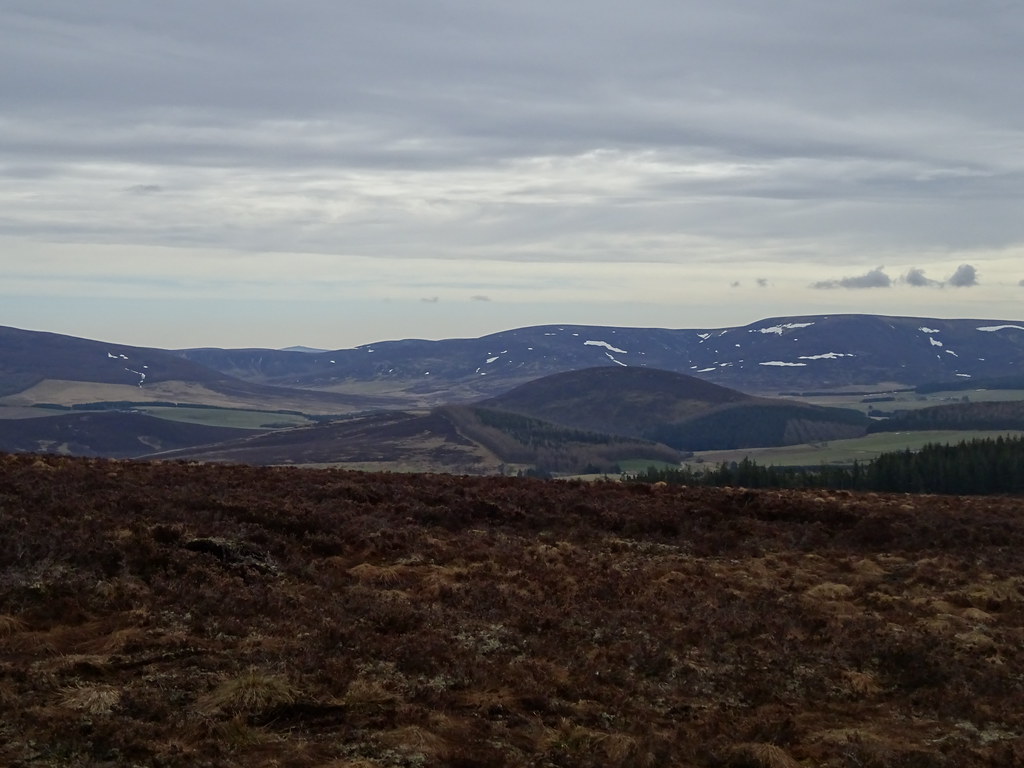 Ladder Hills and the Braes of Glenlivet 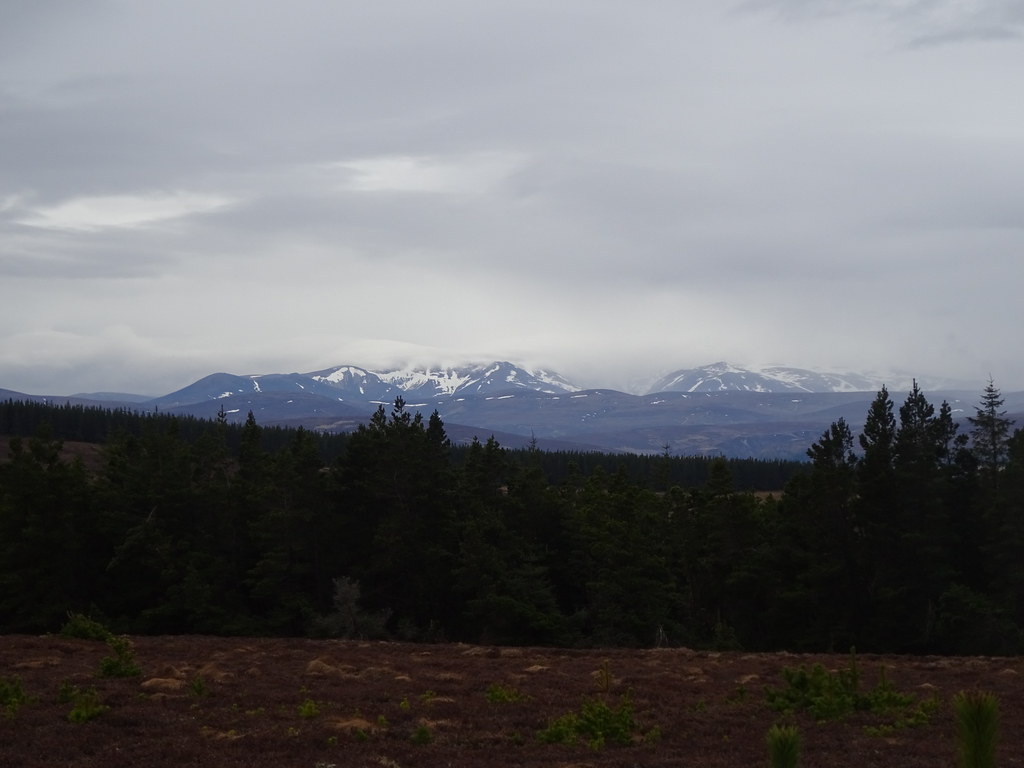 Ben Avon and Bheinn a Bhuird from Carn Daimh 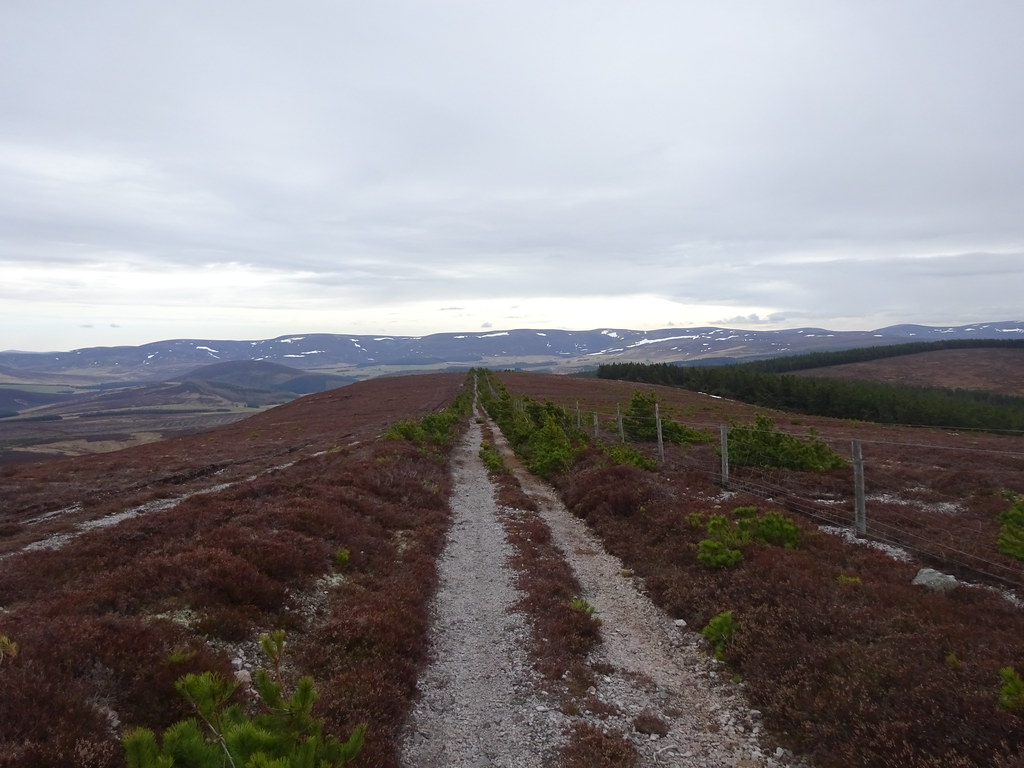 Back down the SE ridge 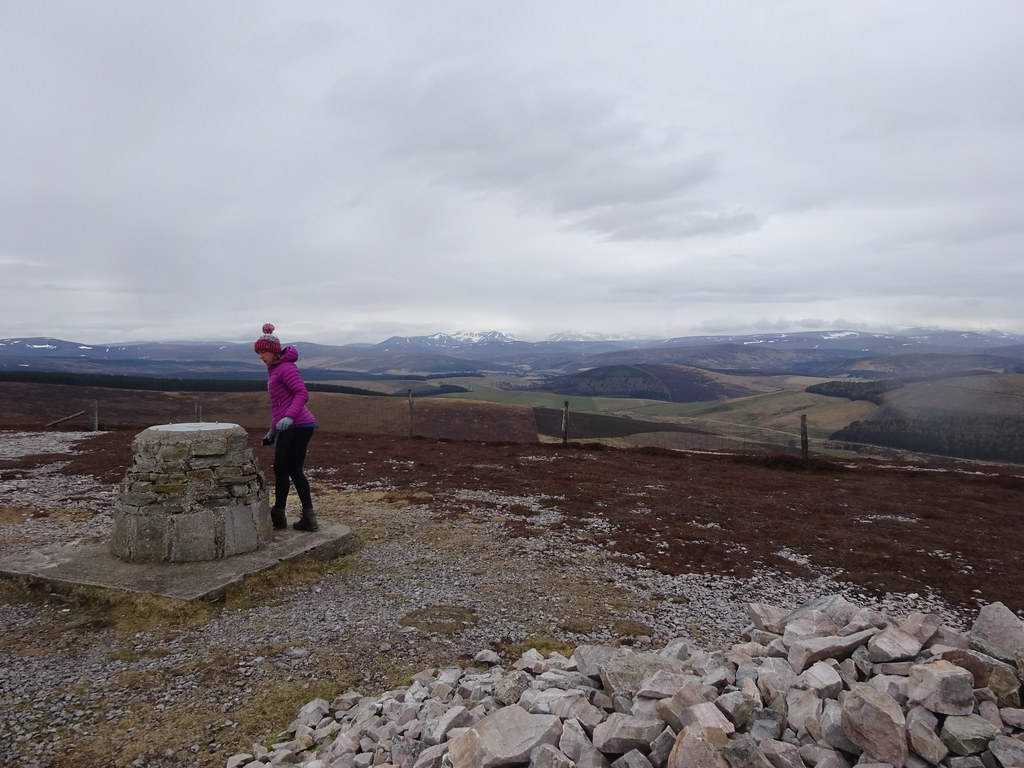 Continuing along the Speyside way for a short while, we turned off on a route signposted the 'Smuggler's Trail', which led us easily back down to Westertown. Jackie was fairly knackered on the final stroll back to the car, so we ditched any ideas of going up the Bochel afterwards and headed home as the rain began. 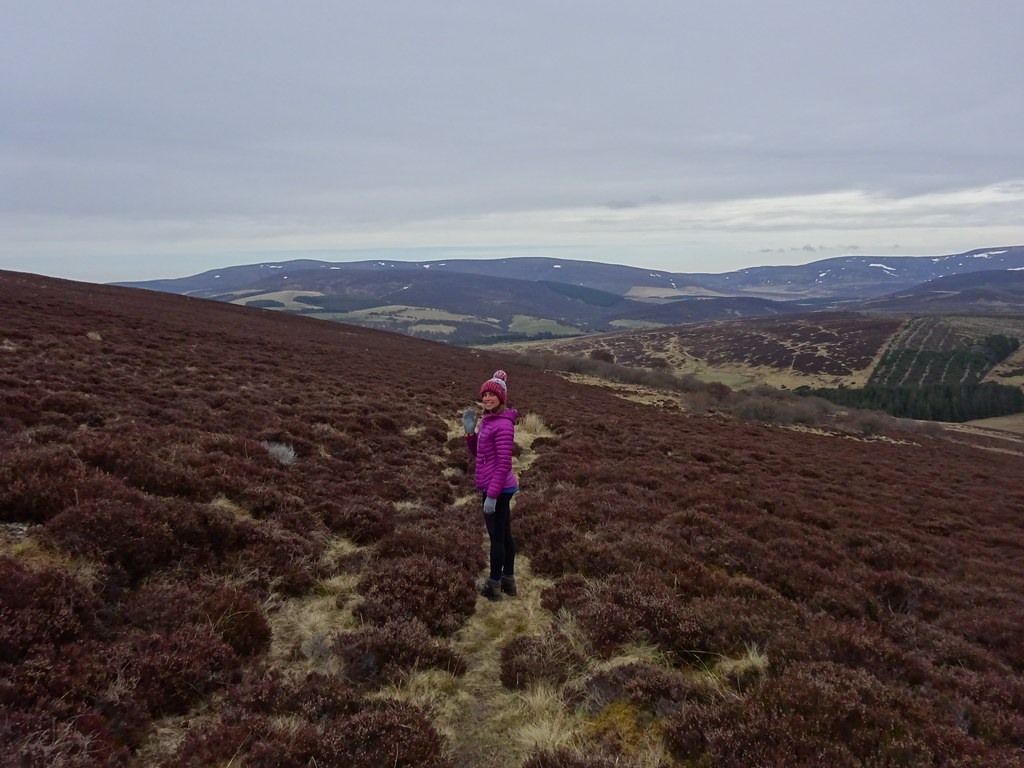 Smugglers trail back down 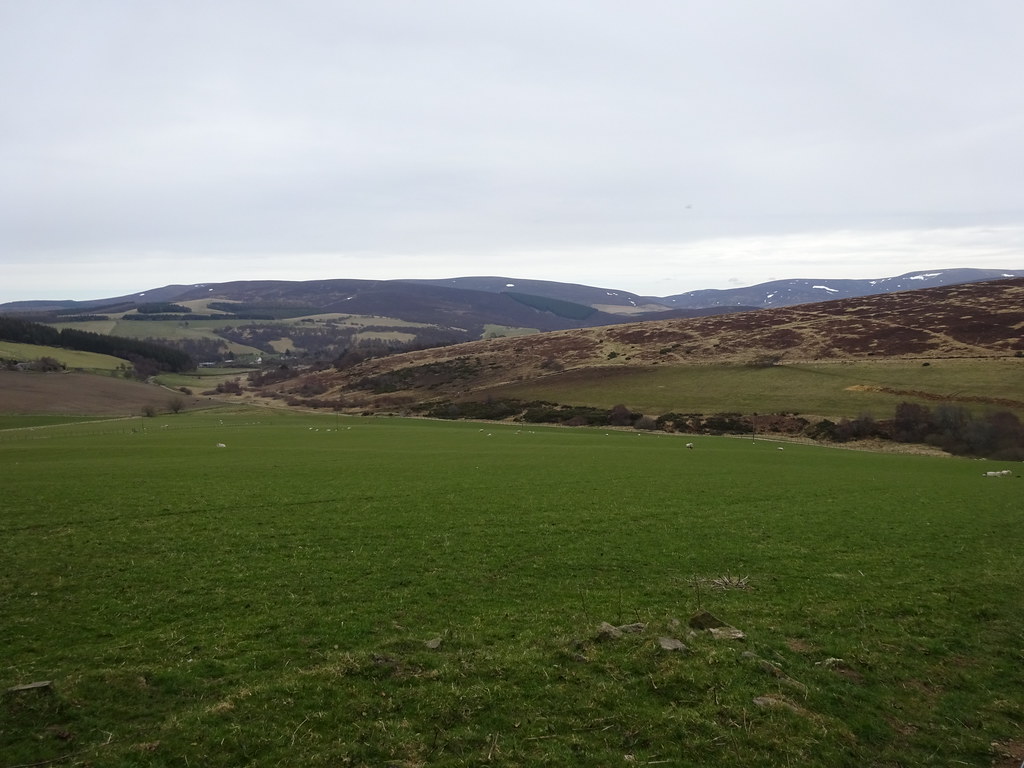