Back in the Lakes for a twice-postponed stay in Hartsop to try to tick off a few of the remaining Wainwrights. Weather has not been great until today, but the forecast looked promising (at least for the morning) so we made an early start. The plan was to head up Gray Crag, and possibly return over Hartsop Dodd provided that the ascent to Caudale Moor from Threshwaite Mouth was safe (Wainwright says it's dangerous in snow and ice, and we could see there was some snow on the tops - we were just not sure how much). If the ascent looked dicey, we would descend via Pasture Bottom and leave Hartsop Dodd for another day.

We set off rather gingerly as Lorraine had a bad headache - if it didn't clear quickliy we would have to turn round, but it was too nice a day to not at least try to get out. 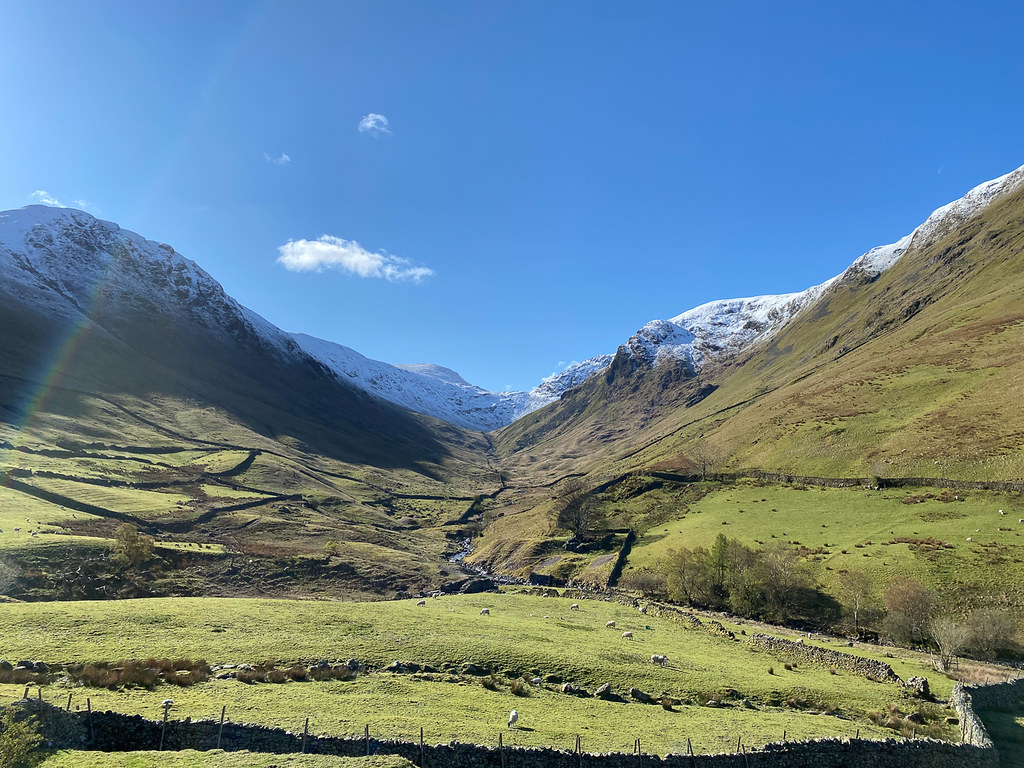 The first view up Pasture Bottom towards Threshwaite Mouth showed quite a lot of snow - but would it still be there by the time we got there? 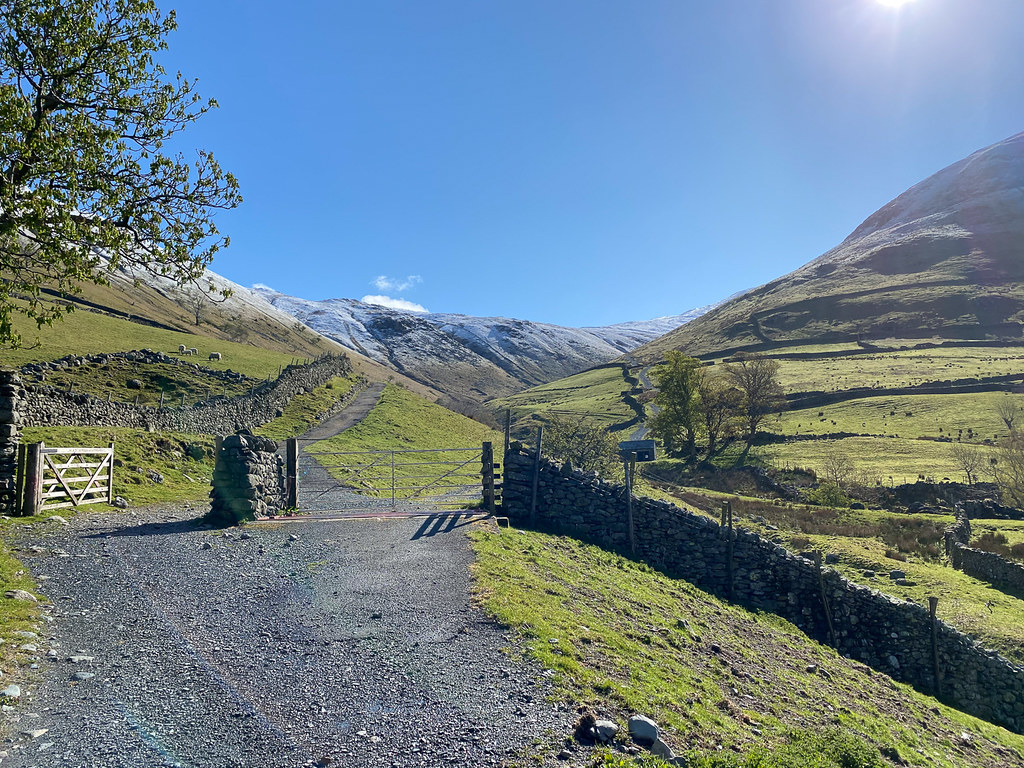 Parting of the roads

The climb up towards Hayeswater Reservoir felt very different from the trip we had made just two days earlier, in rather worse weather. We chose the right-hand path around the flank of Gray Crag rather than the left-hand path via the filter house - even though we planned to go o the reservoir before ascending so either would work. 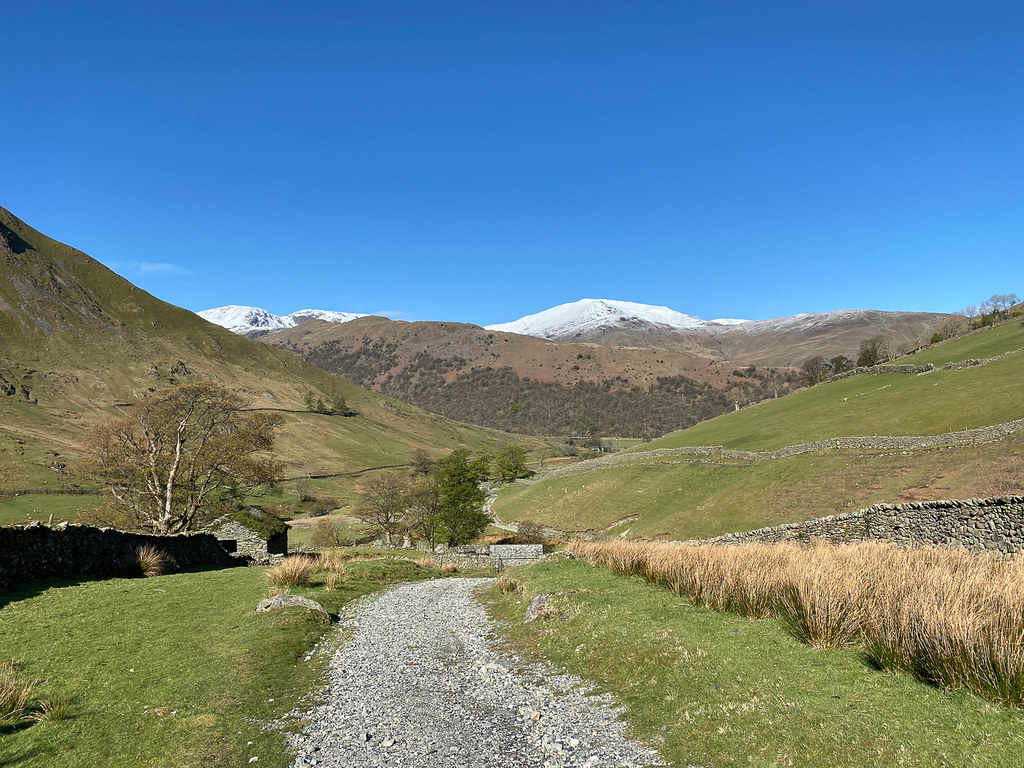 Looking behind us there were fine views of Hartsop Above How that we had climbed the day before. 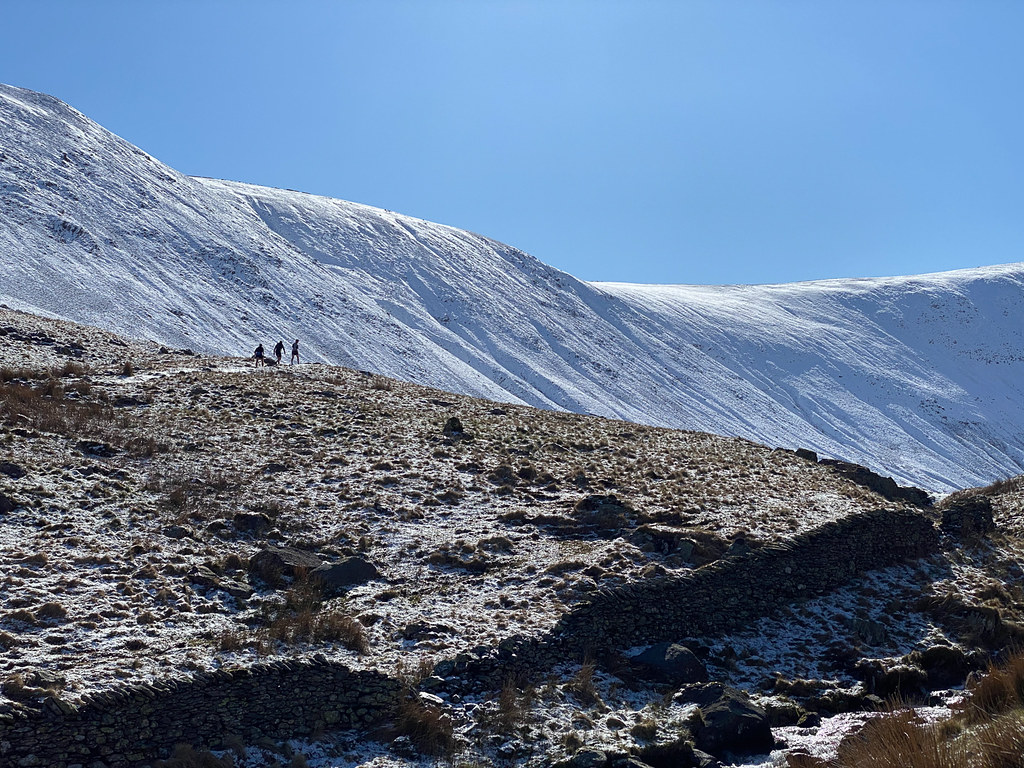 As we approached the reservoir (and the snow line) we were passed by three fell-runners, in shorts. Brrr. Still, made for a nice photo... 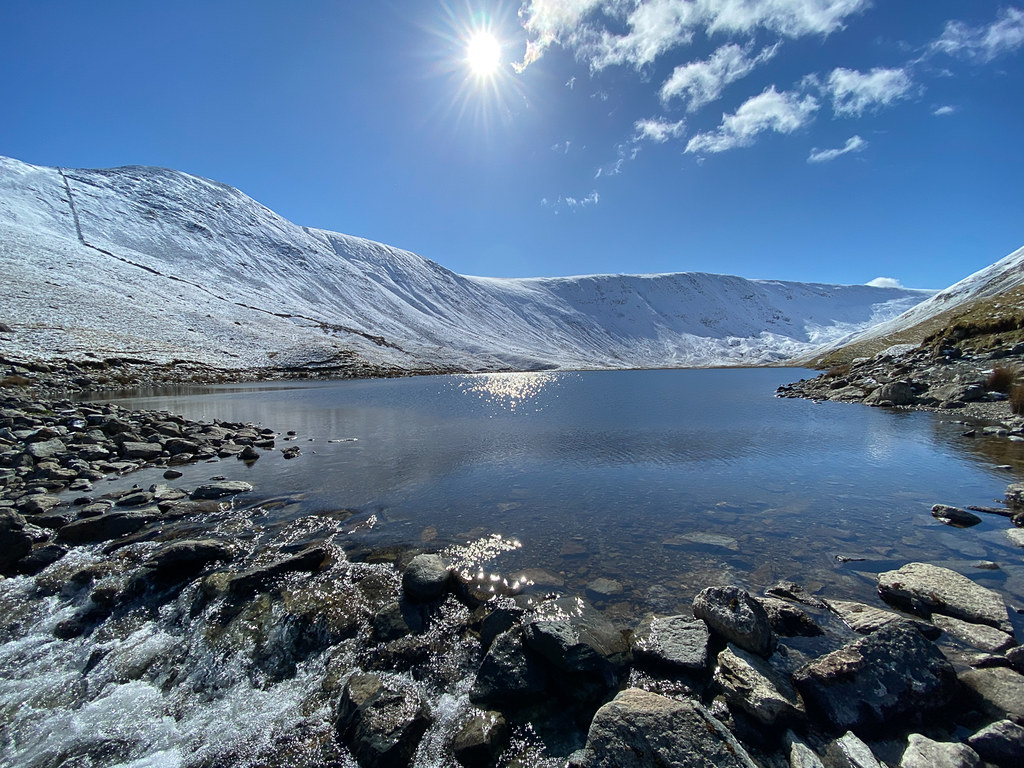 Hayeswater two days ago had looked stormy, but today it was beautifully calm. It was becoming clear that the overnight snowfall had been quite heavy, and not just on the tops! 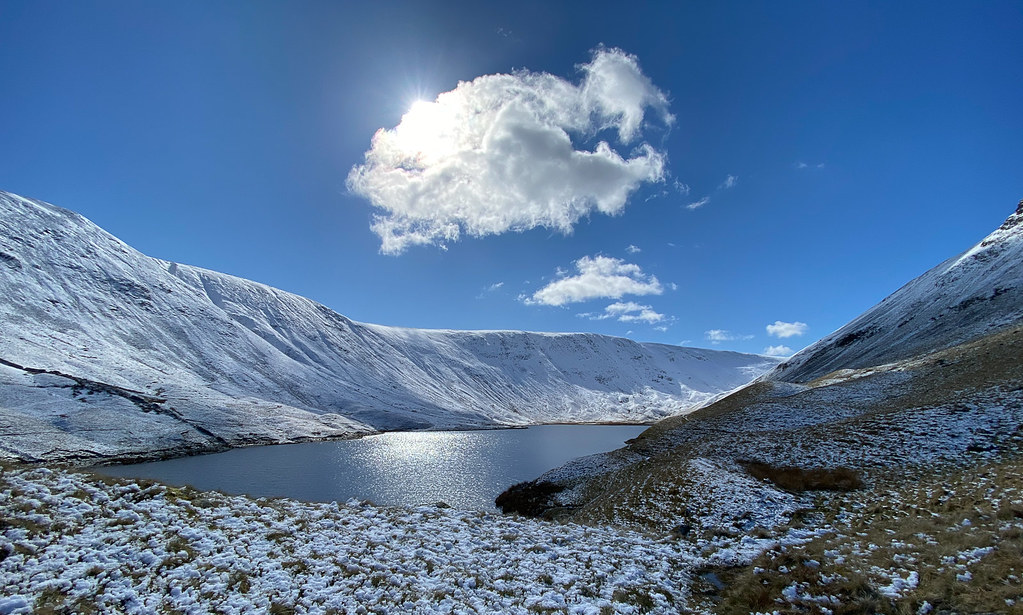 The snow made everything very pretty, but it also made paths hard to spot (and I'm not even sure there IS a path to the Gray Crag ridge from Hayeswater, though Wainwright does recommend it as a route up. But it was easy enough to strike off across the fellside to get to the ridge, and once we got there there was a trace of a path (though all the prints on it seemed more sheep than human). But the ridge is wide and grassy (according to Wainwright - we couldn't tell under the snow) so it didn't greatly matter whether we were exactly on the path or not. 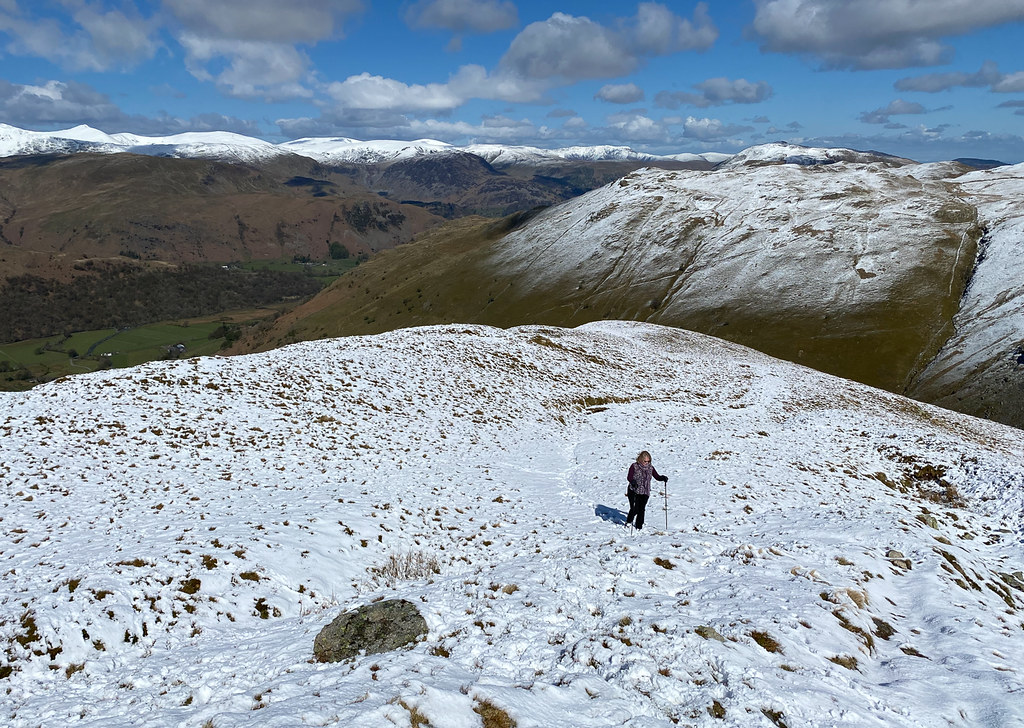 Along the top of Gray Crag

The snow got deeper as we approached the summit. Probably only a few inches except where it had drifted. But it had drifted in lots of places!

Views from the summit were great in all directions. At this point we had a change of plan - it seemed clear that Threshwaite Mouth was going to be snowy, and would force us down to Pasture Bottom - but the day was too nice for such an early exit, and High Street looked beautiful. So we decided we would return via High Street instead.

Bit of a trudge up to Thornthwaite Crag - there were footprints to follow but the snow was getting deeper and it's quite tiring having to lift your boot out of the snow every step. 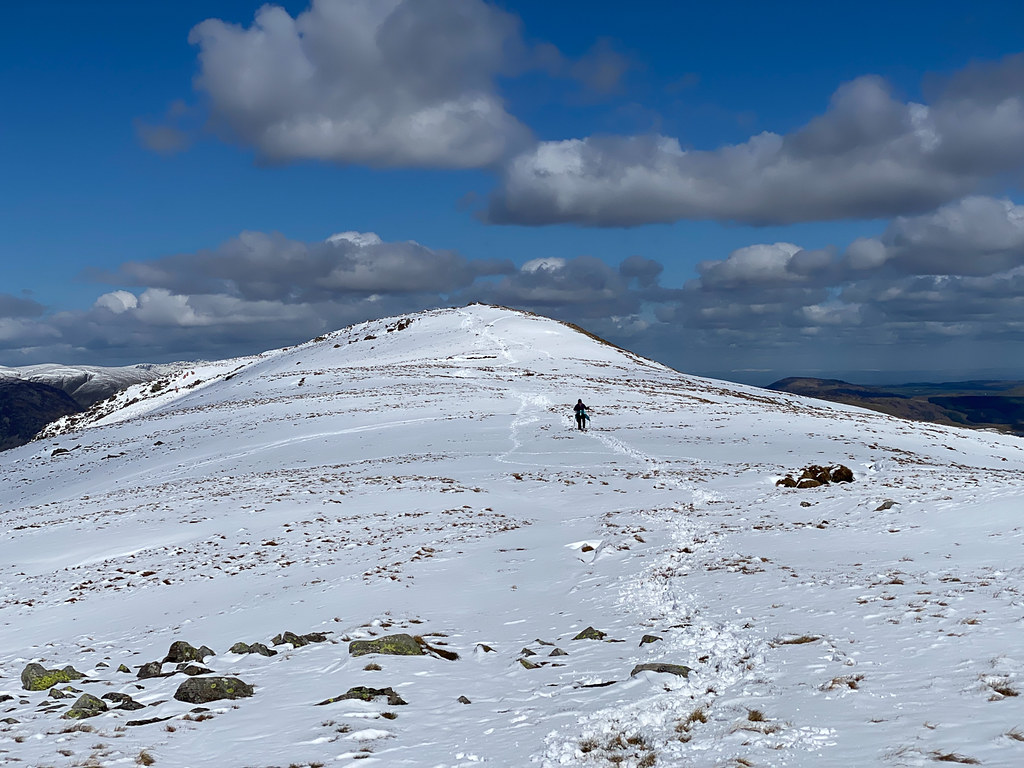 So we stopped for an early lunch. 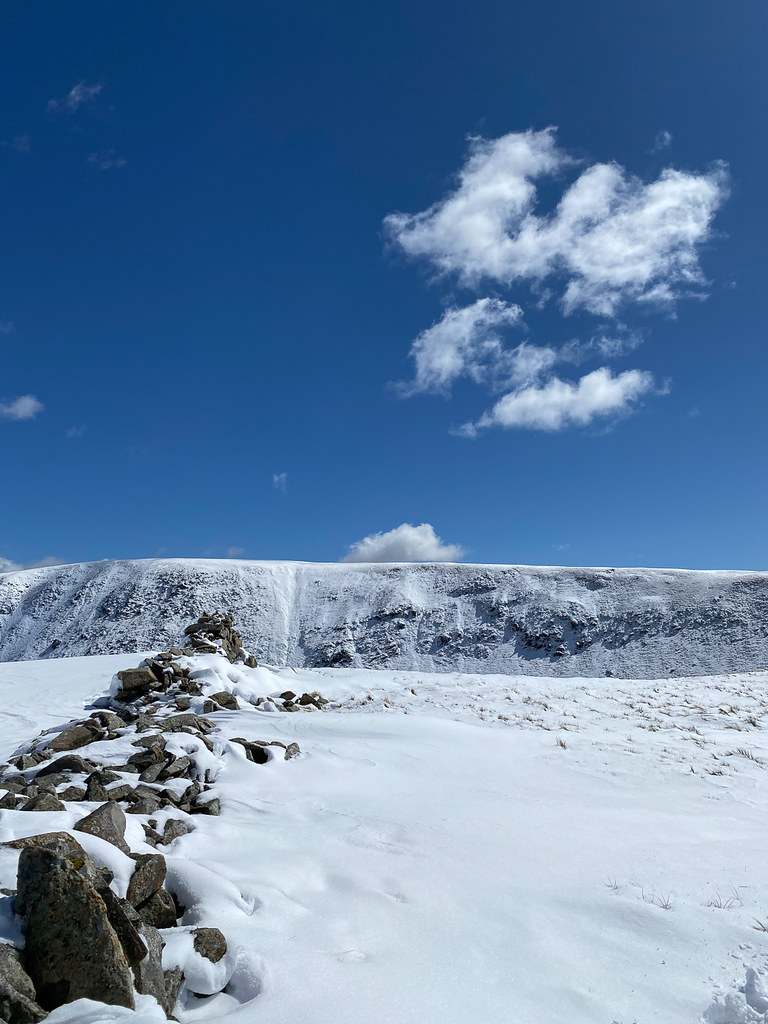 More fluffy clouds just asking to have their photos taken. 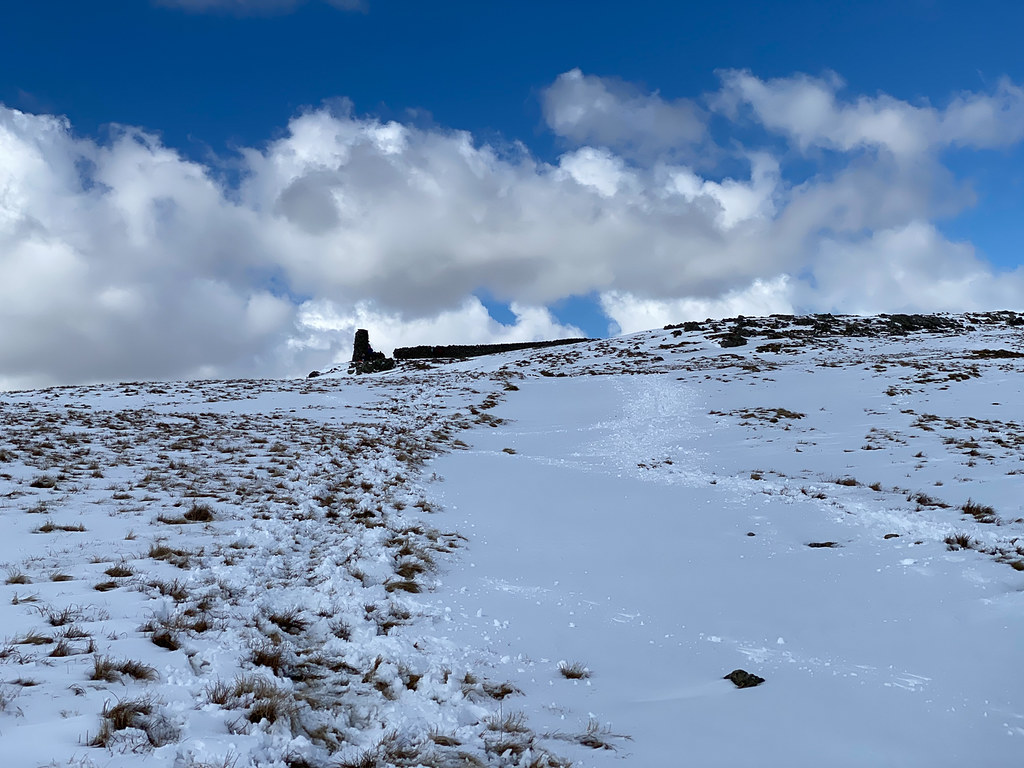 We didn't linger at the summit of Thornthwaite Crag, but pressed straight on towards High Street. The snow was a bit deeper but the path through it was well-enough trodden that the going was easier. 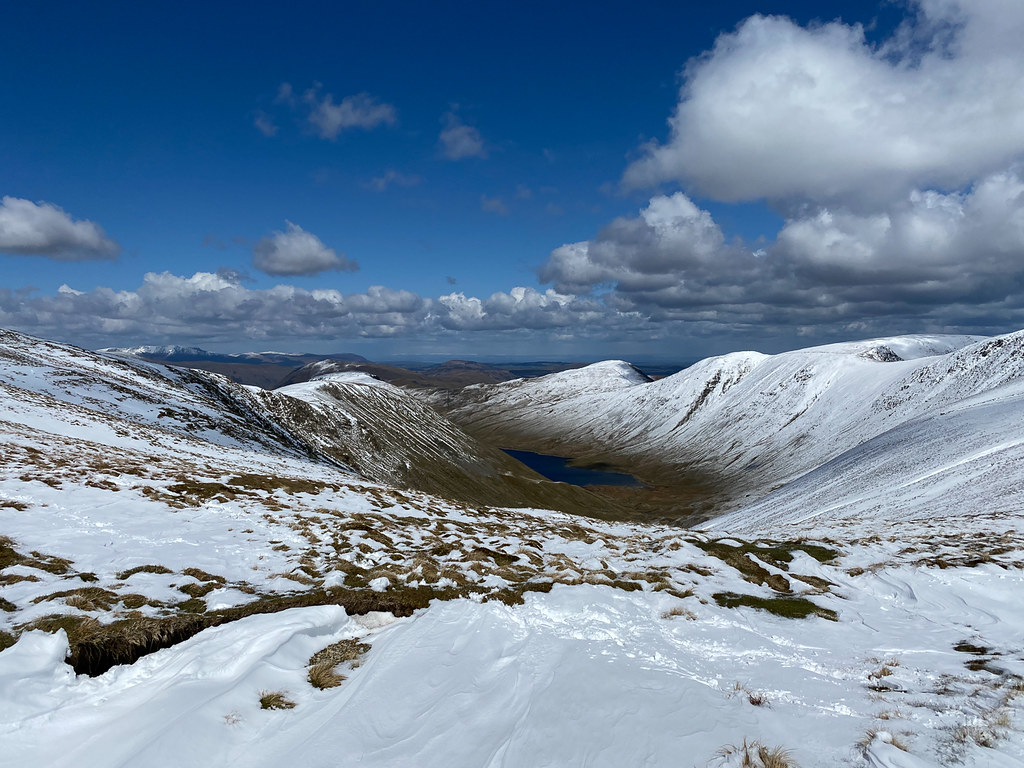 The path here should be following the old Roman road, but it was mostly blocked by snowdrifts so whoever was first on the fell this morning had made their own route, and everyone else had followed in their footsteps (literally). It required a bit of faith that whoever that first path maker was knew where they were going! The snow here actually made the going easier, evening out any bumps... 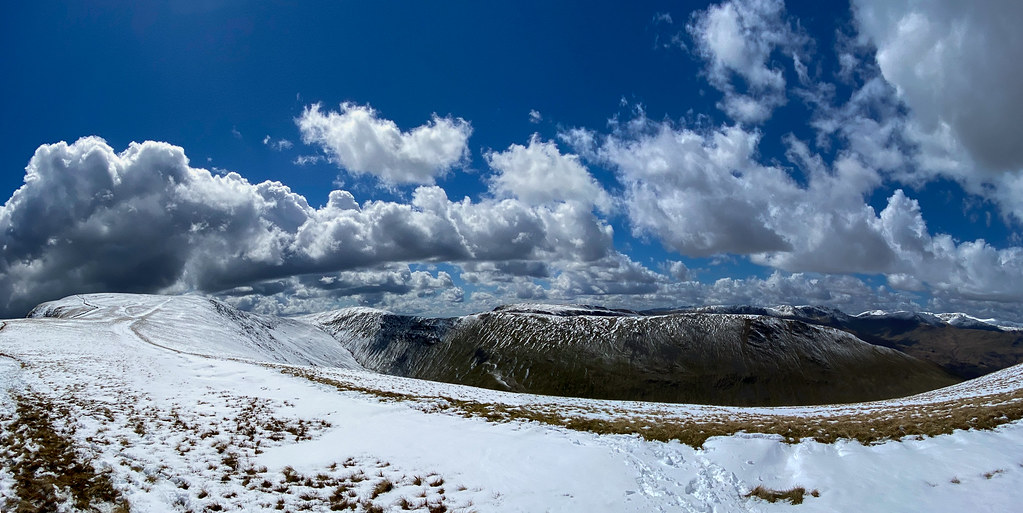 We paused for more refreshments at the Straits of Riggindale, and to admire the spectacular scenery. 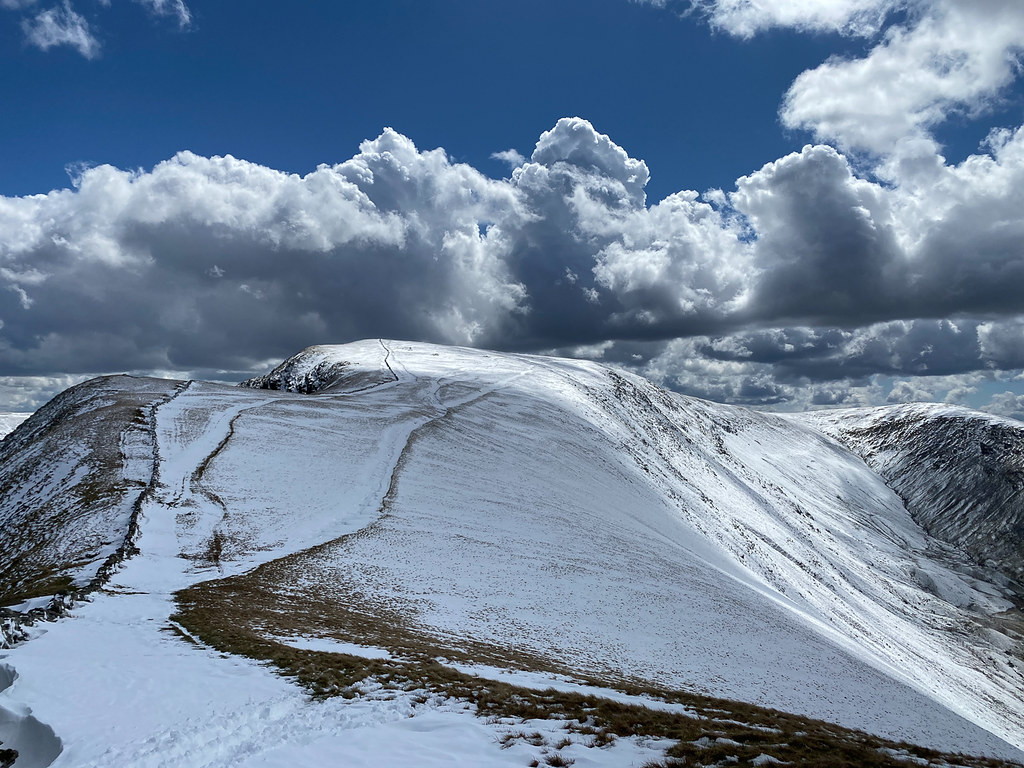 High Street from Straits of Riggindale

The clouds were getting more frequent and the sunny periods shorter - it was hard to keep up taking hats and gloves on and off according to whether it was too hot or too cold. There was a tiny flurry of hail as we passed The Knott (so tiny that Lorraine didn't even notice it) 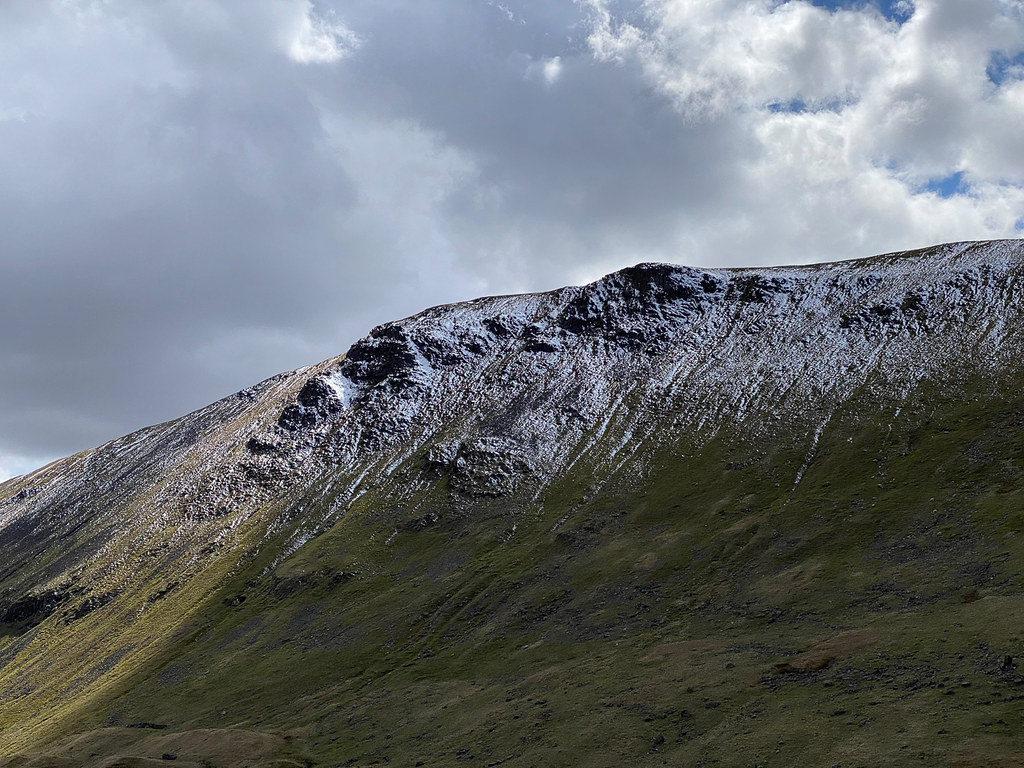 The descent to Hayeswater followed a rather smaller path than the one I had been aiming for, but was easy enough. It was quite noticeable how much of the snow on the flanks of Gray Crag had gone since the morning.

From the reservoir we retraced our steps on tired limbs back to Hartsop. We are a little out of shape following lockdown, and it felt like we had had a long walk - but a very enjoyable one with great scenery (and Lorraine's first visit to High Street that involved an actual view).

Re: Gray Crag and High Street

A fine effort with some great pics on a good walk

Sounds as though the headache didn't spoil the walk