our_route.gpx Open full screen  NB: Walkhighlands is not responsible for the accuracy of gpx files in users posts
How does the usual university student pass the time between the final exam and results day?

Obviously, it's free time one could dedicate to hillwalking!

Over the 10 days since my final exam, I'd already done 3 walks, and the weather allowed me to keep going, so why would I deny it?

On top of that, it was already May; although I'd kept mostly to Grahams on the previous walks, after checking the snow conditions on several ski resort webcams, I found even Munros largely snow-free, meaning I really didn't have to be afraid of that when planning walks.

On top of on top of that, the next suitable day was a Wednesday. Spittal of Glenshee had been in my eye for a while - being something of an eyesore if I'm completely honest, as buses frequented it only on Wednesdays and Saturdays, and I worked Saturdays - but it also meant that should a nice, free Wednesday crop up, it would be top of the list. And a nice, free Wednesday was beckoning me over pretty suggestively so, excited and blushing, I went - and, shortly after arrival, experienced my first. My first... time seeing proper Highland cattle. An immediate thought: based on the hairstyles alone, my classmates from 10 years ago would've fit right in...

Suggestiveness aside, I followed the track as per route description, marvelling at the sights around as I sped up Glen Lochsie, hardly needing to pay attention to my feet as the track offered no resistance or challenges. Well, with one notable exception in the form of the river crossing shortly past Glenlochsie Farm, which took quite a bit of concentration. Fortunately, I managed to hit the stepping stones and pass without getting wet feet. Crossing back was then much easier. 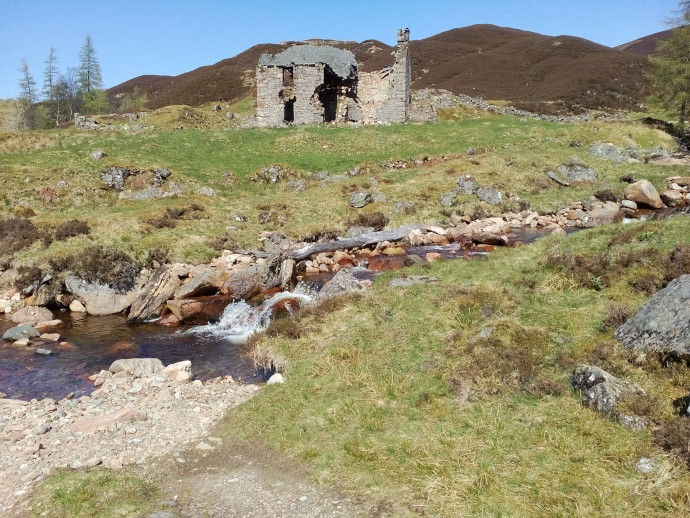 And ascend I did, the track sometimes zig-zagging as it took me up the slopes of Breac-reidh. Given what the track was like, the way was basically paved almost to the summit, so judging by the predicted time, I guess I ran up Glas Tulaichean. An hour between the Spittal and Glenlochsie Lodge, another hour from the lodge to the Munro summit, offering luxurious views all around.

A look back down Glen Lochsie from partway up Breac-reidh

From the summit... looking S/SE, over Clais Bheag on the left? I feel like that would fit, but honestly can't remember... A path heads up Carn an Righ, where I'm going next, as An Sgarsoch looks from afar (which is the norm for the Place of Sharp Rocks, really)

To get to the path, all that was needed was to cross the upper Gleann Mor. Taking the northernmost shoulder of Glas Tulaichean, I started descending. The route description says where to leave the shoulder and go across the glen, but I didn't really feel up to it. Probably due to the recent Lochan a' Chaorainn episode, I stayed on the shoulder until the bealach below the 858 m top and only then, very carefully, crossed to the other side. Boggy nightmares, I guess, despite the fact that burns should be easier to cross when they're well defined and the slopes on both sides are steeper... 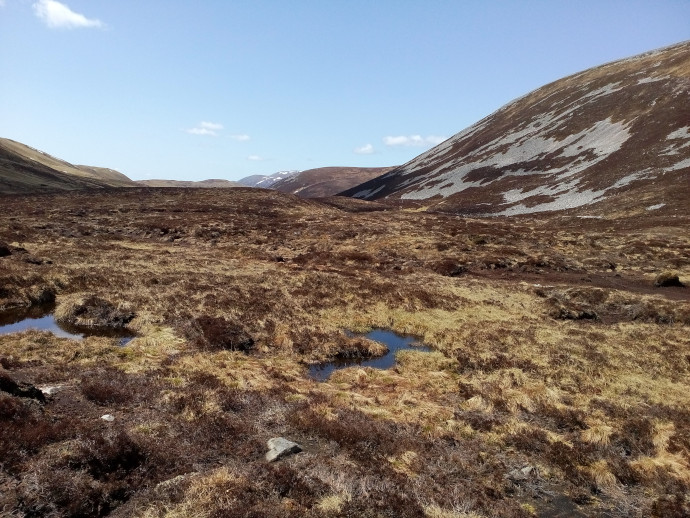 Picking my way through the bog. I've made it a long way back west to Carn an Righ

Once on the path, the 771 m bealach was reached easily, and the rest of the way up Carn an Righ followed a similar pattern. A little steeper, but there still was a path to follow. 25 minutes between my turning point and the bealach, another 25 to reach the summit.

Mam nan Carn and Beinn Iutharn Mhor from a little above the bealach. Seeing the path contouring Mam nan Carn was much appreciated :D

SW views from Carn an Righ, Beinn a' Ghlo's Carn nan Gabhar prominent in the centre of the picture, above the end of Glas Tulaichean's exceptionally long W ridge

NE views from Carn an Righ, with Beinn Iutharn Mhor in the middle, Glas Tulaichean's actual summit on the right, and the high Cairngorms far back on the left

On the way down to the bealach, I met two guys heading up. A short chat later, after I'd explained the rest of my route and they'd protested quite vehemently about the idea of them doing the same,

I headed for the path I'd noticed before hugging the N slopes of Mam nan Carn, turning left into the bealach, and nipping up the third Munro, Beinn Iutharn Mhor. Distant views don't change much no matter which Munro I'm on

But the close-ups keep showing the stopping points of this walk from different angles (here, Glas Tulaichean is centre, Carn an Righ on its right, in front of Beinn a' Ghlo)

And that was underscored when I crossed over to Mam nan Carn, the gentle wave below Glas Tulaichean on the above picture. I was quite literally between the three Munros. A Munro wherever you look; not a bad situation to be in. East: Uh... there's the slope I needed to descend to get back to the suggested path, and Loch nan Eun... and those should be Carn an Gheoidh, Carn Aosda, and The Cairnwell on the horizon, right?

This descent was probably the most technically challenging part of the walk - but the picture above explains nicely that nothing hair-raising was going on. Descending diagonally, I rejoined the path shortly before reaching the loch. Incidentally, when scanning the hillside for the path, I saw the two guys I'd met on Carn an Righ, not that far from the 771 m bealach. 'I went over two more hills and still wasn't overtaken,' I thought to feel good about myself.

On the other hand, I was practically whizzing through the route, stopping on the summits for not much longer than it took to take a few pictures, with the intention of enjoying them later, on the bus or perhaps at home. Is that the best tactic to enjoy being out on the hills? Hard to say who was really winning there... 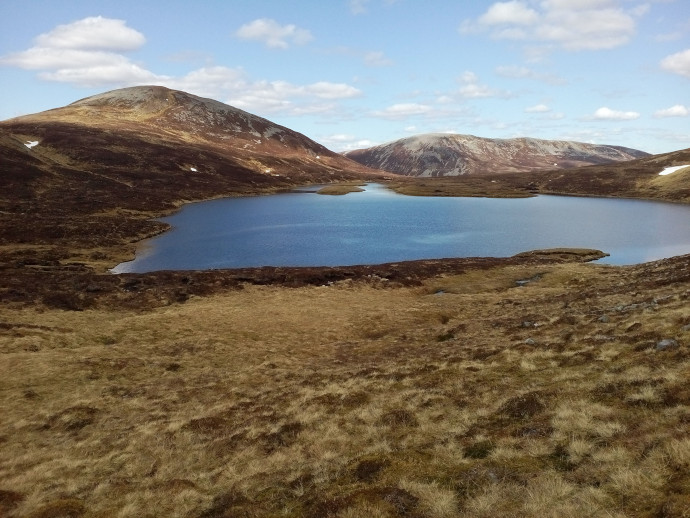 Beinn Iutharn Beag and An Socach above Loch nan Eun. Although the former looks to be (and actually is) higher, it's the latter that's a certified Munro Gleann Taitneach: the way back. ...am I the only one who looks at this and sees a fluffy blanket?

The redhead at the end of the glen above is Ben Gulabin. Depending on the time, I could add it to the walk, or simply carry on via Gleann Taitneach and then Glen Shee as the walk description says. I wanted to add the Corbett, but could only decide if I could afford to once I got to the appropriate place to make the decision: the confluence of Allt Ghlinn Thaitneich and its tributary, Allt Coire Shith. And I was still some 6 km away from it.

Nevertheless, the walk down Gleann Taitneach was a breeze. At first, the path got a little tricky and slippery as it followed Allt Easgaidh and its waterfalls, but once the flatter part was reached and the path became a track, the going was once again quick. I'd expected this part to seem endless, but the time to make the decision came faster than I thought - and that only skewed it more in the favour of adding Ben Gulabin to the walk. Some more, a little lower down A bonus waterfall I saw on the way down... I think this is Allt Aulich?

By Allt Coire Shith, the path marked on the map meant I originally thought of ascending past the allt into the corrie and getting to the summit from there. But given the foliage and how the slope in front of me looked (steep, but not inaccessible due to the gradient nor vegetation), I reconsidered and attacked the Corbett directly, hopping over Allt Coire Careful-with-Pronunciation and marching up the hill, reaching the summit with a little more than an hour left.

Or should you be? Careful, I mean. I couldn't find the word in any online dictionary, so I can't tell what it means nor how it's meant to be pronounced (which could signal that it actually is vulgar) - but jester's report calls Coire Shith the Corrie of the Fairies; quite the contrast in the meaning... Regardless of its name, though, I still don't regret not falling into the allt on the way up.

It was still May, but up on Ben Gulabin, I felt like I'd slipped into autumn

Up till then, I'd been walking pretty much non-stop for half a year (or 7.5 hours, depending on how you want to look at it), and especially thanks to the direct route up Ben Gulabin, I was starting to really feel it. The remaining time should've been more than enough to make it to the bus stop. Processing all that in my head, I thought, 'I could afford to take a break here. Rest for like 15 minutes. Maybe eat the snack I've been saving for the bus.' So I did. Then came the time to pack up and leave. And... I couldn't.

Such a thing had happened before. After a walk, my legs sometimes fell asleep on the bus or train back home, the uncomfortable feeling making me both look forward to and dread my stop. But I hadn't experienced it during a walk. Getting up, feeling like ants were crawling up the veins of my thighs and calves... the 4 km I had left to reach the bus stop (or 2.5 km if I rolled down the steep S slopes...) seemed much longer than the 6 km between Loch nan Eun and Allt Coire Shith. Objectively speaking, the route wasn't bad. I reached a good track and followed it down to the A93 and, well, walking along a main road leaves something to be desired, but it wasn't for long. Still, I kept wishing I could flag the bus down where I was, instead of going all the way to the stop.

So the last part left a sour taste, but until Ben Gulabin, the walk had been amazing. 'Until I sat down on Ben Gulabin,' I speculated on the bus. On trains and buses, I sat, and could get sleepy legs. On walks, even when I took breaks, I usually just slowed down significantly, or kept walking in circles, but stayed moving. But this time, on Ben Gulabin, I sat down. And got the sleepy legs. A theory and a solution were born. If a break is taken in the middle of an intense walk, don't do more than slowing down. Staying in one place can be okay, as long as you keep moving a few steps back and forth. But sitting down... ain't permitted!