With a new found love for Corbetts, I had stumbled upon Sgurr Innse and Cruach Innse in the middle of the Fort William giants. With the location being so close to the excellent Roybridge campsite, deciding on where to stay the night, was also an easy pick. With my tent set up, dinner made and a glass of wine I listened to the birds and cuckoo in the trees around me and was looking forward to the walk tomorrow. With my gear packed, I left the campsite just after 8am during the next morning. The starting point for the two Corbetts and the Grey Corries is the same, but since I completed the Grey Corries from Glen Nevis a number of years ago, I had never driven the road before. I had read that the road is not more than a farm track, but driving along it was mental. My average speed was 7mph, but the views made up for the bumpy ride. When the two car parks came into view, I saw a number of cars parked already, but managed to squeeze into a spot at the top car park. Setting off I passed the wee minister on the way and made my way up the plantation. The excellent path continued up hill and the sun was beating down stronger than I had expected. In no time I ditched my thick fleece and was walking in my T-shirt. Ahead the bulk of Cruach Innse was hard to miss...a rounded islands between giants. To find the spot where I had to leave the track, was also straight forward and easy to spot. The grassy slope was leading relatively gentle up the area between Cnoc nan Ceann Mora and Cruach Innse. From around 530 meter, it was a steep slog up the grassy hill site. 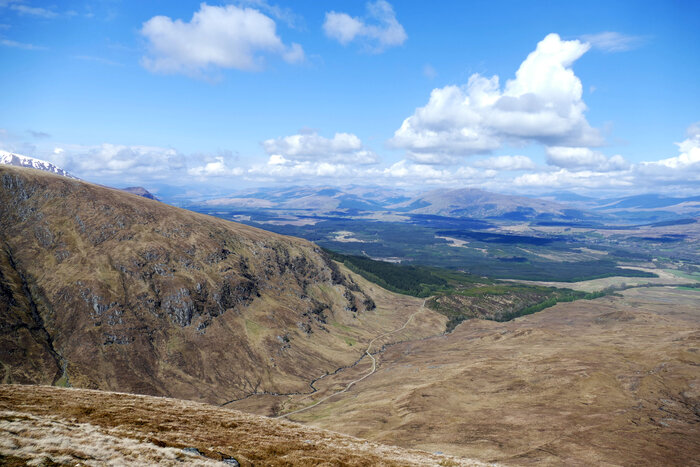 The way up looking back

The views however were stunning! The snow capped peaks of the Grey Corries were now in clear view and higher up the bulk of Ben Nevis could be admired. 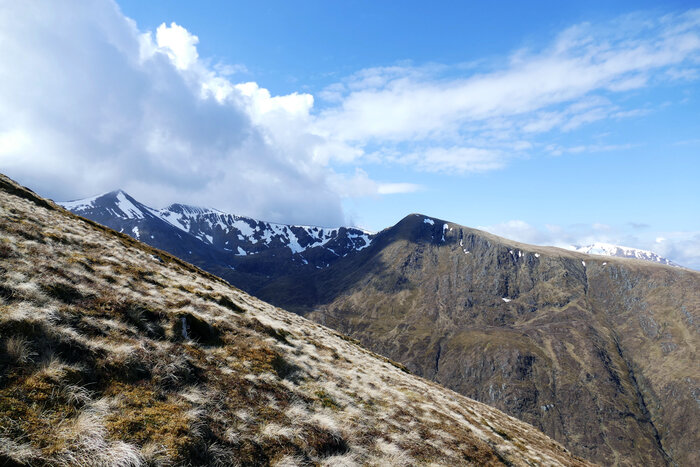 Views to distract from the steep climb

When I finally reached flatter ground, walking got easier and soon after I reached the first summit cairn of the day. To my left the Loch Treig Munros looked spectacular and to my right dramatic clouds loomed over the Grey Corries and made me wonder if the expected rain showers would appear earlier than I expected. A cold wind was blowing and I started to shiver...time for my fleece and gloves. 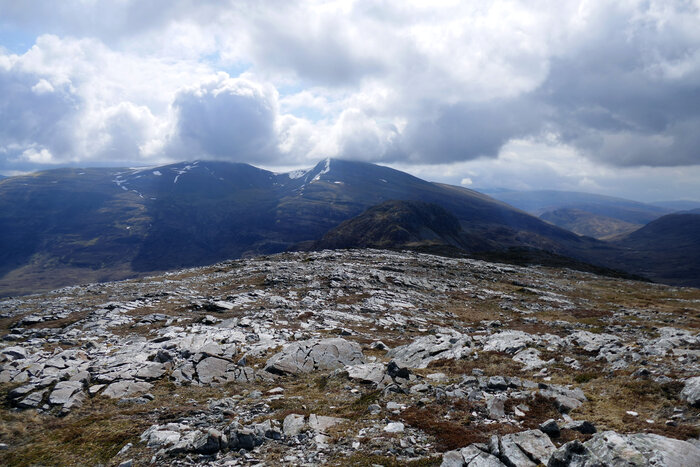 Sgurr Innse and the Loch Treig Munros ahead

I left the summit and walked towards Sgurr Innse which looked tiny from my position. The summit was a pleasure to walk along and a fantastic view point for any photo opportunities. At the end of the plateau I was glad to find the path, as the decent was steep and rocky. However with the help of the path, it was an easy undertaking and I soon reached the bealach. At the 605 mark I decided to have a break and eat my lunch, just in case it would rain later. Sgurr Innse looked quite dramatic and I was looking forward to the climb up. 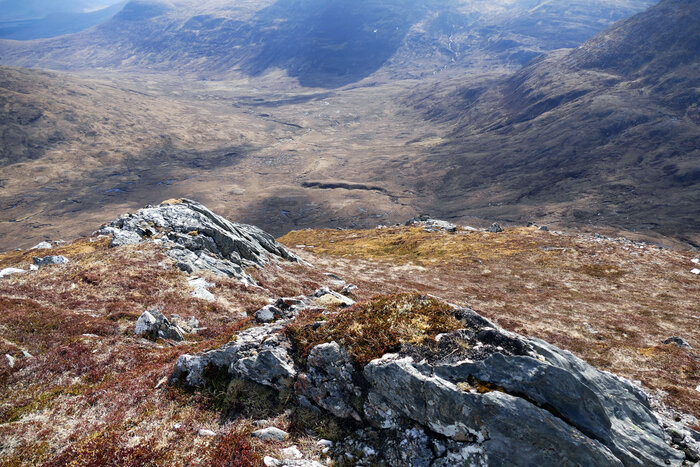 Trying to find the path down The bealach between the two Corbetts

With the sun beating down and not being in any rush I enjoyed the views while finishing my sandwich. A person I had noticed on my climb up, was on the approach and decided to wait to let him pass.

|When the other walker reached me we had a quick chat before he continued with the climb. I packed my bag shortly after and followed the steep rocky climb up the second Corbett. It was far easier than it had looked from the bottom, but careful path finding was required. I soon caught up again with the other walker. Like often when you meet another walker who walks a similar pace, we ended up walking to the summit together. During the brief chats we had on the way up, I had noticed that David (as he told me his name was) talked in a different way than I had ever encountered before. I did not had long to wonder why, as David explained to me that he was hard of hearing and could only understand what I said when he could see my lips.

He continued to tell me that he and his wife are members of the Deaf Mountaineering Club and that in 2019 he had completed the Munros and Tops and was also half way through the Corbetts.
Due to this achievement as a Deaf person, his final Munro had been captured in a short film made by the BSL Zone to encourage other deaf or hard of hearing people to take up hillwalking .For those interested you can watch it here.
https://www.ukhillwalking.com/news/2021/03/completing_the_munros_with_deaf_walker_david_thompson-72724 On the way up Sgurr Innse While David had his lunch I ventured out to take some photos around the summit area, before I joined him for a snack and some juice. As both of us that the same return journey, we continued our journey back together. The climb down Sgurr Innse required a lot of care, as more path seemed to lead down than I had seen going up. A few times we had to stop to discuss which way to take, but minus a detour we managed it back to the bealach and from there back the gentle slopes to the Lairig Leacach. 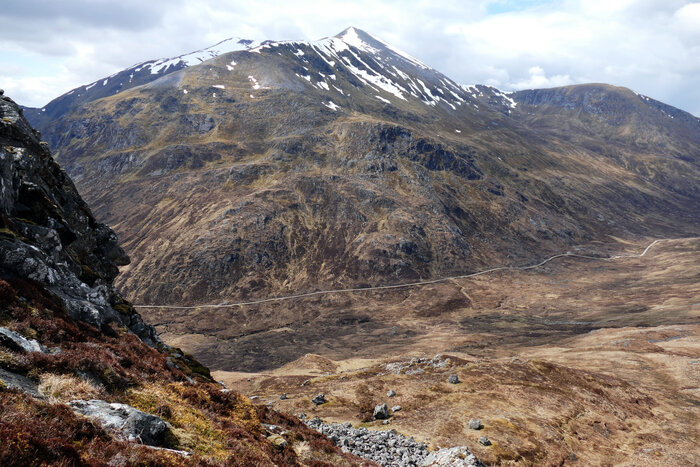 The view back to the path During the journey back I learned a lot about the Deaf hill walking community, his life in general being hard of hearing and the usual hill stories one ends up sharing with like minded people. Back at the car we thanked each other for the company and went home our separate ways. 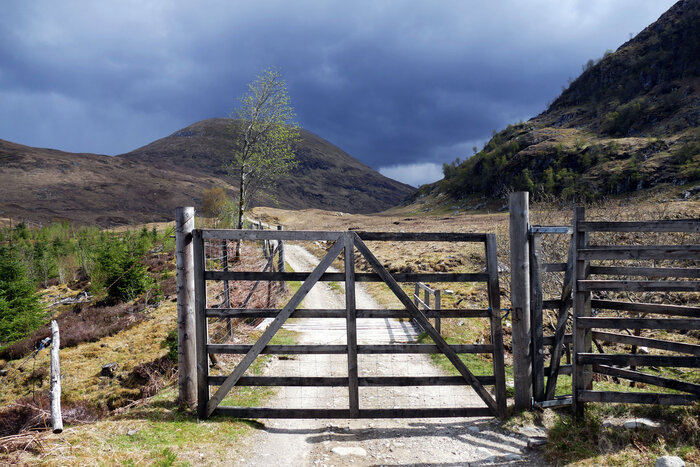 Sunshine after a brief shower

Since I am back I thought a lot about people with disabilities and how few, if any I had met during hill walks. If any deaf/or hard of hearing person reads this....take inspiration from David...if he can climb a Munros and Corbett, so can you.

For me he has certainly been an inspiration.

Hi, I know David will pass this onto him.

Many thanks for posting the information about deaf hillwalkers, and David's inspirational achievements. Your photos of the Innses are beautiful and very tempting (as ever

) but I was intrigued to learn about a deaf hillwalking community. I too am deaf, but not a fluent BSL user, I've gone deaf gradually since my teens so I've not really known enough people who sign to perfect the language. It's really encouraging though to see how well organised David and his colleagues are, brilliant

I always enjoy seeing reports and photos from this pair - takes me back to one of my favourite trips, bothy nights and reports from the early days! Great hills.

Inspiring read for some ( and me)
Been about 3 years or so since I drove that pot holed track. Actually thought they might have tarred it or something. Fancy these 2 this summer sometime . Ah well, slow careful drive again it shall be.
Cheers for the detailed report

David story is very interesting and the making of the film was good, now going to the iplayer to watch the full thing. Well done Mia and a great trip into these hills too.

Nice one. What superb weather. I've had a route for these planned for some years, but still haven't got round to visiting them. Sometime soon I hope!