Beinn Udlamain, Sgairneach Mhor, and The Sow of Atholl

Beinn Udlamain, Sgairneach Mhor, and The Sow of Atholl

Morning_Walk_.gpx Open full screen  NB: Walkhighlands is not responsible for the accuracy of gpx files in users posts
The weather didn't look great as mrs shanksi and I set off from layby 81 on the A9 with low clouds and a bit of rain. We'd decided to follow the route anti-clockwise as we both felt we'd prefer a steep up rather than a steep down (didn't quite work out that way) so continued up the main track until we reached the river coming down from the right and could see a narrow path heading up on the far side. It was a steep climb from there and the path fizzled out after a while, but visibility was improving and we were able to head up towards the small bump at 902m - we were being rewarded with some fine views in the direction of Loch Ericht and across to Sgàirneach Mhòr. We bypassed the first cairn and soon reached the large cairn at the top of Beinn Udlamain. From there we followed the path alongside the old fence line, meeting a few groups coming the other way and then headed a bit more East and picked our way across the boggy bit and up the other side towards a visible cairn and then round the top through a brief hail shower to the trig point on Sgàirneach Mhòr. Looking back past Coire Creagach

We followed the path above the snow at the top of the crags of Coire Creagach but decided to go with our optional plan of climbing the Sow Of Atholl so we left the path where a few other walkers were coming up, and made our own way down towards the south of the steep gully. This was a bit rough and soggy underfoot but not too bad and we managed to pick up a faint path for a some of the way.
The climb up the Sow itself was hard work on tired legs and seemed to go on and on, but we reached the fairly featureless top and were again rewarded with some fine views, North to Glen Truim and South down Glen Garry. 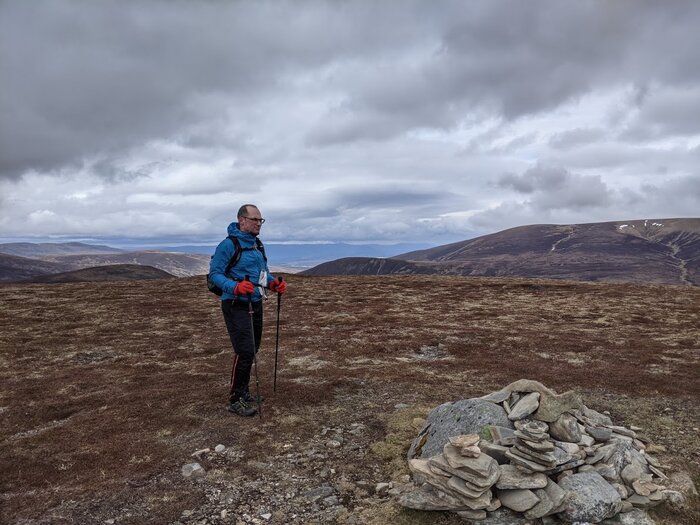 Top of the Sow of Atholl Glen Truim from the Sow

From there we headed North to descend towards the bridge over the Allt Coire Dhomain - a very steep heathery descent but not overly difficult - before rejoining the track back to our starting point.