By coincidence I found a copy of Isolation Shepherd in the library just before setting off to do these hills. It is about the life of a shepherd who lived at the top of Loch Morar in the years preceding the construction of the reservoir, and well worth the read before you go to the area.
There was already a queue of cars waiting at the gate when I arrived at exactly 9.00 am. It was a beautiful day (11 May) as I drove up the Glen - no surprise, as I now have the luxury of being able to choose when to go. Fresh snow had fallen the week before, and was still on the tops. Sgurr na Lapaich dominated the view: I planned to do only the cluster of 3 Munros lower down the glen, and miss out Fuar-thuill as I had big plans the next day and didn't want to overstretch myself - I've done it before so it didn't matter. Another walker was already disappearing up the track ahead of me. The track soon emerges into a higher glen, with views of Sgurr a Choire Ghlais which would be my third peak: 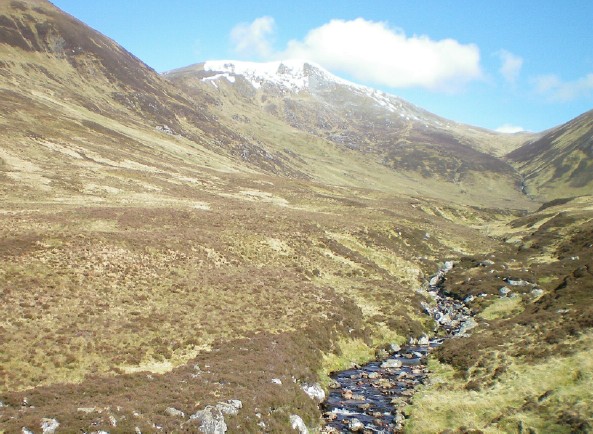 The walk up Sgurr na Ruaidhe is straightforward but in brilliant weather and with extensive views of hills etched with snow you can't complain. On top I stopped to identify the hundred or so peaks which presented themselves, from Nevis in the south to (I think) Ben Loyal just visible to the north. I continued over the second top without stopping and headed for the third and highest - Sgurr a Choire Ghlais. There was another walker ahead of me so I took a couple of pictures using him to give scale. We later had a chat on top, and he produced his route notes - printed from walkhighlands website of course. We spent some time on top identifying peaks and discussing plans. Like most of the people I met in the hostel and on the hills in those three days, he was getting close to completing the Munros - there is going to be a big jump soon in completed Munroists. Are they all going to be unleashed on the Corbetts? There will be no peace anywhere. Eventually I took a final look out westwards (looking forward to doing Lurg Mhor) and set off down the south ridge and back to the car. view west along the ridge to Sgurr Fhuar-thuill

That looked a cracking day out with some superb photo’s, you’ve captured the perfect combination of blue skies, white clouds, snow and mountains

bigbertie wrote:I found a copy of Isolation Shepherd in the library just before setting off to do these hills

I read isolation shepherd a few years ago, must get it again, it’s a book i could read over and over and never tire of.
My favourite story is the one of the stalker who takes his client out each day to shoot a deer, and each day the client misses. On the last day the stalker gets him so close he thinks he can’t miss this time surely, but he does, however his shot kills another deer some distance away he wasn‘t aiming at.

Great report Bigbertie. I'll look out for a copy of Isolation Shepherd

Lovely report bb, just great. A fine place it looks and the snow beautifully adds to the results of your excellent photos.

Superb report bigbertie – I love the pictures, they are cracking and so clear. The weather you had looks perfect

yeah, very nice. these are probably the closest munros to me, and ones im looking to get done very soon. have just had a wee search and bid on ebay for the book based on your recommendations.

Great report and pictures - those look nice... I'm surprised at how much snow there still is on those and the Mullardoch ones in your other report! I'm also surprised you managed to get good weather - I haven't seen any yet since Easter!

i love them pictures you have taken, no wonder scotland has so many poets