The target hill for today was Creag Bhalg but I half considered taking in Beinn a' Bhuird as well depending on the river crossing.

My starting point was the Linn of Quoich car park and with my £3 charge paid for the day's parking I headed back along the road towards Mar Lodge. I started early to try for some cooler conditions so was walking by about 07:10am. Spotted an adder just before Mar Lodge but sadly (for it) it had been flattened by a passing vehicle. 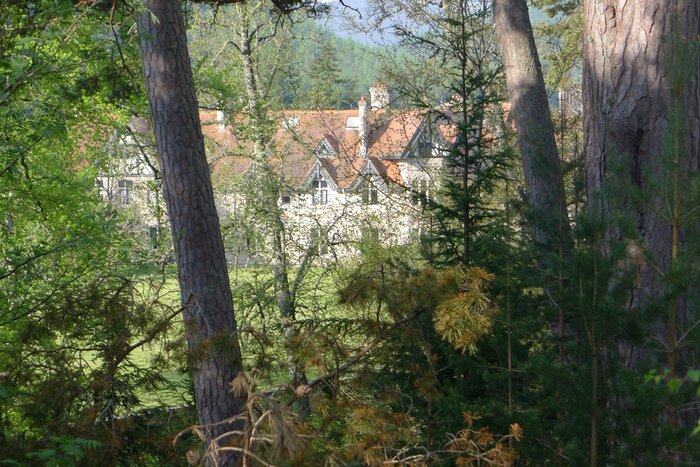 Mar Lodge through the trees

I knew my track taking me away from the road was close to the entrance for Mar Lodge but when I got there I decided the track I was looking for wasn't the right one so continued along the road till it became obvious it was the right one and I was an idiot. There was a grassy track heading straight uphill so took that in the hope that it reached my track - it didn't, so there was some unnecessary steep heather bashing to get back to where I should have been. The view opening up as I gain height

I quickly reached a crossroads and knew from other reports that others had gone right here then climbed through the heather to the top but I decided to keep straight on to see if there was any sign of a path to the top. Eventually I reached a point where there was a small cairn and the outline of a track heading up the hill. Leaving the main track and heading up Creag Bhalg

In the distance I could see what looked like a 6 foot post and when the track reached it it turned out to be a post with a small solar panel attached. From here it was just a short walk to the top on what was a really easy and gentle gradient. There are various groupings of stones on the top of this flatish summit so I took them all in (I don't want someone responding to one of my reports saying "Gordon you know that summit cairn picture you took, that's not actually the top

It was still warm on the higher ground but there was a nice strong breeze that was absent down at road level. After a few minutes of taking in the views I headed back down the same path with a quick stop to photograph this week's dead tree. Possible June entry for my 2022 Calendar "Dead Trees of Scotland"

It was now time to head along the track that links Glen Lui and Glen Quoich. The tree line is behind me and it is now open moorland and great views even on what turned out to be a very hazy day. Looking down in to Glen Quoich

It's around 25 years since I was last on this track so this came as a bit of a surprise. I think they were just around head height last time

In the same way as all dead trees must be photographed, so to must stacked timber - these are at the point where I reached the track coming up Glen Quoich. Now down on the floor of the glen the wind has dropped and it is noticeably warmer as I head along the track towards the crossing of the Quoich Water. Looking towards Beinn a Bhuird

On reaching the river it's obvious I can't cross unless on bare feet or accepting I will get wet up to my knees. Prior to reaching the crossing I had already decided that if I could get over on stepping stones or just slightly damp I would continue on to Beinn a' Bhuird but it was not to be (should have brought the old trainers). A few years ago I did Ben Avon and BaB from Keiloch so I have climbed the hill before but I think I'll come back again and do BaB from Glen Quoich as it is a beautiful looking walk in. Time for something to eat sitting in the sun by the side of the river. I don't normally stop for long but I could have happily brought a book and sat here for ages, a really beautiful spot. Anyway, time to head back down the glen but as can be seen from the next photos, always looking back at BaB. The walk back down the glen was easy going except for one steep climb near the end. It's steeper than it looks here The Tuesday after a bank holiday I expected the track to be busy the nearer I got to the car park but I only saw one couple walking, another couple on mountain bikes and looking like an overnight camp then finally a group of about a dozen mountain bikers. The car park wasn't that much busier than when I left it a few hours earlier.

This turned in to a really nice walk and much better than if I had just gone for a quick up and down of Creag Bhalg.

Re: Creag Bhalg - Then a bit of a wander!

Sounds an enjoyable walk. It's only this last year that I've really got acquainted with the southern Cairngorms but a lot of these foothills have pretty good views, this one being no exception.

Re: Creag Bhalg - Then a bit of a wander!