I was busy last week and no time to write reports, so apologies for the delay in posting... I have a huge pile of stories to write now, after our "crash holidays". No, the crash doesn't mean disaster in this case, just refers to our sidekick hobby of visiting plane crash sites on Scottish hills. In 10 days, we managed no less than SIX new crash sites, some were really mind-boggling experiences, with the large amount of wreckage and the effort we had to put into even getting to them. I will duly report all Panther's Aircrash Investigations on this forum, they all come with fascinating background stories. We also managed to combine some of them with bagging Sub'2 Marylins, killing two birds with one stone. Apart from that, we climbed 7 higher mountains (5 brand new, 2 repeats). It might have been even more wild, but I had my Covid jab last Thursday and suffered from sore and swollen arm, so sadly, cycling, wild camping and multi-day walks were out of question.

But before I write about all the lost planes and all the remote Grahams we reached, I must catch up with the backlog reports from late April/early May. So here comes the first of them - our visit to Beinn Ghobhlach on the 1st of May 2021.

Known as The Goat Hill, this attractive Graham is situated on the narrow peninsula between Big and Little Loch Broom, a perfect place for fantastic views south to An Teallach and north to the Coigach/Assynt tops. We had visited this hill before, in 2012, but weather was far from perfect on that occasion and we were more than happy to re-climb it and enjoy a longer break on the summit.

Our route follows the WH description (more or less). It is possible to add the neighbouring Cnoc'a Bhaid-rallaich (Sub'2-er) but we are saving this one for another day, possibly in combination with Beinn nam Ban.

Track_GOAT HILL 12.9KM.gpx Open full screen  NB: Walkhighlands is not responsible for the accuracy of gpx files in users posts
We started from the usual car park at the end of the minor road to Badrallach. It was quite busy despite weather not playing along:

We quickly got prepared and started marching down the nice path long Little Loch Broom. Forecast was for sunshine and snow showers (snow in May??? welcome to Scotland, have a nice day!

) but we hoped to avoid the bad spells of weather. In the morning, it was cold but dry and very quiet on the low level: 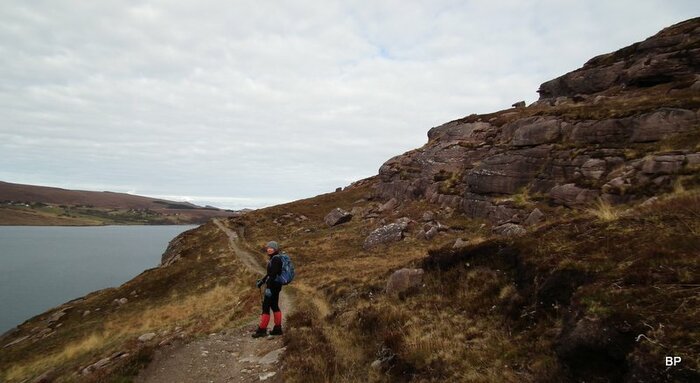 Sail Mhor across the loch: 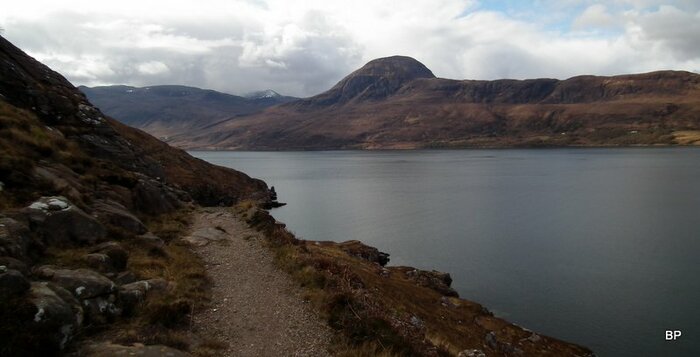 I remembered from our previous visit to this hill that we had left the path after about 2km and climbed straight up the wet slopes along Allt an Uisge Mhaith. Today, we did exactly the same. The slopes might be a bit squelchy, but not unduly steep and overgrown - something any panther can easily cope with: As we made our way up the initial steeper section, we discovered we were being watched! Beware strangers! We are watching you!

The best views at the beginning are towards Sail Mhor and along Little Loch Broom, but as soon as we reached the flatter section at about 300m, we saw "our" hill in its full glory - and I couldn't hide my excitement!
Beinn Ghobhlach, here we come! This Graham is famous for a large population of local lizards. One of them actually tried to climb up Kevin's leg

Others were a bit more shy, hiding in the grass and amongst rocks. Lovely wee creatures We wondered, why is this hill called "mountain of the goats". Perhaps because of a large number of feral goats living nearby? I know it sounds funny, but we never saw feral goats on this side of Little Loch Broom, only on Sail Mhor and An Teallach. Maybe we should re-name Beinn Ghobhlach to "the mountain of happy lizards". Whatever it is in Gaelic

Personally, I have a much batter alternative name for BG, just looking at the shape of the twin tops:

Behold the Tits of Valkyrie! Jokes aside, the climb up Coire Dearg didn't present a big challenge to us. It is steep but not drastically: Despite having been here before, we were again gobsmacked by the superb vistas from the main ridge of this Graham. There was plenty of weather around us, mainly above Ben Mor Coigach, but we had avoided the showers so far and hoped it would stay this way!

Sail Mhor and An Teallach, the latter still with a thin layer of snow:

We took a short detour to the northern top, where we spent some time resting by the cairn, then embarked on a lengthy photo session, taking advantage of the good light and the weather fronts passing on both sides of "our" hill.

Ready to continue to the summit of Beinn Ghobhlach:

The northern cliffs of this hill are so steep you can pose for some very spectacular photos like this one, called "Kevin's life on the edge" Beinn Dearg (the Ullapool one) still in winter conditions:

More life on the edge with Kevin in the foreground There may be no goats on Beinn Ghobhlach but wildlife is aplenty, including ptarmigan: Looking west into the upper Coire Dearg, the Graham summit to the left:

The final, quick push took us to the summit - a fantastic viewpoint! It was a new Graham for Lucy and she couldn't resist a wee pose: 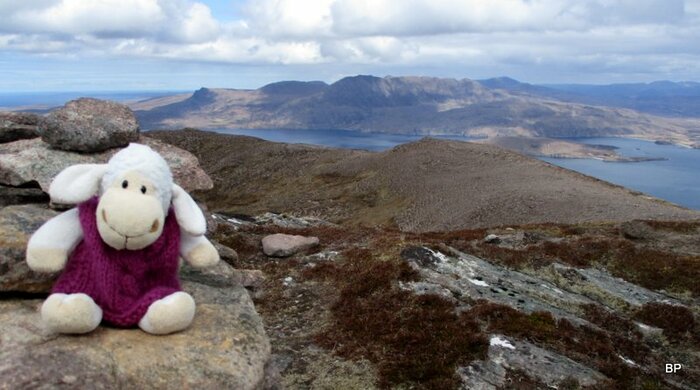 An Teallach and Sail Mhor again: Zoom to some Fisherfields (I think these are the twin Corbetts Beinn Dearg More and Beag, our next target in this area and behind them, A' Mhaighdean): We had our lunch on the summit, enjoying both the views and the dry weather (all showers missed us - that's called luck!); to descend, we dropped carefully towards Loch na Coireig and Loch na h-Uidhe: Down by the lochs, we picked a faint path across the moorland:

Beinn Ghobhlach from the other side of Loch na h-Uidhe: 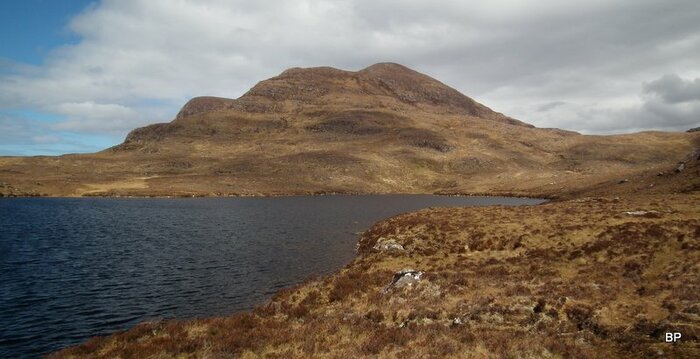 The final descend was, as I recalled, down a steep, gassy gully which we found without any problems. To our surprise, we met a pair of curious deer, looking suspiciously similar to the duo scrutinizing us earlier at the start of the climb. Could they be the same ones? Were they guarding the mountain and watching us all the time? 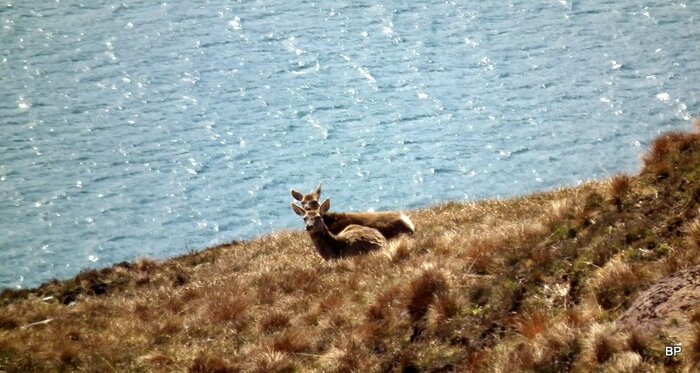 Ha-ha! We know who you are!

We walked a few meters away and they didn't even move, just kept staring at us. Spooky!

Having left the scary deer behind, we followed the gully down to the Scoraig path: 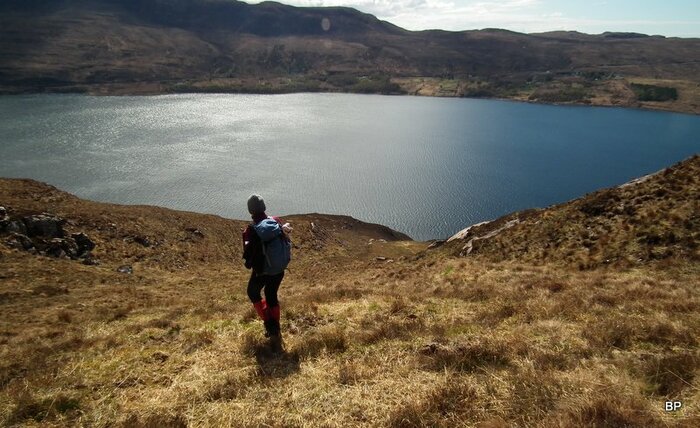 We met several groups of walkers down on the path, which is a popular low level walk. I'm surprised this Graham is not more popular, considering how great the views are, but maybe it is for the better that there are places in Scotland the beach brigade hasn't reached yet. Though on this occasion, any beach activities would result in loud teeth chattering!

My next story covers a great cliff walk combined with a Sub in a bag. More unsettled weather about! TR to come soon.