I was a bit worried about this hill, partly because the amount of descent involved from and back to Arienskill added to the hill itself might make it painful for my arthritic knee, and partly because other people's blogs and the SMC guide didn't inspire too much confidence about the river crossing in the woods. I thought it might be useful to do the hill before the bracken grew tall, and we just managed this.
It was an overcast day when we set off from Arienskill. Recent work by the railway line has improved the path under the bridge (no stepping stones as per SMC guide), but a large fence including a padlocked pedestrian gate has been placed at the start, meaning that one has to negotiate an unnecessarily thin path to the side of the fence. Just a little more space or an unlocked gate would have shown more consideration for walkers. It wasn't difficult, just unwelcoming. Once we located the path up the side of the burn, progress was straightforward, with occasional reference to the GPS when the path disappeared into the grassier patches. 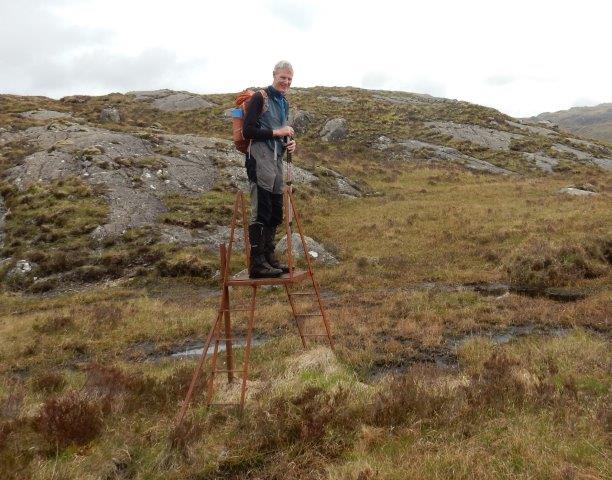 We made our way to the start of the steep path down into the trees. 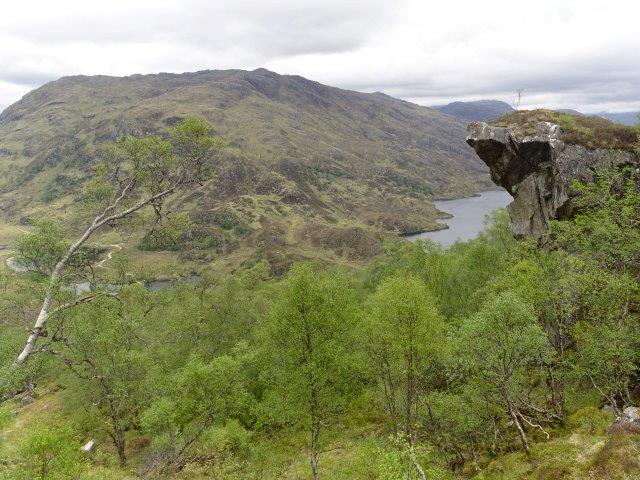 Start of the steep wood, looking towards our hill

We descended into a very atmospheric woodland where we found Prince Charlie's Cave. 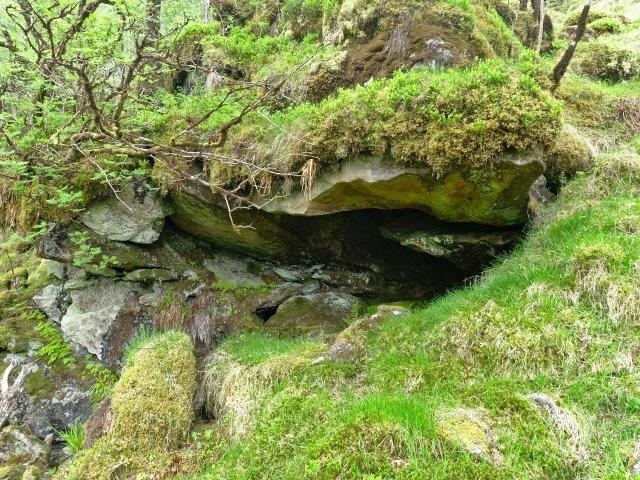 Thereafter the path was less obvious. We arrived at the stony bed of the burn and crossed, spot on with the GPS. It really wasn't obvious how to get out. The SMC guide states 'it is important to cross at the correct level' and mentions narrow ledges. We found a narrow ledge and followed it before scrabbling steeply through gaps in the rocks, it didn't feel like a path and I'm sure I had a close encounter with tick-filled grass, but it looked as if one or two other people had gone that way. We have absolutely no idea whether we went the best way or not.
That difficulty over, we made our way down to the hydro works, on and off a path, crossed the first bridge using only the outside planks (the middle one wobbled), and arrived at the track from Meoble. 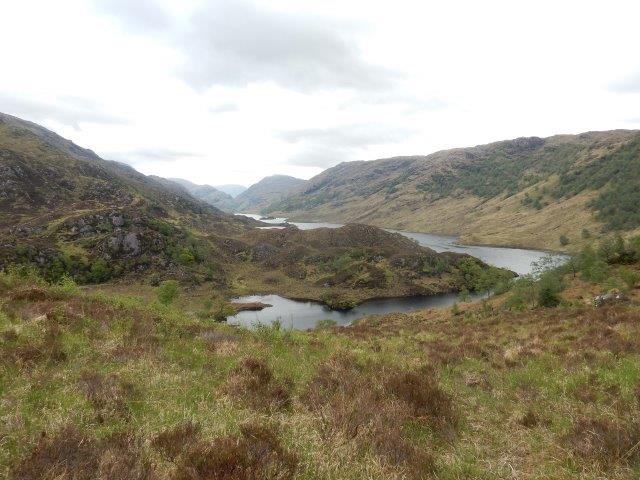 Once we started uphill, it was fairly straightforward to follow animal tracks and grassy patches up the steep ridge, then to make our way from one rocky bump to the next - there were a lot of these. 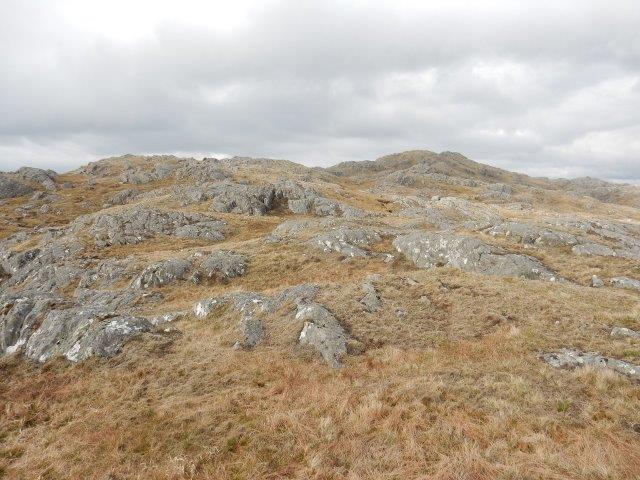 Past the steep bit now

Eventually we arrived at the 660 top then headed to the summit. 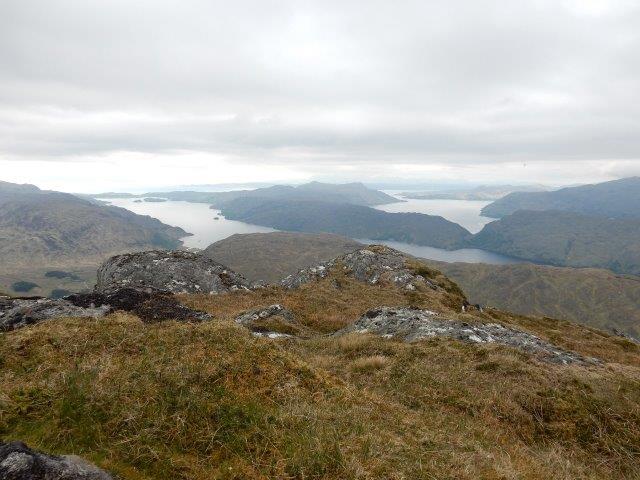 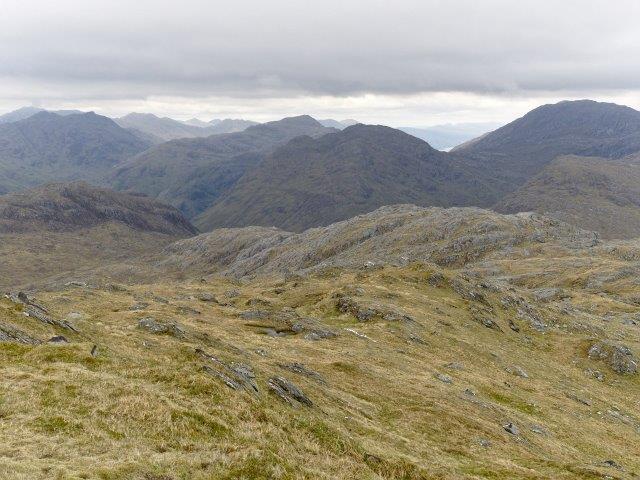 The north east ridge, and hills beyond

We returned very much the same way, avoiding a few of the bumps, and on the re-ascent from the loch we avoided the tree-filled gorge by heading straight up the hillside to the line of the upper track. 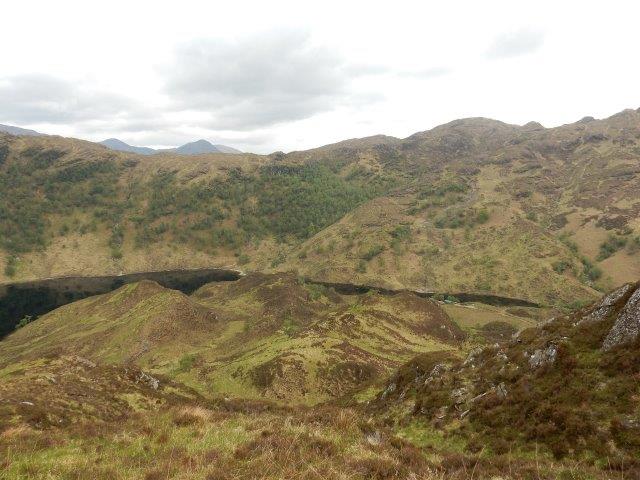 The phrasing 'line of the track' means that it wasn't that obvious where the track was for a lot of the time. GPS or intuition was used to find and follow it. From the high point it was easy walking across the moorland, sometimes on a path, until we located the clearly defined path for the steeper part of the descent.
So, not at all as bad as feared, the knee was ok, the little wood was lovely, we got out of the gorge and didn't need to go back in, Loch Beoraid was attractive and abandoned, and the hill itself satisfyingly remote with plenty of bumpy craggy bits for added interest without causing a problem. And the clouds were above the summits. Don't ask how many ticks I collected.

Here is our approximate outward route.