Lovely Ciche - even nicer than it sounds!

Lovely Ciche - even nicer than it sounds!


Covid lockdown #2 finished. Had done a few hills here and there by now. This was to be a much tougher test, but hills I had previously viewed with admiration and a desire to do on a good day. This looked like a good day, especially as Big Jasper and Lawrence, were onboard, too.

Not much to say about the road along Loch Arkaig that hasn’t been said before, other than my warnings failed to slow Jaf down, but the road succeeded 😊 The views down the loch are just superb. Well worth a visit, whether one is a hillwalker or, not. Stag enjoying the sun. Streap, at the back. A braw looking Corbett, just 5m below Munro height.

We made good haste on the track out to Upper Glen Dessary, passing many disinterested deer along the way. I presume they are fed at times? Anyway, made a bit of a faux pas here, by passing on by the property which is being renovated, not taking the track to the right, which is reached just beforehand. Progress was still speedy along here, so it wasn’t much trouble to divert north up the side of the forest and join the WH’s track. Again we had strayed a bit off line reaching the Allt Coire nan Uth, which was easily crossed and having done so, we could see the footbridge well below our track, which seemed well trodden. There’s generally pretty clear track all the way up the steep, steep slopes of Sgùrr nan Coireachan. Relentless, is one word for it. We had many others 😊 It put us in mind of Ben Vane, down near Arrochar.

The slog was worth it, however as the views all round opened up! Superb, though the lads were finding it a bit chilly. Me, having put on shorts, just had to grin a bear it 😊 Now, how do we get off of here? A very, very steep descent to the Bealach Coire nan Gall, that’s how. Increased caution and concentration required. Jaf and Lawrence, on No.1, Sgùrr nan Coireachan, a right wee, toughie. The drop off Sgùrr nan Coireachan is steep! Probably, no definitely a lot steeper than it looks.

I think we all enjoyed the traverse of Garbh Chioch Bheag to the bigger Garbh Chioch, undeterred by some steep, rocky ups and downs and marvelling at yet another skilfully crafted, drystone dyke in the middle of nowhere, though of course, in former times, this wasn’t nowhere! More superb views and photo’s to be had. 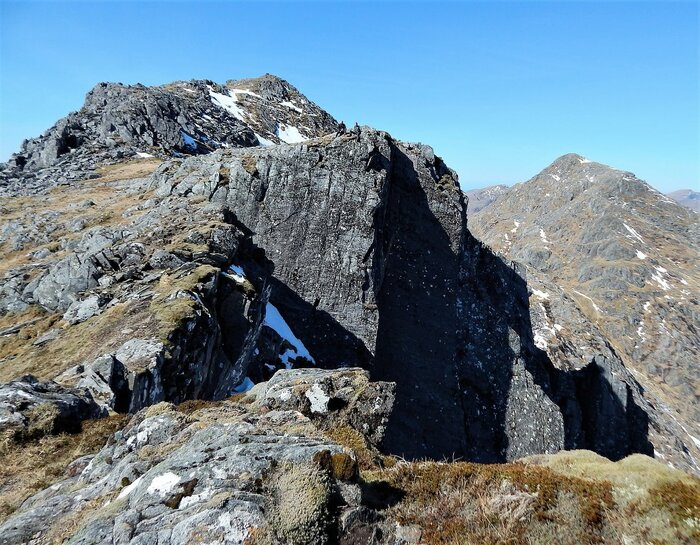 Lads have a wee breather heading up Garbh Chioch Mhor. Me, summit, GCM. Just about managed the shorts and t-shirt all the way round, tho was more than a bit chilly at times 🙂 Lawrence enjoying the view. Eigg and Rum, beyond Loch Nevis. Drop off GCM, just made a little more tricky by some hard-packed snow, but the axe I carted round wasn't required.

I think it was here, that Big Jesper realised he had misunderstood one of Lawrence’s directions and we weren’t now heading for Ladhar Bheinn =D Again, we keep to the dyke, down to the bealach, Feadan na Cìche. No whistling of the breast, but it didn’t stop that pair looking 😊

By now there was a few others around, obviously doing the circuit the wrong way, as they were going the opposite way from us 😊 Although it looks challenging from a distance, we found the ascent straight forward and surprisingly easy, despite some loose scree, big boulders and the occasional patch of snow, here and there. No need for my axe, except to protect me from that pair 😊 Sgùrr na Cìche, one of the finest Munro's, but relatively easy ascent from the bealach. Getting to the bealach, relatively hard 🙂

And there we were, on the summit of Sgurr na Ciche. Fantastic, especially the views of Loch Nevis, Beinn Sgritheall, Eigg and more. After the usual photos, it was back to the bealach and down the narrow ravine, of Feadan na Cìche. No jogging down here! Bit tricky, with some easy scrambling, but good fun and again, not problem on a day like this. The Cuillin, black and red. Out to Ben Nevis and neighbours. Looking back up the narrow ravine, of Feadan na Cìche.

Left hand turn onto SE bearing, onto bits of path here and there, before dropping onto clearer track, then joining the very boggy path from Sourlies. We then kept to the higher path which skirts above the forest, back to Upper Glen Dessary. The main thing we noted was what we thought felt like a very long hike along the side of the forest, up and down, thinking the next bend must be the last, but no, on it went. Even the deer turned out to see we went home. 😊

Again, we took a diagonal route to follow our inward track, then onto the road from Upper Glen Dessary. We kept up a good pace despite some fatigue and made it back to the car in nine hours. Might have saved some time on bikes, but we’ll never know 😊 Anyway, what a great hike and we were treated to even clearer and calmer views of the loch, as we made for home! Smoke from hill fire/s in Knoydart, drifting into Glen Pean, as we head for home. A beautiful part of our wee world, for sure.

One other thing. When driving back out, remember to adhere to the last sentence in the WH’s description. Ain’t that right, Jasper